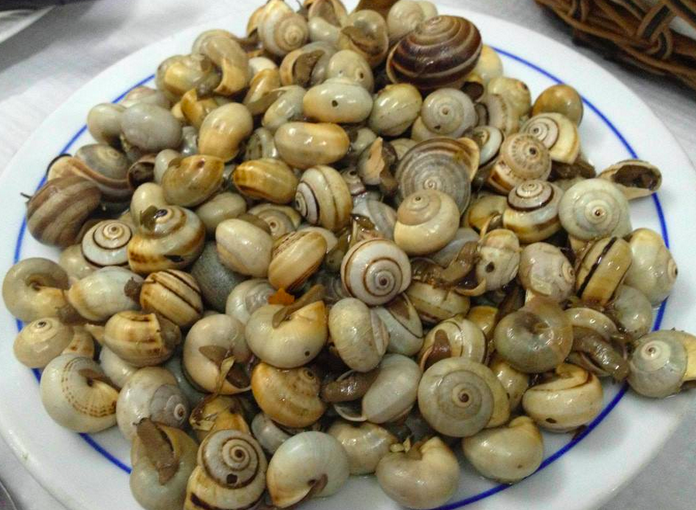 I am not proud to say that sometimes I freak out when it comes to trying new foods. Don’t get me wrong: I have come a long way and traveling around the wold has trained my mind and palate to be way more open to new experiences than before. Still, sometimes, the looks of some creatures don’t do it for me.

This doesn’t necessarily happen in exotic far away countries: in my own homeland, Portugal, I have recently put slimy prejudice aside to try one of Lisbon’s most beloved summer delicacies: SNAILS!

My friends were telling Ashray that he should definitely try snails as it’s such an iconic thing in Lisbon during the warm season… and then were shocked when they found out that I, having lived in Lisbon for so many years, had never had them before either!

We put an end to all of this non-sense on a Lisbon summer night, and tried snails for the first time:

Actually, they taste mostly like the ingredients they are cooked with. They taste like fried onions, garlic, tomato and oregano. With a slightly textured tiny piece of meat involved, that is, the actual snail.

The typical serving of Portuguese snails involves smaller creatures than the famous “escargot” in France. If you’re into chunkier bites like those, you’d have to order “caracoletas” in Portugal. We’ll leave those for next time.

Where can I eat Caracóis in Lisbon?

Snails are readily available in many restaurants across Lisbon and Southern Portugal, but they are a seasonal treat. During summer, you’ll see small restaurants (locally known as “tascas”) advertising them. It’s also likely that you’ll simply notice locals having them as appetizer or afternoon snack in tascas and cafes, along with local beer or wine.

A serving of caracóis is fairly affordable. If you’re not sure if you’re going to like them, ask for a pires (plate) instead of travessa (serving plate). The serving on the photo above is a pires and it cost less than 5 Euros.

I can’t say I’m eagerly waiting for next summer to indulge in caracóis in Lisbon. But the truth is that they were not half bad either. Taste buds and mind can be trained and educated. Just three years ago, for example, I didn’t like curry – and I appreciate it and even crave it often now. Maybe in a while I’ll be ready for the big caracoletas… who knows!

Have you tried snails before?

Get Lisbon in 100 Bites and learn how to eat in Lisbon like a local!