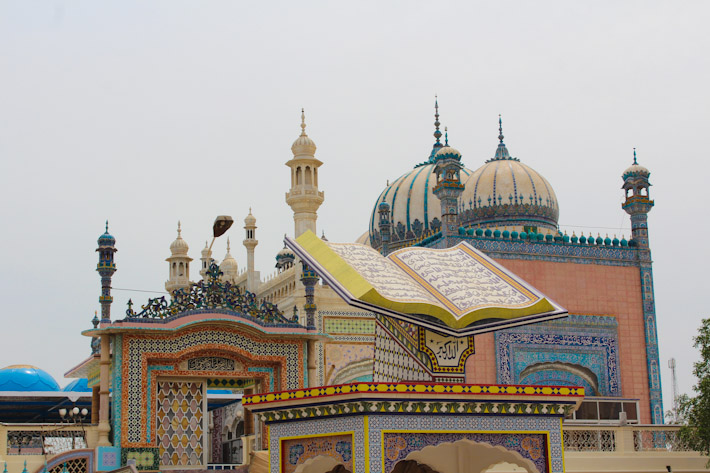 The really really pretty Bhong Mosque is in the small village of Bhong, about 50 kilometres from the city of Rahim Yar Khan in the south of Pakistani Punjab. It is something of an icon for the local region, whose unique Saraiki culture is often forgotten between the economic powerhouses of Karachi and Sindh, and the culturally dominant Lahore and Punjab. Mysterious enough being as isolated as it is, Bhong Mosque is also the centre of several mysteries and rumours. Legend has it that the owners of the mosque – wealthy local landlords – witnessed a death in the family after a halt of its construction. Another family member allegedly died upon the building’s completion, giving rise to a superstition which holds that a break in the construction brings about an untimely death in the family. Redecoration is said to have began immediately, to ward off any other bad fortune, and continues to this day. The result is an elaborately styled mosque whose owners are constantly looking for ways to maintain the decoration and redecoration of the building.

Since leaving Bhong, I have been informed that this legend is just that – a legend. However standing at the Bhong Mosque it’s easy to see how the rumour got started. Despite starting construction in 1932, it still boasts workmen and artists working on the exterior paintwork. The bulbous domes, the intricately carved arches and the high walls are all covered in an extravagant and outrageous riot of colours; red, pink, orange, blue, green; they’re all here, creating the impression of a kaleidoscope more than a house of worship. The not-huge interior of the mosque building is like an homage to superlatives; if the outlandishly luxuriant lifestyles of Dubai’s glitterati were expressed in a mosque, then this is what it might look like. Walls crafted out of marble brought from Multan and India, and worked on by craftsmen from Rajasthan. Huge carved teak doors bear wrought iron handles shaped into the name “Muhammad” as spelled in Arabic calligraphy. Glazed tiles, jewels, mirrors dot the ceiling, from which elaborate glass chandeliers hang. The entire Qur’an transcribed in miniature on a single sheet of paper. The entire Qur'an, written in miniature on a single sheet of paper It might be tempting to criticize the mosque for being so lavish when the town of Bhong (and much of the local region) is quite poor, however on the contrary, the ongoing construction and refurbishment of the mosque has provided jobs for generations of local artisans and labourers. In 1986 it received the Aga Khan award for Architecture for its “use and misuse of signs and symbols” which “enshrines and epitomises the popular taste in Pakistan”. Marble work on the interior of the mosque

No, Bhong is not a perfect structure, and its far from understated, but it is very beautiful and very remarkable in both aesthetic and fable. Tim Blight from UrbanDuniya is a writer, traveller, amateur photographer and teacher who splits his time between Lahore and Melbourne.

UrbanDuniya features travel and lifestyle stories and photography from Melbourne, Lahore, Sydney, Chennai and around the world.

Have you seen something amazing during your travels? Write about it and we’ll publish it on Backpack ME. Get in touch with us!