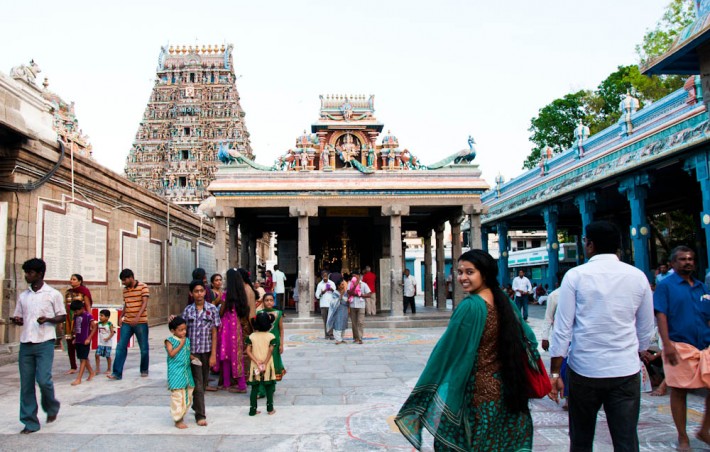 Before going to the state of Tamil Nadu, in South India, all I knew about it would pretty much boil down to this – Benny Lava:

OK. Maybe this is not completely true. But I find this video so hilarious that I just couldn’t help but sharing it with you!

I did know some Tamilians before. I had an idea that people in the South eat (even) spicier food than in the rest of India, women seem to be more empowered in general than in the rest of the country and that, same as their neighbors from Kerala, Tamilians have a great tendency towards going abroad. No wonder I had met some of them before, while living in Dubai.

Jalebis and the Spice of Life!

Going to one given place in India and claim you’ve seen or know this country is like eating an apple once and say you know tons about fruit. Not only India is extremely vast when it comes to its physical extension, it is very rich as well in terms of traditions, beliefs, local costumes and ways of life. And so we had to go to the South, and learn a bit about those differences.

To took a Spicejet flight and felt that, yes indeed, we were in India! Where else in the world would an airline have a fleet of airplanes where each plane is named after a spice? Only in India!.. 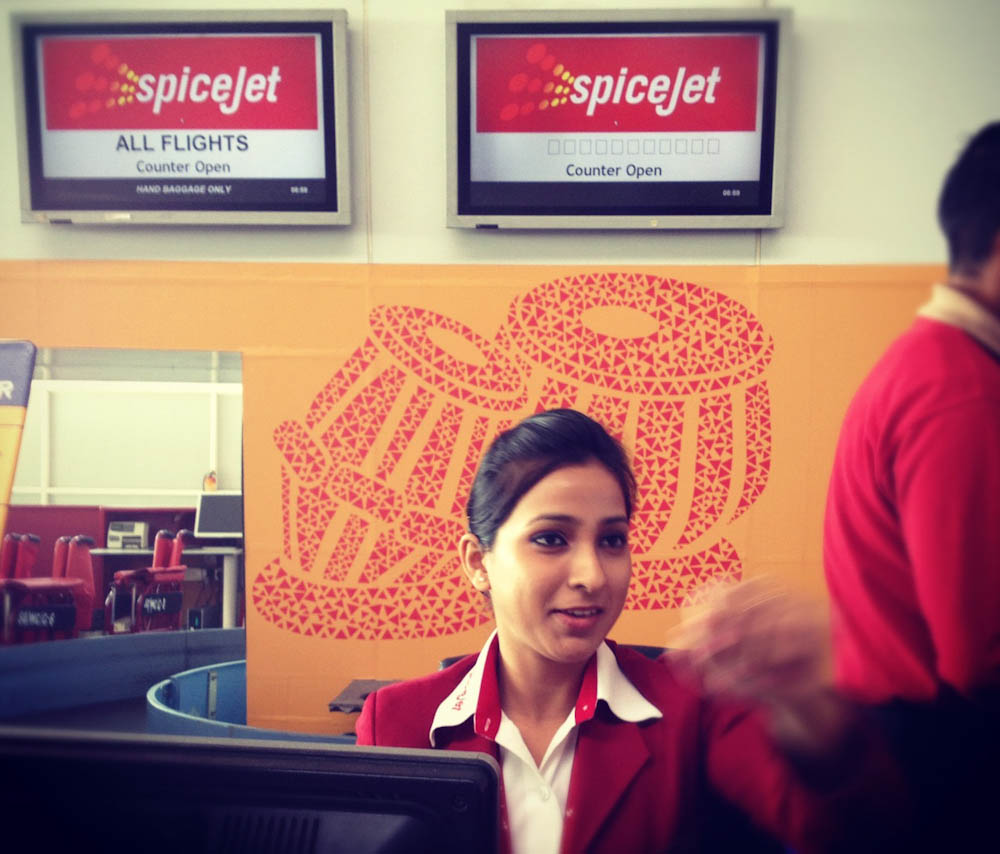 Checking in with the spiciest airline on earth!

Landing in Tamil Nadu, and even inside the flight itself, I noticed that Tamil language sounds like something that goes round, and round, and round! Like Ashray would say, Tamil sounds like jalebis (the popular Indian sweet)! This is the funny thing about being in India: you might go somewhere within your own country and actually not understand what people are saying there! Isn’t that strange? Tamil and Hindi are totally different: they sound like two worlds apart and, on top of everything, each language has its own script as well. In the South people don’t speak English as commonly as in the North, but some do. Basically, still within India, my communication capacity with the locals was pretty much as the same level as Ashray’s! Tamil vs Jalebis = both win!

Although it’s undoubtedly captivating for an outsider’s perspective that India offers such cultural variety, this can represent a problem when it comes to the unity of the country: how can North and South get along when they don’t even talk the same language? They do get along for the most part, but no wonder many people have regionalist tendencies. There’s probably more differences between regions of India than amongst countries within the European Union itself.

An Intro to Hinduism

In Chennai, we visited the most eye catching Hindu temple I have been to so far. Around the buzzing Mylapore tank area, where vegetable and fruit vendors concentrate, people get offers for the gods they are about to pay tribute to, inside the Kapaleeswarar Temple. 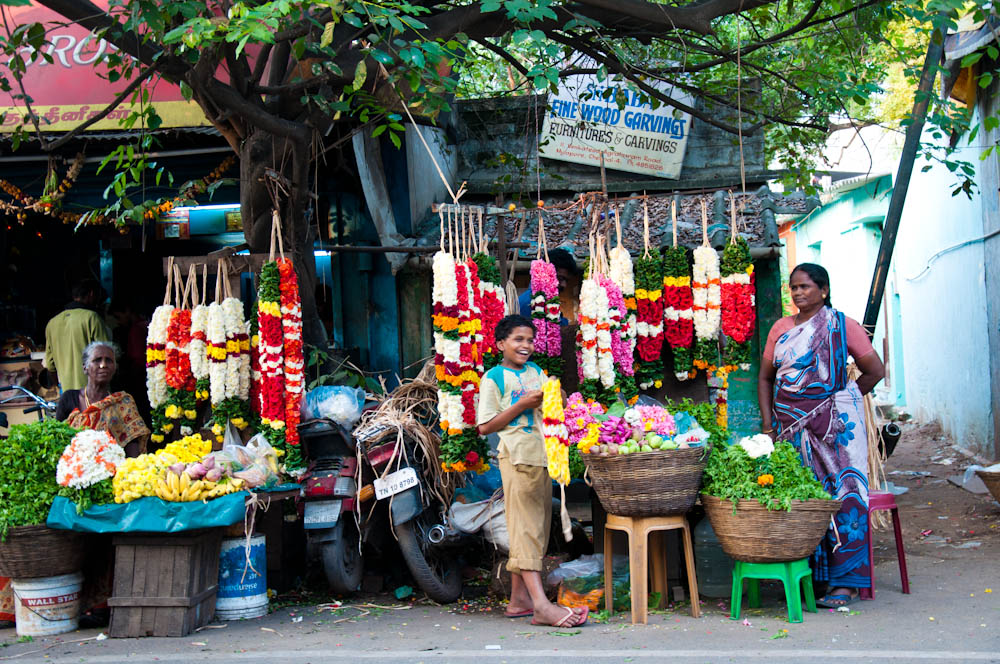 On the way to the temple, people sell offers for the Gods

Leaving our shoes at the door, we also joined the weekend crowd of devotees, not to put ourselves at the Gods’ feet but to instead look up at the figures decorating the rooftops of the buildings within the temple area, and marvel at such colorful and detailed religious representations.

Kapaleeswarar Temple and a detail of deities represented 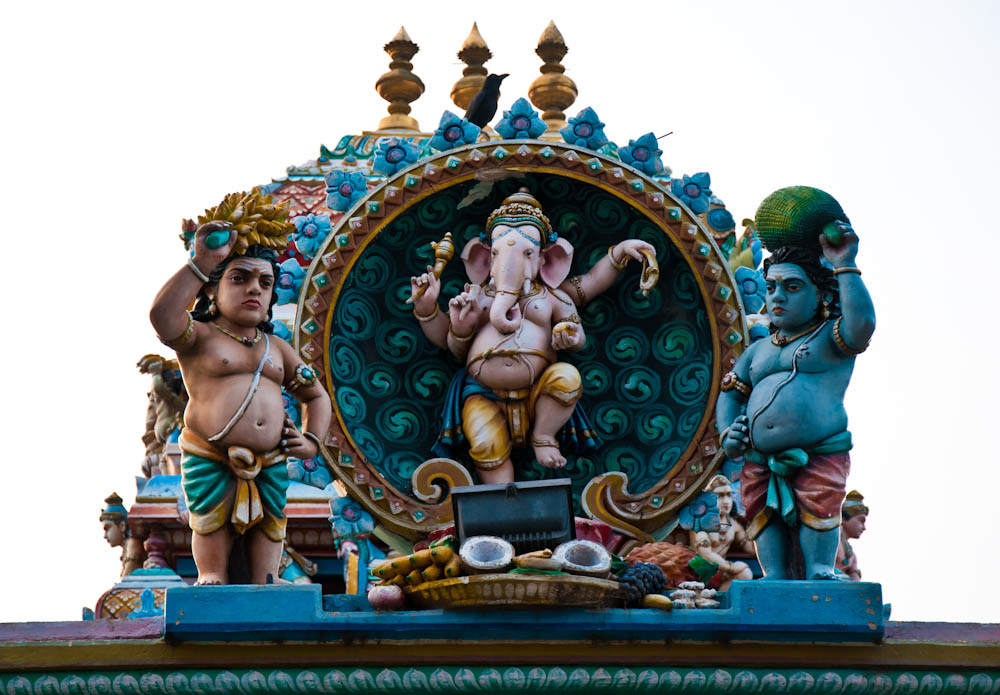 Lord Ganesha – with his elephant head and cute representations, he's probably the most "pop" of all Hindu deities 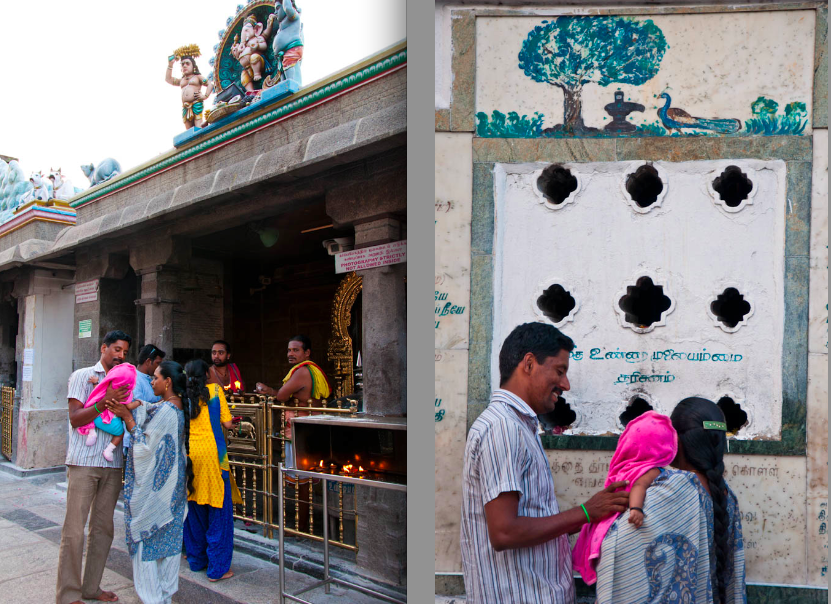 A family getting their baby child blessed

Hinduism is different from most religions I am familiar with. Instead of being just a religion, with a strict set of rules to live by and DOs and DONT’s that might grant you (or not) an afterlife in heaven, seems to be more of a blend between religion and philosophy of life. The myths and stories that gather under the gigantic umbrella that is Hinduism are never ending. Some say that 330 million gods “exist” in Hinduism! When you think that India is all about huge numbers in population, that sort of makes sense. Although some scholars believe that there are only 33 gods and the “million” word added afterwards was a misinterpretation in one of the texts followed by Hindus.

In the middle of the crowd, some manage to find their little corner of peace and spirituality

Whether there are 33 gods or 330 million, the truth is that even when it comes to choosing your favorite god, Hindus can’t all be the same: people will pray to different deities depending on the region of India they come from, the purpose of the pooja (prayer) or occasion. 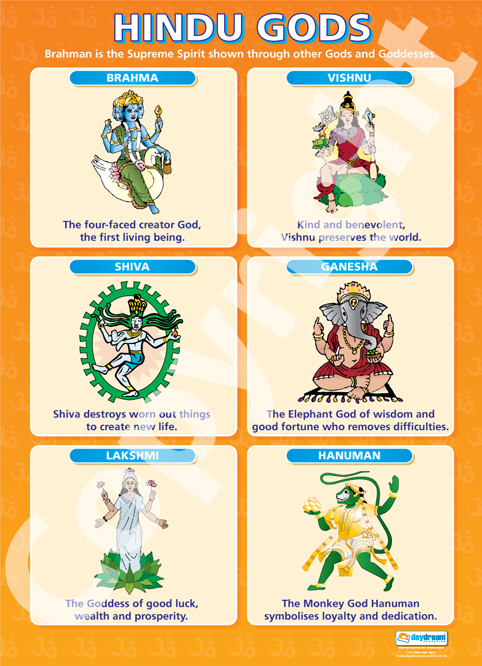 Kapaleeswarar is a 7th century temple dedicated to Shiva, a Hindu deity considered “the Destroyer” or “the Transformer”. The most common representation, depicts Shiva with blue skin. If you’ve seen Slumdog Millionaire, you might remember the kid that is running in the Mumbai slum at the beginning of the film. He is painted blue because he is dressed as Shiva (probably for some festival – it’s not like kids do this everyday!). 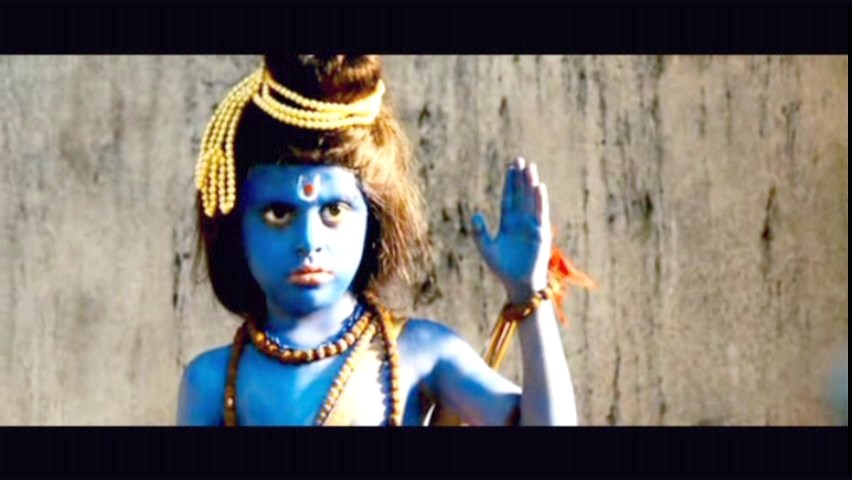 After spending some time at this Hindu place of worship, we moved forward to Ramakrishna Math, a Universal Temple. Sri Ramakrishna was a man with strong spiritual virtus. Although he started developing his spiritual side inspired by Hinduism he took his spiritual life to a whole other level. Not turning his back towards Hinduism, he started exploring the idea of God simultaneously through other religions such as Islam and Christianity, and believed in Buddha and Sikh gurus too. Always in search of God, Sir Ramakrishna’s motto was “as many faiths, so many paths”. For him, God was everywhere.

The Chennai Math of the Ramakrishna order we visited is a place where all faiths and beliefs are welcome. I am not exactly sure if my agnosticism was also welcome, but I made myself comfortable anyway. I couldn’t feel any less identified with Sri Ramakrishna, believing in oh so many gods, but I do admire this notion of unity and harmony between religions. Some think money spoils the world, but sometimes I think that religion comes side by side with money: how many wars and fights have been born out of differences in beliefs? Way too many. If religion must be a part of our lives, at least let it be in harmony with each and every other different religion. Kudos to Sri Ramakrishna for believing in happy coexistent. 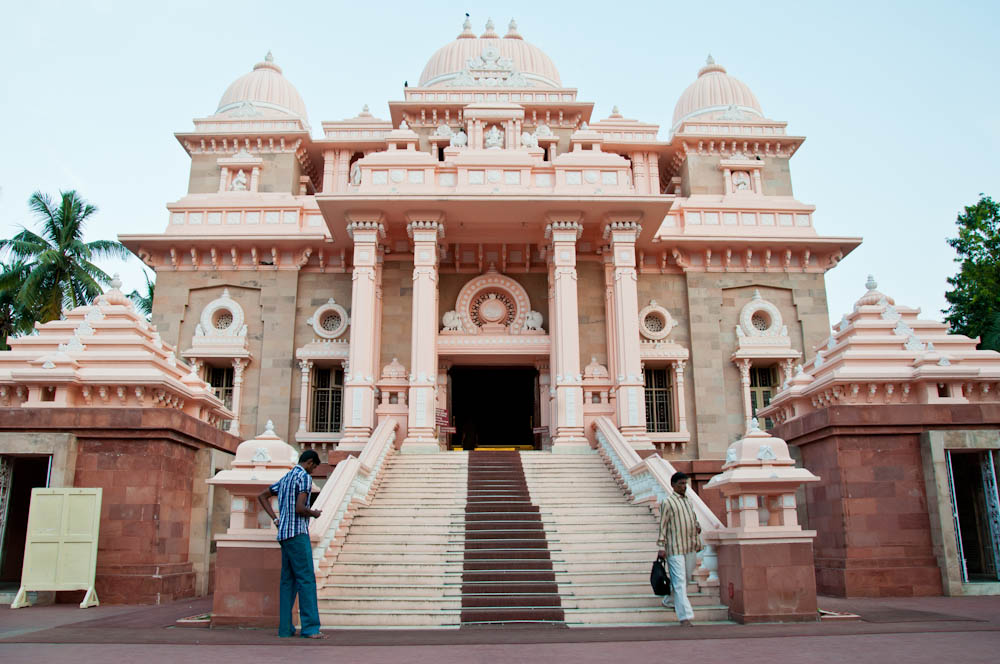 After a religion-filled day, we spent the rest of our stay in Chennai exploring different areas of the city.

The beaches in Chennai have some fame, but they were not really our piece of toast. These are not the kind of beaches one goes for sun bathing or swimming. The sea is rough and the (unspoken) social norms don’t make it comfortable for you to be in revealing clothes. These are the kind of sand strips were people come to walk, have some snacks and pass the time. And so they make for wonderful people watching spots, particularly towards sunset and during weekends.

On a walk around George Town, an area fairly close by to the beach and port, we got lost and found in little alleys and streets where the city meets the village life style. Cars mingle with bull-pulled charts, kids playing barefoot on the streets, ladies carrying vegetables, and, because we are in India, a lot of hustle and bustle.

In one of those little streets, we entered an area where precarious houses made of cardboard, pieces of wood and plastic lined up, making the navigable area of the street narrower. We were in a little slum that had sprung up in the middle of the city, just like they do many times. Before I came to India (and I bet many of you from abroad think this too), I figured slums concentrated in particular areas of the city, perhaps towards the outskirts, besides a hill (like in Brazil, for example) or in rather specific spots. But that isn’t so! Slums (tiny or large) can all of sudden develop pretty much anywhere. In fact, even in front of your own house! And this is why this area was there in the middle of roads mostly filled with shops. 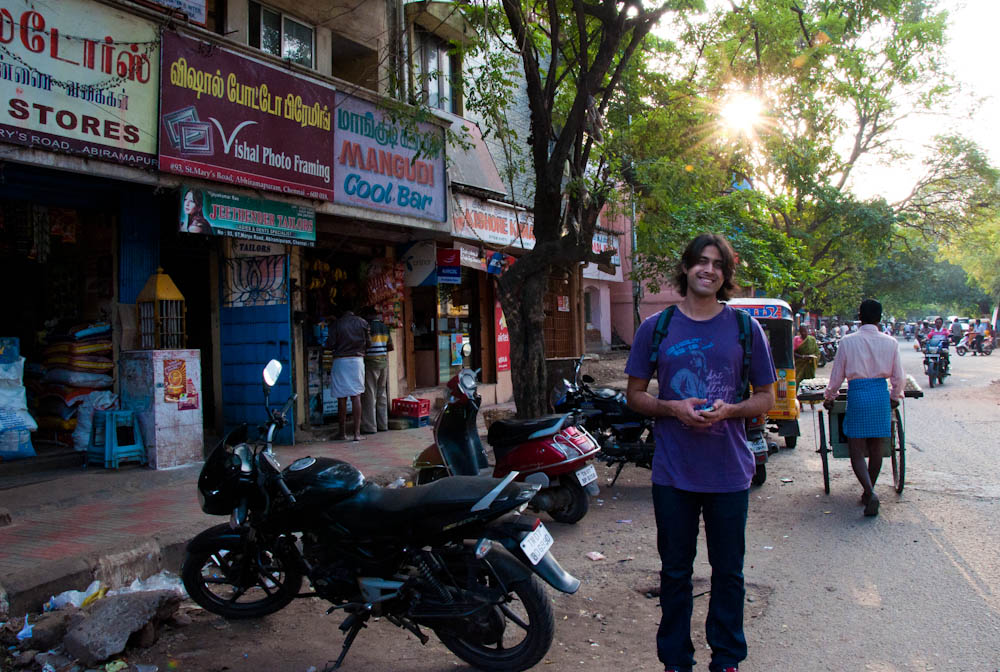 As we walked down these narrow streets, people would look at us as if we had just came from another planet! Not only me, Ashray as well. But as long as you keep it friendly and understand that these are stares of plain curiosity (no negativity intended) it doesn’t have to make you uncomfortable. On the contrary, things can get rather funny, and that’s exactly what happened when a group of young men called out and took our video. How surreal! They had no shoes, no proper houses, but they had a smart phone with camera! As they took our video, I smiled and made one of those faces goras tend to do and that I hate (don’t ask me why, it just happened!) and moved on laughing about it. That awkward moment when someone in a slum takes your video.. file under things that keep making my life more and more happening as time goes by and I go around!

We continued talking and ignored the Fort that represents one of Chennai’s biggest touristic attractions: apparently this is where English people first settle in India and, although I understand how this building is historically symbolic, I didn’t think it was particularly attractive from a visual point of view, as we briefly saw it from the street.

Eventually we decided to take an auto rickshaw back to our hotel. Walking in an Indian city can be challenging. When there are side walks, they are many times filled with trash, or merchandise from the shops around and, sometimes, with people sleeping. So you need to keep zig-zagging and going round and round, to reach your destination.

For instance, yesterday itself, I was run over by a vegetable bicycle rickshaw in Delhi.

But that’s another story!..