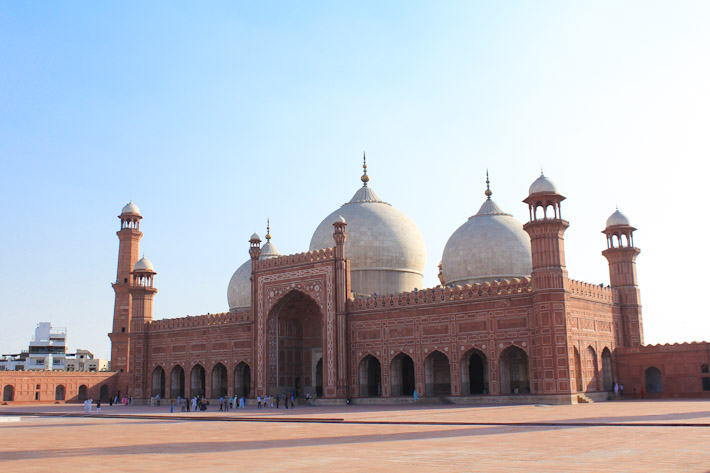 In Pakistan: a peaceful pause at Badshahi Mosque Lahore’s Badshahi Mosque is the city’s icon, its premier religious site, and a focal point for celebrations and festivities. It’s also a photographer’s paradise – one’s lens is drawn to the incredible ornate arches, the bulbous marble domes and the soaring red stone minarets. The glimpses of the city which peep over the high walls; the residential blocks, the gurdwara, the Shahi fort opposite. The devotees who pray in a seemingly endless cycle of recitations and prostrations, those that sit and wonder, like my particular subject here today.

The mosque was completed in 1671 on the orders of the Mughal Emperor Aurangzeb, the last of that great dynasty, and one of the final constructions before the decline of Muslim rule in the subcontinent. The mosque was then used by Sikh emperor Ranjit Singh as a stabling yard for his horses, an insult still not entirely forgotten by Lahoris. Under British rule the mosque initially didn’t fare much better, but after some time a Badshahi Mosque Authority was established, tasked with restoring it to its former glory.

Since 1960 it has been fully restored, and back in the hands of the local Muslims, now part of Pakistan. It sits directly opposite the Shahi Fort, another beautiful example of Mughal architecture, separated by the Hazuri Bagh, a fine example of traditional Persian gardens. Just outside the mosque is the tomb of Allama Iqbal, the 20th century Urdu poet whose often philosophical works are considered to be among the finest of modern Muslim thought. Past the gurdwara stands Minar-e-Pakistan, the most modern addition to the site. Completed in 1968, and packed with symbolic architectural signatures, the tower marks the place where Pakistan’s founding father, Mohammad Ali Jinnah, first made the call for a separate Muslim homeland in South Asia. I continue wandering around the forecourt of the mosque late on the hot afternoon. As the sun sinks lower in the sky, the expansive open courtyard is attracting a growing number of children, who use it as a playground between prayer times. Under the cool stone corridors along either side of the courtyard, large families sit and picnic. A guard stands watch near the ablution area, with the arches affording him a birds-eye view of the approaches to the mosque. A couple of foreign tourists wander hastily towards the head of the mosque, to catch enough happy snaps before the next call to prayer. Despite the goings on outside, the main prayer hall is still laden with a an atmosphere heavy with reverence. God is close, it seems. On my second circumnavigation of the red stone square I have almost arrived back at the man sitting and reciting when a static click is heard from the speakers high above; the microphone has been switched on, and the call to prayer is about to start. “Allahu Akbar, Allahu Abkar” cries the muezzin. The man peacefully raises his hands in front of him, a sign that he is asking God for something. I have stopped in my tracks, absorbing the dramatic moment unfolding around me. The muezzin continues his piece, which by now is echoing around the building and reverberating through the old city outside. The man now raises his hands closer to his face, and wipes them over his cheeks, mouthing an inaudible “Allahu Akbar”. He stands, and for a moment it seems he is still lost in his thoughts. Then he looks straight at me, and with a slight curl of the lips he smiles knowingly, then turns and walks into the dimly-lit prayer hall without looking back. Tim Blight from UrbanDuniya is a writer, traveller, amateur photographer and teacher who splits his time between Lahore and Melbourne.

UrbanDuniya features travel and lifestyle stories and photography from Melbourne, Lahore, Sydney, Chennai and around the world.