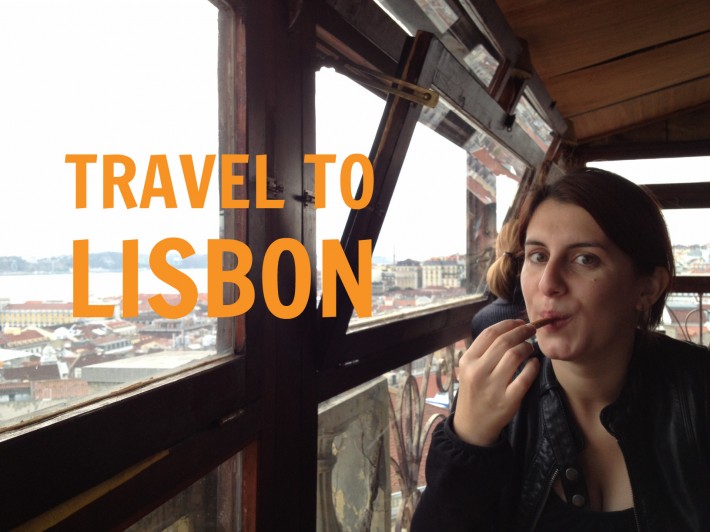 LISBOA, Coisa Boa! (Why you should travel to LISBON)

It’s not easy for me to write about my country from a touristic point of view. As I have lived in Portugal for most of my life, I am obviously biased and would tell you there are a million reasons why you should visit (and more than half of those would probably be food related…)

As this was Ashray’s first time in Portugal and we would be arriving via Lisbon, I tried to put myself in an “outsider’s  mode” to think about what would be worthy to see and do in and around Lisbon. I have gathered here not a list of things to see and do (that Lonely Planet can do). Instead, this is a

Top 10 of good reasons why I can recommend Lisbon

as a really great touristic destination!

Here are my thoughts, in no particular order:

Portugal has great food! I believe I must have already said that somewhere before! I must say that, traditionally, we are not the most welcoming country for vegetarians (although I can feel improvements in this area are happening with contemporary cuisine) but for those into meats and fish, we have plenty for you to dig in! Portuguese people pride themselves on their gastronomy and meal times are sacred. We are no “sandwich on the go” kind of folks. If it’s meal time, you sit, eat, take your coffee, many times desert too and, for some, smoke a cigarette. My favorite dishes include Bacalhau com Natas (cod fish cooked in the oven with potatoes and cream), steaks, fried snacks like croquettes or rissois and pastries.

Coming to Lisbon and not trying a Pastel de Belem (aka pastel de nata) is like going to France and not eating a croissant. If you visit in the winter, just like we did now, enjoy the warm roasted chestnuts that are sold in street carts, especially around Baixa Chiado. I absolutely love them – they taste great and they keep your hands warm while you hold them walking around.

Warning! If you sit down at a restaurant and there is a bread basket (usually along with other appetizers such as butter, cheeses, spreads, perhaps even cold meats or olives) don’t think this is a free treat as it all comes in the bill as “pao/manteiga” or “couvert”. Just thought I’d mention this here as I guess most people from abroad would assume this is complimentary, but unfortunately it is not and this won’t necessarily be made clear to you before you start eating. Lisbon is pretty good value for money, particularly if compared to most of Europe’s capitals. It’s not as great value for Portuguese people: salaries are much lower than in most of Europe and though prices are lower, salaries still lag behind. But it is true that in Lisbon you can eat, sleep and go around for less than in many close-by countries. It’s fairly easy to get a nice meal for around €8 or ride the metro and bus for €1.25 (lasts for consecutive trips during one hour, not just one trip) when buying a transports card (called Sete Colinas) that only costs €0.5.

If you like being by the water, while in Lisbon you are in front of the river and 10mins away from the sea. Enjoy the Tagus (known in Portuguese as Tejo) crossing by boat to the other side of the river, by taking a bicycle ride along the river in Expo or sipping a coffee with river views: Resto @ Chapito is my favorite spot for this – a bit of a touristic cliche, but for a reason indeed.

If you are into salty waters, you can drive towards Cascais or easily take the train there from Cais do Sodre station, located downtown. You’ll get a great view of the Atlantic and, whether you are into posh hang-outs or surfing spots (both abound), you are very likely to feel good once the sun hits your skin. Long live the good weather! I don’t mean to make Lisbon stand out by comparing it to the rest of Europe (once it has enough reasons to shine on its own), but it is rather true that the weather here is better all year round when compared to many European capital cities. Cabo da Roca, on the way to Sintra By good weather I don’t mean sunny, but moderate. You get a feel of all the 4 distinct seasons but it never gets extremely cold or unbearably hot. Spring might be the best time to visit, specially if you can’t take any rain, but it is possible to be out and about any time of the year.

Lisbon has plenty of historic places to visit, although I must recognize that we don’t do the best job promoting them.

For the best view of the city, go to Castelo de S. Jorge and you’ll be on top of the same hill the Moors were one day. One of the most touristic places in the city is also the one that concentrates more sights of interest: Belem. Here you’ll find the grandiose Mosteiro dos Jeronimos and Torre de Belem (most notorious examples of a Portuguese architectural style called “Manuelino”, also known as “Late Portuguese Gothic”). In Belem, you can also admire the Padrao dos Descobrimentos, which marks the spot where the Portuguese boats departed to India and the Orient for “discoveries” back in the 15th century.

These are just a few of the most famous historic buildings in Lisboa, there are many more, specially religious ones. Looking at the city from Castelo Sao Jorge I think the main plus of Lisbon’s sights is that they are quite distinct and have tons of personality. Some areas are not that well preserved, quite true, but the old buildings give Lisboa the down-to-earth feeling that other capitals, more touristic and therefore better preserved, might not have.

I like to think that it is easy to feel at home here. Is it?! If you go to Lisbon, do let me know!

6. GREAT PLACE TO STROLL AROUND!

My favorite activity to do in any city of the World is strolling around. Because sometimes you don’t feel like going for a specific thing but just want to breathe in the feel of the place you are at.

I LOVE walking around in Lisbon, especially in the older parts. And I don’t mean just Baixa Chiado or Rossio – that would be almost “basic”. The best part is to just wander into smaller paths, see neighborhoods where the real people of the real world live, maybe stop for coffee somewhere you didn’t plan and simply observe the people passing by. I might not be the best person to talk about night life (not a party animal myself, at least not in the traditional sense…), but that isn’t going to stop me from telling you that Lisbon is pretty decent in this matter too.

If you are into small bars and tons of people drinking on the streets head to Bairro Alto (reminds me of my college days). Around town you find many bars, clubs, “specialized” hang-outs for gay crowd, rock, trance, live music, etc… even live Fado, the traditional music of Lisboa.

Coming from a small town in the North of Portugal I was very excited to move to Lisbon for college back in the day and the main reason was music. There are major concerts happening in Lisbon (all music genres!) The more touristic music events would be the Fado gigs taking place mainly in restaurants downtown, but there is also the local more alternative scene, with small gigs of rock, punk and all that jazz. I am a fan of those!

If you haven’t had a listen to Portuguese rock music, allow me recommend some of my favorite bands, such as Civic, EasyWay or More Than a Thousand.

9. WE DON’T ALWAYS SMILE, BUT WE ARE FRIENDLY PEOPLE

Lisboetas might not always look smiley (specially while commuting!), but they are good people and will make you feel welcome.

If you ask people for directions, they will try to help you and even recommend their own take on things. In general, Portuguese are simple down-to-earth people and would be happy to see foreigners taking an interest in their country, culture and food. This guy is really honest!

10. PORTUGAL IS SMALL. THERE IS NO EXCUSE NOT TO GO AROUND

Last but not least, Lisbon is a great departure gate for the rest of Portugal.

We have a small country, but quite rich in terms of variety. If you want to do beach related stuff, head south to the Algarve. If you like the laid-back country side, visit Alentejo, drink wine, eat comfort food and enjoy! Go North to find out where the famous Port wine comes from and explore the green landscapes (I was born around those myself)… And there is so much more in between! Such as the Madeira and Azores islands, in the Atlantic. Everything is relatively close and it’s easy to virtually drive anywhere or get there by bus, train or flight for the islands.

I leave you with this video that Tourism of Portugal is promoting. And no, they are not paying me for this, if that’s what you are thinking, but I think the video can give you a good idea of what’s waiting for you on our side of the world!

… and let us know how it goes!