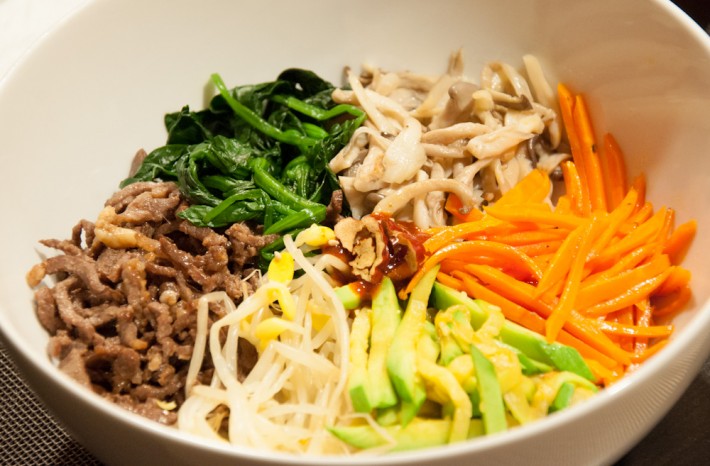 It’s only been a few weeks since our trip to Korea came to an end, and we’ve already cooked bibimbap (비빔밥) at home at least 5 times!

If exploring the food culture of the country was one of the highlights of our trip around Korea, taking a cooking class in Seoul was the cherry on top of the cake! Or should we say the kimchi on the side of our rice bowl?! Either way, it wasn’t until we went restaurant hopping, food court touring and fish market hunting in Seoul and beyond, that we had a proper idea about what Korean cuisine was all about. We had heard of kimchi, bibimbap and Korean BBQ before, sure, but now we know how much more there is to the local fare.

As we know finding authentic Korean food abroad can be hard (unless you live in North America, maybe?) we set ourselves a goal: to learn how to cook some easy items that would, later on, remind us of all the deliciousness we experienced while traveling around Korea. During our stay in Seoul, we got in touch with Chris from K-cookingclass. Starting right with the name of his cooking school, we had a feeling he was going to be a fun guy to hang out with! We weren’t wrong… 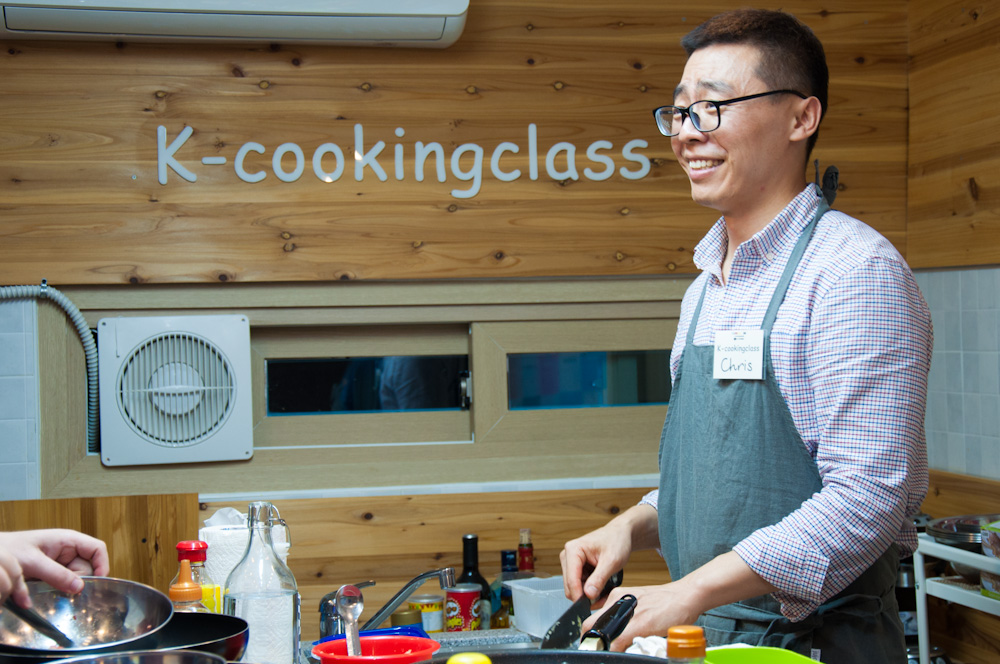 Chris, the master-mind and master-chef behind K-cookingclass

On a chilly evening, we met Chris and four other travelers by Mangwon metro, in one of those elusive residential yet central neighborhoods of Seoul, where you see no other tourists hanging around. We took a walk around the local market to grab some ingredients for dinner, while learning about the basic principles and ingredients of Korean cooking. 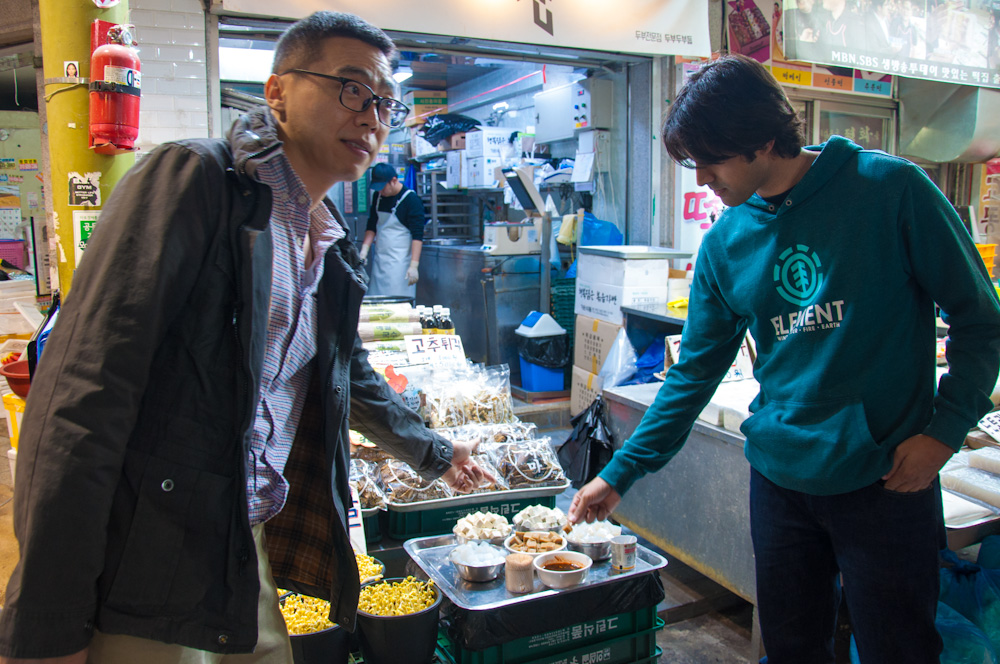 Shortly after, we were welcomed to Chris’ fabulous kitchen for three hours of non-stop fun! The house was warm, the lighting was right, our cooking colleagues were great to talk to, and so we had all the ingredients we needed to spend a memorable evening in Seoul. 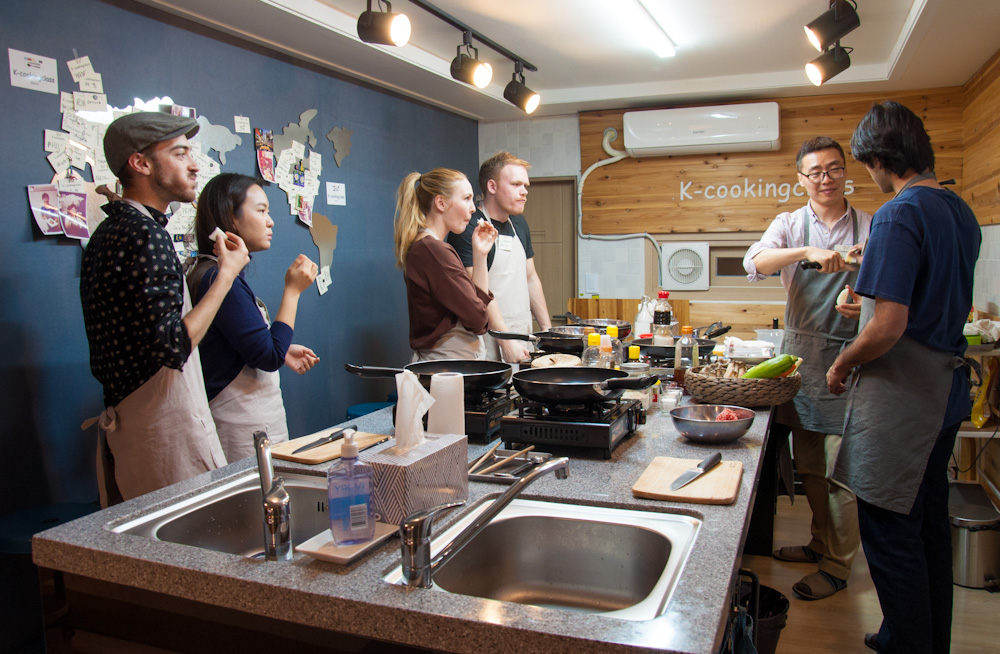 Tasting the ingredients we cooked with

Down to the actual cooking, we appreciated how Korean food can be so wholesome and healthy, especially when prepared at home. Just like Chris mentioned, bibimbap (in Korean, literally, mixed rice) is for Koreans what a sandwich is for westerners. Basically, you always have steamed rice at home, just like you have bread in wheat oriented cultures. And the toppings you add to it can be pretty much anything you happen to have in the fridge: veggies, meats, pickles… Korean food is usually served with at least one side dish, kimchi, but normally you’ll enjoy many other pickled vegetables, featuring sour and sweet tastes. If you were to add any of these side dishes to your steamed rice and mix it all with gochujang, Korean red pepper paste, you’d already have a bibimbap ready to enjoy! 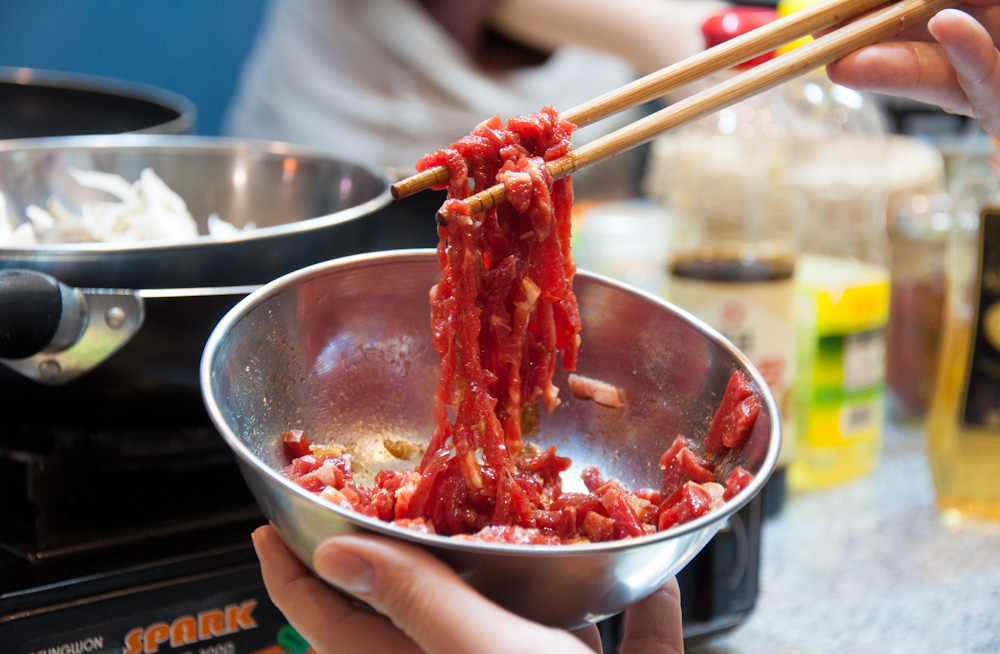 The bibimbap we cooked was a little more elaborate, featuring fresh ingredients like beef strips and a colorful array of vegetables like carrots, spinach, mushrooms, and sprouts.

Bibimbap plating can be so eye-catching that you almost feel bad when you have to mix it all up with the gochujang before eating. Furthermore, bibimbap is incredibly nutritious and balanced – try eating it with a side of kimchi every day and you’ll see how your system works like clockwork! 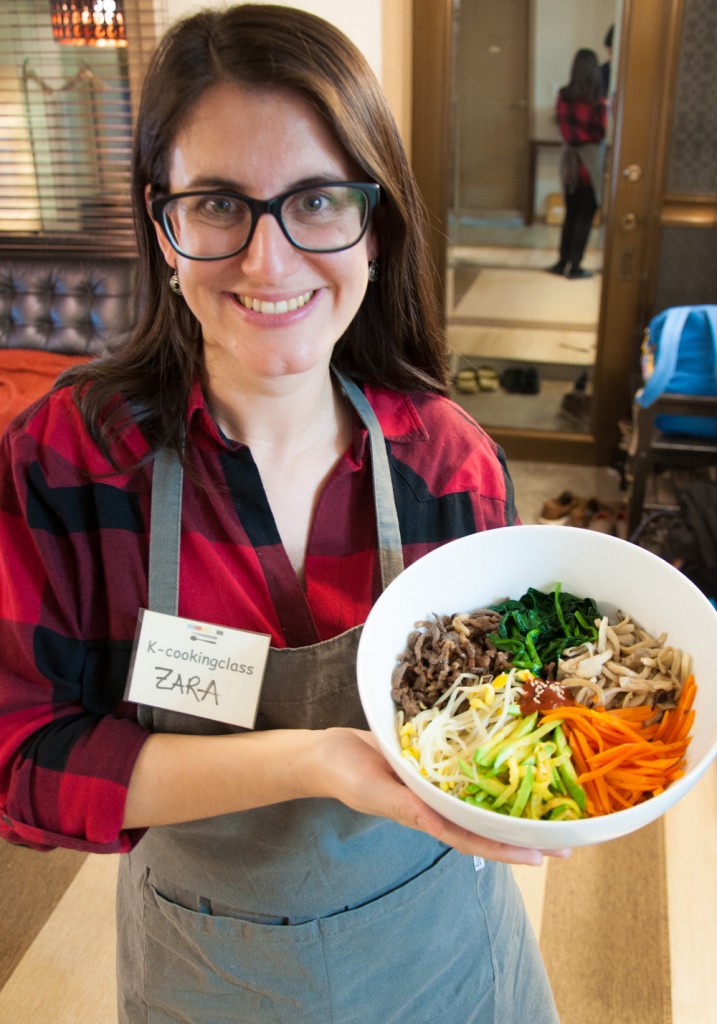 Good on the eye, on the mouth and on the tummy: bibimbap is all that!

For the occasion, Chris decided to teach us a few more recipes, because a good Korean table will always include more than one dish! This is how we also ended up learning how to make a fresh salad with black sesame tofu and a distinct Korean dressing, tteok-galbi (떡갈비), that is, super soft and flavorful hand-shaped Korean beef patties, as well as pageon (파전), aka Korean green onion pancakes. 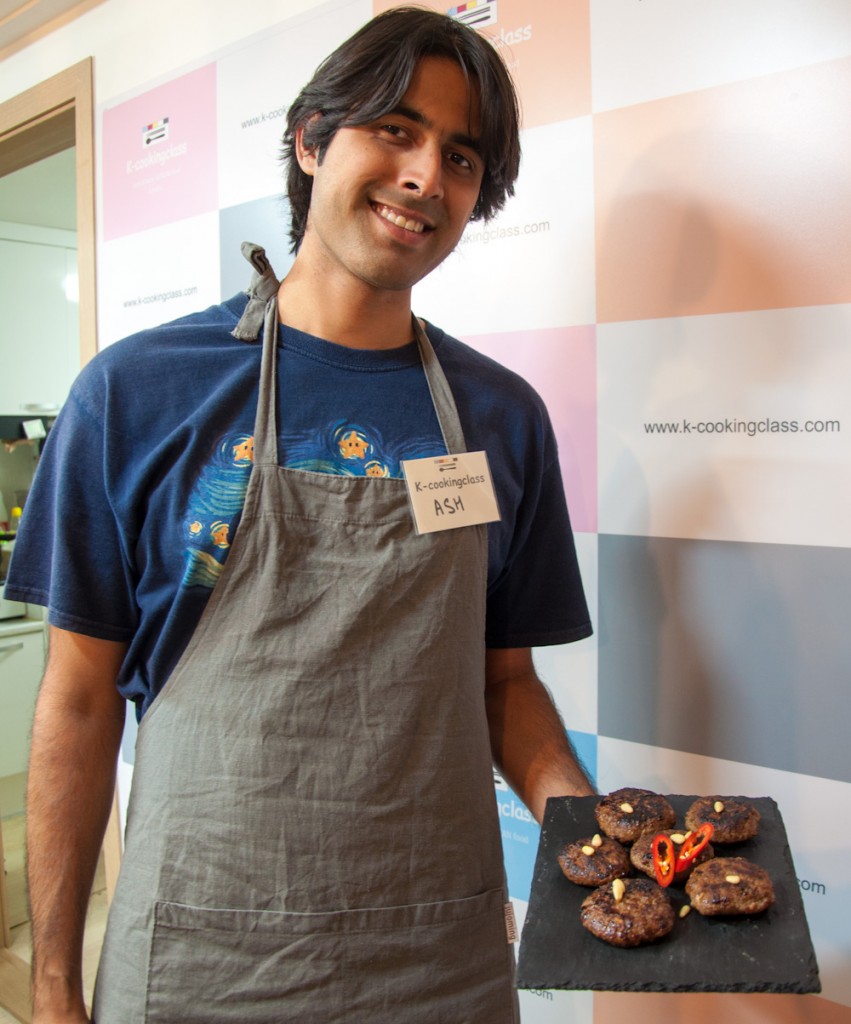 After chopping, sautéeing and laughing away during this cooking class, the time we were all waiting for arrived: dinner! Chris invited us into the dining room, where the table was already set in style. Not only did we get to enjoy the food we cooked, Chris did what any truly Korean person would do and started bringing out the side dishes and the makgeolli (막걸리) rice wine, that Korean pancakes are normally enjoyed with. Or maybe it’s the other way around?! ;) We ended up cooking so much food that we got to pack extra to eat the next day – bonus! 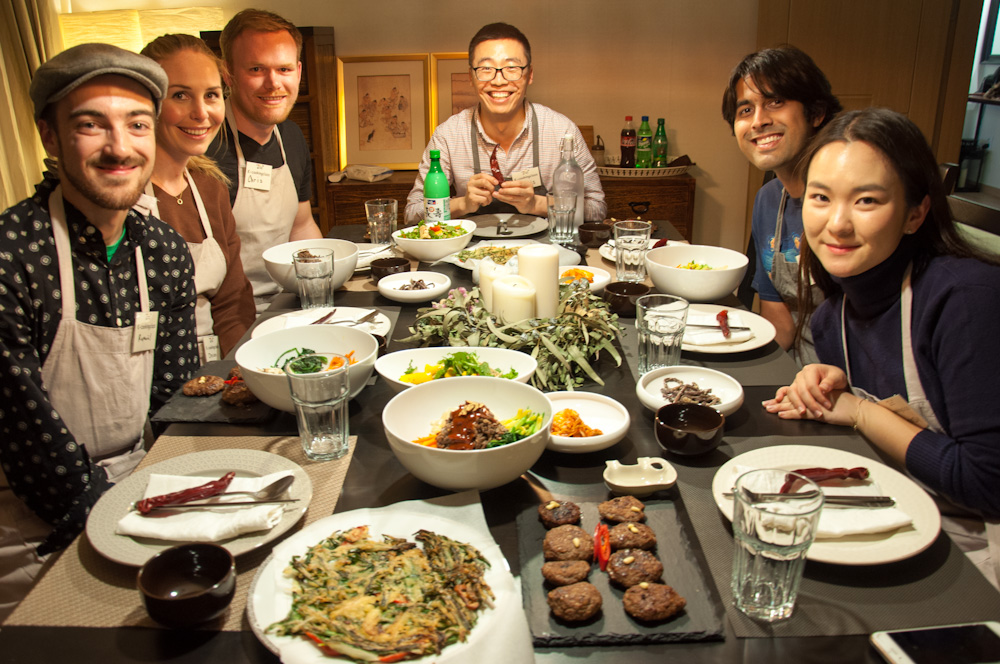 Cooking classes are always great experiences to bring you a little closer to the culture of the place you are exploring. In Seoul, we found K-cookingclass to be brilliant. The menu can be adapted according to food preferences and dietary restrictions (veggie bibimbap rules!). Chris makes the class super easy to follow and the setting is remarkable: from the kitchen set-up, the impressive dining area,  and the goodies we ended up leaving with: 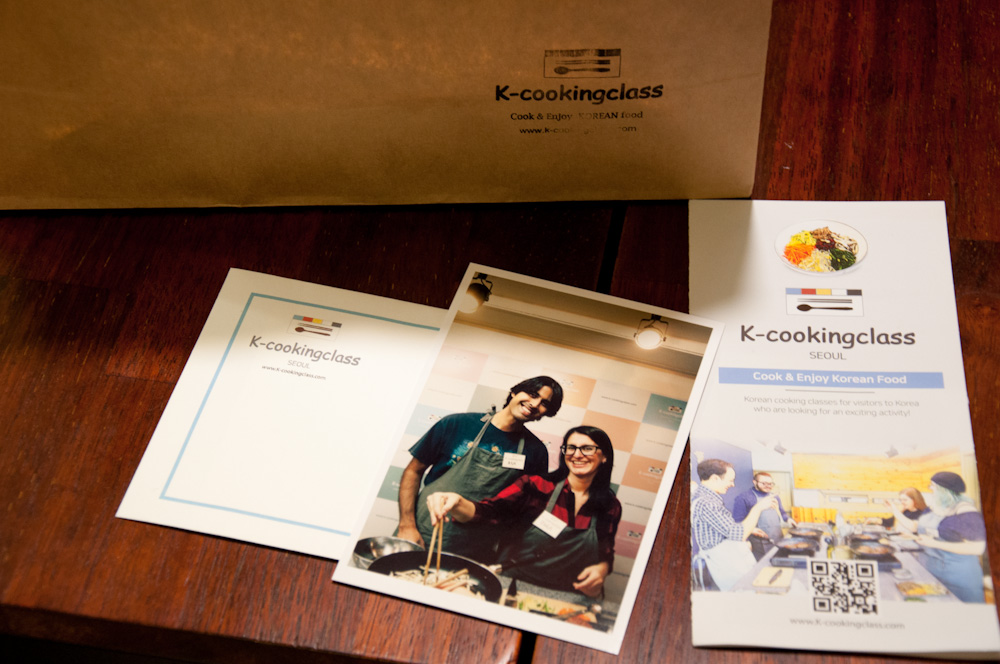 K-cookingclass experience includes take away food, menu cards and a cool photo printed on the spot!