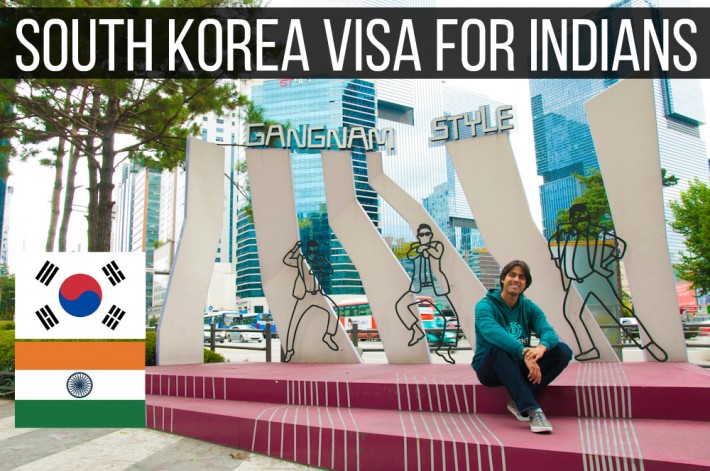 October 22, 2017 /Posted in Asia, Best of Backpack ME, Korea, Visas for Indians /By Ashray

… there’s also a little known way of visiting the rest of South Korea without a visa for up to 30 days! This doesn’t just apply to Indians but most nationalities that require a visa to visit South Korea.

The only nationalities that this does not apply to are: Macedonia, Cuba, Syria, Sudan and Iran.

How do I know this works? I just used the exemption to visit South Korea!

My experience when I arrived in South Korea was great, but if you’re visiting from India, be prepared to answer lots of questions before you get to leave India. 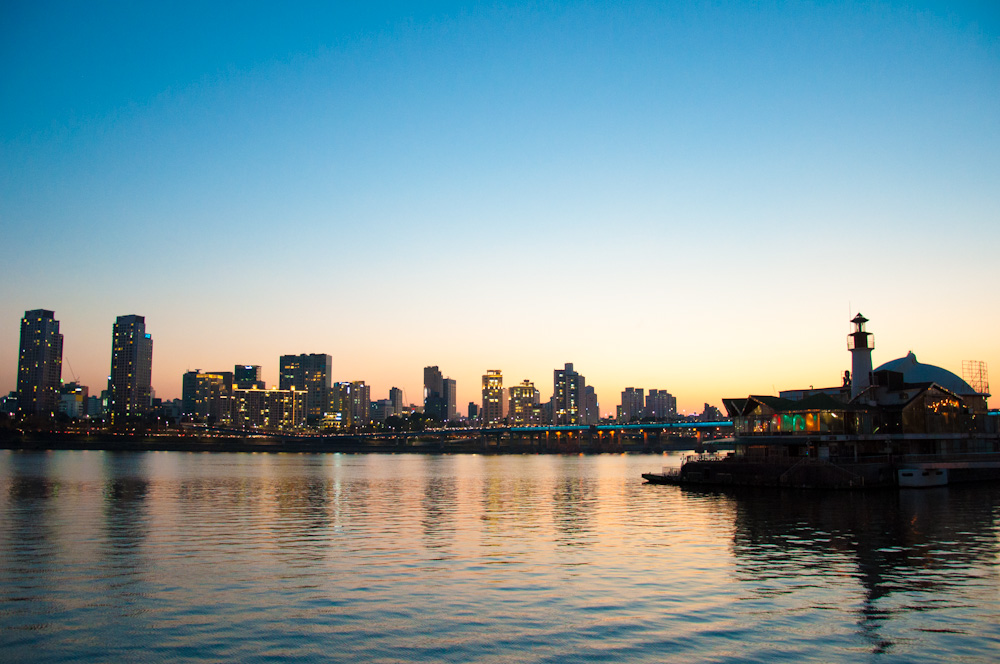 The skyline of Seoul by the Han River

So to recap, as per the law all you need are:

However, depending on where you are departing from, you may have to answer some questions for the airline check-in staff and immigration. As this is a little known feature of South Korean immigration law most airline check in agents and immigration officers at your departure airport will not know about it. Of course, in India, airline check-in agents are typically much more stubborn and so are immigration officers. The good news is that the airline information systems (TIMATIC) that carry visa and travel info do have information about this Korean law. So if you meet a stubborn check in agent (I did) all you need to insist on is that they check their airline information system.

When I got to the airport in New Delhi, I already knew that nobody in India would know about this rule. I also fully expected that they will stop me and ask me one thousand questions about this. My expectations were met, and exceeded. 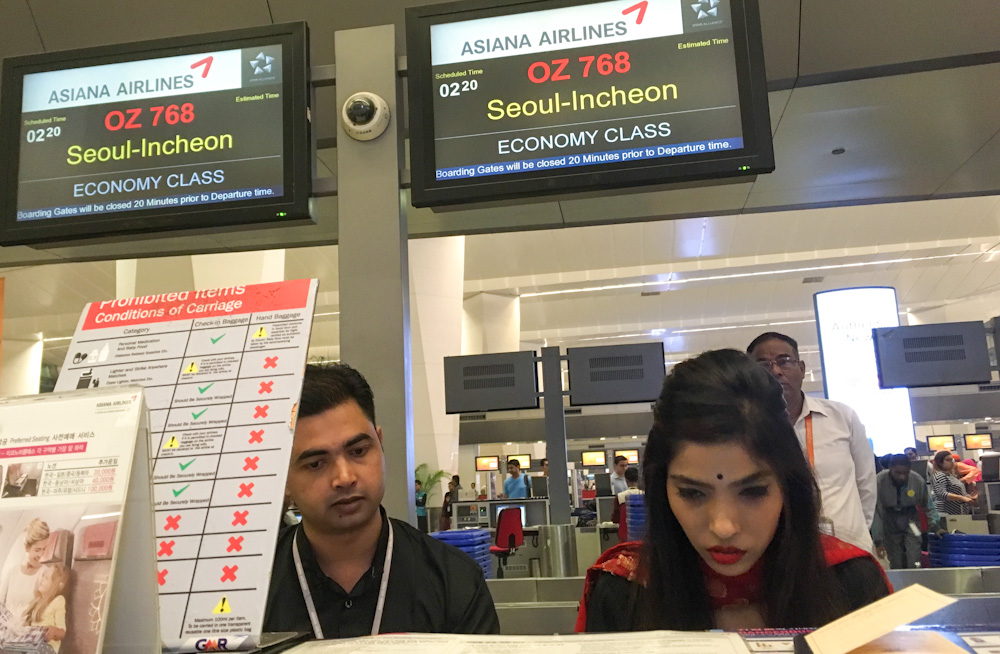 Flying to Seoul without a visa, with Asiana Airlines

At check in, the Asiana agent was absolutely firm that I needed a visa. I had printed out a copy of Asiana’s OWN information system saying that I could travel (you can see this in the picture below). I showed him my onward flights and my Schengen visa. Yet, he kept insisting “It says here you need a visa”. So I showed him the printout. Inspite of putting this in front of his face, he insisted “It says here you need a visa”. I replied, “Have you looked at the paper I’m showing you?”. “But it says you need a visa”. So I repeated as calmly as possible again “Can you please check further? Click on the thing that says more information”. At this point, he realised that I knew what I was talking about so he went and called his supervisor. The supervisor was a really nice guy. I explained the situation to him, said that this is a little known feature of the immigration rules but the airline information system reflects it and the supervisor said “Please check them in”. 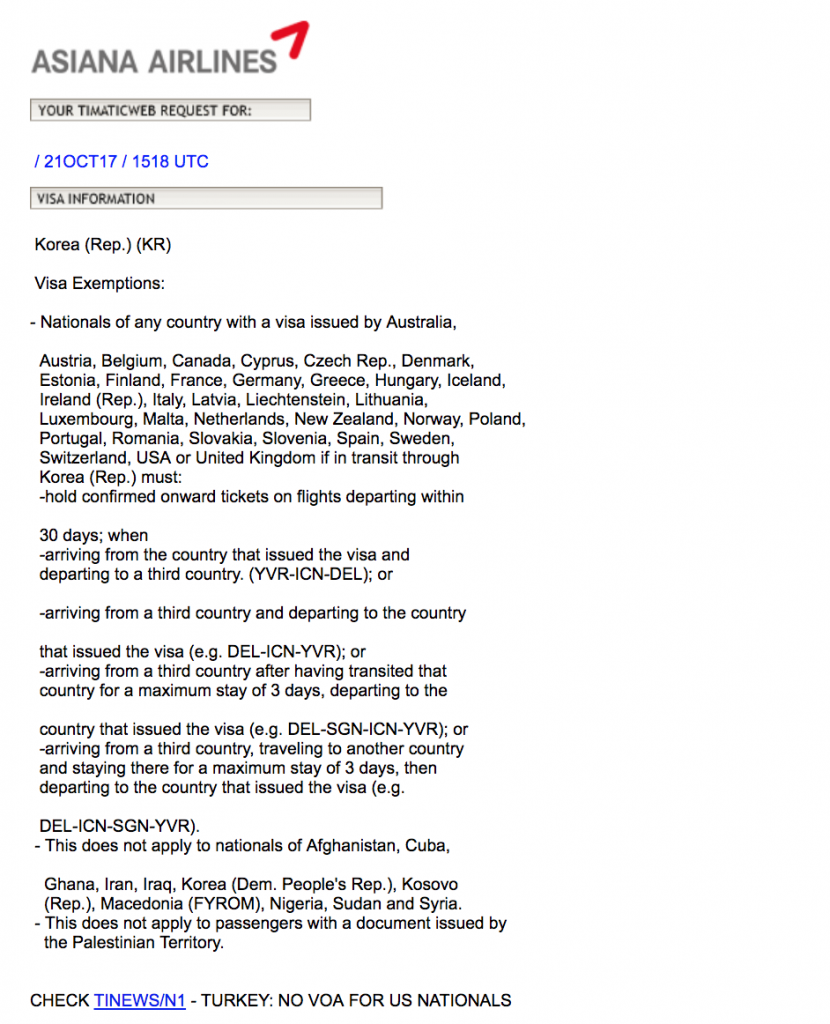 Then we went off towards immigration. After a short wait one of the immigration officers called us over. This guy didn’t even know how to work the computer in front of him. He asked me about the Korean visa, I explained the whole thing to him again. He entered my passport info wrong in the computer, scanned Zara’s boarding pass with my passport and then when I asked him about that he said “Oh, it’s fine, you guys are traveling together”. To which, the guy next to him said “No, you need to reset it and scan it again”. He looked back at his system “Oh.. how do I redo this?”. “Press Control R”. “Oh … ok”. Then he asked me about my surname and asked me if I was from Bengal. I told him no, I’m from Assam. He kept insisting that my surname was from Bengal. After that, he refused to believe my Schengen visa was real and put it into the UV scanner. Ten minutes went by and he was still struggling with his system. Finally he gave up and told me to go over to the other immigration guy sitting next to him.

The next guy asks me again about the Korean visa. I tell him the whole story once more. He then asks me “Do you have any letter or something?” Now, I knew that this might come up so I came prepared. I had the printout from the airline information system. In addition to this, I had also printed out the web pages from the Korean immigration service regarding the rules. I had also taken a printout in Korean just in case the immigration officer in Seoul didn’t know about these rules (they did know). I showed them to this guy.

He spent about 5 minutes reading them really carefully. Then he says “Okay, I’m letting you go but if you face any problems it’s all on you. We’ve never heard anything about this type of rule”. So I said “That’s fine”. He stamped me out, and we were finally on our way!

After this, we were lucky to have a super empty flight. Just 90 people in an A330-300 aircraft. Wonderfully comfortable and we soon arrived in Korea.

Korean immigration was a breeze. I walked up to the officer, said Hello and explained that I am transiting through Korea for 12 days on my way to Europe and showed her the printouts of my confirmed tickets onwards. I also showed her my Schengen visa. She asked me “Your final destination is Portugal?” and I said “Yes”.

That was it, she stamped me in for 30 days and wrote under the stamp (in Korean): India-Korea-Portugal. 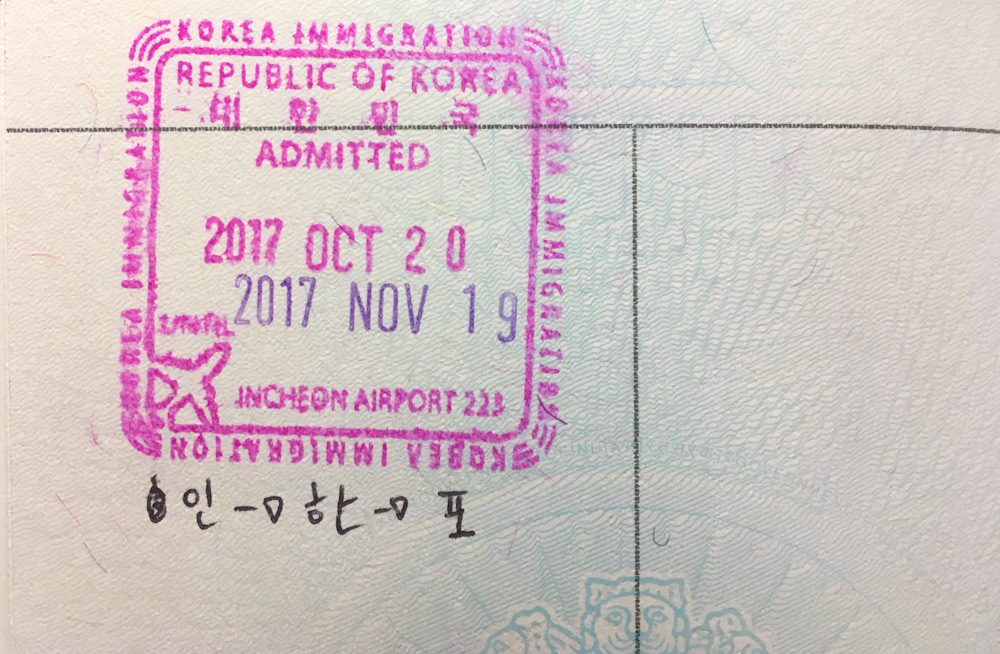 The Korean Embassy in India

The Korean embassy in India told me that I would need a visa if my final destination was Europe. This transit visa exemption has existed for a long time for travellers going to the US, Canada, Australia, and New Zealand. The Korean embassy in New Delhi knows about this and will confirm that you can visit Korea without a visa for up to 30 days if you’re going onwards to these 4 countries. However, the Europe rule has only been added recently (March 2017). So, the Korean embassy in New Delhi told me I needed a visa to come to South Korea if I was flying onwards to Europe.

Unfortunately, there’s sometimes a lack of communication between various agencies. I knew the rules that Korean immigration had directly put up. I also knew that the airline information systems reflected the rules from Korean immigration. Unfortunately, the Korean embassy in New Delhi hasn’t updated themselves. Also, the Korean embassy in Australia has published the updated rules on their website (click on the notice that’s titled: Transit tourists bound for another country). I still wasn’t convinced, especially after I had received a negative response from the Korean embassy in New Delhi. My experience had taught me though that consulates can often give out wrong info since government agencies don’t always work in sync with each other.

We packed our bags and finally arrived in South Korea! Overall, it was worth it since we spent about 30 minutes extra at the airport in India repeating the same information at check-in and then immigration and we had to take some extra printouts with us. It also fit in neatly with our plans of traveling onwards to Europe. Definitely beats applying for a visa any day. 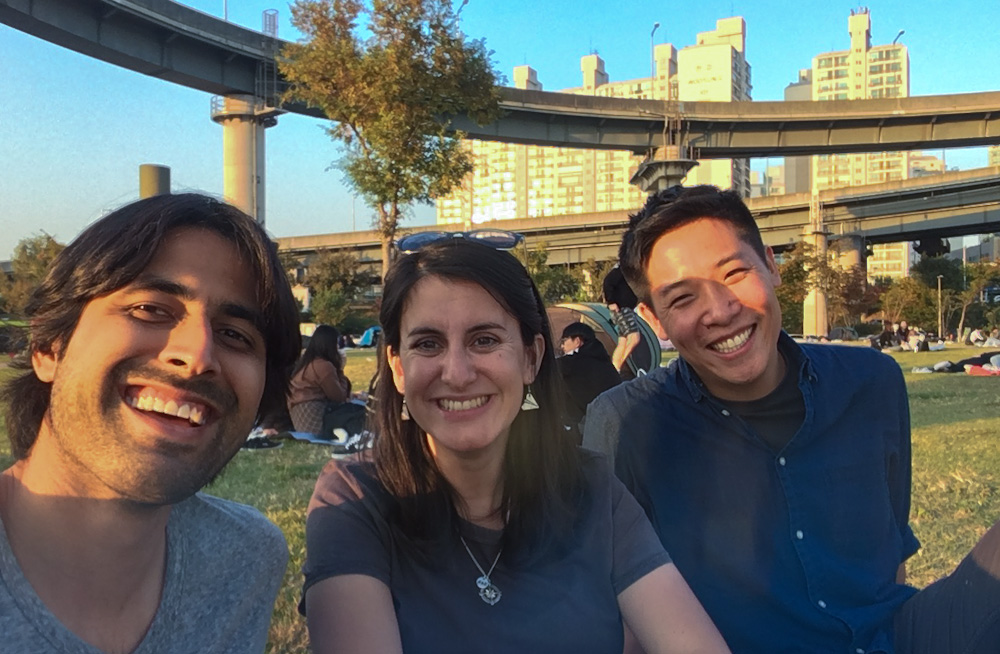 Enjoying a picnic of Chimaek at the Ttukseom Han River Park… even though the South Korean Embassy in Delhi didn't think this was possible!

How to travel to South Korea without a visa

Overall, it’s pretty straightforward. You should of course be planning to fly onwards to Europe, USA, Canada, Australia, or New Zealand. You should also have the right visas to enter these countries. If you’re planning to use this visa exemption in South Korea I recommend you go to the airport with time to spare (3 hours before your flight). Carry with yourself printed copies of the following:

If you aren’t leaving from an Indian airport, you shouldn’t face most of the issues I had to face. However, it’s always good to be prepared and still way better than spending time and money to apply for a visa beforehand!