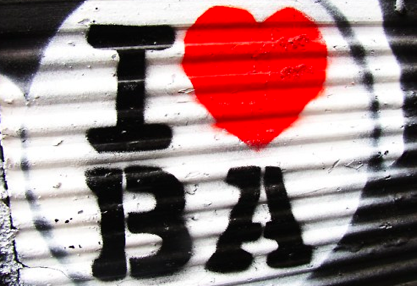 My partner and I spent a total of seven weeks in Buenos Aires this time last year at the beginning of our time in South America and absolutely loved it.

Were it not for the rapid inflation in Argentina and the fact that it’s pretty far away from Europe, we’d definitely consider basing ourselves there.

There are so many things to love about the capital of Argentina, but here’s a pick of just ten, in no particular order. Something I really didn’t expect to see in Buenos Aires were all the red post boxes, just like the ones I was used to growing up in the UK.

There are so many really great art galleries and museums in Buenos Aires, it’s hard to know where to start. Here are some of my personal favourites: part 1 & part 2.

The food: ALL the food! Oh my the food in Buenos Aires. Even though I didn’t once touch a steak as I’m vegetarian, I had some of the best food in my life in Buenos Aires. There’s simply so much choice, and you could easily spend a month eating at a different place every day and still only stretch the surface. The 'English Tower' gifted to Argentina by Britain

The monumental tower outside Retiro train station is affectionately known to some locals as ‘Big Ben’. Clearly only those who’ve never been to London. Cute.

The many green spaces For such a metropolitan city, Buenos Aires has a myriad of green spaces and parks, many with perfectly manicured gardens, and even a huge nature reserve right on the coast by the Río Plata. Buenos Aires may just be one of the best cities in the world for high quality street art. The act of creating art in public wall spaces has been decriminalized and there is clearly a great respect for it, meaning you’ll find something noteworthy round most corners, especially in San Telmo and Palermo, perhaps the two trendiest neighborhoods. Especially in the neighbourhood of Retiro, you could be forgiven for thinking you’re in Paris. In fact, some of the buildings are actually constructed entirely of materials brought over by rich immigrants from France.

The locals may complain about it, but the public transport system in Buenos Aires is, by South American standards, efficient, easy to use and inexpensive. The Subte, with its six lines is quite extensive, and where it doesn’t reach, buses go and are easy to work out. Argentinians take their coffee very seriously, and there is a wide range of different ways to enjoy it, from a lágrima (literally a tear of coffee in mostly milk) to a cortado (mostly coffee, cut with a splash of milk), often served with light and fluffy medialunas (more or less croissants). A market in Buenos Aires

Buenos Aires is full of markets, especially on Sundays. The most famous is probably the Feria de San Telmo, which sells the usual tourist tat, plus a wide range of hand-made souvenirs and antiques. SAM is a sometimes-EFL teacher, wannabe-minimalist, language geek who is trying to make it as a digital nomad with his partner, Zab. You can follow them on their blog Indefinite Adventure where they chronicle their journey, write about the places they visit, the food they eat (preferably vegetarian, organic and locally produced) and the people they meet. They are also on Facebook, Twitter and Foursquare.

What is your favorite city? Share a guest article about it here on Backpack ME.