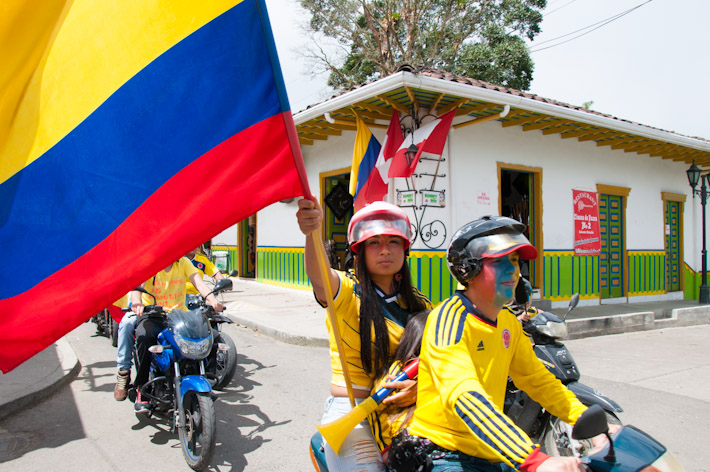 A couple of weeks ago we were in the small town of Salento, in Colombia’s well known “Coffee Triangle”, when Colombia’s national team won 2-1 against Cote d’Ivoire in the FIFA World Cup.

If I hadn’t had a context, just by walking the streets and observing how happy people where, I would have thought Colombia had just won the World Cup! I come from a very football loving country (Portugal) and, still, I had never seen anyone celebrate victory with the joy that Colombians do. Even if this was only a battle, and not the entire war.

For the rest of the day, this is what the pueblo of Salento looked like: Some rather watch from above Salento, even more colorful than usual!

In Colombia, on match days, EVERYONE wears the official jersey or, at least, yellow clothes. This includes airport crew, hotel staff, waiters and waitresses at restaurants and cafes and, of course, the general people roaming in the streets. Even Immigration officers at the airport and other people who’d normally have to wear a specific work uniform – isn’t that crazy?! Proud Colombians, you can tell… Right next to Salento's church Everyone is pleased in Salento! Chillin' after the match … and so do the owners of the establishments!

If you’re not wearing the national colors, you’re not allowed in photos. If you try to be a part of the image, this is what happens… No jersey = no photo! Just a couple of days ago, we were flying from Bogota to Chile and, although the airline was Panamanian, the crew announced the results of the day’s matches. Colombia had won once again, this time 4-1 against Japan. People inside the plane cheered and applauded.

I don’t care much about football myself, but the energy Colombians exude as they celebrate is contagious and up-lifting.

This weekend Colombia played again, and won against Uruguay… I have a feeling we missed out on epic celebrations!