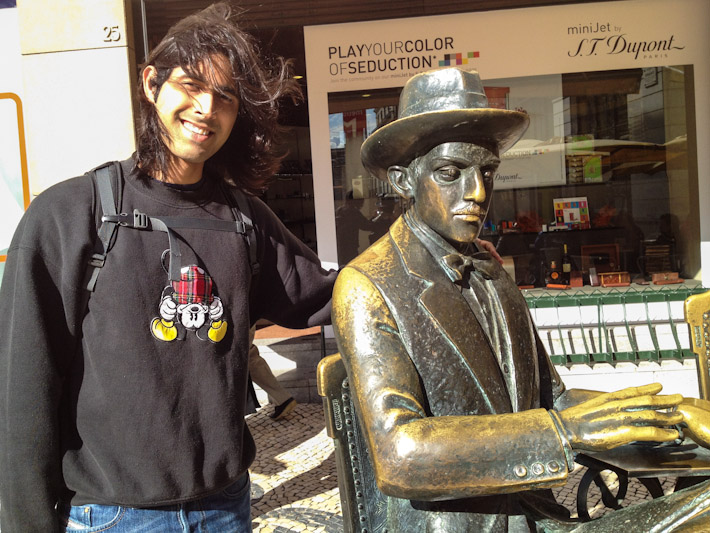 November 4, 2011 /Posted in Europe, Portugal, Visas for Indians /By Ashray

Well the mountain didn’t come to me..

There’s an old saying “If Mohammed will not go to the mountain, the mountain must come to Mohammed.“
I’ve had one of the craziest days of my life today.

It’s the 4th of November and right now, I’m writing this on a flight from Chennai to Mumbai. A flight that wasn’t part of my itinerary until a few hours ago. My flight was delayed and shall arrive in Mumbai about 45 minutes late at 2245 hours (10:45PM for 12-hour time display fanatics). I have to catch a flight from there to London at 0235 hours.

So lets rewind a few days. The last time you read about me, I had taken 96 flights of stairs and had emerged from the doorway of the International Trade Tower looking like Brad Pitt. Unfortunately, the stress from the last few days undid all of that, DAMN!

Well, what that means is I had 4 working days before I could get the visa. On the Friday of week-1 (I was to leave for London on Friday week-2), I sent in an email request to the embassy to ask if they could quickly process my visa.

On Monday someone called me and said that they could try doing that but there are no guarantees, plus he requested some additional documents to make it faster, namely:

You’ve already read about all the other documents that I had submitted by now. I quickly scanned and emailed all my stuff. No dice. Nothing happened.

Tuesday was All Saints Day and the embassy was shut tighter than Tutankhamen’s tomb.

On Wednesday, I tried calling the embassy all day but couldn’t get through to anyone. I did get through to the VFS Visa service who had initially setup the whole visa process and they got back to me saying that the embassy needs ANOTHER 10 DAYS!

So I had to ask my dad to help. He contacted some of his friends in the Indian Air Force, who contacted someone in the Ministry of External Affairs. They helped put in a word to get the visa processed.

Mind you, Wednesday, Thursday and Friday had been declared as NON-WORKING DAYS by the embassy (wonder what that is…). Meanwhile, I also found this profile on Facebook “Embassy of Portugal Delhi” who happens to be quite a nice person : )
There was an Air Force Sergeant stationed in front of the embassy (on Monday, Wednesday and Thursday) to get my passport and dispatch it as soon as possible. The initial plan was to  get the passport out so I could apply for the visa in London. However, according to Schengen rules you can now only apply in your country of residence. Boohoo! So we had to wait for the visa..

By now, the person at the consular section was getting inputs from tons of different places:
- I was talking to him directly on the phone (whenever possible) and through email
- VFS was calling him at least twice a day
- The Air Force was poking and prodding him
- The ministry of external affairs sent in a few faxes about my visa application
- The nice person behind the “Embassy of Portugal Delhi” Facebook profile also helped look into it

I feel kinda hungry. Well, that’s understandable considering I barely got any time for lunch (was on the phone canceling my Coimbatore->Mumbai flight) and it’s 9:45PM now. Oh, here’s the guy. “Sorry sir, we don’t have any food – only cashew nuts and apple juice”. Well, this was meant to be, I have only Rs. 90 in my wallet and.. “The juice is Rs. 40 and the nuts are Rs. 50″. “Excellent I’ll have some please!”

I couldn’t speak to the consular section myself on Wednesday as no one would answer the phone.

However, on Thursday – someone from the Air Force called him and he burst out saying:
“Why does everyone keep calling me about this guy’s visa ?!”

Haha, sorry about that. Just got kind of desperate by the end of the week I guess. It was actually quite nice of them to process my visa since it appears that they were having some kind of holiday with some celebrations.

My visa was finally stamped by the Portuguese Embassy in New Delhi on Thursday (3rd November 2011). What this meant was that my passport was in New Delhi while I was 2000+ kms. away in Coimbatore. I asked my friend Sunny to pick up my passport and he was nice enough to do so. We decided to use DTDC’s GUARANTEED Next Business Day delivery option. I should’ve known that there would be problems considering that DTDC calls this service NBD and that sounds like a particular bank I would definitely UN-RECOMMEND :P

So, Sunny handed in my passport to Mr Manoj in New Delhi who PROMISED that it would be delivered in Coimbatore by 12PM on Friday. Obviously, I need my passport to go to London on schedule.

Excited that I would finally have my passport and be able to make it to London, I called DTDC at 10AM on Friday (today..) morning “Hey, so when is my consignment getting delivered ?”. “Tomorrow Morning” “WHAT ?! I need it today! This is shipped by NBD National Plus!” “Okay, then it’ll get here at 4PM”. “You sure about this ?” . “Yeah, call me at 2PM”. “Alright..”. And I hung up.

At 1PM, I checked the online tracking again and it still said that my passport had been forwarded to Chennai. This is the same thing it had been saying since 8AM. Suspecting that something was wrong – I called up DTDC again “Yeah, they sent it to Chennai, you’ll get it tomorrow morning”. “IS THERE NO WAY THAT I CAN GET IT TODAY ?”. “No”.

I HAVE A FLIGHT FROM COIMBATORE TO MUMBAI AT 7:45PM, FOLLOWED BY ONE TO LONDON AT 2:35AM, MY PASSPORT IS STUCK IN CHENNAI.

Well, I had no other option. I had to knock upon the door of Air Marshal Baruah (my dad :P). Please help me somehow.. I said. He said “Okay, let me see what I can do”. He called up someone who he works with in Chennai. It was decided that someone would go to the DTDC office in Chennai, pick up my passport, come to the airport and hand it to someone else who is on a flight from Chennai to Coimbatore. Unfortunately, there are no flights from Chennai to Coimbatore in the afternoon. The earliest that I could get my passport would be 8PM — but I fly out at 7:45!

Well, I decided that the only way to get my passport and make it on time for my flight from Mumbai -> London would be to DO IT MYSELF! So, I cancelled my Coimbatore -> Mumbai flight. By now it was already 3PM. I booked the 5PM flight from Coimbatore to Chennai, packed all my stuff up and TOOK IT LIKE A BOSS!

I also booked the 8:10PM flight from Chennai to Mumbai. Meanwhile, my dad got his colleague to get someone to pick up the passport from DTDC, and wait for me at the airport.

When I landed at Chennai it was POURING with rain. But sure enough as I left the arrival terminal, Mr. Jayakumar (BLESS THIS GUY, HE ROCKS – Also, kudos to Mr. Ravishekhar for organizing the pickup) was waiting for me outside with MY PASSPORT!

SO I’M FINALLY GOING TO MAKE IT TO LONDON!

See you all on the other side!