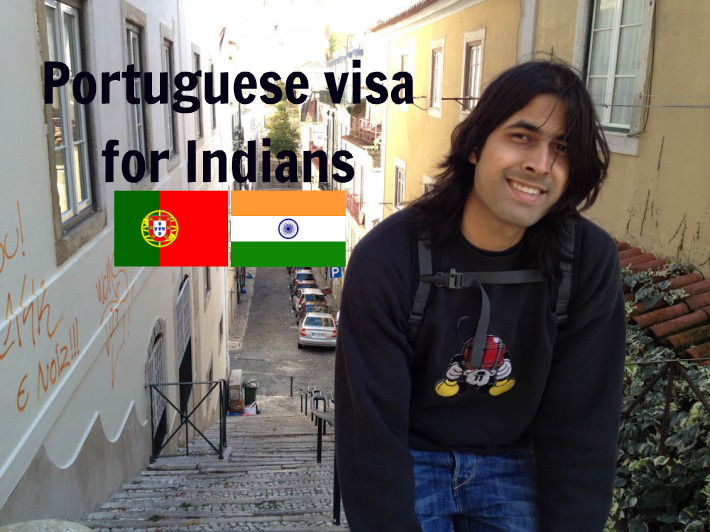 October 27, 2011 /Posted in Europe, Portugal, Visas for Indians /By Ashray

So I was in New Delhi for a while during the launch of MyStreetMarket and I probably should’ve applied for the Portuguese visa right then but didn’t have the time.

Once I was back at Coimbatore I decided that I would hand my application over to the travel agent and they would apply for me. (my passport and documents would basically be couriered to Delhi)

Here are the documents I needed:
- Visa Application Form
- 2xPassport Size Photos
- Bank Statement of Last 6 months
- Flight tickets to and from Portugal
- Hotel reservations for my entire stay in Europe (in Portugal, France and Spain)
- Detailed travel itinerary
- A copy of my UK Visa
- A copy of my previous schengen visa
- My flight tickets to the UK

If this doesn’t already sound like a bureaucratic nightmare, once I arrived at the travel agent in Coimbatore, I was asked:
- Where’s your covering letter ?
- Where’s your air ticket back from London/Europe ?
- Where’re your details for travel within Europe ? (flight/bus bookings ?)

So I explained my trip details to the rather unfriendly lady here and she finally accepted my application (mind you, this is the travel agent, not the embassy!).

A few days later I flew to Delhi for the IIT festival which MyStreetMarket was supposed to be present in. On Friday I get an email saying:

“The EMBASSY has requested the following documents:
- Completed online application form
- Cover letter on a company letterhead stating purpose of visit
- Detailed tickets for places to be visited within Europe”

So I called up Maestro travels in New Delhi (this is an associate travel agent that my passport and documents had been sent to..). Spoke to a Mr. Kehar Rajput who was especially rude. I explained to him the terms of my visit and he replied with “I’m not sending your documents to the embassy until they are complete”. So I asked “So it was YOU requesting all those extra documents, not the embassy ?” to which he replied “I know what the embassy wants. Do YOU go to the embassy every day or me ?”. So I politely explained to him that I have applied for a ton of visas before and am quite familiar with the procedures involved. I couldn’t believe his next sentence: “If you think you can submit your application like this, then go ahead and do it!”.

Well, I didn’t really have much of a choice, I visited Maestro Travels rather shady office in Bhikaji Cama Place, New Delhi. Mr Rajput wasn’t in but there was a lady who repeated the same stuff. “You need to show proof of where you’re going, how you’re going, why you’re going”. Hmm.. I bet even ex-cons don’t need to show so much proof of this and that. So I explained to her that I would be travelling within Europe by car. “Where’s the proof of that ?”. Exhasperated, I decided to take my documents and head to the VFS VISA office myself.

But the story has just begun. I took all my documents and went to Nehru Place. The VFS office is in the International Trade Tower. And a tower it sure is! I went up to the 8th floor (which is officially the 2nd floor cause there are all these S1,S2,S3,L1,L2,L3… levels in the middle). The guard on duty there said “Oh it’s lunch time from 12-1PM, come back after 1PM”. I took the elevator down and realized that it moves at 1Meter/minute. By the time I reached the ground floor it was time to go back up.

So I took the stairs again, all the way up to the 8th floor and people were queuing up there. No shit! People in India behave really well in VISA offices – they actually queue up properly and don’t cut in front like at other places! After all, that would be a horrible reason for VISA rejection – “Doesn’t know how to queue properly..”.

The guard at the entrance says “Oh! What’s in your bag ?” “Well, I have a laptop, camera…” He begins shaking his head. “You can’t go in with that.” “Okay, so can you keep it somewhere ?”. “No, go down to the ground floor, there’s the UK VISA office there, they’ll keep it for you”. So off I go, back again down 8 floors by the stairs to the ground floor. I had to fill in a registration of sorts to deposit my bag before I ran up all 8 floors again to finally enter the VISA office.

So once I’m in there I realise that I’m not carrying enough cash so I ask the guys if they accept cards. Nope! Please bring cash. I assumed that the VISA cost Rs. 607 so I ran down 8 floors to the Citibank ATM in the next building and got Rs. 2000 – just in case. Ran back up 8 floors and my turn still hadn’t come.

Finally my token number (208) came up and I went to the guy at the counter. He looked through all my documents and said that they look good. Except for one small detail, I had filled up the wrong application form. Apparently the Portuguese embassy no longer accepts hand written forms so you need to fill up an online form which then can be printed out. Not surprisingly this tiny but SUPER IMPORTANT detail isn’t mentioned anywhere on the website. The guy at the counter was nice enough to say that I could come back until 2:30PM (it was ~2PM by then..) and he would still accept my application.

Again, I ran down 8 flights of stairs, picked up my bag at the UK embassy and tried to find a plug point (in vain..) to plug my laptop into so that I could use some internet! Since the guard who was next to the metal detector wouldn’t let me use the two extra slots on his bracket, I had to run to Nehru Place, a nearby market. I ran into a Cafe Coffee Day hoping that I would be able to plug my laptop in there but they had no flat pin plug points. (Bah!) So I paid for the bottle of water I had ordered and said I would come back later for the change and ran out. I ran into Costa Coffee and the waitress was right next to the door so I said “Do you have any flat pin plug points here ?” And she gave me this “I don’t think we serve that here..” look :P So I ran around the cafe like a maniac bending over and looking at all the plug points there. Unsatisfied with my search, I bailed on Costa Coffee. This time I ran around with a mad look on my face asking people “Where’s the nearest Cyber Cafe ?”.

I ended up at a Cyber Cafe just a few minutes down the road where I had to give an ID to use the computer. I filled in the so called “Online Application Form” which basically just fills in typed values into the PDF that is the regular form. There’s no reference number and no actual submission takes place. You just have to print it out and carry it with you. Way to modernize stuff Portugal!

So I took my printout, buckled up my bag and RAN! I stopped at the UK Visa Center (obviously to deposit my bag) and ran up 8 floors once more (I was getting pretty good at this by now :P). I was sweating profusely by this time and the guard didn’t want to let me in because it was already 2:35PM. However, when he asked the guy at the counter inside, I was let in once again.

You guessed it, I ran down 8 floors again, to the next building’s Citibank ATM and withdrew the rest of the money. Ran all the way back up and paid up, finally it was done.

I took the elevator down and 2 hours later, was back at the ground floor :P

But it’s not over yet. The Portuguese embassy says that they take 10 working days to process your visa. (I guess it DOES TAKE a lot of time to read ALL those documents that they asked for :P). I thought I had 9 working days before my departure to London but apparently Diwali and something called All Saints Day are 2 holidays that fall in the middle.

So fingers crossed. Lets see how it unfolds :D