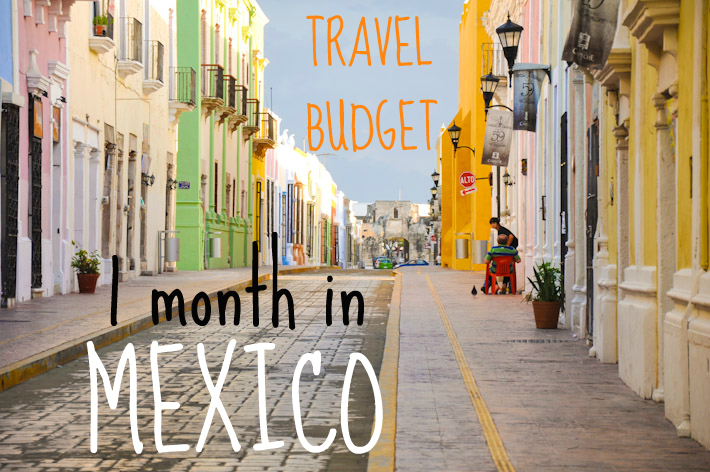 One month in Mexico – how much it cost us..

We spent a month in Mexico and even though 2 of those weeks were during Christmas and New Years, we ended up spending just short of USD 1800 in total for both of us.

The places we stayed at

In Cancun we stayed at Hotel Hacienda de Castilla

which was an extremely nice place for the $20/night value. The hotel is in downtown Cancun and while you do have to walk through some shady streets, it’s still centrally located and very accessible.

. It was $34/night but we enjoyed it as we had a kitchen and ended up cooking for ourselves. A delicious meal in Casaejido

The included breakfast there was delicious! Breakfast at Mama's Hostel in Tulum

In Campeche we stayed initially in a hostel called Pirate Hostel but after one night there we decided to move to Hotel America Centro – a place right in the center of the city for $50/night – this was during Christmas week so prices were very high. We decided to do an Airbnb in Merida and it ended up costing us $28/night. The room was a bit outside the city center but we had a balcony so we managed to do all our laundry and dry it there.

Palenque was a pleasant $18/night in the Jungle of El Pachan. We did spend a fair bit on food here as Don Muchos was one of the only eating places in the area. Excellent food though! The excellent atmosphere at Don Muchos

From Palenque we headed out to Lagos de Montebello but stopped and paid $12 for a night of pooromatherapy in Comitan.

Lagos de Montebello cost us another $18/night for a cabin in the woods. Our crib in the jungle

We headed to Tuxtla after this and since it was New Years eve, the rates were pretty high all across the board. We ended up staying at Quality Inn for $53/night.

A short pit stop in Oaxaca (a beautiful artistic city) cost us $28/night – again through Airbnb. Zara around the world!

After this, we moved to Metepec to stay with Rodrigo, one of our friends. We stayed a few days here before we moved to Mexico city. At Mexico city we initially did an Airbnb for 2 nights but after a horrifying experience (read Zara’s post about it) we ended up moving to Hotel San Diego in the city center for $32/night.

So those were the places we stayed at.

We mostly ate local food which usually ended up costing about $12 per meal for both of us. However depending on where you eat this can be much cheaper. Many of our meals came in at around $5 or so as well.

We also cooked at home whenever we had the opportunity to do that. Super markets in Mexico have decent prices, maybe a bit cheaper than Europe and at par with the US. When you’re traveling long term there is always the odd day that you crave something that you order and you know what you’re going to get. McDonalds was very handy in this respect and especially so because of their AMAZING Deluxe Angus burgers! 74 pesos (USD 5.5) will buy you a combo meal which includes a drink and fries/salad.

We didn’t take any flights in Mexico. There are excellent buses there and you can make it all across the country using them. Bus tickets however aren’t cheap and will cost you anywhere from $10 to $40 per person depending on distance, duration, operator, etc.

Also, as Mexico doesn’t have a rail or alternate transport system you should try and buy your tickets at least a day in advance since some routes can get quite full (eg. Oaxaca to Mexico City). The buses are extremely spacious and comfortable (like business class airline seats) and all have a bathroom on board. However, we can’t say as much about the roads since they tend to depend on the state that you’re in.

Schedules for ADO buses can be found at the ADO Website.

You can often take Colectivos (shared taxis or buses) from place to place. A little basic Spanish will also go a long way though English also works in bigger places. Colectivos are cheaper than taking an ADO bus and sometimes cover routes that ADO buses will not take. Taking a Colectivo out of Palenque

The metro rail system in Mexico city is very well priced. For 3 pesos (approx USD 0.20) you can ride from any station to any other station, even with changes in between. We ended up riding the Metro a considerable amount and witnessed all the strange things that happen on the Mexico city metro. Definitely entertaining!

There is a whole range of entrance fees in Mexico. Chichen Itza was the most expensive and cost us around $10 each. Everything else cost us around $3 per entrance. The other fees will vary between these two extremes.

We bought a telcel 3G sim card which I plugged into my iPhone. So regardless of wifi availability, we were able to access the Internet in most places. The sim card cost us 150 pesos and we got a 2gb data package on it for another 200 pesos. For more details check my post on Telcel’s 3G performance.

So that’s the overall breakdown of our costs. If you have any questions do please ask in the comments. The above costs include everything we spent money on in Mexico except the air tickets to get there.

Are you going to Mexico soon?

Check our tips to Travel Around Mexico City on a Budget!