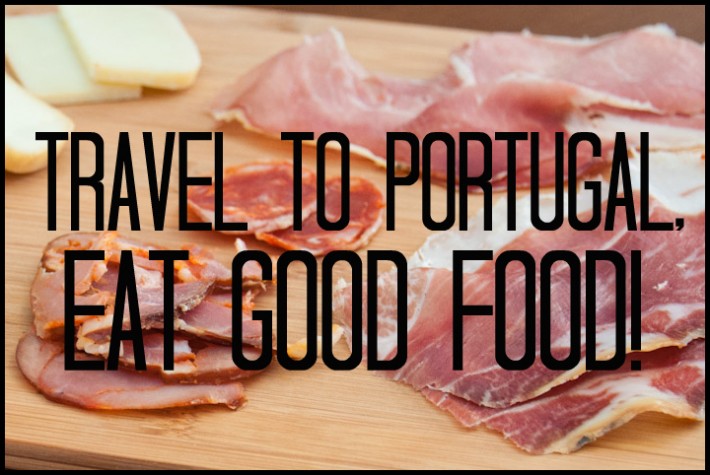 More traditional dishes a Portuguese Grandma would feed you

Read part 1: 10 Traditional Dishes a Portuguese Grandma Would Feed You!

After the success of 10 Traditional Dishes a Portuguese Grandma Would Feed You, I thought it’d be a good idea to dig in a little deeper on traditional Portuguese food. After all, we’re always hungry at Backpack ME and yours truly proudly carries her Portuguese appetite around the world…

People think that Portuguese food means grilled chicken. Perhaps with a little bit of peri-peri – thanks to Nando’s for the stereotype! It’s true that the Portuguese love their grilled chicken, but our cuisine goes way beyond that and in this article we’d like to focus on things that are muito Portuguesas, that is, oh so very Portuguese! We care for meats but we also take our fish very seriously, as we’re a country by the sea. Vegetarians don’t get as lucky around here though.

But for everyone else, let’s get the juices flowing…

In my previous post about Portuguese food I made the big mistake of not including any octopus dishes. Polvo is considered a delicacy in my country and it is even eaten in special occasions such as Christmas Eve dinner. Also, during summer, cold octopus salad is commonly served as appetizer in seafood restaurants.

But if there is one preparation that makes octopus stand out in all its glory, that would have to be Polvo à Lagareiro. Roasted octopus drenched in the finest of olive oils makes for a simple yet decadent serving of comfort food. It tastes even better with a view out to sea! Say OLA to my absolute favorite dish in Portuguese cuisine!

If you learn one food related word while traveling in Portugal, that will probably have to be bacalhau. Salted cod fish is one of our staple foods. Amongst the hundreds of recipes that use this fish as star ingredient, cod with cream is a popular and beloved one. Shredded cod and potatoes baked in the oven, softened up by generous amounts of cream. A smooth concoction of bold fishy flavors along with delicate potatoes and dairy. Unlike the paella from our brothers across the border or the risotto from further ahead, Portuguese seafood rice is wet, almost soupy. A variety of fishes and other creatures from the sea swim in rich tomato infused broth, allowing you to try what the open sea tastes like. Prawns, lobster, white fish, clams, crab and others make Portuguese seafood rice a truly special treat. Originally from Porto, this mighty sandwich’s name translates into Little Frenchie. Urban legend says that it was the adaptation of a French Croque Monsieur that a returned immigrant made after coming back to his motherland. More than cheese and ham, this sandwich packs an extravaganza of heart-attack inducing cured meats, swimming in gravy. The sauce is what makes Francesinha special, and many places in Porto pride themselves in having a secret recipe for it. Take your knife and fork, ’cause Francesinha ain’t no sandwich to eat on the go! This is one of those dishes that grandmas love and grand-kids take some time to get used to. Some would call it an acquired taste. Portuguese Grandma would tell you that is it all about a smooth combination of rice and chicken, almost as if not giving importance to the fact that what seasons the whole thing is blood. Yes, chicken blood! If you’re going to kill an animal for the sake of eating, you might as well make use of it all! Blood is actually flavorful (lovers of blood sausage out there would know! and vampires too…) – so put all prejudice aside and allow yourself to enjoy a warm serving of Cabidela rice whenever you are in Portugal. It’s funny how people tend to think of France when they think of eating snails, but the truth is that in Portugal they are just as popular. Consumed mostly in summer (along with ice-cold beer) snails are not much of a meal, but more of a snack. They are buttery and cooked with herbs and garlic. It might sound yucky to some, but it tastes yummy to many others!

I hadn’t tried snails myself until recently (as they are mostly consumed in the South and I am a Northern girl). But last summer we totally went for it, and there’s a video to prove it here! Think meaty, rich and intense: this is what roasted young goat is all about. Very typical in the Northern regions of Portugal, cabrito is mostly served with oven-roasted potatoes. This festive dish is sometimes cooked on wood-fire oven, taking several hours for the meat to be cooked, soft and easily pulled off the bone. There is just something about this preparation that feels like Sunday. What do you do when you live in a country surrounded by coastline with abundant and delicious seafood? You create Caldeirada, a fish stew where anything goes and everything together tastes glorious.

The ingredients in Caldeirada depend on the catch of the day, but would normally include a variety of fishes, shellfish and other seafood, cooked in a broth similar to the one used in Seafood Rice. A lot of tomatoes, herbs, a variety of spices and, often, white or port wine, make sure Caldeirada tastes like a day out walking by the beach. Bitoque stands for something as simple as steak and fries, topped with a fried egg. You might think this is no extraordinary creation, as it has certainly been done before. But I can guarantee you that the way those thin beef steaks are marinated with heaps of garlic and olive oil will convince you that bitoque is not just a steak. No dish says Lisbon as sardines grilled on charcoal – so simple, so good! It’s all about the freshness of the fish and the smokey taste from the grill. If you order sardinhas in a restaurant, they’ll probably be served with potatoes and veggies. But out in the streets, during the summer festivities of Santo Antonio, they can be eaten on the go atop a piece of thick corn bread, with roasted peppers salad. Yes, a generous amount of olive oil will be making it all wet and delicious, because this is Portugal! Whenever you travel in a new place, make friends! Let them cook for you or take you out to dinner. No food experience can compare to sharing a meal with someone from the place you’re eating in. In some parts of the world, you can easily accomplish this thanks to brilliant ideas like Eat WithLocals.

Food is a great way to narrow cultural bridges. And, in Portugal, it’ll be one of the best ice-breakers you could use to mingle with us!

Eat in Portugal like a local! Get our Lisbon Food Guide