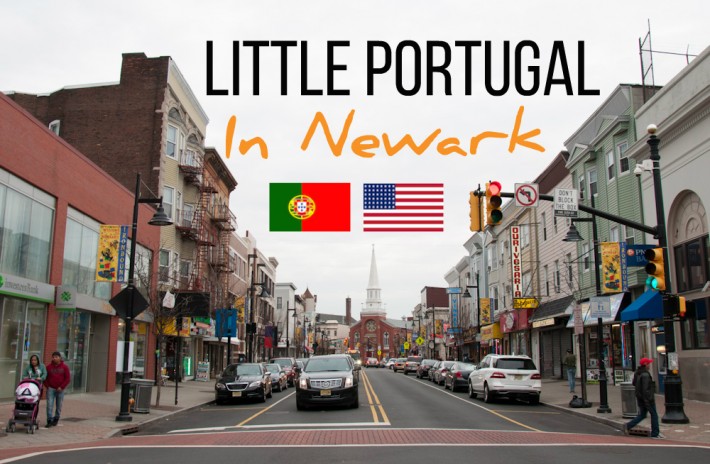 We’ve traveled to many countries around the world and, very often, we’ve come across pockets where the Indian community tends to concentrate. From the top of my head I can think of Bur Dubai in Dubai, Little India in Singapore or, oddly enough, even the city of Cuenca in Ecuador. But it’s extremely rare to come across anything Portuguese. And that’s why when I came to know about what they call Little Portugal in Newark, I thought to myself “Yeah! I’m finally going to be able to eat some proper Portuguese food while staying in New York”! Newark in New Jersey, is home to a sizable community of people of Portuguese descent.  The concentration of my compatriots is no longer as high as it used to be back in the 60s. It has now been diluted by neighbors hailing from Brazil, Ecuador and other Latin American countries. Still, things around Newark can get pretty Portuguese.

It’s funny how somehow the people of one of the poorest countries in Europe, Portugal, and their counterparts in South America, Ecuadorians, have come to co-exist in Newark. The place where immigrants settle or anyone lives even inside their country of origin is strictly related to their socioeconomic background and level of income. But it’s also noticeable how, in middle to low income areas, communities seem to be tighter, families and groups of friends are larger and the “street life” is clearly more lively than in richer places. The Ironbound district sits to the left of Penn Station in Newark when you arrive from New York  – and the trip by train takes less than half an hour. This is where one should go to get acquainted with Portuguese culture while in the USA. You may not get to enjoy the sensational landscapes of Portugal while you are there, but you will definitely get a chance to practice your Portuguese, if it exists, or sample authentic Portuguese (sea)food. The food hasn’t really been adapted to foreign tastes, because the clientele is mostly of Portuguese origin. And you can even shop for souvenirs of that trip to Portugal you haven’t got around to taking yet! The first thing that stands out when you walk down Ferry Street (the heart of Newark’s Little Portugal) are the businesses with names in Portuguese. We’re not talking only about restaurants and cafes. Knowing how Portuguese people tend to adore food and miss their own specialties while abroad, these of course had to be covered! There are also lawyers with Portuguese surnames, travel agencies offering deals to the Azores and even branches of the most popular Portuguese banks. Restaurants might not look particularly Portuguese on the outside, but on the inside they serve dishes cooked as well as if in the most typical of Portuguese towns – served along with a basket of assorted fresh bread, as it should be! We got to enjoy Clams Bulhao Pato Style as well as Bacalhau a Bras (a salted cod fish and scrambled eggs dish). I didn’t even need to close my eyes to feel like I was in Portugal. The ambiance of the restaurant we were sitting at, the black pants & white shirt combination of the waiter with a fluffy mustache, people chatting in Portuguese in the background, folks sitting at the counter enjoying small cups of coffee while watching a football match on TV… It didn’t really matter where we were geographically speaking in this world. This, right here, was Portugal!

Walking around the Ironbound we came across a mural depicting the history of this district: Mural of the history of the Ironbound District

This corner of New Jersey has been a working class neighborhood ever since it came about. In the 19th century, this was a highly industrial area. Portuguese people started arriving around the early 1900s, followed by their Galician neighbors from Spain. Working mostly in the iron industry initially, the Portuguese started establishing themselves and branching off into different businesses. Now a days, along Ferry Street, you can visit many Portuguese jewelers, sports stores featuring the official jersey of the Portuguese national football team on display, fish markets (selling fresh sardines flown in from Lisbon during season!) or wine stores. Furthermore, there are supermarkets that save a considerable amount of shelf space for products that a regular Portuguese household would normally count on. Salted cod fish, olives and lupin beans in brine, kale for Caldo Verde, regional cheeses from mainland Portugal and the Azores islands, cured meats and pork cuts that would look odd to the average American consumer (for stews like Cozido a Portuguesa and Feijoada), several brands of olive oil and, of course, Portuguese coffee brands. Cured hams hanging at a supermarket in Newark, just like they would in Portugal

If there is something quintessentially Portuguese and that the Ironbound doesn’t disappoint in, it is Portugal’s love affair with coffee and pastries. For the usual espresso drinks, custard tarts and other treats, there are a few bakeries with Portuguese names ready to cater. These are also the establishments to come to enjoy fresh bread, where the simple (yet magical) combination of flour, water, salt and yeast is baked into delicious loafs, not very readily available elsewhere in the region. Gastronomy aside, the Portuguese community of the Ironbound has made sure to stay close to their roots. Over the years, different cultural and sports related initiatives have taken place for people to feel closer to home and to have a distinct voice of their own in their new corner of the world. LusoAmericano, the local Portuguese-American newspaper, has its headquarters in the very center of the district. Now-a-days, the Ironbound has a good reputation as a dining destination, something that’s been building up since the 60s, when the local population was over 50% Portuguese.

I hear Little Portugal reaches its peak of fun and glory on the 10th of June, the Day of Portugal. If you are around New Jersey on those dates, pay my country a visit and let me know how it goes! How to get to Little Portugal from Manhattan, New York:

Once you reach Penn Station coming from New York, exit the station to your left and walk West for just a couple of minutes until you reach Ferry Street. Little Portugal starts the moment you can smell the coffee and freshly baked pastries scent coming out of the nearest Portuguese cafe!