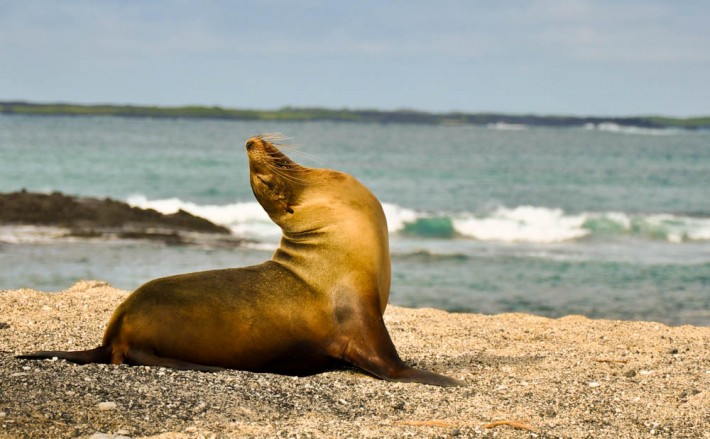 Isabela Island was our second home in the Galapagos, after Santa Cruz. Having spent some time in both islands, I could safely say that if you divide your island hopping days between the two, you’ll see and experience a fair share of everything that this wonderful place has to offer.

There are daily boats connecting both islands. Trips from Santa Cruz to Isabela, during regular service, happen twice a day: around 7AM and at 2PM. Single journey tickets costs USD25 in the early morning and USD30 if you are as lazy as us, and go after lunch. In about 2 hours, same duration as most day trip boat rides, you’ll reach Isabela’s port: Puerto Villamil.

Puerto Villamil is rather different from Puerto Ayora. Although Isabela is the largest island in the entire archipelago, this does not reflect on its only town. Puerto Villamil’s roads aren’t paved and you can get from one end of the town to the other walking. It’s considerably more rustic than Puerto Ayora.

There are a variety of day tours you can take from Puerto Villamil, focusing mainly on: volcano treks, wildlife spotting and snorkeling/scuba diving. After a lot of thinking, we decided to skip the volcanoes. Although we hear the rocky landscapes are impressive, we thought we’d concentrate on observing animals this time and turn ourselves to sea rather than to the in-lands. 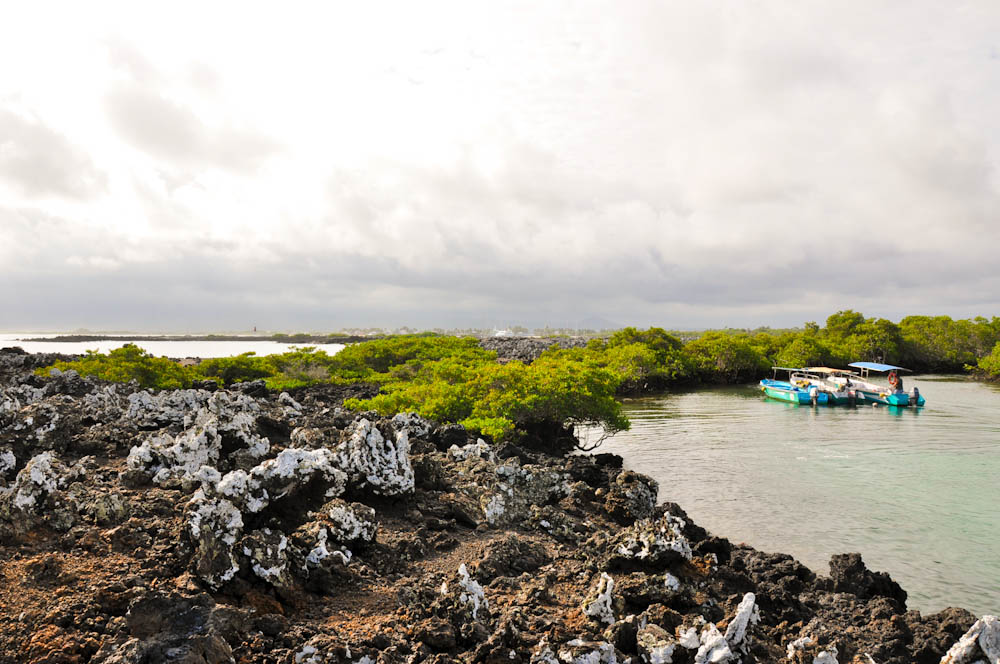 This was the first tour we took out of Puerto Villamil and, hands down, one of the best experiences during our stay in the Galapagos. Instead of a deadly boat trip to a far away island, we took a 5 minute boat ride to a little island called Tintoreras, right across Puerto Villamil. Tintoreras is the Spanish name for white-tipped reef sharks, very common around this area.

In such a short time (the total duration of the tour was around 3 hours) we spotted playful sea lions, manta rays and turtles swimming close to our boat, a huge colony of junior marine iguanas and, what was more impressive, penguins! Until we visited Galapagos, I was convinced penguins only live in very cold weather, but there they were, swimming and splashing around under the burning sun. The “Galapagos Penguin” is the only species of penguin that actually lives north of the Equator and they’re believed to be able to survive in this area due to cold currents that bathe the island.

Tintoreras is looked down upon by some tourists because the trip happens “right there”. Some might feel if you are going too close to where you already are, chances are you won’t see something that different or special. But, at least in this case, that idea would be wrong! In Tintoreras you get to see such a high concentration of wildlife in such a short time, and so that makes every minute of the tour absolutely worth it.

After going around on the boat and walking in Tintoreras itself, the tour ends with a little time of snorkeling. It’s not the best spot for snorkeling in the Galapagos (not that it’s bad either) but a very easy one for those not used to practicing this sport. You don’t even have to swim as you can let yourself go with the current towards the boat that will be waiting for you. And what will you see? A variety of colorful fishes, penguins and turtles! 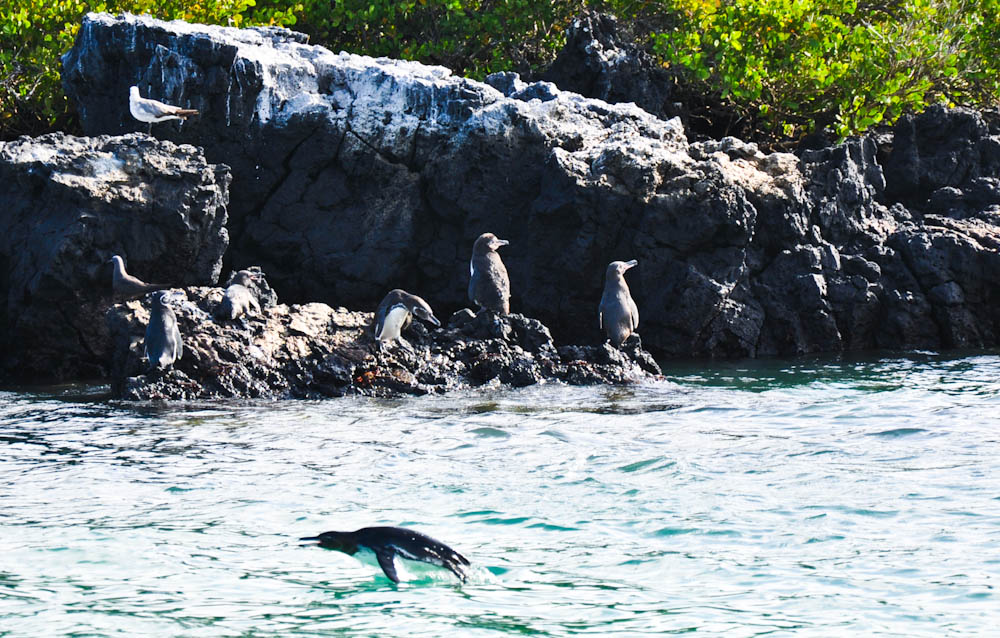 To reach Concha de Perla one must follow a little marked path right next to the Port where boats dock. You only need to walk for 5 minutes and you can access it for free.

This area is a natural bay with relatively calm transparent waters, ideal for swimming and snorkeling. We didn’t bring snorkeling equipment but still had a great time dipping ourselves into the water. Other snorkelers that were around at the same time, claimed to have spotted manta rays, turtles and even baby sea lions! It’s funny how you almost take these things for granted after a few days in the Galapagos. These guys are everywhere!

As you swim towards the areas that connect Concha de Perla to the open sea, be careful as the current gets really pushy. There was a point when we were doing what I call “sea treadmill”: you swim, swim, swim… but you don’t move! So we ended up parking ourselves by the rocks, where crabs were looking down on us with a mocking expression, until we gathered our strength and actually managed to swim back to a calmer area.

Concha de Perla proves once again that in the Galapagos you will come across a lot of places, some popular and others semi-hidden, that will make you feel the world around us is just so beautiful!

The Tunnels are allegedly the best tour you can take when visiting Isabela and one of the most acclaimed in the entire Galapagos, at least when you explore by land (not on a cruise ship). Our experience, though, was a little bittersweet… or bittersick. To reach Los Tuneles we went for more than 2 hours on a rough motor boat ride, that would reduce speed every time we could spot some marine life: sharks, gigantic manta rays (4 meters and more!) and turtles. Ashray started feeling sea sick as the boat was extremely bumpy.

Before reaching this promised land called The Tunnels, you pass by an enormous rock called Roca Union, where we spotted out first blue footed boobies, one of the main species Galapagos is famous for, and that we were still missing! Next to the several birds resting in this rock that is surrounded by nothing but deep sea, there were also some sea lions napping. This scenario was out of a movie. Probably an animated movie!

We finally reached Los Tuneles where things calmed down a lot. This place is the perfect snorkeling spot! Calm as an aquarium, the waters are protected by the lava formed tubes and rocks, and everything is crystal clear. Even before you put your mask on and head into the water, you can already spot the sea life from the boat itself.

In what other natural place in this world, would you be able to snorkle in such shallow waters, and swim along manta rays, white-tipped reef sharks, penguins, turtles, star fish and a variety of other colorful fishes? A couple from our tour group even saw an octopus! And other people I read about have mentioned sea horses too.

The regular tours to Los Tuneles include 2 snorkeling trips in different spots. We had to skip the second one after Ashray had already donated his breakfast to the seas. It’s funny how so many little fishes came to the surface to eat his semi digested food! The marine life observation, for us, started right there. Hungry little things… as if there wasn’t plenty of food all around. It was a treat, I guess.

So reviews were right about Los Tuneles. This is such a unique place! The landscape is absolutely breath-taking, both out and inside the water. There is life all around! 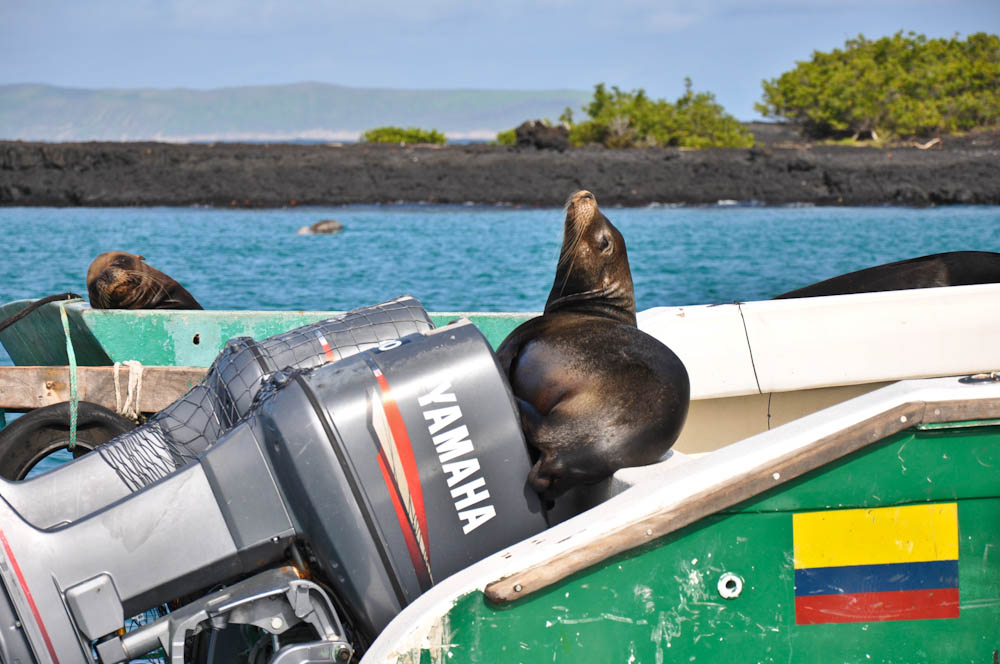 And this is how we kept ourselves entertained for a couple of days in Puerto Villamil, Isabela, before returning to Santa Cruz island for the end of our trip in Galapagos.

Read part 4/4 if you want to know what life is like in Santa Cruz’s highlands and how we never wanted to leave!