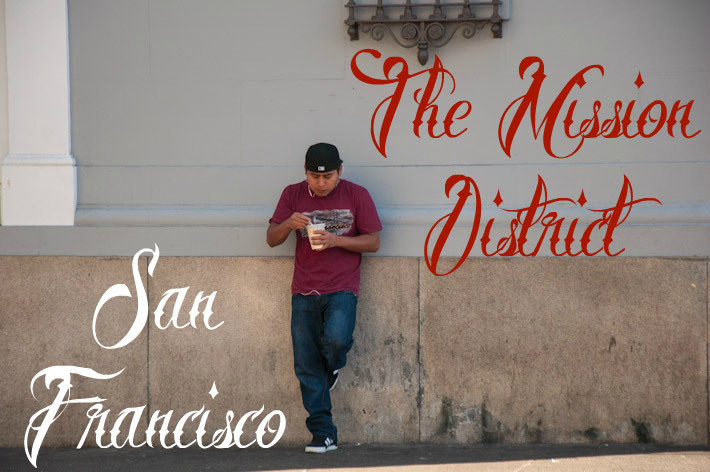 It’s not a myth: San Francisco is as hilly as they say. As I walk down the hill we are living in, up in the Eureka Valley, the world around me seems to change. Up there, there are days when you wake up inside the clouds, that do not allow you to see much when you peek outside the window.

Walking down, I make my way to The Mission District, the most Latin of San Franciscan hoods. I walk down pretty fast, the inclination is on my side, but the clouds seem to go even faster than me. I pass by the posh Noe Valley with its small boutiques and corner cafes. I see people walk out of Whole Foods with brown paper bags full of organic pricey food. The lower I go in the valley, the hotter it becomes. It’s only a 20 minute walk, and I leave behind elegantly manicured neighborhoods, to enter what I’d already dare to call Latin America. Bienvenidos to The Mission District Outside The Mission BART Station. On Sundays, it is common for men with microphones to be preaching Catholic values in Spanish around here.

The Mission is my favorite area in the entire city of San Francisco. Not only the temperature is warmer down here, everything feels hotter too. There are no contained feelings on Mission Street and around it. Baby strollers rolling into bagel shops was the world up the hill. Down here, I see brunette ladies with overloaded bags full of groceries. Cafes have been replaced by fresh fruit and vegetable stores, that display heaps of aromatic cilantro, tomatoes, varieties of potatoes and, of course, corn products in all shapes and sizes. Most of the population in The Mission are immigrants originating from Southern and Central America. A lot of them have already been born in what people tend to call “America”, although I’d say Americans is what they’d be anyway. Spotted in Mission Street. I had to google this to understand what it actually meant. It is the ad for an event on October 14th. October 14, Indigenous Peoples Day, was reclaimed from the genocidal legacy of Colonizer Columbus.

Walking around Mission, I decide to do a little experiment and see if I’d go by the entire afternoon without speaking a word of English. Absolutely no problem! I buy a bag of tomatoes and receive a “You’re welcome, Preciosa” as an answer. I like that! I got used to a little flirting while shopping at the market in Santiago de Chile… and now a simple self check-out at the bigger supermarkets doesn’t cut it for me anymore. Grocery store in The Mission

If it wasn’t for the hipster influx that The Mission has been receiving in recent years (and who can blame them, really… this place rocks!) I could almost forget I am in the USA. Instead of freshly brewed coffee, the corner stores smell like spiced carnitas waiting to land on someone’s corn tortilla, or like the vapors that rise up in the air while tamales are being steamed. It smells like Latin America in The Mission, it smells bien rico! In the Mission, many restaurant menus are printed in Spanish by default

Residents exchange words in Spanglish. They tend to be loud and laugh a lot. Like just back home. There are vendors selling diced mangoes spiked with chili flakes in corner carts, and people eat them out of a transparent plastic bags. Inside stores, packages of corn tortillas go half price at the end of the day. Chili peppers come in at least 10 different varieties. And tamarind and Jamaica flowers are sold wholesale, to be infused at home in order to make aguas frescas. Mom and daughter share some snacks in The Mission

Outside, a young man grills small chorizos which you can eat on the go tucked inside a bun. While a chatty lady sells religious figures, which seem to be quite popular with those passing by after work. You don’t see Starbucks around here. But you do see a church in almost every street. I guess people’s creed does vary a lot here when compared to the rest of “The Bay”. Mexican Lucha Libre masks on sale at The Mission I finally make my way up-hill again, which definitely takes longer than the way down. The breeze is stronger now, while the density of people decreases and suddenly everything feels quieter.

I am home now, and I can observe the world outside through the massive window in our Airbnb apartment. It is a pretty spectacular view! Down there, in San Francisco, there are filthy rich people running tech companies. There are hipsters and hippies… homeless and immigrants… people living the life, and others struggling to get by. There is a lot of “in the middle” too… there is plenty of pretty and ugly to go around. There’s tons of life. And there’s a piece of my beloved Latin America too, within the streets that make The Mission District. I miss it a lot, but the good thing is that it is only 20 minutes away… downhill, that is.