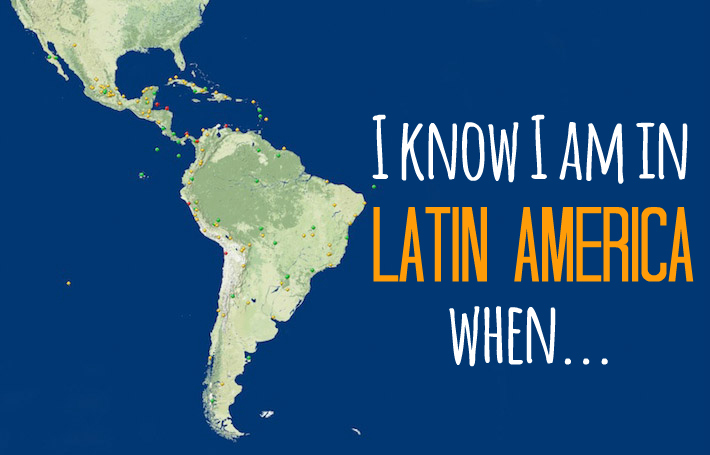 I know I am in Latin America when…

A couple of years ago we traveled around Latin America for about a year. During that time, this side of the world started to feel like home. Right now, making Santiago de Chile our base, we’ve taken that homely feeling to a whole new level. Coming back feels familiar, and that feels good!

Latin America is welcoming. And when you spend some time around here you realize that there are a bunch of things so peculiar from this side of the world.

[Disclaimer: I don't mean to label all Latin countries as being the same - please read on with a sense of humor.]

I know I am in Latin America when…

After half an hour I landed here, I had already seen more cleavage than during the previous past month spent in India

It’s not that every country is hot all year long (well, at least not temperature wise) but Latin women sure carry their assets in a sexy and proud way!

Everybody gives money to beggars

Even in Cuba, when some people may have little money themselves, they always share. I believe this might be a side effect of how religious people tend to be. Whatever the reason is, you can feel a strong sense of community.

Even inside a flight on South America, you’re reminded of this when you see a man queue up to use the in-flight bathroom with a bible in hand!..

Colombians set the trend when it comes to trousers for ladies in this side of the world. Their particularity? They are the pant equivalent to the wonderbra, that is, they push up the butt and they are called levanta cola. It’s an indirect way of saying “in your face!” I know things are changing and many countries around here are opening up to international foods and even vegetarian options – particularly in big cities, of course. But in general, it is still very difficult to walk into a regular restaurant and choose a vegetarian item off the menu. The other day I was explaining to a girl in Colombia what veganism was. Her face was priceless: whAaAAaaat?! She couldn’t believe some people not only don’t eat meat or fish, but they don’t take milk, eggs or things like honey either.

This is starting to look normal to me by now. Girls my age have kids who are probably in high school already and, who knows, they might even become grandmas soon.

This song about Che Guevara is used in all sorts of occasions in many Latin American (Spanish-speaking) countries. We’ve listened to it with great pleasure in restaurants and cafes, during political demonstrations (like this one in Ecuador) or simply performed by street artists. Any time, anywhere, and it does tend to be quite touching. You’ve gotta love the spontaneity and lack of shyness of most Latin people. They sing out loud when a song they like plays on the radio and they may start dancing salsa on any corner as long as there is a speaker somewhere sharing some contagious rhythms. There is nothing to be shy about – you must enjoy life everyday! Even while walking around in the supermarket.

Family is still a priority

This is obviously a very generic statement and things vary from case to case. As someone from Europe who’s spent solid time both in Asia and Latin America, I always say that this part of the world tends to be the best when it comes to family values. Not as asphyxiating as some Asian cultures, not as individualistic as some other Western countries: somewhere in between, offering the best of both worlds.

I know this applies to other countries around the world too (I would know, I am from Portugal!) but in most countries around Latin America people go wild with football. The World Cup just took place and this was beyond OBVIOUS all around us! You will come across many football fields. The smallest towns may have only a handful of houses, but there has to be a pretty decent football field somewhere nearby. Sometimes, you may see basketball courts too, but those will inevitably be used to play football. What to do, it’s in the blood!

Locals refer to Indians as “Hindus” or “Turks” New Horizon Comida Hindu: one of our usual restaurants in Santiago de Chile

When toilet paper goes in the dustbin

“Why do they use toilet paper if their sewage can’t handle it?”, says Ashray. The local sewage systems don’t often manage to swallow used tissue. So you’ve got to roll it up and dispose it on the garbage bin, please.

When every country has a different word for “avocado”

In Chile, Uruguay or Argentina avocados are paltas (there’s palta in EVERYTHING here in Chile, by the way!). But in Colombia or Mexico they are aguacates. In some other countries, they even call… well, “avocados”, just like in English.

Actually, many food related words vary from country to country, even though they might be sharing Spanish as common language:

Everybody is addressed respectfully

I learnt Spanish in Spain. Over there, young people and those who are close to you are referred to as “tu”. “Usted” is a respectful form reserved for older people or formal situations. But in Latin America, usted is the most common form to address people. It sounds very polite, but it’s just the standard way. Manjar is the food of the gods

Also known as dulce de leche or arequipe, it is everywhere in South America! It is a thick milk-based sweet used to spread on bread just like jam, or as a very common filling on pastries and cakes. Manjar has 1001 uses in South America!

Everyone is “bonita, preciosa, maravillosa!”

A plain hello doesn’t cut it around here. As a lady, you shall be referred to as amor (love), bonita (beautiful), preciosa (even more beautiful), maravillosa (wonderful) or even divine! Quite often, several of these adjectives will be combined in one sole sentence. You’ll feel like a star!

When you can’t have an abortion, even if the mother’s life is in danger

Abortion is illegal is most Latin American countries, and in many cases even without exceptions. This means that if the mother’s life is in danger, for example, no exceptions shall be made. Neither if you were raped, for example. This bothers me a lot and I think religious thinking is responsible for this. This is one of the things I dislike about Chile. A lot of people who support the legalization of abortion here in Chile complain regarding the current “moral dictatorship” that doesn’t allow individuals to decide for themselves. Mega kudos to Uruguay for being ahead of the curve in this and other matters here in South America! Cartoon regarding the possible legalization of abortion in Chile

Asians have no doubts about this! But in Latin America, we have sweated our souls out in places that have ACs installed but just don’t bother to turn them on even if the temperature is well over 30C. Is there an alternative method to beat the heat? YES! Drinking cold beer seems to be the answer!

10 year old’s making out (with tongue!) in the subway are not a rare sight

First time we saw this was in Mexico. Both of us looked like this: Since then, we have come to terms that kids start making out (adult style) really young around here.

Plain yogurt is nowhere to be found

It’s there, yes, but it’s just that it is so well hidden.. Common yogurt is fruit flavored and it tends to be very sweet.

Papaya is served everyday for breakfast in hotels

Also, I know I am in Chile when…

Checking in for a flight you are asked: “What side would you like your sit on? Sea or Cordillera [Andes mountain range]?” Landscapes in Chile are something else… taking a regular flight is like taking a wonderfully picturesque aerial tour!

You know you’re in Latin America when?!…