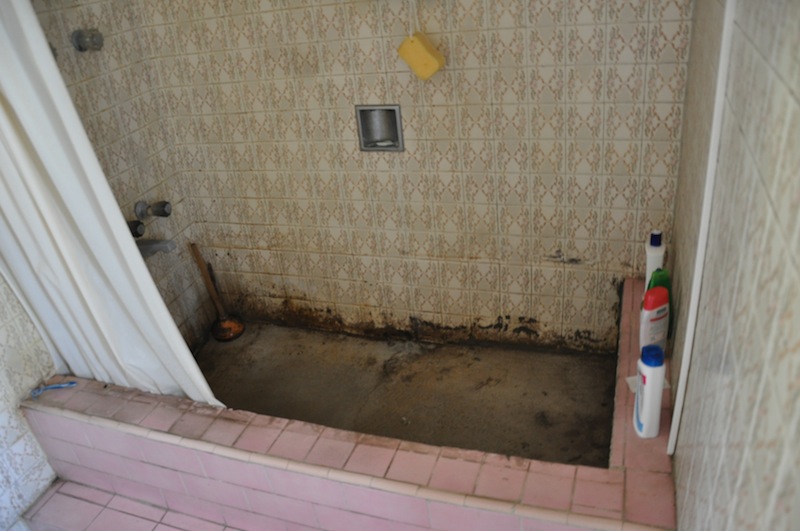 I think it’s absolutely great that someone has created a platform that allows individuals to rent out spare rooms in their homes, to budget travelers like us, seeking to mingle with what I like calling “the real people of the real world”.

As much as I like knowing how people live and what their houses are like, sometimes this can go wrong… really wrong!

During our stay in Mexico City, we booked a room in a house that advertised itself as “very spacious, with privacy“. Yeah, call it spacious… I’d more accurately call it CREEPY!! Creepy @ USD23/night.

The house was supposedly close to the metro station, but upon arrival we took a cab as it was night and our first time over here. Surprise Nr1: nahhh, it wasn’t so close from the metro. Anyway, cabs are cheap so if that was to be the only problem, we could work around it, we thought!

When we arrived to the very dark house, a boy (let’s call him Jose for privacy issues, although he doesn’t deserve us giving a crap!) opened the door and said that, as we knew, the owner of the house wasn’t at home and he was there to welcome us and give us the key. He showed us our room and the bathroom. Or kind of! He opened the door of the bathroom, didn’t turn on the light and said “this is the bathroom!“.

We were to find out later

why he didn’t turn on the lights…

The room was indeed spacious. But not in a “oh-so-spacious and comfortable” way. More in a “oh-my-god! this is so big and creepy!” sense. Old furniture oddly placed across the room, bags with what could have been clothes or garbage or dead animals furnishing the corners, dusty piles of DVDs, stuff all around and a huge 52″ LCD TV. Go figure the contrast between the cracks on the walls, the worn out sofa, the curtains that couldn’t even be pulled open to the sides and this monstrous screen! Someone cares more about watching movies rather than vacuuming the carpet I’d say…

The room was OK-isssshhh. The problem was the dirt all around and the adjacent closed balcony that looked more like what could have been The Simpson’s Cat Lady storage room. 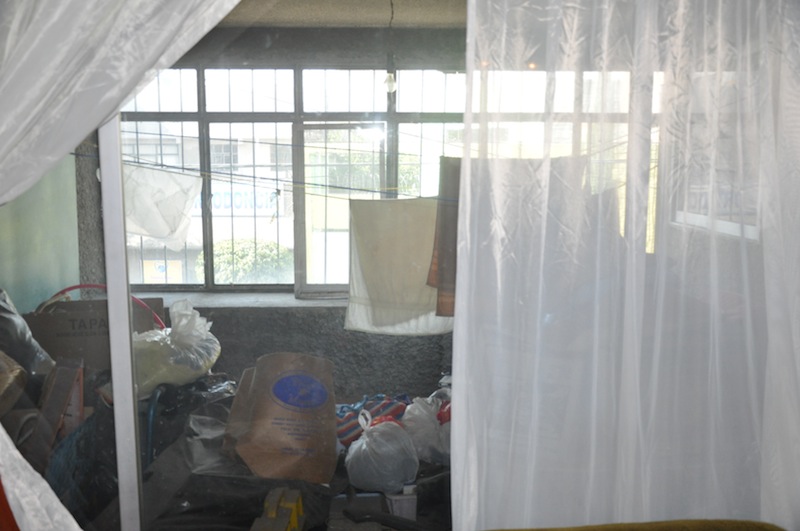 Welcome to the biggest indoor flea market of Mexico City!

One of the doors in the room lead to a bathroom that should have had a “Keep out! SERIOUSLY, KEEP OUT!” sign at the door. No words could ever describe this urine stinky cubicle, so here is a picture! If only images could capture smell!…

At this point, we decided the other bathroom was going to be our washing room for the next 4 days. No bath tube or proper shower area (just a moldy hole on floor to keep the water away), no toilet seat in a once-upon-a-time-white-now-yellowish pot, a paper basket way too full of not too greatly scented tissues and a mini chair that was, to say the least, creepy. Suddenly, showering doesn't feel like such a clean activity!

If I was to ever shoot a horror movie

I would rent this house for it!

For everything else, I’d pass…

As the upper floor wasn’t appealing (the room, the bathroom, the hall with photos of Jesus Christ placed next to fart medicine and sugary cereal…) we went down to make some dinner. At the stove we found a pot with beetroot covered in fungus. The purple of the vegetable with the greenish shade of the mold was as colorful as Mexico tends to be! Neither this or the greasy left-over sausage bites at the stove kept us out from scrambling some eggs. The eggs were good, the problem was the company during dinner… 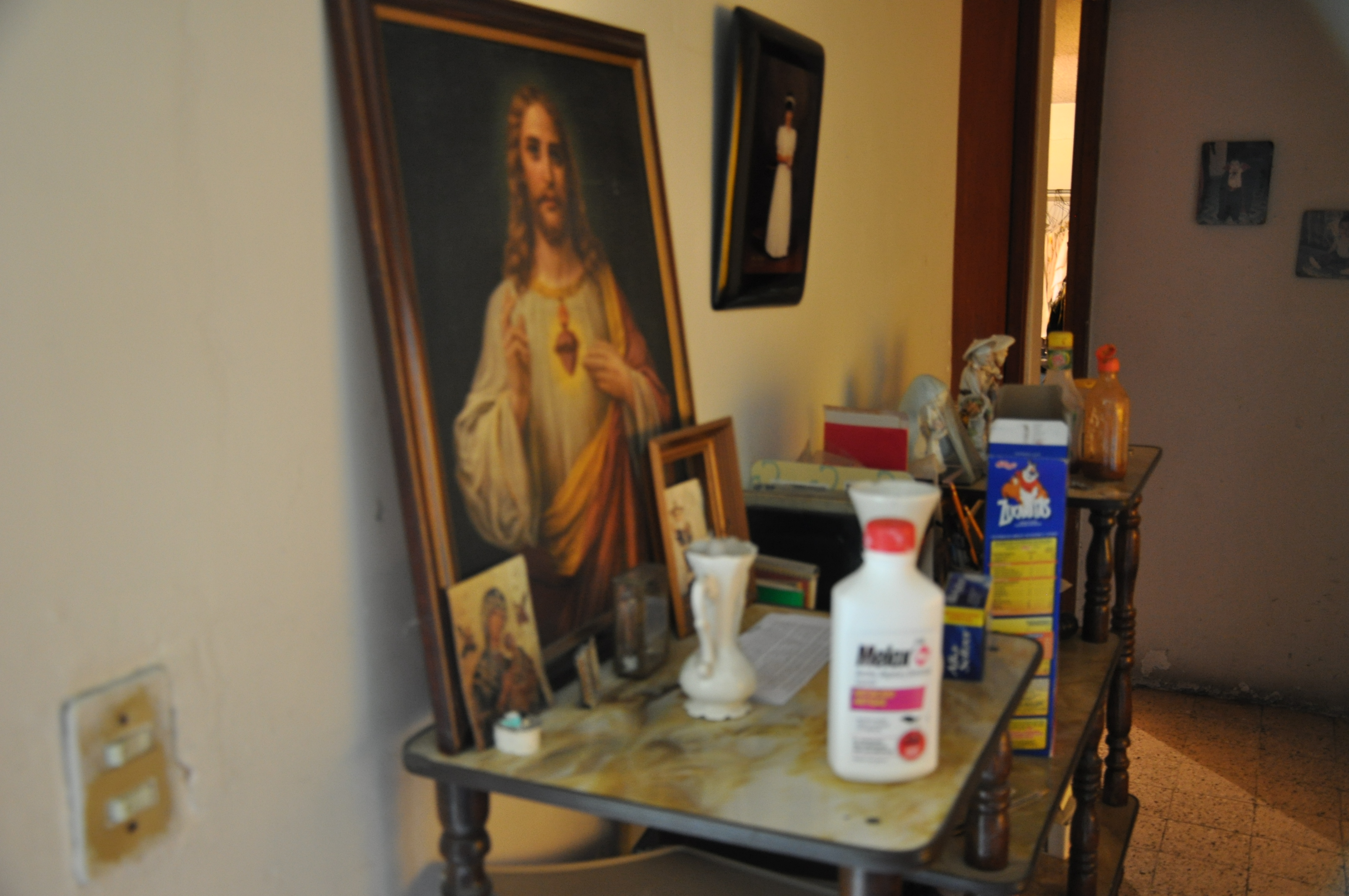 Jesus: how can you allow such thing?

Jose decided to join us at the table while eating left-over shrimp cocktail that was lying in the table – one wonders why not using the fridge to keep seafood safe if you have one, right?

Jose was from Cancun but was in town visiting his friend (who was actually away on holidays with his girlfriend). After 5 minutes of chit-chat and bitching about his friend’s girlfriend (who doesn’t let them do boys night out and cool stuff like that), Jose decided to tell us how a year back he was kidnapped for 47 days in the Mayan Riviera. “I’m only telling you this because you seem like nice guys!“.

Oh, how I wish we didn’t seem like nice guys…

So apparently this poor boy was kidnapped and tortured during 47 days, until his rich family (his uncle is the Mayor of Cancun) paid 2million pesos for him. He was kept on his knees with his wrists tied together during the entire time. He was allowed one meal every 2 days and a shower every 3. The remaining time he was peeing and pooing on himself and beaten up with the kidnappers guns if he dared to open his mouth. Random fact: the night before we was released out in the woods to meet his family, he was fed a very good burger. “With french fries and all!”

Imagine you are in this creepy place, don’t know this guy from nowhere and he is telling you all of this?

I was freaking out on the inside!

I decided to make some hot chocolate… Jose said it tasted just like his Grandma’s. Creepy. Again!

We slept. Wished on the inside Jose wouldn’t do anything strange to us during the odd hours of the night. We thought everything would be different during the day light. It was, but the night came upon us again at the Addam’s Family home…

On the second night the vibes were even worse… The more we would look around the more we would find crap, crap and more crap laying all over the place. I can stand the crap. What I couldn’t stand was the rat I saw going under the bed. F*ck!!! I crawled on top of Ashray in half a second. He kept on saying it was my imagination (in part to calm me down and in part because he’d rather think there was no rat, I guess…) but there was indeed a 3rd creature in that room. If it wasn’t too late at night and we weren’t in an area with nothing around, we would have left right then.

Great timing for the lights to go off!..

Ashray had to go around the house and find the switch because Jose was good for nothing. While in the darkness in the room I kept on thinking “damn you rat! don’t you dare coming to bed with me! I will kill you, you motherf*cker!!“. He didn’t.

After the lights were on, I put on Boston Legal’s DVD on the huge screen and managed to fall asleep listening to the voices of Alan Shore and Deny Crane. Also browsed some photos of Sheldon Cooper on the iPad. He gives me a homey sense of calm. He is so cute! Ashray was coding… That seriously takes him “away”.

Anyway, we decided THIS WAS IT! The following morning we left. We packed our bags, took our chocolate from the kitchen and left.  Later on we found that Jose had been munching on our chocolate straight from the bar! His teeth marks were all over our sweet chocolaty souvenir from Oaxaca!

Can you believe this? 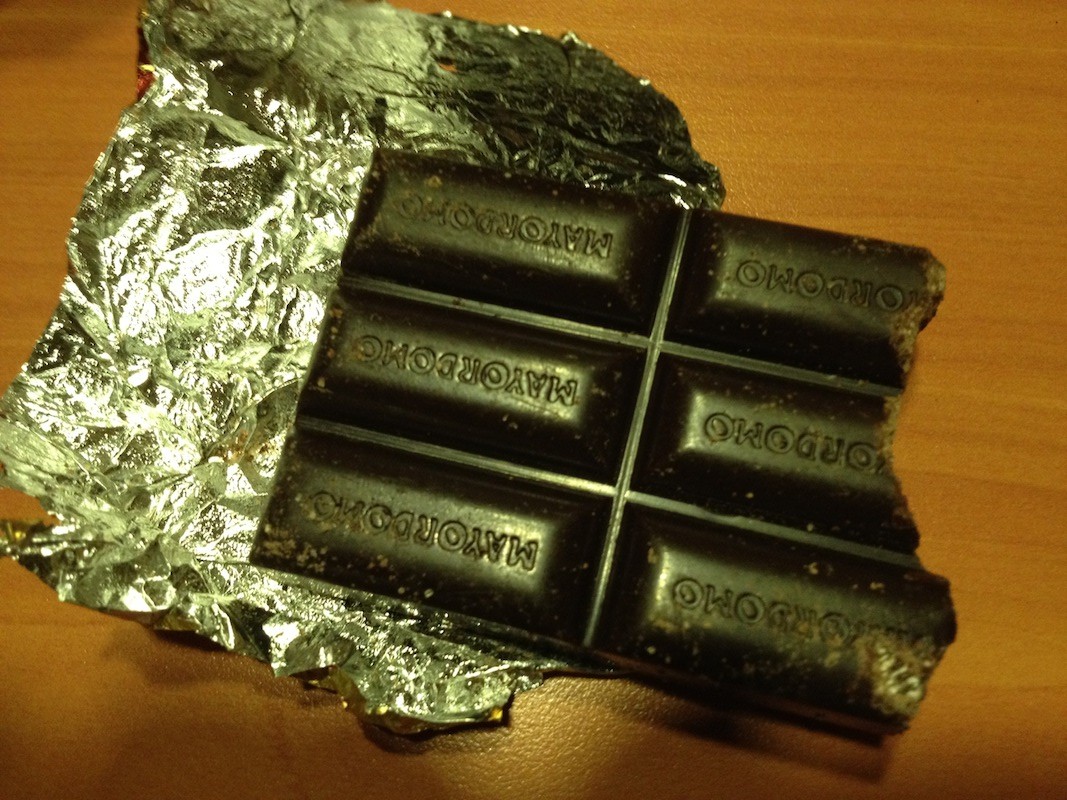 Spending the night in a dirty, spooky, moldy place… USD23
Cab ride to the metro that was supposed to be “walking distance”… USD2
Chocolate souvenir munched on by some strangers’ mouth… USD6
Getting inspired to write this blog post… priceless!
For everything else… there is Airbnb! ;)

But wait: there’s a happy ending!…

Truth is that we booked 4 nights for this place and after 2 we couldn’t stand it for one more second. We complained to Airbnb and they didn’t manage to get a refund from the host. Apparently, he was offended by our review! What nerve! Go clean your crib and then we’ll talk about what’s offensive and what’s not…

In any case, Airbnb refunded the amount out of their pocket (the 2 days we didn’t stay there), so that makes them a good reliable service to use (if there weren’t any assholes out there, then it would be safe 100% of the time… but nothing is ever perfect.).

So, if you use Airbnb, sign up here to get $25 in travel credit.

That way, we can also stay in nicer places next time and make up for the nights described above! Don’t you think we deserve it?!