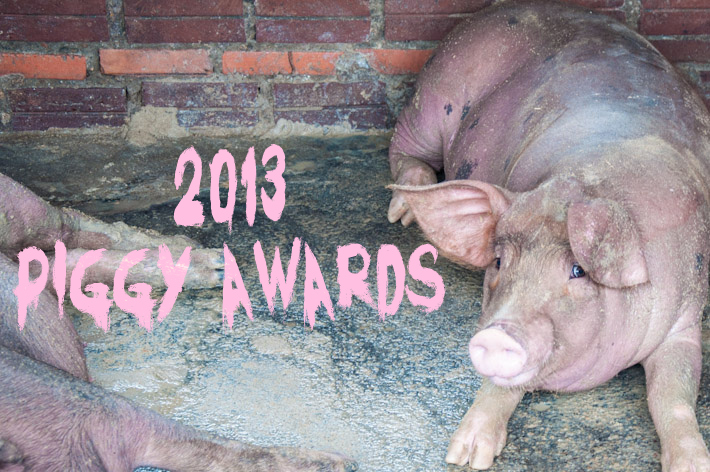 Every year, we celebrate the best and worst moments lived during our travels.

Last year, we published the 2012 Backpack ME Awards, raving about the best places we had the privilege to enjoy, and the 2012 Piggy Awards highlighting the opposite, that is, the low moments.

This year, we start with the negative side and the places, situations and people who notoriously didn’t contribute anything good to our travels. We save the best for last, for the sake of ending the year on a positive note and keeping it that way for many more months to come! I don't know about the whole of France, but Parisians sure think along these lines…

Bonjour Paris… we’re looking at you for this one!
All the steaming hot baguettes and deliciously sweet yet not too heavy Parisian pastries couldn’t make up for the lack of welcoming attitude in this city. Overloaded with travelers all year long and, particularly, during summer season when we happened to visit, those working in the tourist industry in Paris couldn’t give a damn!

We stayed at a hotel and the morning we were supposed to check out, we called reception and asked for a late check out. For an extra hour inside the room they wanted to charge us about 20% more than the actual room rate we were paying for the past few days. A polite way of saying: “fuck off, bloody tourists!”

Paris: your sights are beautiful but they would look even better with a smile!

Thankfully, not everyone had straight faces in France – read more about our France travels here.

Vietnam, as much as we loved spending time around your bustling cities and dreamy countryside, we have to say it out loud: you do have a tendency for taking advantage of tourists!

I have read that Vietnamese see white people (and tourists in general) as easy targets from whom to extract some money. There are theories (that do make quite a lot of sense) that explain how this country, being so oppressed by the West in the past (USA and France in particular) now want to make something back from Westerners. I can understand how this make sense, but it results in an unpleasant atmosphere for travelers, who always have to check and double-check when they pay for everyday things.

It annoys me that some tourists don’t mind being over-charged because they say “it’s still cheap even if this is not the actual price locals pay”. Personally, I’m unable to feel fully satisfied when I am paying different rates than the actual prices. Not because of the money in itself, but because of the principle and the disrespect that this represents.

Get your sh*t together award This awards goes out to New Delhi, its inhabitants, business people and politicians for not acknowledging that they are killing themselves and the environment they live in. Particularly during Diwali celebrations, but not only during that occasion, the city has been covered in a grey cloud of thick filthy smog. Some call it “fog”, some others think it’s a natural effect of the winter. The ex Chief Minister of Delhi even once stated that this is “a sign that the city is developing”. From what I understand, “developed” people are doomed to die faster.

Ashray has written extensively about the pollution problems in New Delhi and health issues associated with them: this is well worth a read. Backpackers who wear no t-shirt around religious places and town centers of conservative towns look and act like such idiots! So this award goes to all the travelers who disregard local norms and customs (when it comes to clothing and others), and do whatever they think makes them look cool.

Our friend The Angry Backpacker has dedicated an entire article to this type of behavior of silly backpackers around the world.

Worst meal of the year I had never tried Taco Bell before. I had seen outlets multiple times in mall food courts but I never found the food appealing. But on a given cold late night in Flagstaff, traveling back from a day spent at the Grand Canyon, we found that nothing else was open for dinner. We saw a Taco Bell drive-thru and I thought I’d choose a vegetarian meal, as chances are it’d be more edible than a meaty one. Boy was I wrong! That ridiculously heavy, rice loaded, cheap cheese stuffed bean burrito was one of the most disgusting things I have eaten this year. I remember feeling the burrito inside my tummy for more hours than what would have been normal. I bet there must have been Mexicans working in that Taco Bell. To them, mis mas sentidas condolencias.

We hate you award Next time I am bringing him along!..

We got married earlier this year. Initially we tried to do it in New Delhi and failed miserably. While that was a frustrating story in itself, what was later to come was even worse… When we eventually managed to make our marriage official in Las Vegas, the Indian authorities in the USA denied processing my visa to return to India because “What do you think?! You can’t just get married in Vegas and now decide you feel like going to India!“. WTF! As a tourist I was welcome to India anytime, but as the spouse of an Indian citizen, I was suddenly an undesirable…

So this year’s We Hate You Award goes to the Indian visa service crew in San Francisco – read more about this bitter unhelpful bunch on Ashray’s Harrowing Journey with Zara’s India Visa article.

For every low moment in our travels, we have a 1000 good experiences to make up for any bitter after-taste. That’s why you should also check out the highlights of the 2013 Backpack ME Awards!