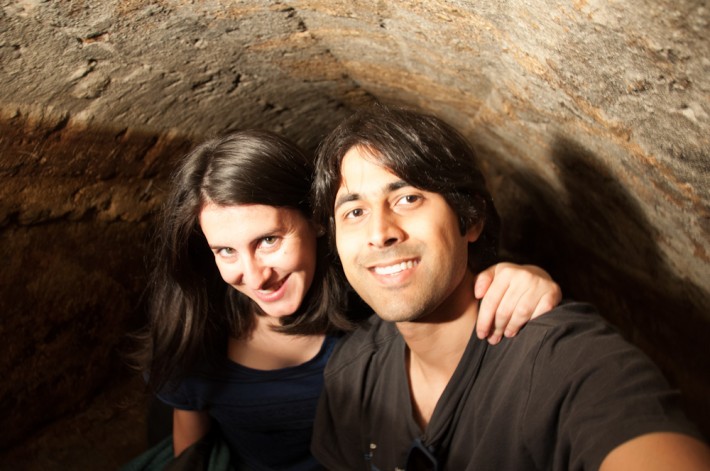 Underground Lisbon: A Visit to the Roman Galleries

There are many cool things you can do in and around Lisbon all year long. But going underground, as in literally underground, only happens twice a year!

Chances are you do not know this but, under everything that is pretty and meets the eye in Lisbon, lies another world. This is a world of interconnected corridors that the Romans built back in the 1st century AD, and that is now known as the Roman Galleries of Lisbon.

Back in 1755, Lisbon suffered one of the deadliest earthquakes in history! This video does a very good job at explaining what, all of sudden, took over the Portuguese capital, as the residents were going about their daily lives unknowingly (if you’ve played Assassins Creed Rogue, these scenes will ring a bell).

Everything we see in downtown Lisbon now-a-days are constructions that were erected after the Great Lisbon Earthquake. Between the earth shaking, the fire spreading and the force of the water, nothing resisted in Baixa-Chiado. Only the neighborhoods that are perched on the top of hills, like the famous Alfama, were spared.

When the reconstruction of central Lisbon started after the earthquake, builders came across a series of corridors underground. As these had such distinct Roman aesthetics, the people of Lisbon were quick to think that these were Roman baths, just like those already known in another part of the city. But things didn’t really add up! Baths require square structures to contain the water at different temperatures, and these were nothing but corridors, all interconnected. Later research showed that these were not structures for leisure, but instead they were what are known as cryptoporticus. 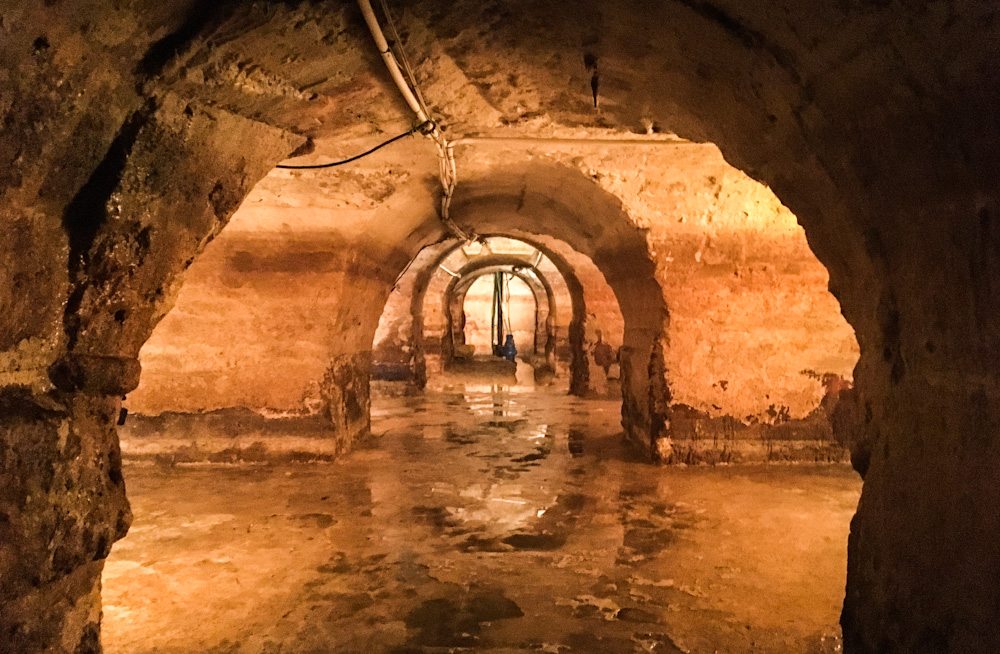 The Roman cryptoporticus in downtown Lisbon

What is a Cryptoporticus?!

As downtown Lisbon is right by the water, the soil is sandy and fragile. The opposite of what you need to be able to build upon. In order to level up the floor and make it strong enough to support constructions and public structures, the Romans built these series of corridors that, having arched ceilings, are meant to sustain the floor above them. Think something along the lines of stilts, but way prettier.

At around the same time as the birth of Jesus Christ, the Roman Empire was finally living a period of peace. In a way, all the conquering and expanding that could have been done, had already been done! This was the time for developing the Empire further, and concentrating on building new structures. This spirit only reached Portugal, that patch of land in the corner of the continent, about a century later. But as far back as the 1st century AD, Portugal was already rocking at one of the things we know how to do best: salting fish! Maybe it wasn’t the popular codfish back then, but we were already making sure the entire Roman Empire would enjoy the best catches from the Atlantic sea, any time, any day. Lisbon was one of the most important trade ports for the Empire. As such, the areas around what is now known as Praça do Comércio in Lisbon, housed not only fish markets, but also small ship repairing operations. The marshy soils of Lisbon couldn’t take the weight of such activities, though. While prominent Romans lived up the hill, in the areas around São Jorge’s Castle, they knew that business had to happen down there, by the water. With this in mind, they came up with the underground galleries that allowed them to start developing what later became the busiest area in the city. 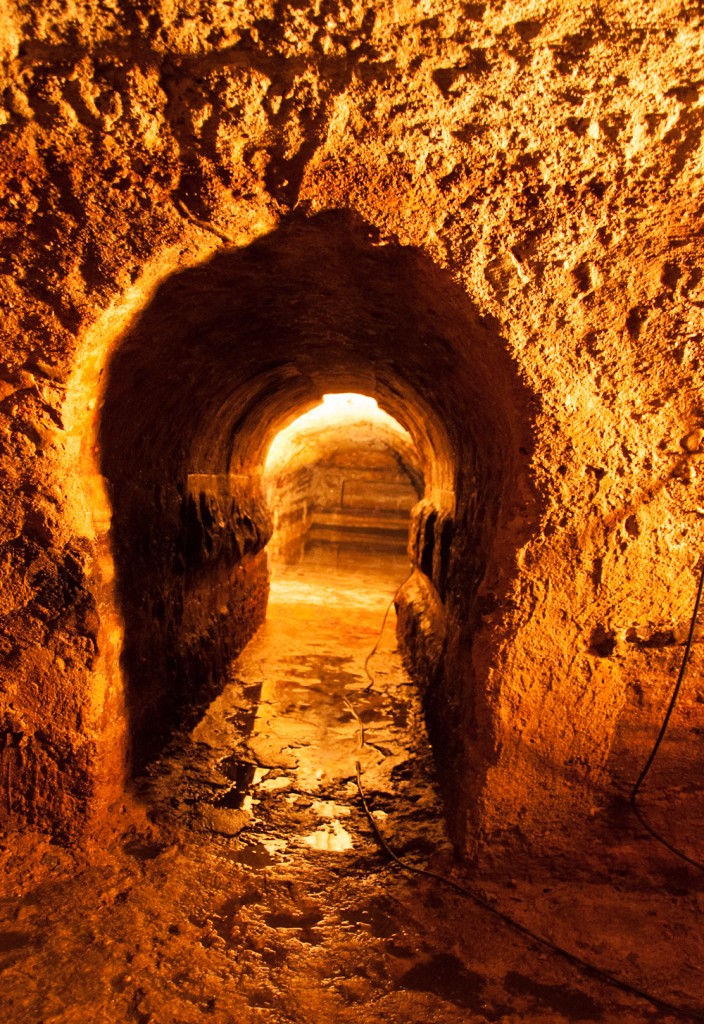 Let’s fast forward many, many centuries… Around the 18th century, these Roman galleries were being used as water reservoirs. Even though they were not built for this purpose, the fact that there were several springs flowing down Lisbon and towards the Tagus river, made them constantly fill up with water. Score! Lisbon could use the water collected for different purposes, including drinking. As the city became more modern and a sewage system was installed, the golden era of these galleries abruptly came to an end. The inhabitants of downtown Lisbon were getting sick in large numbers, raising suspicion that something was off. Turns out that the underground sewage system was contaminating the water accumulated in the galleries, and thus spreading fatal diseases. The Municipality prohibited the use of the galleries for water storage and, from that moment onward, life moved forward above ground. 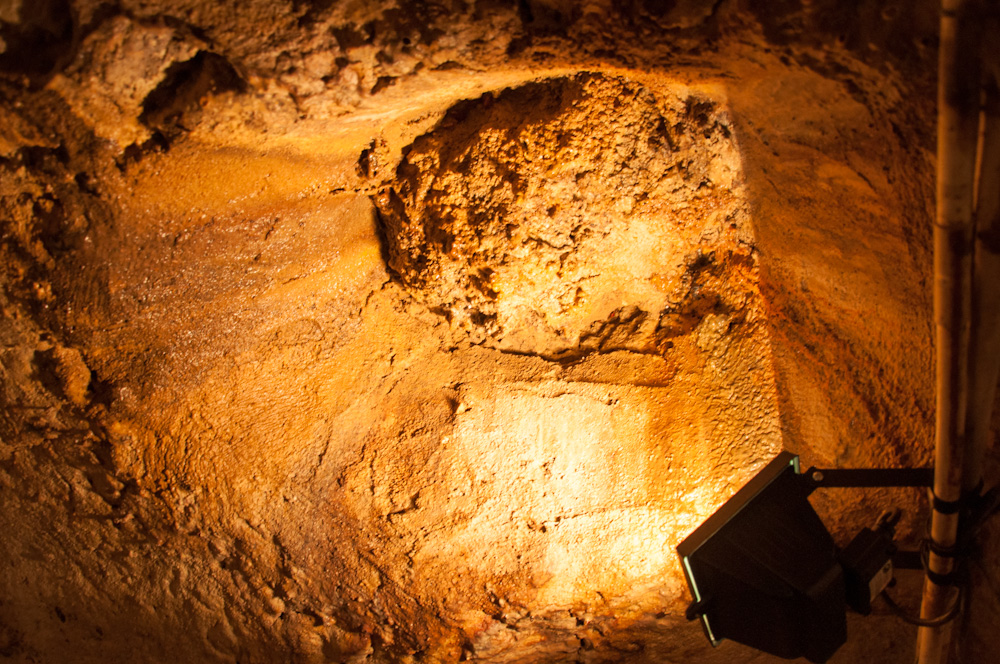 Visit the Roman Galleries of Lisbon:
A twice a year opportunity!

Now-a-days, the Roman galleries still get flooded. Even though the springs that used to feed them are no longer there for us to see, the amount of water flowing underground is still very significant. This is the reason why the galleries are not normally open for visits. Twice a year, the Municipality of Lisbon and the Museo de Lisboa drain these corridors, install proper lighting, and conduct guided tours for those who’d like to feel like the Ninja Turtles (minus the pizza) for a day. 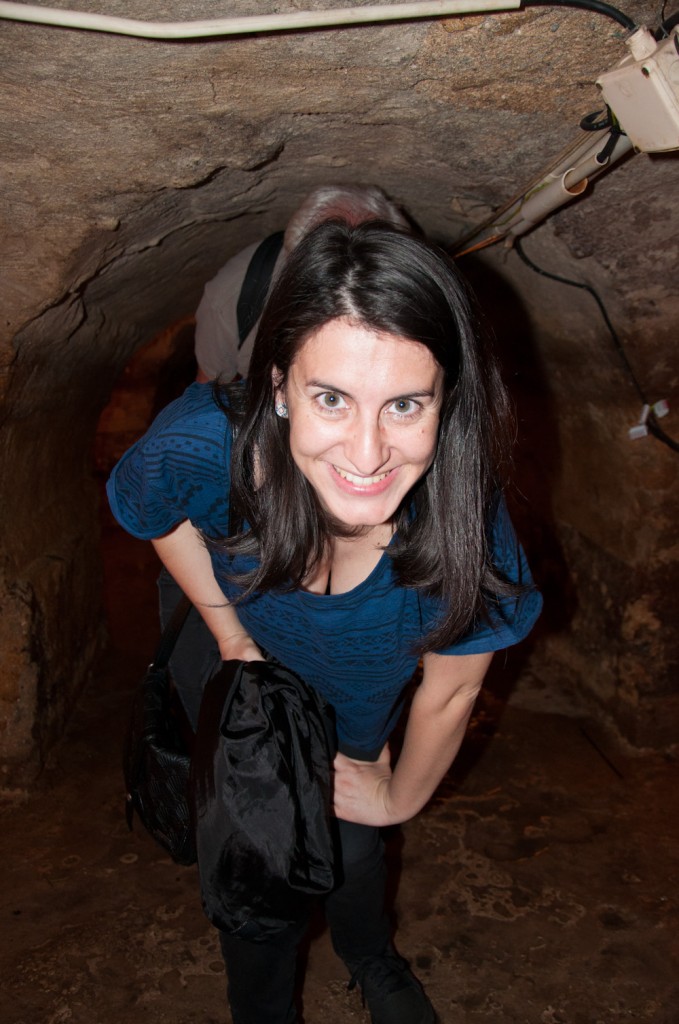 Exploring the Roman Galleries of Lisbon – in some parts, you need to make yourself smaller in order to go through

In years gone by, you’d have to queue until your turn arrived to go underground, through a manhole in the middle of the street in Baixa. This sight and the opportunity to go down there is so hyped up that folks would line up for hours and hours, sometimes without luck! Things seem to be more structured now, and you can actually book your tickets online in advance. Even though there is no announcement yet of the next date for when the Galleries will be open, it is usually once in Spring, and once in Autumn, around September. This is the space to watch for those much coveted tickets. 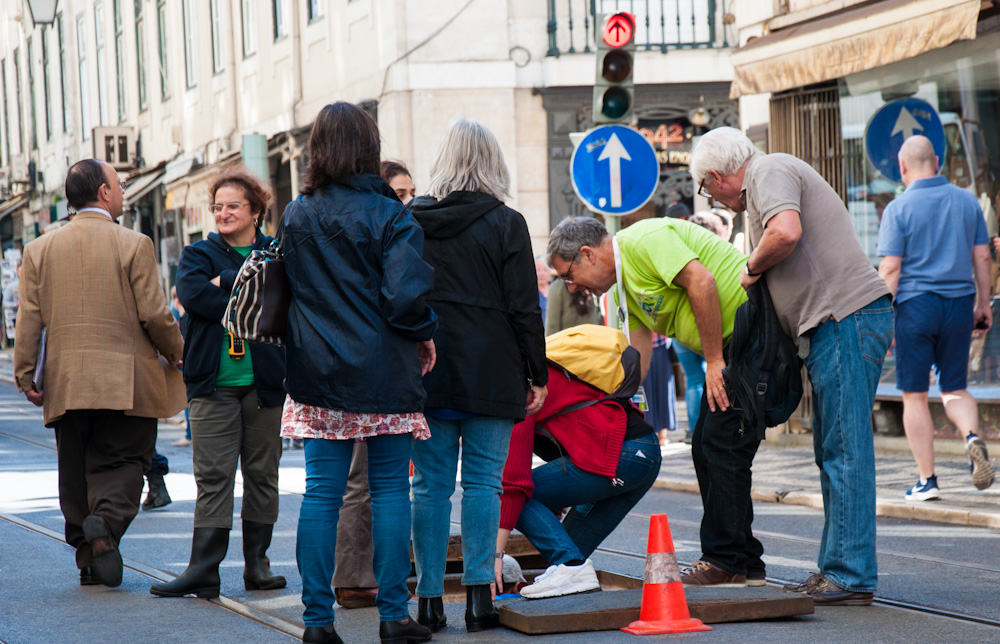 Entrance to the Roman Galleries of Lisbon, near Rua da Prata 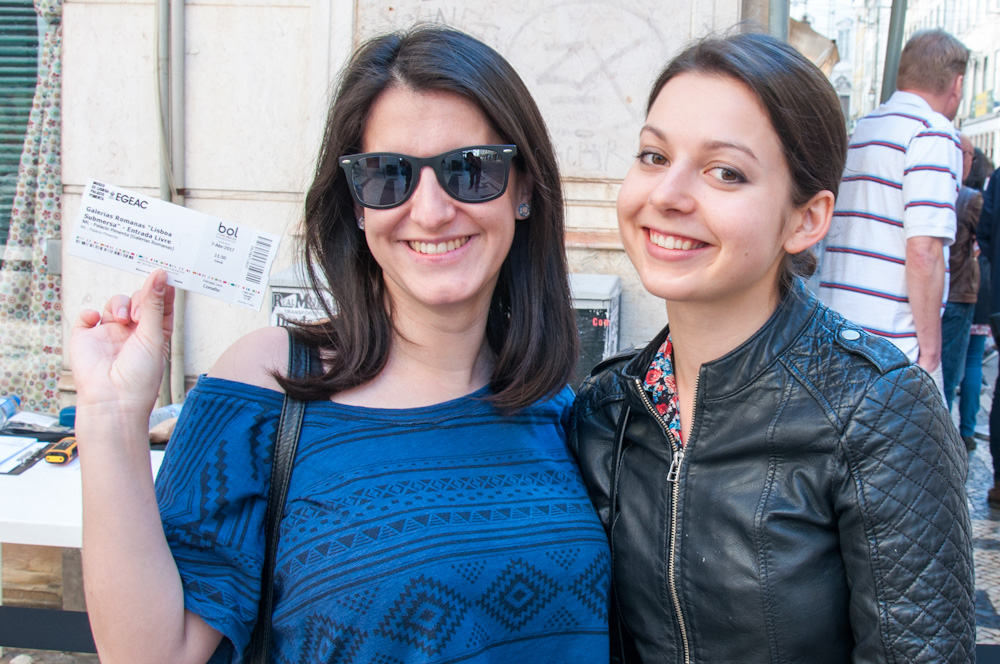 We scored the much coveted tickets!

For now, the guided tours happen in Portuguese only, but even if you do not know the language, this is an interesting opportunity to discover a different side of Lisbon. The visits are free, and they last a little less than half an hour. At least down there, there are no large groups of tourists, or tuk tuks.

Jokes aside, it feels truly impressive to understand that everything we see in downtown Lisbon these days, is standing on top of these cryptoporticus, with stones that were put together 2000 years ago! I know that the next time I eat salted fish around Praça do Comércio, I’ll be thinking of this…