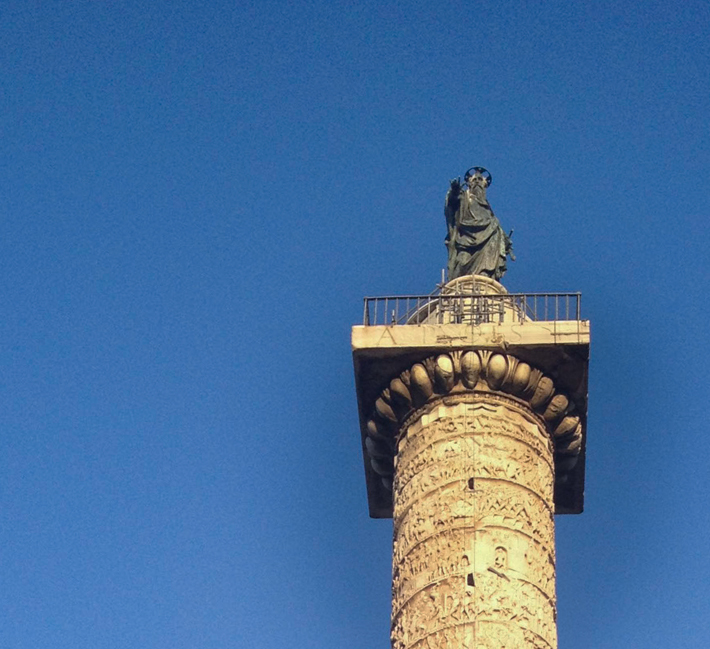 MARCUS AURELIUS – A man worth knowing about

Wandering around Rome is like walking around in an open air museum. The city is filled with historical significance. In fact, it’s quite possible that even historians feel inadequate in this city! We visited Rome in November, a time that is supposed to be relatively calm and devoid of tourists. However, there isn’t really such a time in cities like Rome and Paris. The Spanish Steps and Colosseum were full of people. The lines weren’t as crazy as summer but the tourists certainly were!

It is not death that a man should fear, but he should fear never beginning to live.

Then there was Marcus Aurelius. Standing on a column high up in the sky, with nobody looking up at him. Somehow Piazza Colonna is given a miss by a lot of tourists. But Marcus Aurelius was no ordinary emperor.

You are a little soul carrying about a corpse, as Epictetus used to say.

He was considered one of the five good emperors of Rome. I wanted to know more about him ever since I read A Guide to the Good Life: The Ancient Art of Stoic Joy. The book talks about stoicism but also highlights Marcus Aurelius as one of the most important figures in the development of stoic philosophy.

When you arise in the morning, think of what a precious privilege it is to be alive – to breathe, to think, to enjoy, to love.

During his reign as emperor of the roman empire, he wrote Meditations. His book is highly regarded as one of the prime texts on the philosophy of stoicism and it was written from his experience as warrior and administrator of an empire. It outlines a philosophy of commitment to virtue above pleasure, and tranquility above happiness.

So if you go to Rome, do not miss out on seeing some truly amazing things about Marcus Aurelius. One of the surviving manuscripts of Meditations has been kept in the Vatican library since 1300AD. Meditations was written almost 2000 years ago. The principles in it are valid even today!

The happiness of your life depends upon the quality of your thoughts.