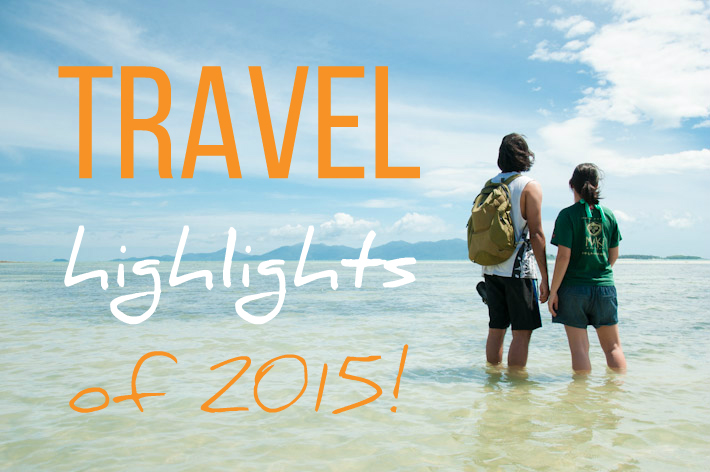 Ever since we started traveling full-time I don’t have the same feeling I used to have before:

What?! It’s already December? The year went by FLYING!…”

Now, I fly! Being in various places and occupying your time with different activities, time dilation becomes your best friend.

Still, it somehow always feels like you could have done more. Personally, I didn’t learn as much Hindi as I planned I would. I didn’t write on Backpack ME as much as I would have wanted to. I didn’t edit all those hours of footage I have been accumulating, into nice little videos to share on our Youtube channel. I also didn’t keep in touch with people in the distance as much as I should have… well, the list goes on!

2015 was far from uneventful though. So, as an end of the year recap, let me share with you some of the greatest travel moments of the year. As always, reading what we publish here on Backpack ME, I hope you feel informed, entertained and ultimately inspired to embark on some travels of your own!

a road trip in Patagonia!

We started the year with a way too ambitious trip. We rented a van for almost 2 months and made the road our home. Starting in Santiago de Chile, we crossed over to the very pleasant city of Mendoza in Argentina. We eventually reached the Southern part of Chile, Punta Arenas. Many KMs, adventures, stunning landscapes and Asian food cravings later, we reached the conclusion that Chile is the most naturally beautiful country in the world. It’s also one of the countries we’ve explored the most. As for Argentina, our visit was fairly brief, so we know we must go back for Buenos Aires and more! In Argentina, in front of Perito Moreno Glacier

If you have an Indian passport and plan on doing a similar trip, keep this info in mind:

Feeling at Home in Lisbon

Lisbon is one of the cities we like spending time at every now and then. This time, we had our own place for a couple of months. After roughing it out in Patagonia, it felt really nice to enjoy the little pleasures of life in a more or less static way. We spent time with family and friends; we discovered the best grilled chicken joint in Lisbon; we learnt how to bake our own Portuguese custard tarts and Ashray surprised me with the birthday trip of a life-time!… "The best way to travel is to feel", mural in Lisbon

Planning a trip to Lisbon? Read on:

Low-cost Tips for Traveling in Lisbon

Miley Cyrus sings “It’s a party in the USA” but, for me, it was an epication! Yes, this is a term we coined last June during my birthday. Epic + Vacation = EPICATION! Our epication took us to Cleveland to enjoy one of my favorite bands, Dashboard Confessional, live (extra YAY for the meet-and-greet!). We then flew to Denver chasing the music, this time to see The Mowgli’s and Portugal. The Man in concert, at the stunning Red Rocks Amphitheater. Portugal. The Man was one of the best live shows I’ve ever been to. Our epication of 10 days ended in New York, where we rented an Airbnb in Brooklyn, roamed around soaking in the vibes of the city, enjoyed our neighborhood Jamaican bakery and felt pretty damn good about life. Exploring the Nature around Denver, Colorado

We’ve shared a photo album of our Epication on Facebook… check it out!

We always come to India at least a couple of times a year. This time, during the month of July, it was one of the best stays we’ve had in Delhi. The usual sickening smog was dispersed by the rains and the spirits were light and playful! In Delhi: a selfie under the rain

Thailand is always a good idea!

Ask me “do you want to go to Bangkok?” any day and my answer will always be “YES!” This is one of my favorite cities in the world and, once again, we used it as a place to “unwind” after India. I know many people find Bangkok hectic but, when you depart from Delhi, Bangkok feels so clean, smiley and welcoming! After eating our way around Bangkok on a Thailand Food Tour, we did a short trip to Koh Samui where we made friends with the owner of our hotel. Together, we visited local spots we wouldn’t have ended up at, and tried to capture the beauty of the island in our photos. It's BBQ time in Koh Samui!

See more about this trip to Thailand:

Eating Around Bangkok With Taste of Thailand Food Tours

Eating Durian For the First Time in Thailand [YUCK!]

TAIWAN… It’s So Nice to Meet You!

Thailand was actually a stop-over en route to Taiwan. Oh Taipei… what a glorious place! I loved the feeling of being in a city where I couldn’t read the signs, where I couldn’t understand what people were saying most of the time. Everything was different! The sense of aesthetics, the food (long live bubble tea!), the ways… It may sound silly but, in Taiwan, surrounded by novelty, I really felt like I was traveling! A night out in Taipei.. with good company and Xiao Long Bao for the win

Istanbul: An apartment by Istiklal Street

At some point this year we felt like being in a familiar place, and staying there for a while. The rhythm at which we often travel does sometimes cause a little travel burn-out. And that’s why, during 2016, we’ve decided to take it easier, to spend more time in each given destination. Not only to soak it all in better, but also for the sake of our mental sanity and physical well-being. Keeping up with good habits can be hard when you’re always changing venue.

Anyway, the chosen place where we’d “keep discovering, feel excited, yet feel at home” last September was Istanbul. Once again, we logged onto Airbnb, rented an apartment and, for 30 days, we decided to be Turkish.

Istanbul was living a pretty intense social and political moment while we were there. Living by Istiklal Street, the main walking city in the immense Turkish capital, we often saw demonstrations. Turkish pride felt like it was on the rise, while the number of Syrian people roaming the streets begging was alarming. We did our bit and helped out a few folks. We also had some broken English conversations with some of them and hoped for Europe to stop being so whiny about the influx of refugees. After all, most people displaced because of ISIS’ actions are in Jordan and Turkey right now. Comparatively, Europe has nothing to complain about. Sunday afternoon by the Bosphorus

Between Europe and Asia, in Istanbul

Sometimes we travel for enlightenment and, some other times, simply for fun!

Birthday fun this year meant a day spent at Disney Paris, a weekend going up and down the rides of the ultra-fun Asterix Park, attending a Tintin exhibition, indulging in the world of French patisserie once again and, most of all, enjoying the company of our good friends! Still in birthday celebration mode, we flew from Paris to Berlin to visit another friend. We had a lot of Vietnamese food, went on a short road-trip to Poland, visited Berlin’s kick-ass Museum of Computer Games, photographed the warm colors of the Fall, discussed the wild parties at Berghain with great interest and went around town being silly, and commenting on things that are so Berlin. Examples? Poorly lit cafes, hipster versions of all sorts of things (including the hoods that were hipster but it came to a point that the hipster thing was not to be hipster so they became unhip for the sake of being hip again!), gentrification and housing prices, shortage of ATMs, abundance of punks with signs such as “Help a Punk get drunk!” and so on!… Ashray, Dushi and Link (not Zelda!) at the Computerspielemuseum

As a side note, if you want to enjoy a typical Portuguese meal in Berlin, head to A Telha. I went, I researched, I approve. Muito bom!

even better than expected!

The 2 weeks we spent in Italy were one of my personal highlights within the highlights of the year! Ashray found incredibly good flight tickets from Berlin to Rome. Even though I had my doubts as I thought the time wouldn’t do justice to the country, we decided to fly to Italy… and I am so glad we did! After tourist season, we roamed around Rome, where we also rented a car. Off we went to Napoli, the birthplace of pizza (yes, you can guess what we did there…). We drove the curves of the impressive Amalfi Coast, with almost no other cars around. And we finally reached Puglia, my favorite part of the trip, where we stayed in a dreamy farm/hotel where I got to learn how to make fresh pasta from scratch. A perfect plate of spaghetti with seafood, at the Amalfi Coast

15 days weren’t enough for Italy indeed.. but what an awesome preview of future trips this was!

We had been talking about visiting Jordan since we were living in Dubai. So, in a way, this trip was 5 years in the making.

I must admit that Jordan surprised me. Petra was as glorious as expected, we floated in the Dead Sea even more than what we did in the ultra saline waters of Laguna Cejar in Chile… but, the absolute highlight of 10 days around Jordan were the people. We have rarely encountered such hospitality! Jordanians are truly welcoming, always taking an interest in where you come from and your travel plans. On the first night in Amman, we headed out for a bite and, at a truly small kebab joint where only 2 tables could fit, we met a family. We talked about a little bit of everything: meats, work, life in Dubai, life in Jordan… until Grandma asked us “where are your babies?!” When you travel, it’s the little things like this that warm your heart. No matter how many stunning landscapes or incredible man-made creations you come across.. more often than not, it’s about the people. And Jordan excelled at that! Plan your trip to Jordan:

What are your travel highlights of 2015?