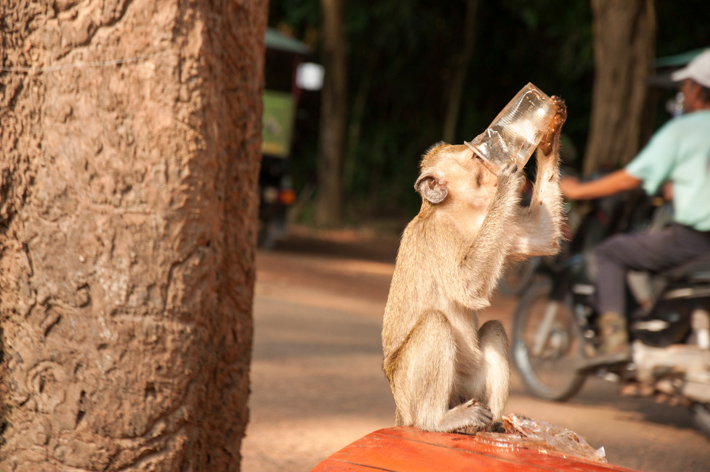 That hit the spot!

Just as we were entering the Bayon Temple in the Angkor Archaeological Park we found this little troublemaker digging in the trash can outside. He inspected a bunch of items which included waste paper, poly bags, coke cans, water bottles, etc. before he found a plastic glass with some liquid (beer?) inside. He took off the cap and with a big smile decided to gulp it all down! Finally, he was satiated!

Of course, he had strewn all the trash from the bin around the parking lot, so much for civic sense. In the meanwhile, his partner in crime was sitting on a bicycle and decided to swing out and fight with him over the empty beer glass. The cycle toppled over.

Finally, some Germans came out of the temple and they had their bikes parked right next to the one that had fallen down. They mounted their bikes and then looked at the monkeys and said “Sir, you want Tuk Tuk ?” and then rode away laughing while the monkeys snarled at them!

We just stood there and watched, it was all quite entertaining!