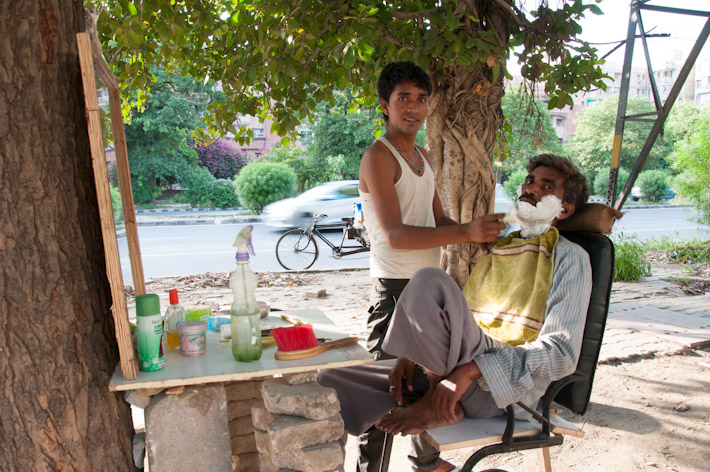 Some people think of San Francisco when they think of entrepreneurship.. I always think about the streets of India!

There are endless cases that prove that the old saying “necessity is the mother of invention” is absolutely true. More than invention, here in India, it’s about creativity.

Right outside the gate of the complex building where we’re staying right now in Delhi, there is a small barbershop. It’s just a chair (with a pretty creative add-on for head support!), an improvised table with shaving and hair cutting utensils, a mirror and, of course, the barber. But it is a fully running business and they get plenty of customers. A guy that wouldn’t probably have the means to open an actual shop gets to run his own business. While people who wouldn’t normally afford to visit such shops very often, get to do so at street prices. India is very often criticized because of the massive income gaps between different members of society. It is true that there are shocking contrasts and you easily get exposed to those by simply roaming around. But we should also praise the fact that, within the same areas, you get all sorts of products and services for all those different levels of income. For example, while I drink a cappuccino at a cafe for 80 rupees (USD 1.25) or more, I know I can also get a small cup of chai from a street vendor at 8 rupees (a little over 10 cents of USD).

It is this diversity and the little details it manifests itself in, that make India so captivating for visitors!