Mexico City: making a living in the metro

Mexico City is part city, part market. Anywhere you go, there will always be someone selling something! This is particularly noticeable in the metro.

One of the great things about the metro in Mexico’s capital is the symbols system they use to mark each station. Apart from naming each station, like any city in the world would do, Mexico City’s metro map sports symbols that make it easy to identify each station. This is a fantastic system not only if you are sitting far from the map and can’t read in the distance, but also if you can’t read at all or yet, in the case of kids. This way, any kid could say “Grandma lives by little ducky!“. Symbols ranging from famous personalities, nature related items, monuments and historical icons make it easier to navigate around the system.

The other remarkable thing about the metro is that every time you stop at a new station you can marvel at the sellers on the move who will entertain you, not only with the kind of products they sell but also with their marketing techniques. 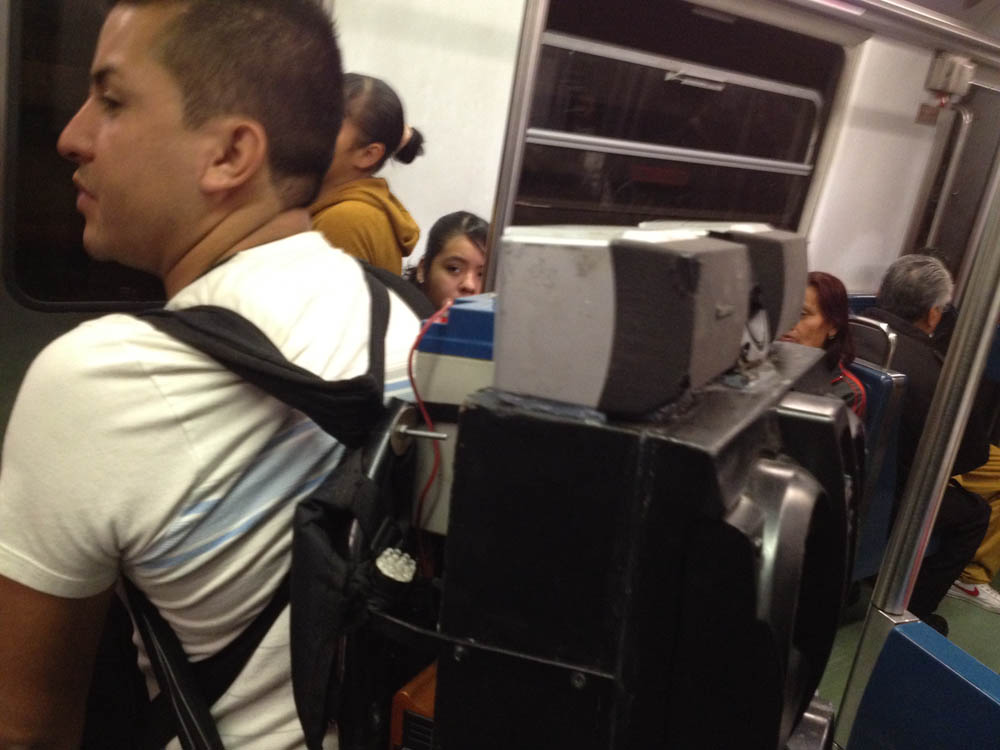 Record shop on the go!

What do you think one might need all of a sudden while riding the metro? Chewing gum, cough drops, cough balm, batteries, peanuts, city maps, CDs, DVDs, manuals that teach you how to assembly electrical systems (!) are some examples of stuff that, you never know, might come in handy!

People selling small items like chewing gum have clearly lost their voice. Lines like “2 packets of chewing gum for 10 pesos! New flavor! Mint to freshen up your mouth and soothe your throat! It’s 10 pesos, it only costs 10 pesos” are repeated in a singing tone until exhaustion during the long hours of the day and night.

On the other hand, those selling CDs are the Walmart of the metro! They carry a backpack with speakers that blast the songs they are selling, louder than most department stores would. For 10 pesos you can buy a CD with sometimes up to 500 mp3s! Tell me this isn’t great value for money?!

Riding the metro in Mexico City is the cheapest living theatre you can probably ever watch.

For only 3 pesos (equivalent to 0.25 USD) you are sure to be amazed at how people try to make a living, leaving all shyness outside in the platform of the station, before they enter their very own store on rails.