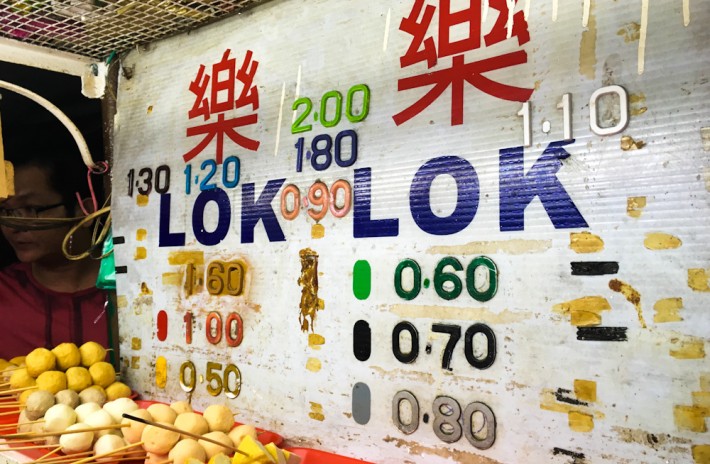 Lok Lok is not exclusively sold in the late hours of the night. But it is certainly after dark, following the closing hours of most other restaurants and street stalls, that this specialty of Penang shines bright!

Georgetown, the colorful capital of the Malaysian island of Penang, is well-known as a foodie destination. If you rent an apartment around the city, chances are you’ll have an individual electrical stove top for a kitchen. The cultural norm is to eat most meals outside the house, in one of the many food markets and street stalls that make the city smell appetizing all day long. It’s nearly impossible to walk around Georgetown and not feel hungry often. Food is everywhere, the prices are reasonable even for locals and, thanks fo the multicultural vibe of the place, choices are wide. Malaysian, Chinese and Indian are the prevalent cuisines to be found, but then you’ve also got the fusion of these, plus a vast array of international cuisines. Like I said, Penang is the shit for foodies! I truly mean it. Often times, when I’m hungry and in some random part of the world, I find myself fantasizing about this Malaysian island. In some of those fantasies, Lok Lok is the star.

If someone was to ask me “why do you like Lok Lok so much?” the answer would be pretty straightforward:

Lok Lok vendors prepare food on skewers, which the customer gets to pick and dip in a pot of boiling water for cooking. In Cantonese, the word lok (淥) means to scald in hot water, thus explaining the name of this street food. You can dip your skewer for as long as you want. If you like your meat well-done, you’ve got it. If you want your broccoli still crunchy, you’ve got it too. Lok Lok is delicious and very democratic too!

Once you’re done with the cooking process, you can make your food more appetizing by adding one (or all!) of the sauces available. The most common ones are peanut, chili, and sweet sauce. At the end of the day, the sauces will make all the difference because not all ingredients are marinated beforehand and because the dips, and not the food per se, will distinguish each vendor. 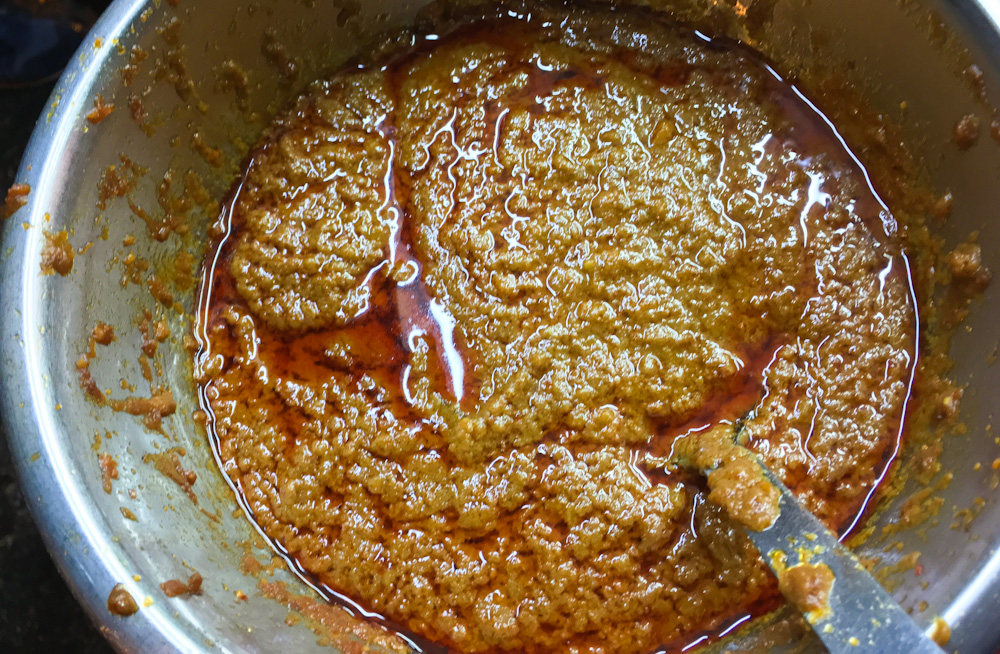 Virtually any food that won’t melt away in the common boiling water can make it to a Lok Lok skewer. One night, I counted 82 varieties. I repeat: eighty-two different foods! These included raw ingredients like shrimp, seafood, different kinds of mushrooms and other assorted veggies; processed bites like sausage, meatballs, fish balls; and even pre-cooked treats like beancurd sheets, eggs, and dumplings.

I had to take a panorama with my phone in order to capture all the goodness of that dreamy Lok Lok stall: 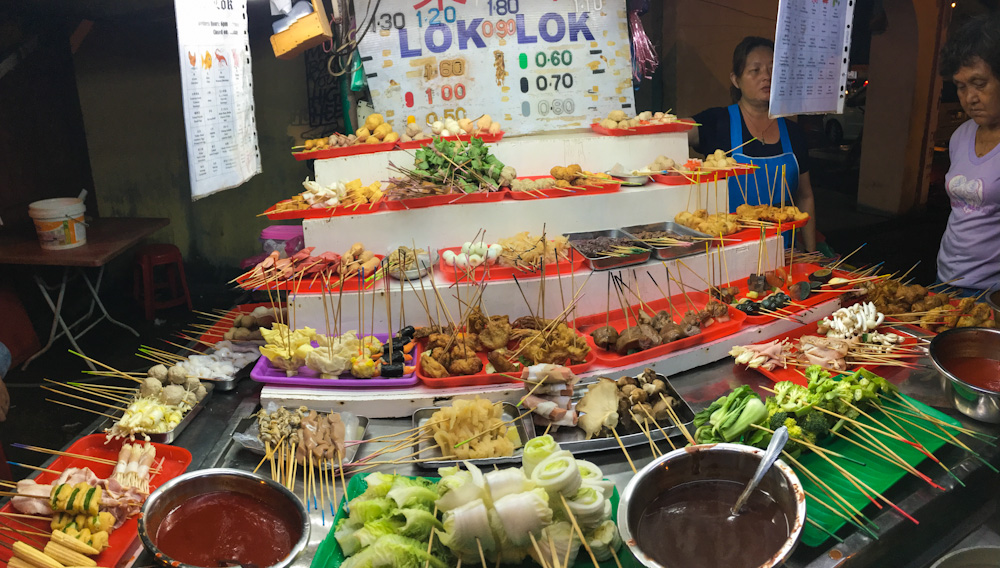 82 varieties of lok lok in Georgetown

Lok Lok sticks have different colors, to inform you of the price of each skewer. Each individual serving could go for something between the equivalent to 15 cents of a USD, to less than a dollar. 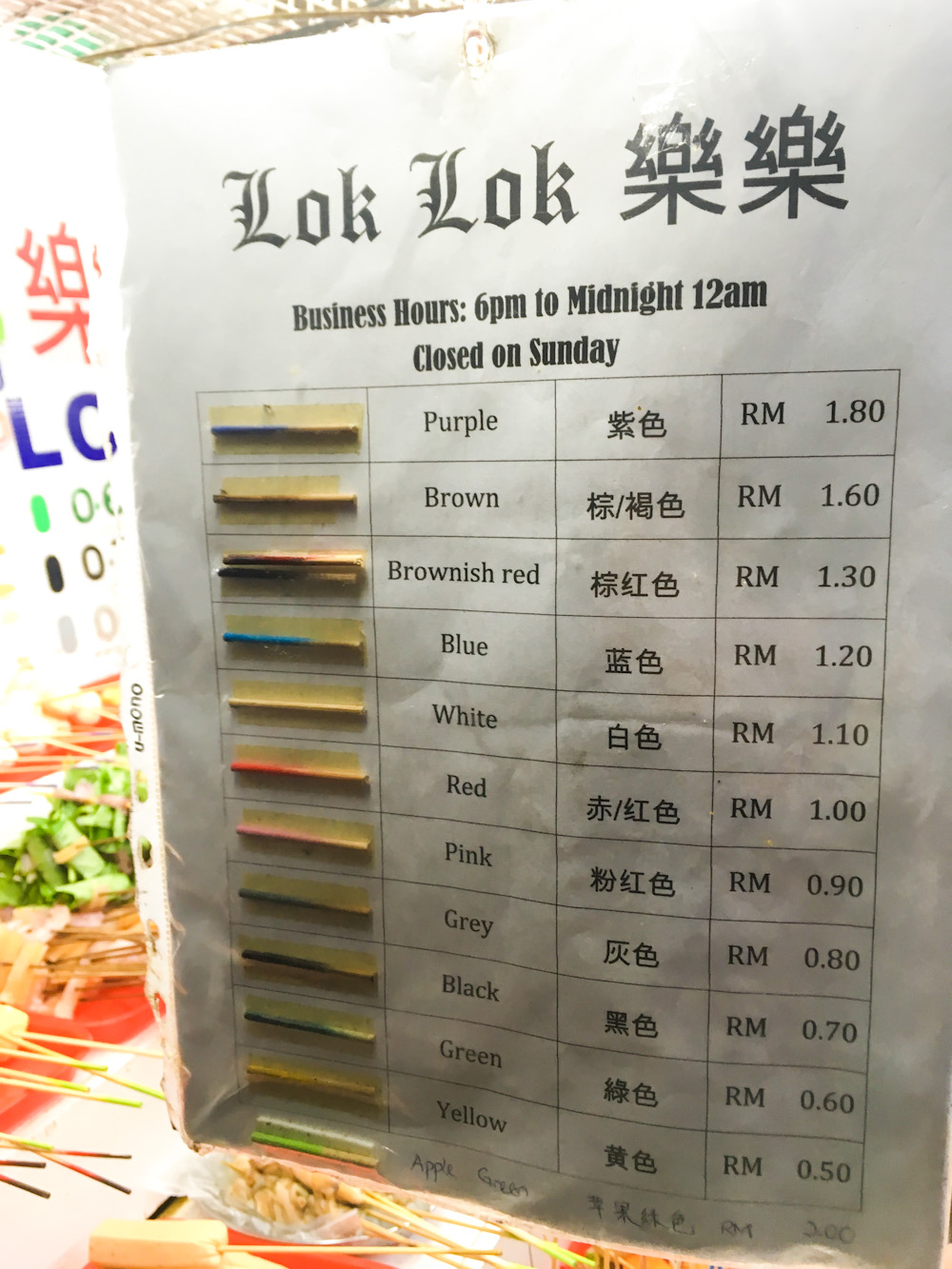 While Lok Lok may not qualify as a gastronomic delight in the sense that the preparations are simple and very DIY too, the food is good, as it can be as healthy (or not) as you want it to be. If you don’t know what to eat with friends, everyone gets to choose their own thing, and exactly the amount they are comfortable with. Because you keep eating and only pay in the end, it’s also a good way of not overordering and manage your appetite as you go. In that way, Lok Lok reminds me of street tacos in Mexico. There’s always room for one more… 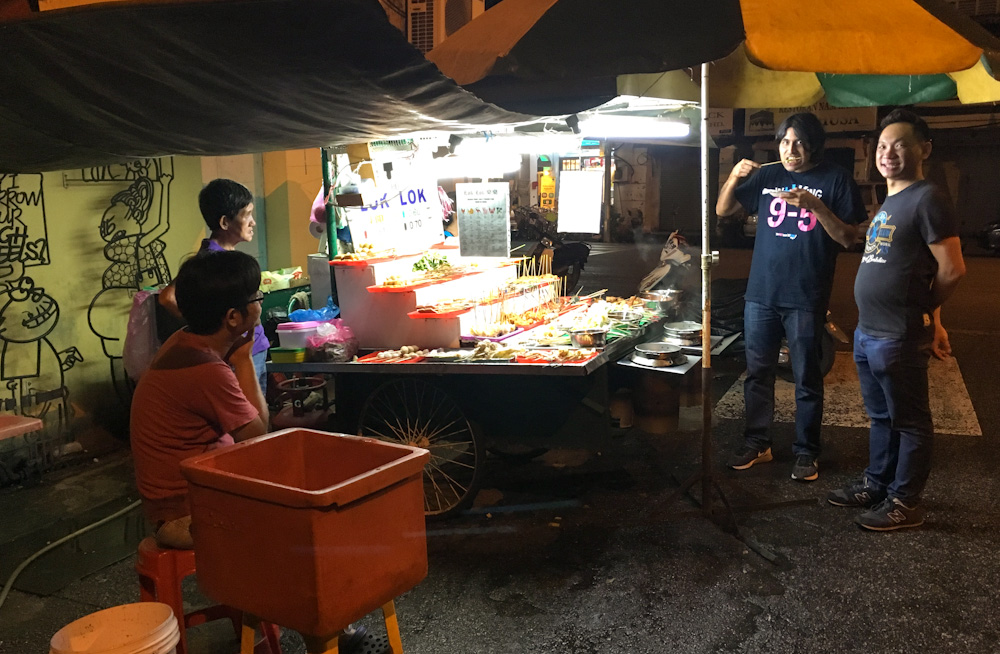 Ashray and our friend Vozzen lok loking away

Yet the best part of the whole Lok Lok experience is the social aspect of it. Folks gather around the street stalls selling this specialty and hang around for as long as they choose their food and eat it. Because you are sharing the same pot of boiling water, you invariably get to notice each other’s food choices and end up chatting. The shared boiling water that, as the night goes by, becomes a sort of stock from all the food elements that in it release their flavors, ends up being responsible for breaking the ice. Or, in this case, melting it.

Going for Lok Lok in Georgetown in the late night means grabbing a bite that hits the spot at an affordable price while enabling the chance to mingle with locals and fellow travelers. When a delicious treat is readily available and it brings with it a certain sense of community, that’s when you realize food is a world language. 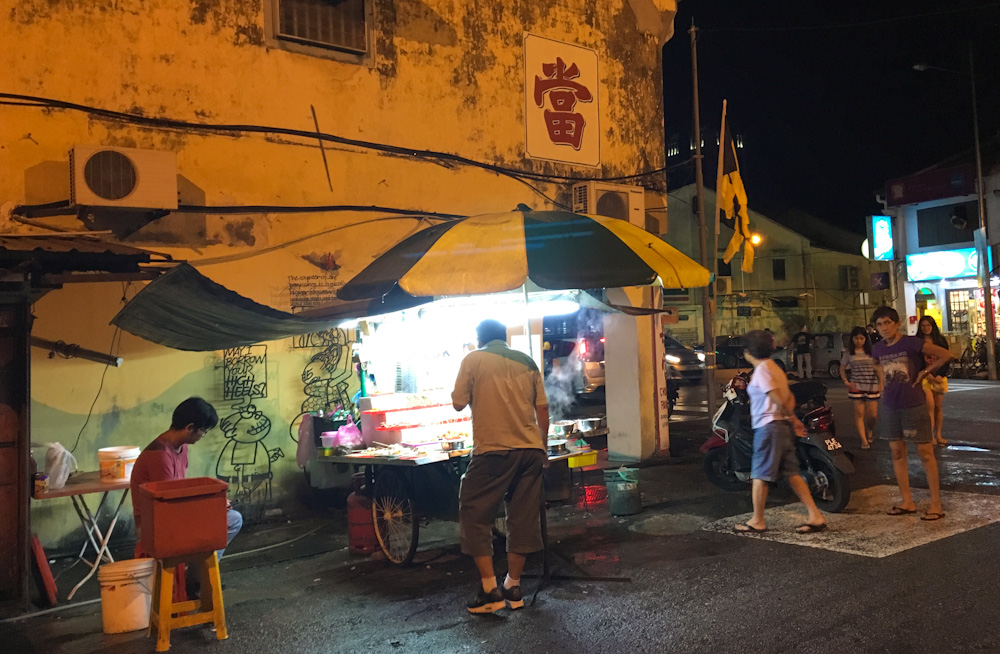 If visiting Malaysia can be great, making it to the island of the Penang can be extraordinary. Particularly for those who are into exploring new cultures via their food and eating habits, like yours truly. So book your Malaysia eVisa, packs your bags, and don’t bother eating the in-flight meal on the way there… you can hit a Lok Lok stand the moment you land!