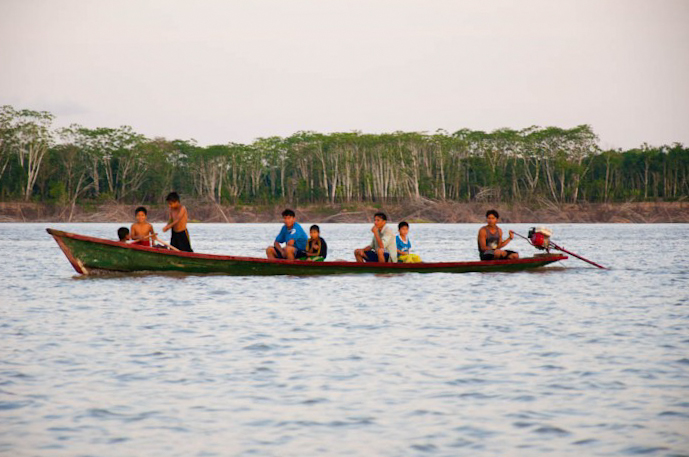 Into the Wild! Our Amazon Trip: Part 2/2

If our first day in the Amazon was exciting, the remaining time we enjoyed there wasn’t any less!

And this video is a proof of that:

Life in the Amazon starts at dawn: this applies whether you are a local or a visitor!

With a 6AM call time, Lobo had suggested us to start the day with some bird watching. I have to confess this is not my favorite nature related activity. I can’t relate to some people who make trips specifically to places with certain bird species and spend hours and hours observing them. But with an open mind, I woke up at dawn and jumped into our canoe to paddle up and down the Tapira river and let those flying early risers enchant me. 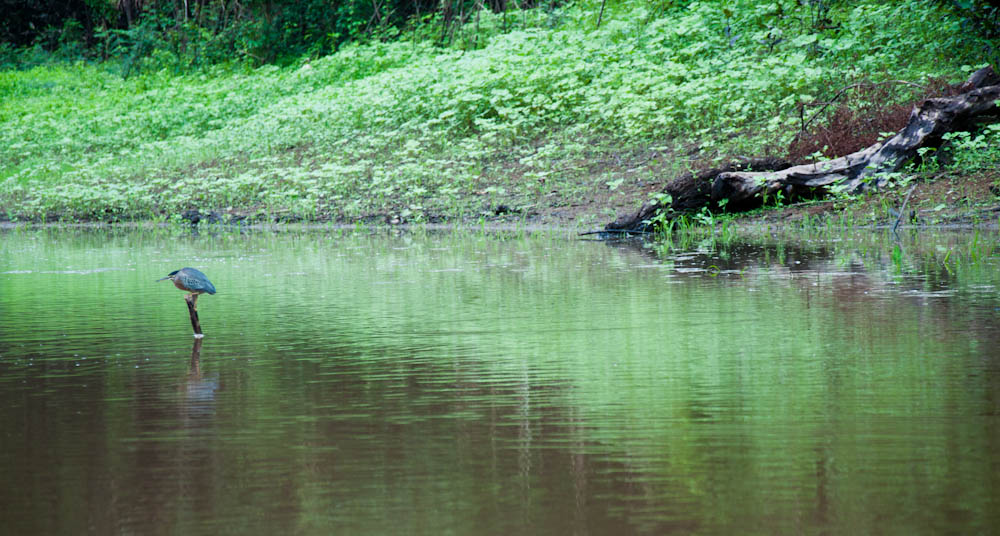 Bird watching in the Amazon 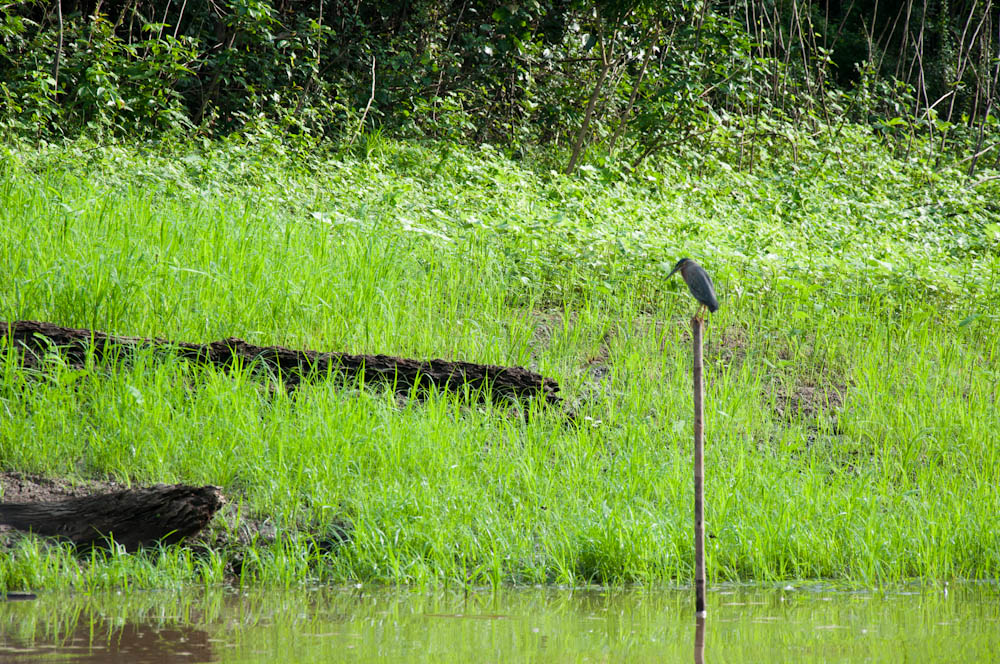 Bird enjoying the early morning in the rain forest

This was a very mellow start of the day activity, when we learnt about some typical species of birds who inhabit in the Amazon and their role in the big picture of the rain forest eco-system. We didn’t get to see any bird particularly from up close, but the canoe ride listening to the sounds of nature before the sun was completely up was very enjoyable. As you listen to nature while being quite, in the middle of such a grandiose place as the Amazon, you can feel truly small and insignificant. And at the same time appreciate the beauty of all that surrounds you.

Back in the lodge, we had breakfast and enjoyed some chill out time in the hammocks area. This is the ideal spot for reading, to take a nap or to simply lay down listening to the birds singing and winds blowing. 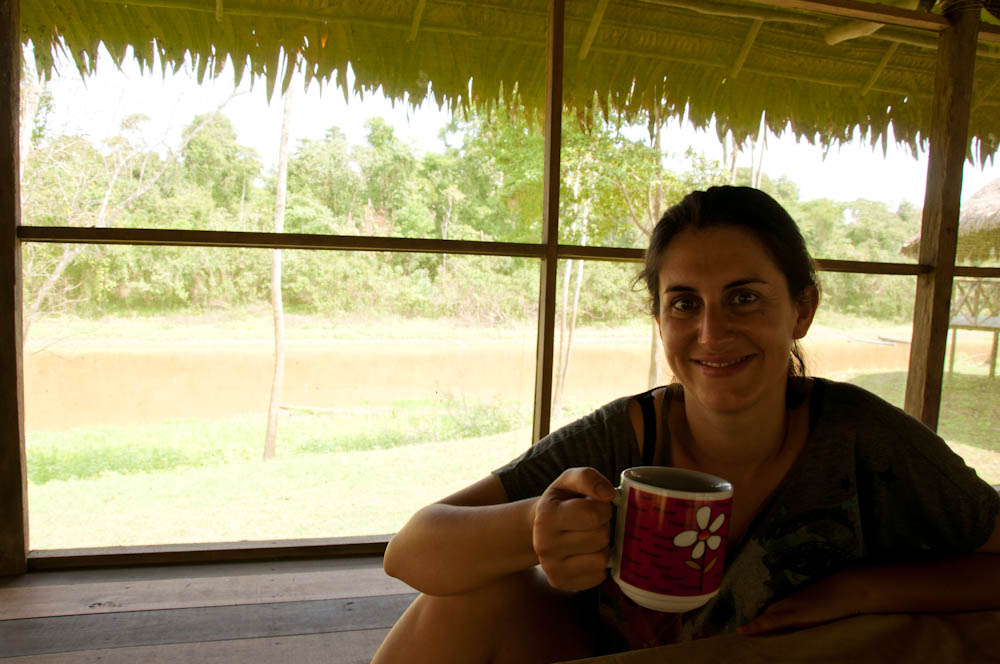 Enjoying breakfast with a view 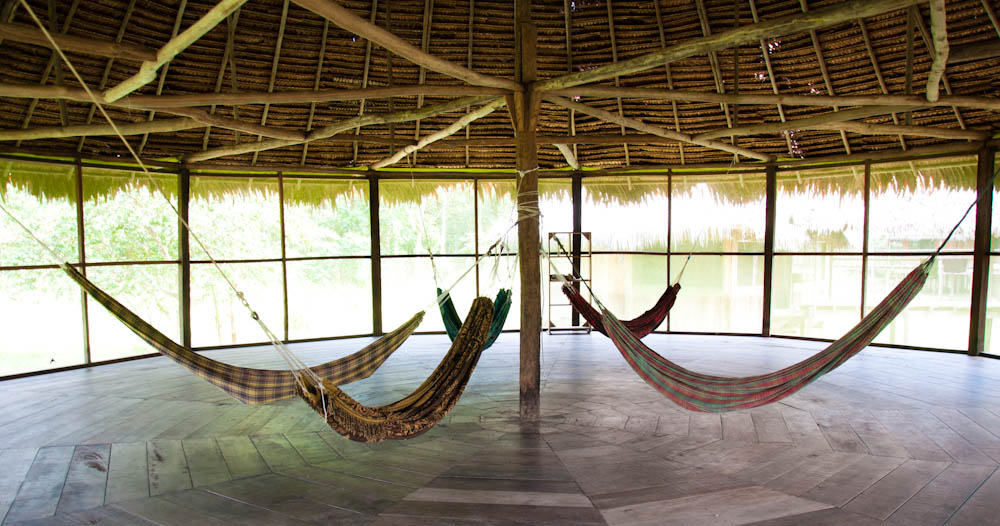 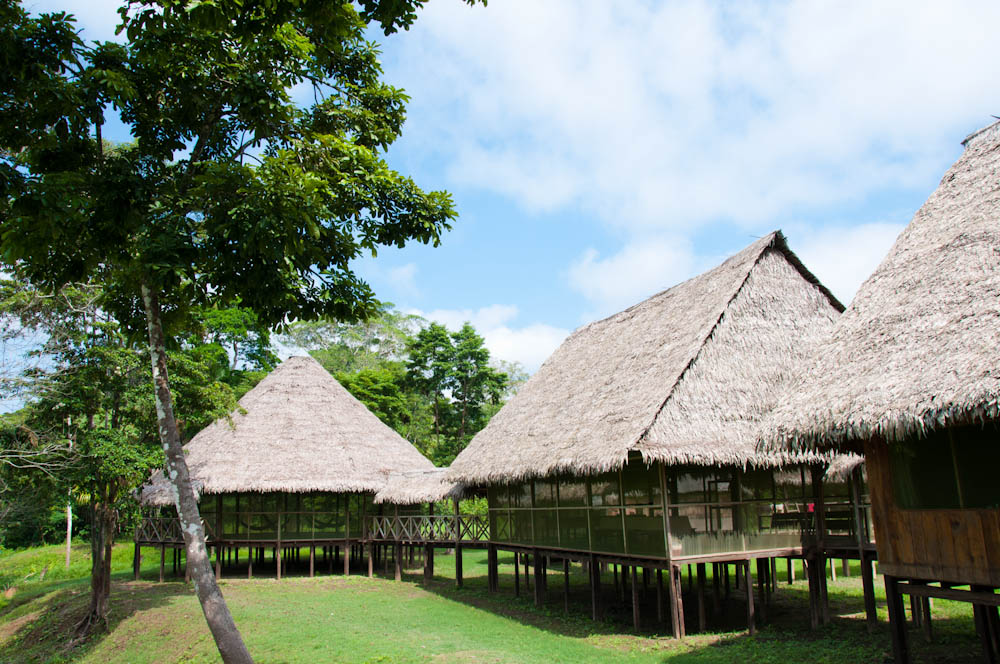 Just before lunch time, we had a new group of travelers joining us at Chullachaqui Eco Lodge. They were a family of Peruvians and so it happened that one of the ladies was obsessed with India – she was so excited to meet Ashray (the first person from India she had ever met in person!) that by the end of our stay she even requested to take a photo with him, telling her husband to stay out of it! 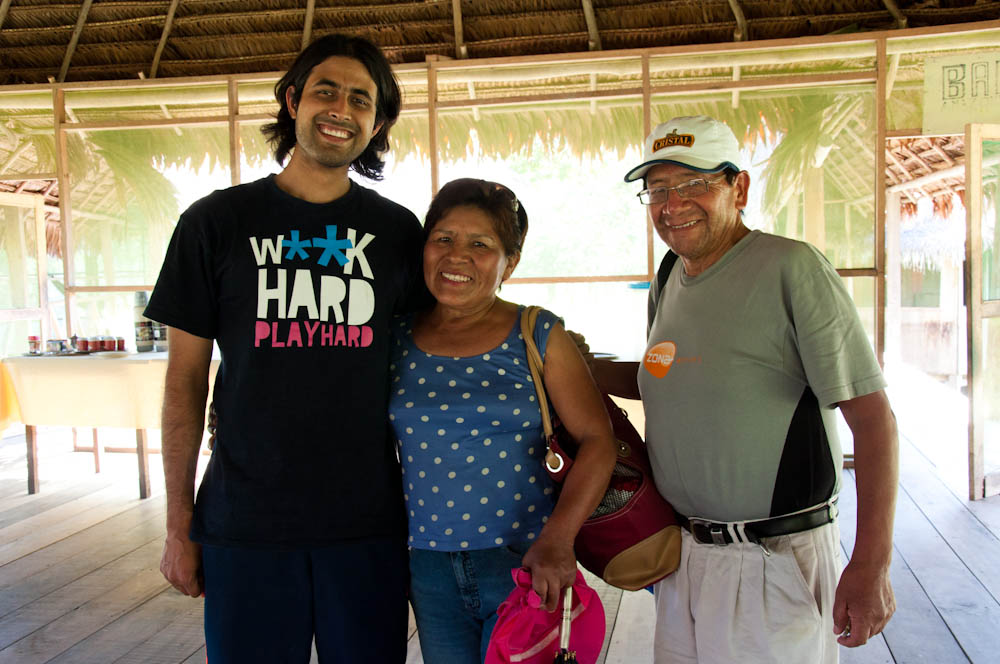 Ashray has a Peruvian fan! Note how she ignored her husband! ;)

Between talks about Indian and Peru, we went together onto the next activity Lobo had planned for us: another jungle walk. This time, crossing to the other side of the river, with the idea of spotting sloths, monkeys and other creatures. As we had previously experienced in Costa Rica, sloths are adorable but rather hard to find! Not because they are less in number, but mainly because they sit up high in the trees and nap in between branches and leaves. But our guide was a persistent one, going up the trees and all to make sure we managed to spot some sloths. 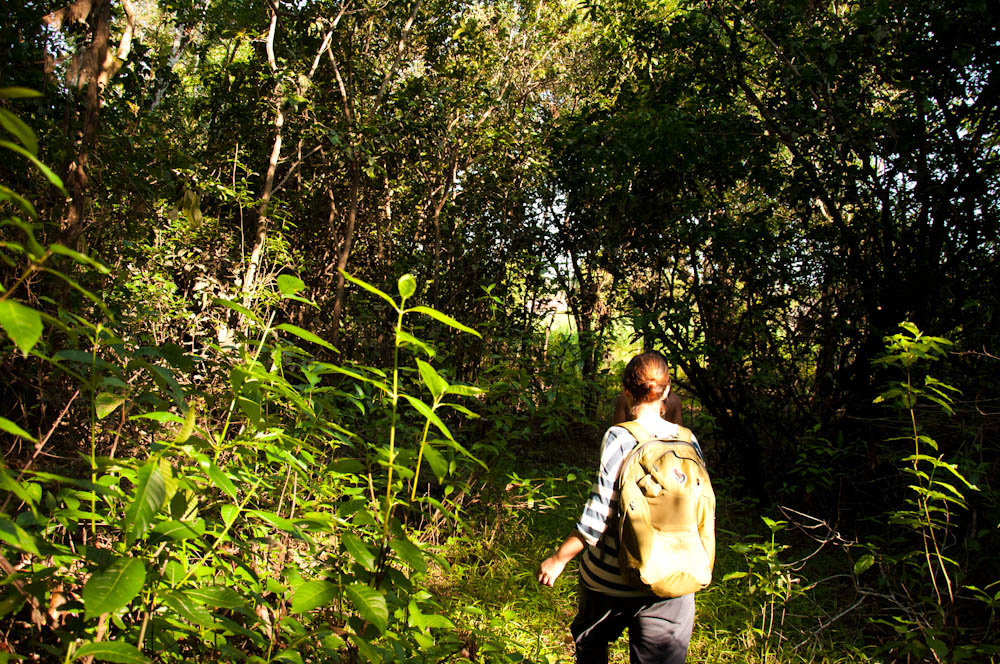 Zara on the jungle walk

Lobo checking out for sloths

Monkeys, on the other hand, were easy to observe. Those fellows can’t stop jumping around – it was almost as if they wanted to put up show for us! Such fun creatures!

The best part of our walk was, hands down, going all the way to Lobo’s village. This tiny Amazonian settlement, with such a great name as “Centro Americal” is home to most of the staff working at Chullachaqui Eco Lodge and served as one more element to help us demystify whatever pre-conveived idea of this part of the world that we might have had.

Centro America is amazingly well organized! With a strong sense of community that makes things work for its population, things seemed to be well planned in order to benefit not only the individuals directly, but their society as a whole. For example, neighbors help each other make their family plantations and harvest. There is also a common boat that locals can use to go sell their produce and fish in the main towns and the city of Iquitos. And democracy is actually a reality in this village, as every 4 weeks town meetings are held to discuss local issues. 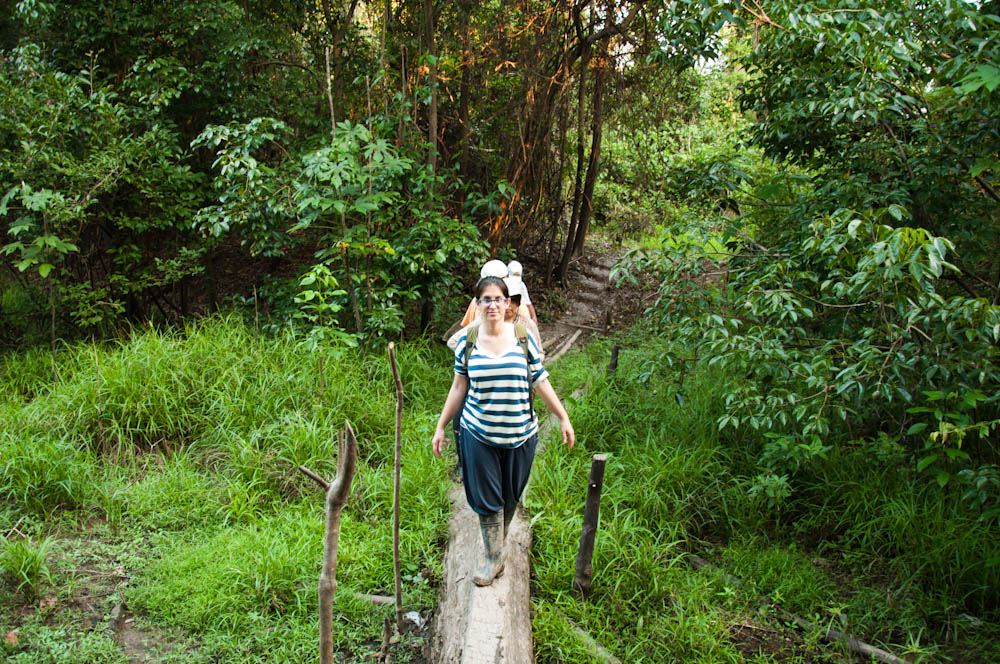 The bridge that leads to Centro America. 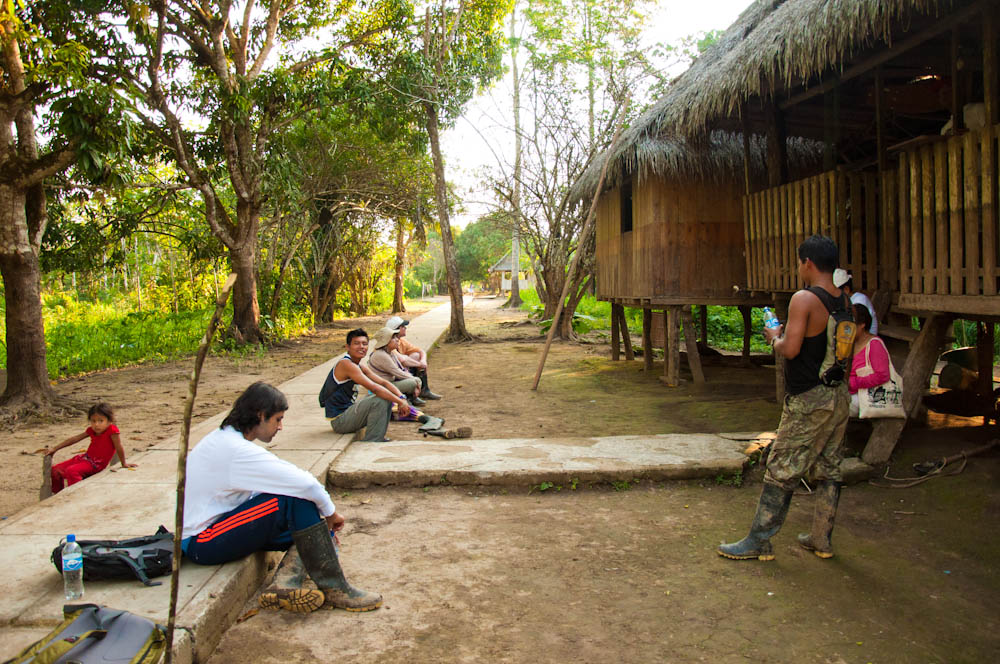 Hanging out in Centro America 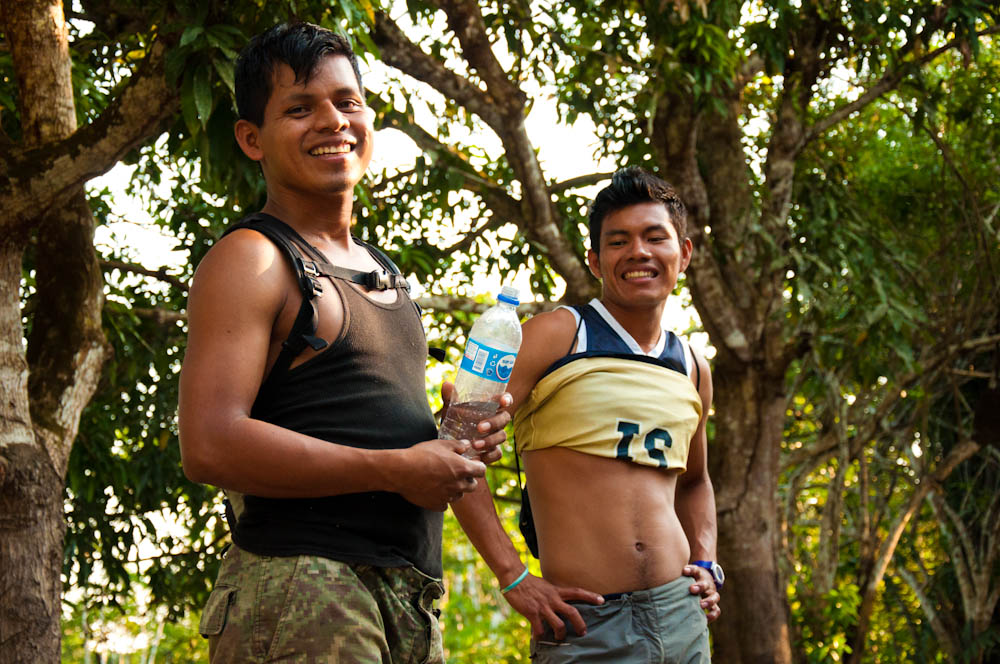 Staff of the lodge showing us around their hood

We had a great time in Centro America, roaming around and chatting with locals that were transporting goods up and down their recently built pavement. This stretch of cement was put up to ensure kids could make it to school even when rains make the path muddy. No wonder Centro America’s rate of alphabetization is actually 100% Pretty impressive, isn’t it? This is not the naked with a leaf covering your private parts kind of community one would expect to find living in the middle of the jungle. On the contrary: this is traditional way of living meets a modern outlook in life at its best! 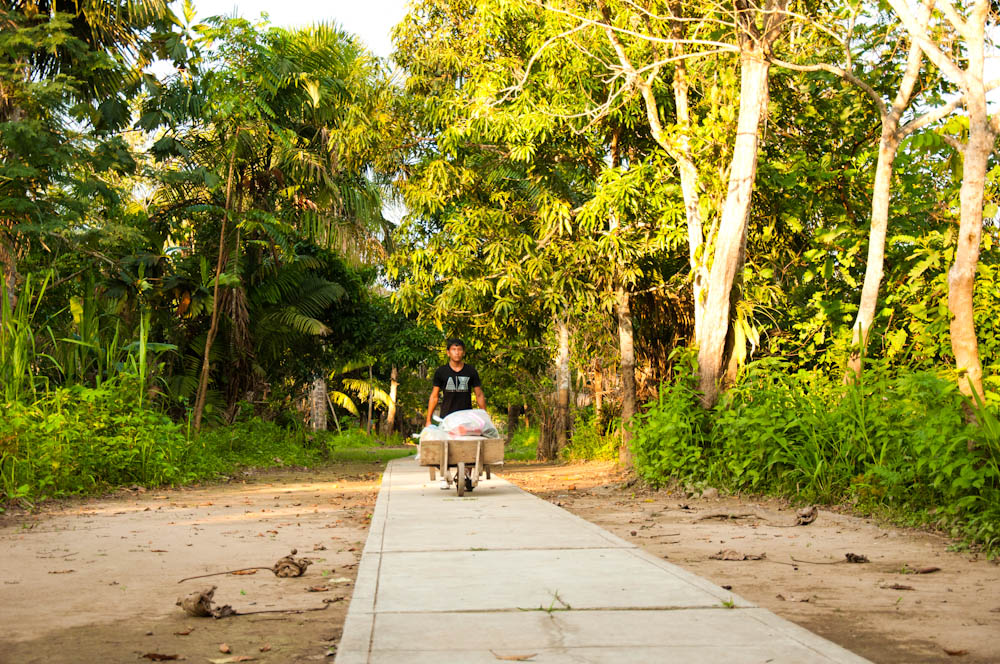 The only pavement in Centro America – locals truly make good use of it! 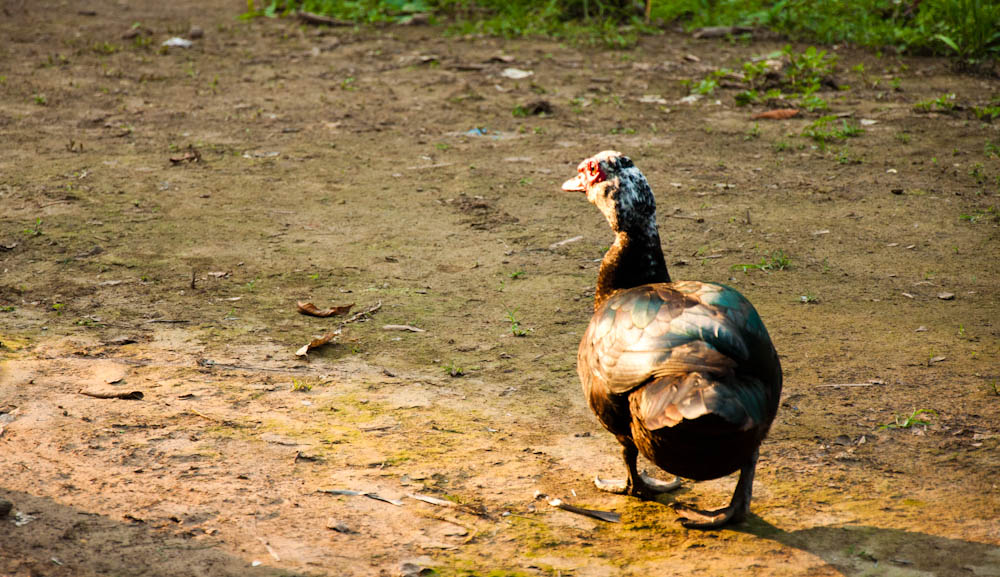 Poultry: an alternative to local fish. For sale and festive occasions. 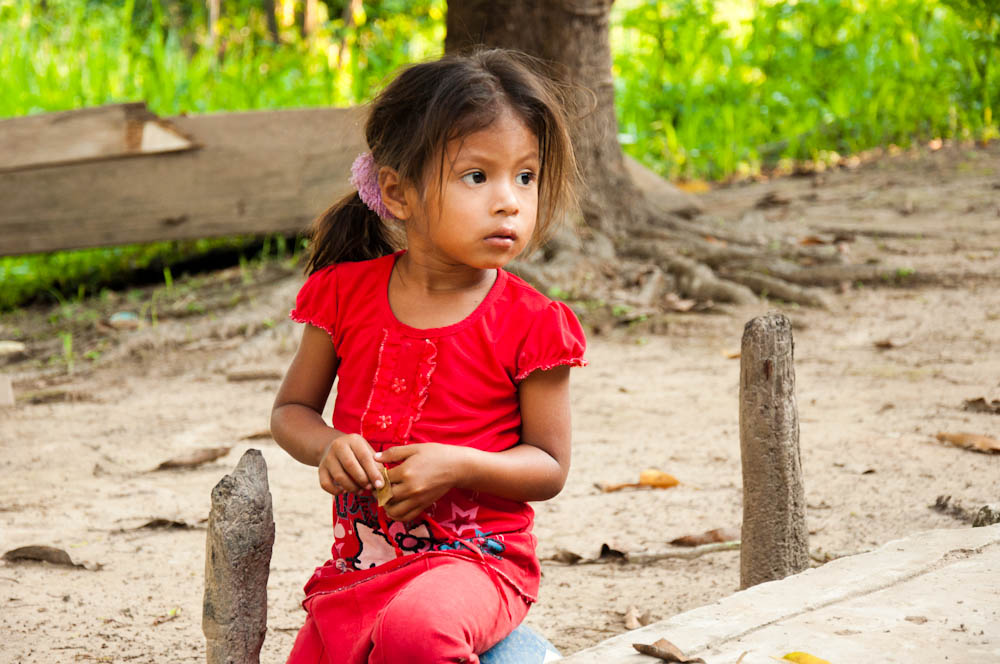 Later that day we passed on the night time excursion and decided to stay at the lodge. We were supposed to go on the look for nocturnal creatures, insects and amphibians but it turns out that they came looking for us instead! While we were listening to stories about how a jaguar had earlier been spotted around the lodge area, we noticed a huge tarantula had come to join us for dinner! It had managed to cross to the other side of the protective net, which made the ladies of the other family staying in the lodge go bananas! The younger woman started shouting hysterically at the same time as she giggled nervously. It was a funny scene to watch!

Froggas was another character we hanged out with at the lodge: we took his video in the outdoors corridor and later on he came to visit us inside the room. Maybe it wasn’t Froggas, but I’d like to think that he was indeed the same one that grew found of us, because I did grow quite fond of him myself! 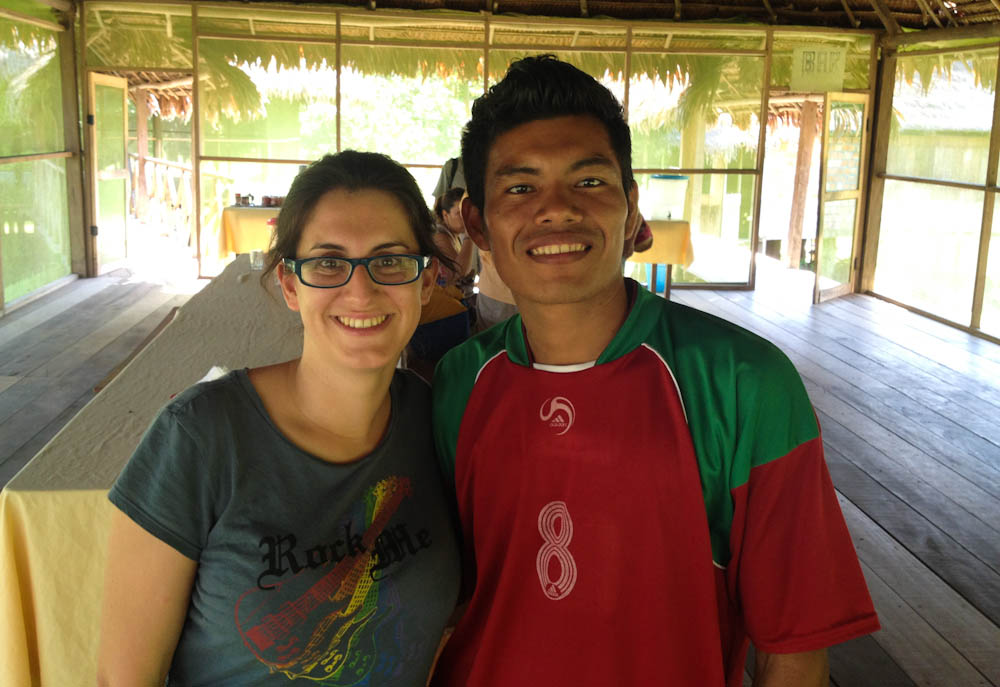 Photo session before we said good-bye: this guy had a Portuguese football jersey in the middle of the Amazon. The world is becoming smaller and smaller!…

On our last day in the Amazon, we had a brief fishing trip during the morning, before returning to Iquitos right after lunch. We tried to fish piranhas but didn’t manage to catch any… none at all. I never thought people would actually fish piranhas to eat (instead, I had always pictured the piranhas eating humans – thanks Hollywood for developing this idea in my head), but they are supposedly quite tasty. Unfortunately we didn’t have a chance to find out for ourselves, as we returned empty handed. Still, during this fishing boat trip, we learnt about the fish species that locals do and do not catch, and understood that not everything is wild in the jungle. There are regulations in place to protect species that could potentially get extinct, such as cat fish. 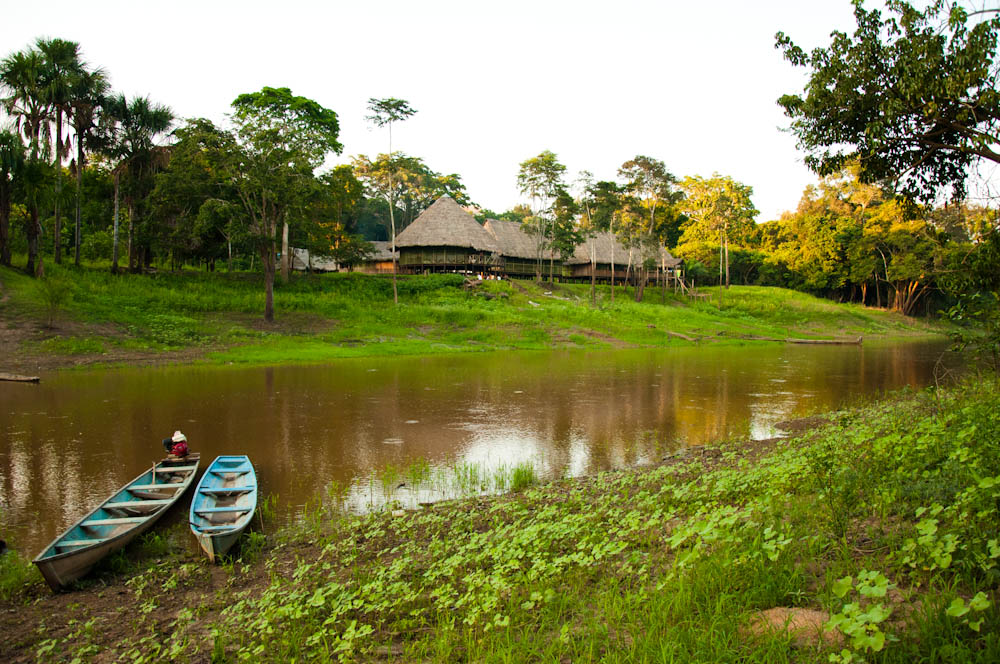 Chullachaqui Eco Lodge from the other side of the river

As we packed our backpacks and took the boat back to Iquitos, descending on the Amazon River, I couldn’t help but already reminiscing on the feeling I had on the first day, as we were entering the rain forest: it reminded me of a scene out of Apocalypse Now.

Book your stay in the Peruvian Amazon!

Packages start at around USD70 per person, per day: including accommodation in double room with private bathroom, all meals, activities and transportation.