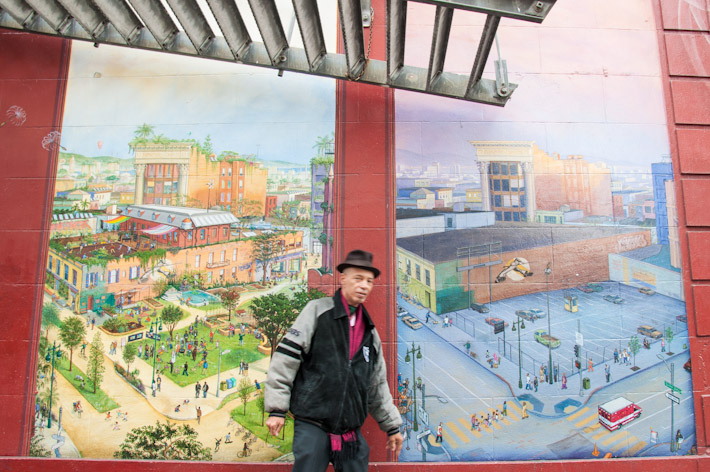 In San Francisco: a Walking Tour of the TENDERLOIN

[a random disoriented guy asked, the first time we went to the Tenderloin]

We walked around the Tenderloin neighborhood for the first time back in 2013. We didn’t know it was a thing. I had no idea it was considered as one of those areas you’re “supposed” to avoid when unfamiliar with it (although it did seem sketchy). I was completely unaware that the streets of this iconic hood in the very center of San Francisco are the home of hundreds of homeless that, for one reason or the other, just can’t cope with the crazy pace of life around here.

Having such a bad reputation, it is surprising that the Tenderloin is right in the very center of San Francisco. Around the City Council and very few minutes walking to all the glitzy shopping areas, where hordes of tourists roam around everyday. We had just happened to walk by it, but when some local friends pointed out to us “Oh my God! You walked by the Tenderloin… you shouldn’t!!“, it really made me wonder what the story of this place was all about.

I did a lot of internet reading to find out more. Most material would focus around the problems that have made the Tenderloin notorious. Homelessness, addiction, prostitution, poverty… Stuff like as if taken out of a movie:

Homeless in the USA, Tenderloin, San Francisco : The Roots – Dear God 2.0 from overlander on Vimeo.

And after a lot of reading and viewing, I came across a video that really caught my attention:

The City Exposed: Touring the Tenderloin from San Francisco Chronicle on Vimeo.

After watching the video above, I really wanted to meet Del Seymour. He’d be my only key to understanding life in the Tenderloin.

Del is a former resident of the streets of the Tenderloin himself. You are not very likely to come across someone as well acquainted with this area of town as he is; nor as passionate about telling the story of these streets and the people living here. In his own words: “I try to present the Tenderloin in a favorable setting. There is of course a lot of grit and grime and crime to see but there is also a lot of upward social situations that exist alongside the negative stuff. “ The Tenderloin neighborhood in San Francisco

Del’s tour starts at St. Anthony’s Foundation, one of the positive pillars of the Tenderloin. At this organization, entirely founded by private funds, thousands of people get fed everyday. But not only that. They have access to free medical attention, they may use a computer room and even attend classes to help them become more tech savvy. At St. Anthony’s, homeless people or anyone in need (no questions asked, no papers required), they will help you apply for jobs and cheap housing. I guess the idea is to be effective: to have an impact in your life so that you won’t be needing their assistance again anytime soon.

I was simultaneously impressed and shocked with St. Anthony’s. In a city with such a tremendous income gap between those on top and those at the bottom (the very residents of the Tenderloin) shouldn’t the government be more active in social matters? I applaud this private initiative, but I must admit that it serves as a bitter reminder of how capitalism is ruining so many basic things. I went back to St. Anthony’s afterwards, to volunteer for a day in their dining hall. Once you are a little bit more “on the inside” you see it’s not all negative around the Tenderloin and, above all, that you shouldn’t be too quick to judge those who end up there. It’s not all drug dealers and criminals in there. There are a lot of old people who are alone in this world. Immigrants still searching for a better life. Single mothers with toddlers. A lot of African-American people who make it clear that, in spite the fact that the USA has a black President, race inequality is still a very prevalent problem. There are also a lot of people who actually have jobs but who are still unable to cope with the price of life in San Francisco. No wonder you feel there is resentment against techies around here. They have brought up the prices of housing and food insanely fast and, naturally, not everybody is able to keep up the same way.

When I asked Del about the main reason why people end up living in the streets of the Tenderloin, his reply was as simple as this: “If you’ve got a thousand people… then we’re talking about a thousand different life stories!“

During a couple of hours, this walking tour takes you around the hood, focusing on how people live here right now and how several initiatives, mainly arts related, are trying to make a positive life-changing impact. Graffiti in the Tenderloin

With Del, you’ll see an illegal sweatshop right there, in the middle of San Francisco. “Made in China” is what’s printed on the t-shirts produced inside, by paperless Chinese immigrants. A sweat-shop in the middle of San Francisco

You’ll come across other non-profit services offered to homeless people, like a storage where they can keep their belongings for free or a church where the homeless gather to seek shelter and support. Support for the homeless inside church at the Tenderloin

You’ll visit several historical landmarks that are part of the neighborhood’s history. And “hotels” which are actually renovated buildings turned into housing for low-income tenants, who occupy single rooms and share bathrooms with those next-door. A hotel turned into housing for low-income residents

The “landmarks” are interesting but the stories Del tells in between are what make this Tenderloin walk golden.

The dynamics between police and residents of this area are very interesting to observe too. Even though there is a police office right in the heart of the Tenderloin, you do not see them “in action” much. San Francisco, as part of California, is known for its fairly liberal politics. As such, as Del comments, the police is not interested in stopping some of the practices that happen around here because, ultimately, they do not have any other alternative to give to people that might be committing small-time crimes but, ultimately, trying to get by that way. Street surveillance at the Tenderloin

Kids in the Tenderloin are not encouraged to wander off the beaten path too much… and this is taken quite literally. That is why there are yellow marks on the floor, which children residing in the neighborhood should follow to get to school, without loosing themselves on any side action that might be taking place. We always hear stories of progress coming out of San Francisco and the Valley area. But it’s enlightening to understand that not all that glitters is gold and, within the same pond, there are fishes of all sizes. Reality is made of different levels and understanding one given reality while ignoring others will never give us the full picture of how things are.

Maybe you’ll find the Tenderloin intimidating for a solo visit. People won’t most likely mess with you if you’re just passing by – ultimately, you are not here to see them from a voyeuristic point of view, but to know more about their life story. But if what you really want is not only to see but to understand the core of this place then, don’t worry, Del shall show you around!

This is a tips based tour.