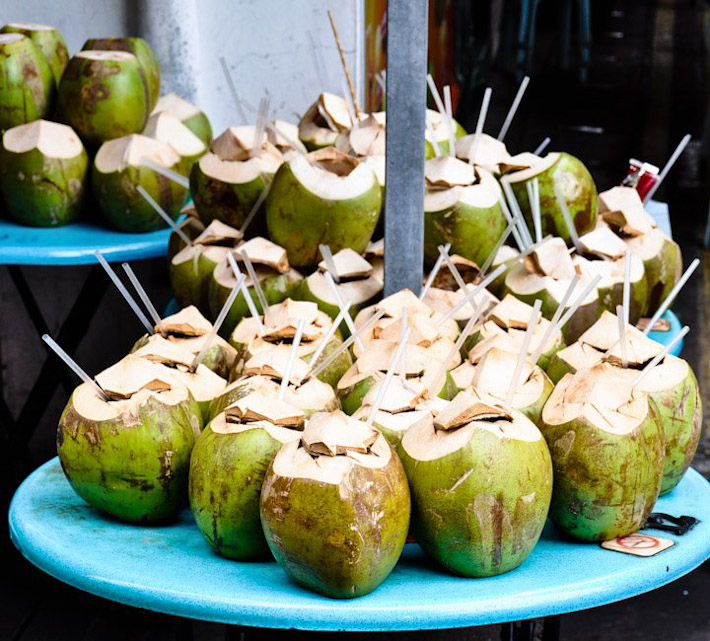 A few years ago I spent a summer in Mozambique for work. I was there shooting a documentary for Al Jazeera TV and this allowed me to meet a lot of people for our interviews. One of them, a singer from Mozambique, wanted to be friendly and bought a coconut for me to drink on a hot afternoon. I took the fruit from a street vendor, drank the coconut water using a straw and once I was done I threw the coconut into a garbage can. Wrong, so wrong!.. The guy that had bought me the coconut asked mildly shocked:

Did you throw away the coconut?!

I said yes, I was done. To what he replied that there would have still been a lot of coconut flesh inside the shell and I could have just given it to a poor person as they would eat it if I didn’t want to. And that was the day when I realized that there is more to having a coconut than just slurping up the liquids! Me and my coconuts have come a long way since then and Asia has been a great teacher!

So now I can share with you how to eat a coconut… properly: It’s cheaper to buy from a street vendor and quality is the same all around. If anything can affect the flavor and effect of the young coconut would be the temperature. Some street vendors have coconuts in portable fridges with ice. This is fairly common in touristic places around Thailand or Cambodia, but not necessarily in India, for example. If you buy it at a grocery store or restaurant they often keep it chilled and it does taste a lot better when it’s cold! It shouldn’t cost you more than $1 from most street vendors, at least around South East Asia.

2. Get your utensils right!

Young coconut in Thailand: with straw AND spoon!

To best enjoy a coconut, you should have both a straw and a spoon. Also make sure that your coconut has been cut with a big enough hole on top so that you can introduce a spoon on it, rather than just a straw. Alternatively, have your coconut cut open once you’re done with the liquid (you’ll need to ask the vendor to do this with an axe as it’s very hard otherwise).

3. Place yourself in a strategical spot Ashray enjoying a young coconut as the sun goes down near Angkor Wat, Cambodia

This is an optional step, but one can’t deny that drinking a coconut surrounded by lovely views does enhance the experience! And as you can read above, this is a post about how to eat young coconuts like a PRO, not like a regular dude on the run, so let’s make things right!

If you’re in desperate need of hydration, though, skip this step and go directly to #4… Drink up and be advised that drinking too much young coconut might make you look like Amy Winehouse for some reason!.. Juice inside a young coconut

Use the straw to drink the coconut water. This is one of the healthiest drinks you can have in the tropics – the coconut water is full of nutrients and minerals and its cooling effect is undeniable! Who the hell needs gatorade, red bull or other factory-made isotonic and energy drinks when you have such yummy gifts from Nature all around? In fact, my Mother-in-law says that coconut milk is the best drink you can have after breast milk, and being from India, she’d know a thing or two about coconuts too!

5. Dig into the flesh Flesh from a young coconut

After you are done drinking… EAT! Spoon out the tender flesh of the coconut that should detach itself easily from the shell. Unlike old (hairy) coconuts, young coconut’s flesh is very tender and somehow resembles jell-o. If you ask for a coconut to go along with your meal, you can drink as you eat your food and then get the fruit’s flesh for desert! I like doing that. There’s nothing more eco-friendly than a coconut shell and in countries with poor waste management, at least you know you’re not contributing negatively to accumulate plastic bottles or cans. Take the coconut from nature, enjoy it and return it to nature itself – it will all be taken good care of!

Have you had young coconut before?