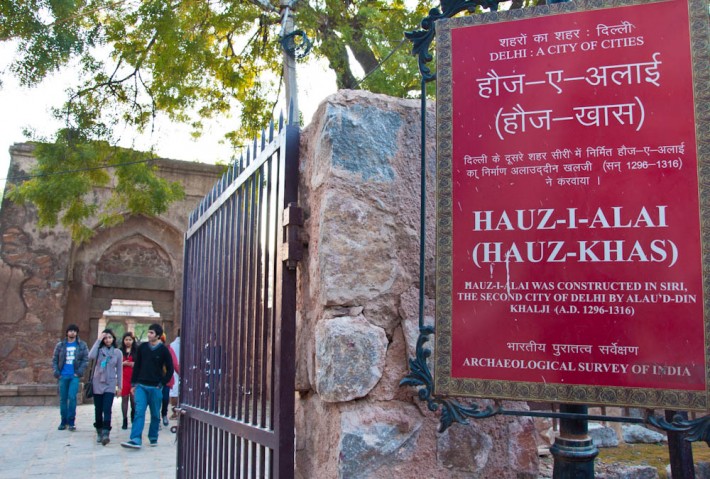 Welcome to Hauz Khas Village, the New Delhi equivalent of Williamsburg in New York, Kreuzberg in Berlin or East London in the UK. Well, not exactly… but Hauz Khas is certainly on its way to become a hipster hot spot. You get the idea.

If you’re in Delhi and you crave trendy hang-outs, alternative cafes, artsy shops, independent art galleries or creator owned boutiques, then this is the hood you should be heading to.

Born around Muslim ruins and a man-made water reservoir dating from the 14th century, this neighborhood of New Delhi is home to an unusual mix of residential areas (they call it village), park and streets lined up with businesses. An end of day view over the Hauz Khas Lake Ladies working on the restoration of Hauz Khas ruins Soaking up the sun, between ancient and hipster times Ashray used to live in this area years ago and he remembers it quite differently that what it is today. It was always green and calm, with life rolling at a substantially different pace than in the rest of the capital. There used to be a few upper-scale restaurants and boutiques here and there, but nothing like what it is today. Now, new [non-chain] cafes and restaurants serving international and fusion cuisine keep on multiplying. Chai wallahs have to make room for gelato carts and burger joints (yes, some of them serving beef even). Shops sell decoration items that are one of a kind and clothes that often mix Indian ethnic style with latest trends from far away. Art, Design and Gods… in India, of course! Giving AC units an ethnic touch seems to be a thing in Hauz Khas! The crowds in Hauz Khas are not the usual people roaming around street markets elsewhere in the city; neither they are the stereotypical Delhi Saturday afternoon mall-goers. They are young, hip and they crave something different than the usual fare across the city. Also, there is a great deal of foreigners around. Some of them might feel a little bit more at home around here. Both locals and visits need to have money to hang out in Hauz Khas – prices do tend to be higher than in your average cafe or restaurant across Delhi. Being hipster in India involves a lot of East-West fusion Young girls in Hauz Khas dress to impress, in a non-traditional way. Hanging out in Hauz Khas Village But Hauz Khas is still a village. Bars might be serving trendy cocktails during happy hour, but next door you’ll still have a chat (Indian street food) vendor selling roasted sweet potatoes or other typical Indian goodies. Hipsters: don't you dare take over the locals' parking at Hauz Khas Village! These guys won't probably be eating at Bagel's Cafe after a hard day of work. Some work, some play It is the amazing contrast that makes a stroll around Hauz Khas so entertaining. People watching at its best with an unusual opportunity to walk from hip to rustic in the space of 100 metres.

Where else in the world do you get to experience that?!