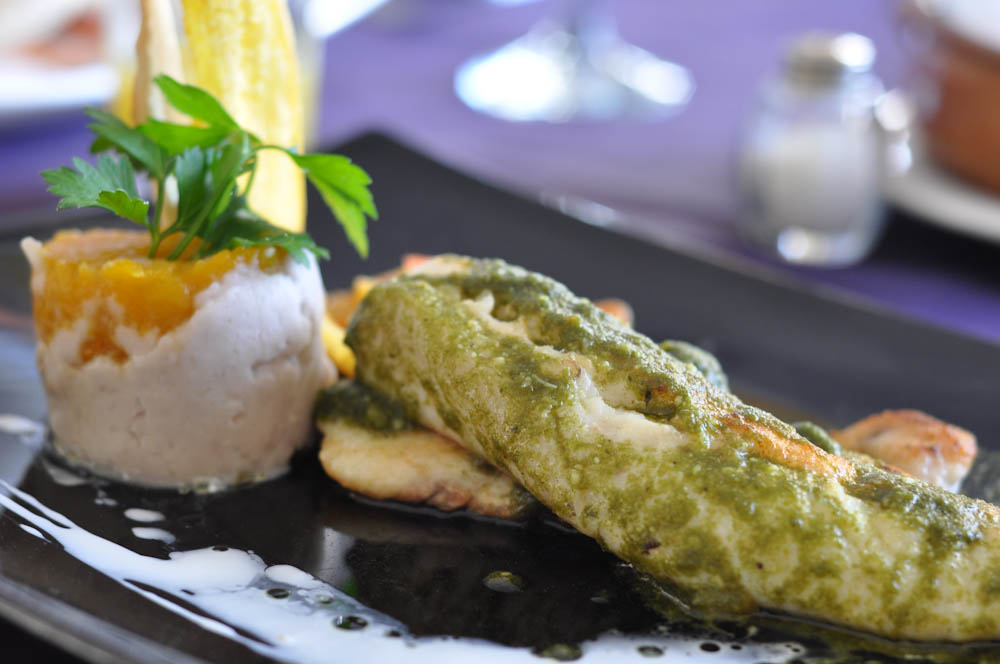 Food in Cuba has no taste!

There, I said it. It sounds harsh, but it is true.

I am that girl who grew up in a family where my Mom would barely put salt in the food she cooked once she had high blood pressure (that happened while she was pregnant with me, by the way). Still, in Cuba, I had to salt almost every dish I had!

I bet people that go to Cuba and stay in resorts would probably disagree with this, but let me remind you: staying inside a resort 24/7 is not the same as staying in a country. And going to the beach in front of your resort doesn’t qualify as “going out”! Rice and beans is the staple food in Cuba – and other parts of the Caribbean and Central America. Cubans get monthly rations by the Government, including rice, beans, cooking oil, coffee and sugar. Knowing this, it’s easy to picture the kitchen table set up in the evenings at most family homes. Having breakfast at a local cafeteria: coffee with powder milk

When you earn USD10 a month and a liter of milk costs USD3, you won’t get many chances to have variety on your plate. You get some fruits and vegetables in the street carts and produce markets (mostly bananas, plantains, root vegetables, onions, pineapples and guavas), but that’s pretty much all you can buy with the national currency – Pesos Nacionales.

Everything else would be sold in CUC, the Convertible Cuban Pesos introduced mainly for tourists, making prices ridiculously high. I repeat – RIDICULOUSLY HIGH!

How can 1 liter of milk cost almost 1/3 of a monthly salary?!

Specially when half a liter of rum costs around USD2. How?! All of a sudden, things you have always taken for granted look like a luxury: milk, biscuits (even Marie, I am not even talking chunky chocolate-chip fancy ones!), eggs, yogurt… No wonder that 2 of the 4 or 5 shelves that small mini markets have, display only rums and other alcoholic drinks. And that’s actually what you see the people walking away with – that does not come with the monthly ration. 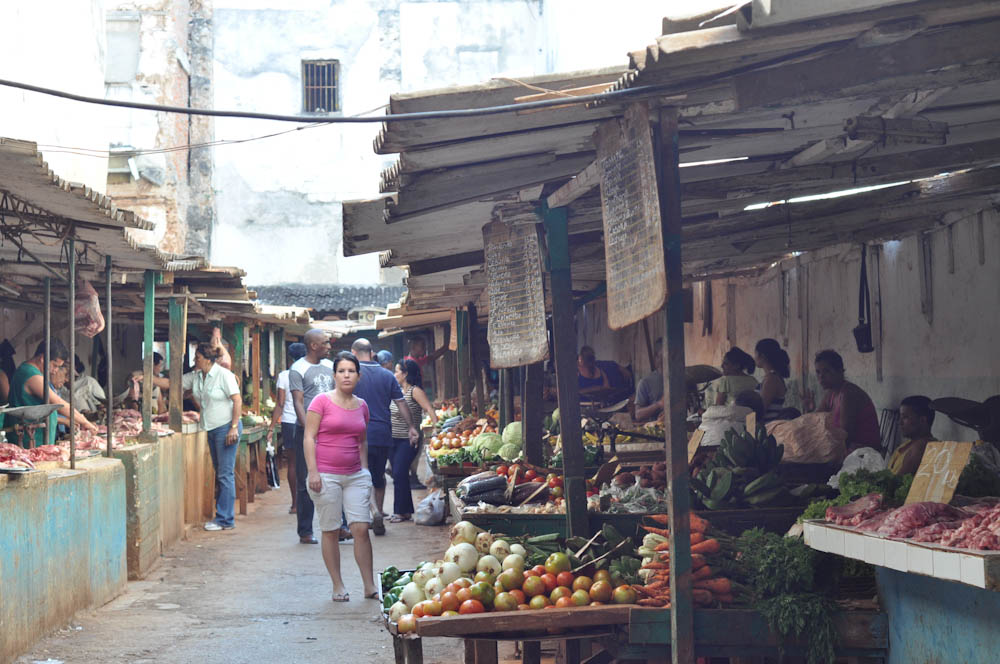 At least, no one is hungry in Cuba.

Government rations provide that every single person in the country will have something (if basic) to eat. The truth is that no one looks hungry or mal-nourished. They look quite healthy and fit, in fact. But having so little to cook with, Cubans haven’t really developed cooking as the art it sometimes can be. At least, I didn’t have the chance to experience much in this department.

The advantage of eating in a place like Cuba, where everything is sourced within the country and rare are the edibles you buy packed in a supermarket (I craved potato chips during 10 days, just because there were none available!), is the organic nature of ingredients. Fruits and veggies are local and so is fish. I always try to eat fish when by the coast – not only because it’s fresh but also because it is cheaper than in other places. The most common food you’ll probably find around Cuba is a piece of fried chicken, along with rice & beans (arroz moro or moros y cristianos – which translates into “moors and christians”, now go guess who’s the rice and who’s the beans!), a tiny side of salad and fried plantain (called “male banana” in Latin America) or yuca (a very starchy root vegetable). This is what the real people of the real world eat. Pork is also widely available but beef tends to be rarer and more expensive.

Vegetarianism, isn’t really a concept. You are deprived everyday by the natural order of things – why would you deprive yourself even more?

When eating out in Cuba, you will find 2 kinds of restaurants: government owned ones and “paladares”. The first, like pretty much everything else in the country, are owned and run by the government. You can easily recognize them by the excess number of employees (ahh, that beautiful thing called public service…), the higher prices in CUC and the tasteless food. That’s right! Government-owned means less to savor on.

“Paladares”, on the other hand, are privately owned places that typically offer a wider variety of dishes and more appealing options than boiled rice with boiled beans. The government has until recently forbidden the existence of Paladares in the more touristic places, like Varadero, but since Fidel Castro is not feeling well and his brother Raul rose to power, they have become easier on the entrepreneurs who wish to offer some flavor to this country. 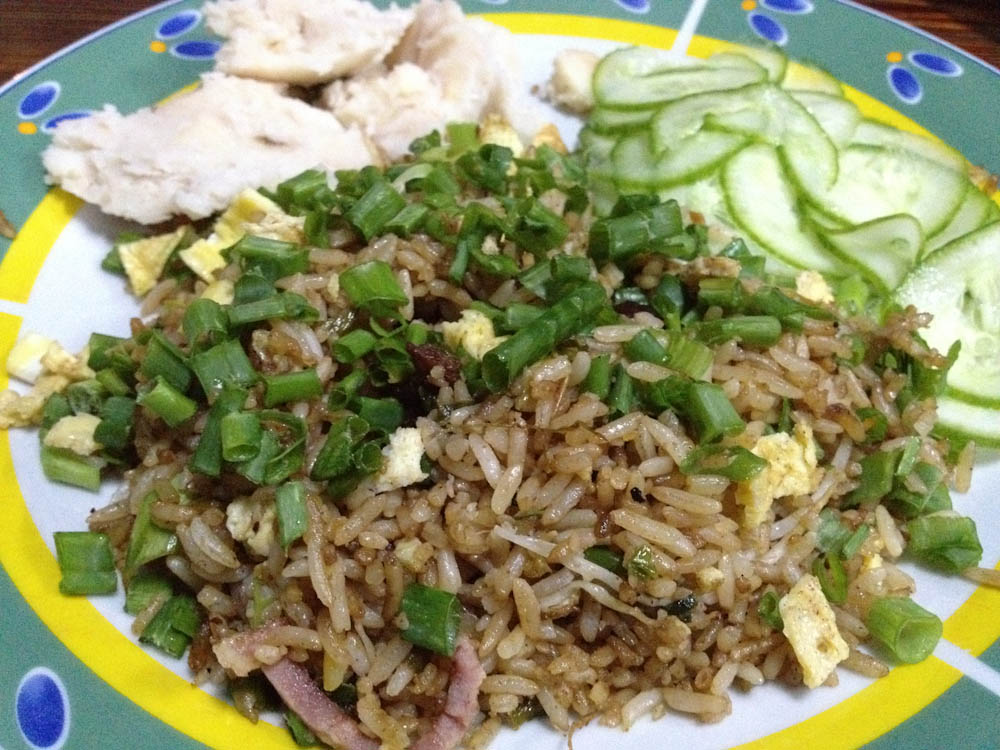 Street food is not very common – there is a lot of ladies selling salted and caramelized peanuts on the streets and some carts with burgers, drinks and other snacks, but that’s about it. The closest that you get to fast food can be found at the widely available, privately owned cafeteria counters improvised out of people’s living rooms or garages. These are basically establishments offering simple foods and drinks, operating through a window in the wall. Most common dishes are spaghetti and pizza (normally with tomato and shredded cheese “napolitano” or, in an upgraded version, with ham), sandwiches (cheese, ham, omelet or the humble mayo sandwich – yes, just the mayo), sometimes burgers, fruit juices and coffee (if requested with milk, it will be done with powder).

Don’t expect to find any fast food chain in Cuba. There are no international franchises and we were surprised enough to find Coca-cola at the airport and in some touristic spots! 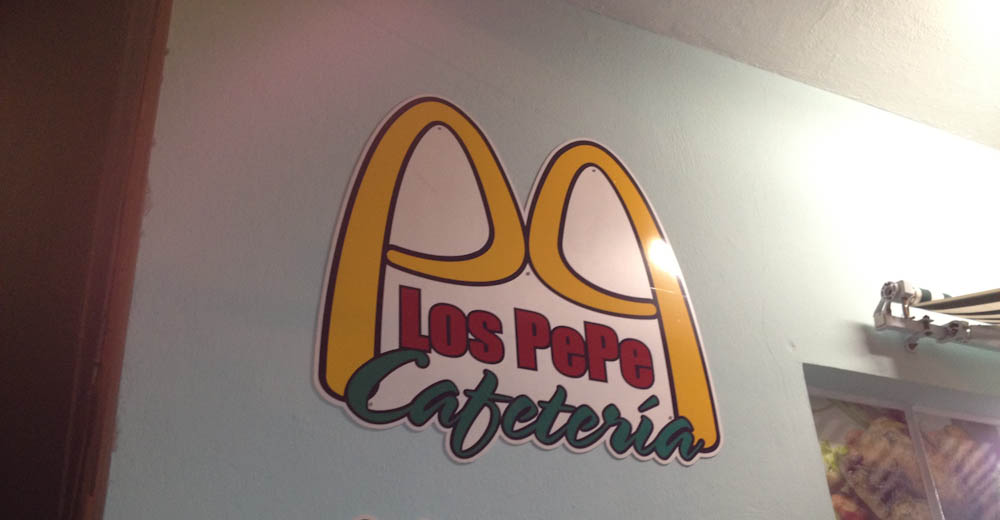 The closest to McDonald's you'll ever get in Cuba.

Cuba is unique because of the way its society works.

And if I had to eat bread and water everyday just to be there and experience it, I would!