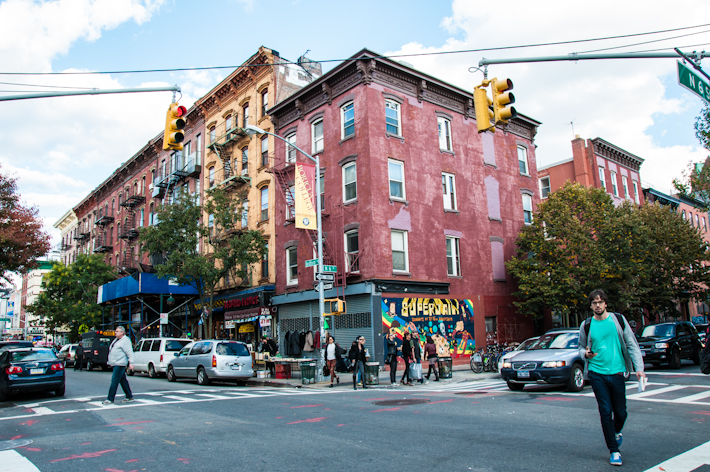 Walking from our apartment in Queens to the nearest metro station was like reviving our time in Latin America. During a 10 minute walk, we could smell fried empanadas being sold in street carts, read boards for Cuban restaurants selling rice and beans, see a variety of Mexican eateries and, to match, listen to Spanish being spoken all around us.

I knew New York was a very multicultural place but it still astounded me the amount of Latin people, and specially Mexicans, that we would find everywhere. Not only it felt Mexicans were running this place (if not the city then anything related with food, for sure) the signage in the streets and businesses is displayed both in English and Spanish. There was already at least one thing to love about NYC!… Staying in Queens felt perfect for us – there’s a big difference between staying in a regular neighborhood versus a touristic place. We were not dying to stay nearby the landmarks anyway. We were not going to go up the Rockefeller center or pay large dollars to go to a rooftop and enjoy the skyline. When you travel for a while, you get tired of some of the obvious sights, and you just want to observe and interact with real life as much as possible. Sometimes, it’s as simple as just walking around.

Another observation that took really less time to make was that everyone seemed to have good shoes and an iPhone – inside the subway, you almost stand out when you’re not typing or reading on an iPhone. And it’s funny how different parts of the world have their preferred phones: in Dubai people used to be on a Blackberry frenzy (until iPhone started taking over) and in Hong Kong it was rare to see someone with a phone that wasn’t a Samsung Galaxy.

As we were not after photographing our pretty faces against the most recognizable spots of the city, we went on an ethnic neighborhood hunt. It’s really interesting to observe how international communities build little versions of their own country in one given place and, let’s face it, these are the kind of hoods where you normally find the best food. 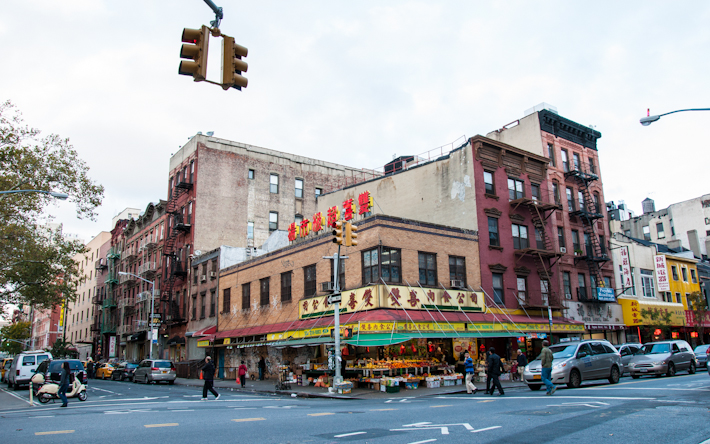 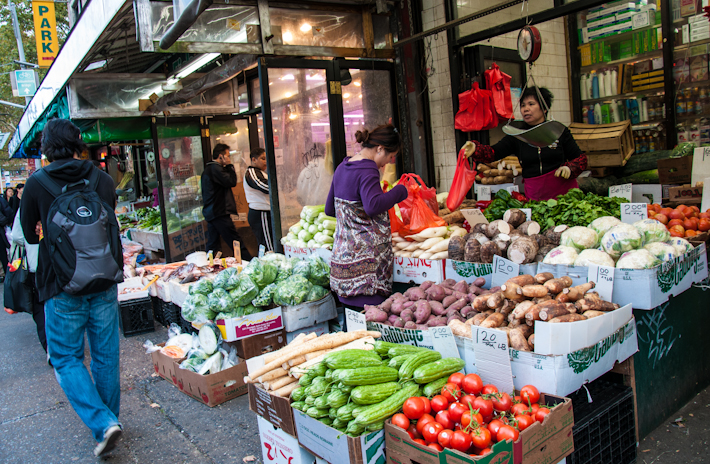 Plenty of groceries being sold in Chinatown!

Walking past Soho on our way to Chinatown, restaurant boards read fancy dish names with prices also too fancy for my fancy. But Chinatown itself treated us really well. Apart from the joy of walking around streets full of grocery shops, we had a great Chinese food buffet for about $4 each. You can’t beat this price in NYC! And you can’t certainly beat the feeling of sitting at a place full of Asian looking people, where boards were written in Chinese characters and where you don’t even understand what 2/3 of the dishes on the buffet are made of. This is the excitement that comes with “the real deal”. 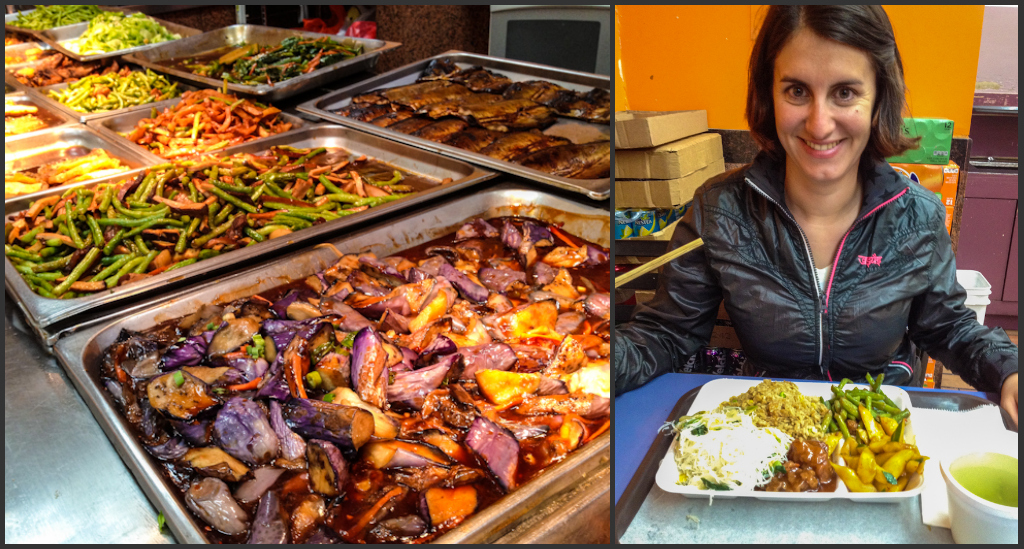 That’s the beauty of big cities: you can get food from everywhere. Our Chinatown immersion ended up with an old Chinese lady hitting Ashray with her walking stick so that he’d make way for her to walk by. Movies had taught us that bullying is a real problem in the USA, but I can’t really say this is how I pictured it!..

Gourmet dreams aside, New York is a city that offers so many opportunities (even if at a price), but where competition is obviously proportional the size of opportunity. No wonder Frank Sinatra sang “if I can make it there, I’ll make it anywhere”. But the character of this place is undeniable - you can feel the energy, the pulse of NYC.

Another thing that caught my eye while we took extensive walks around different neighborhoods of the city, was the amount of street performers we’d come across: rappers, dancers, acrobats, singer-songwriters… Generally, these weren’t mediocre performers expecting some small change. We saw really talented people, who appeared to make some fairly decent bucks.

Apart from sharing a little bit of our travel budget as a compliment to these artists who have the balls to put themselves out there, we also went to Broadway. As a musical slut who had to feed on musical films for most of my life instead of live shows (small town…), I was not going go pass on the opportunity to enjoy a Broadway musical live. Ashray got us excellent tickets for Bring in On and we spent 2 hours full of joy, high pitched voices, awesome moves and cheerleaders’ acrobatics. Broadway, I will miss you. Bollywood, don’t sweat it, part of my heart is still with you. 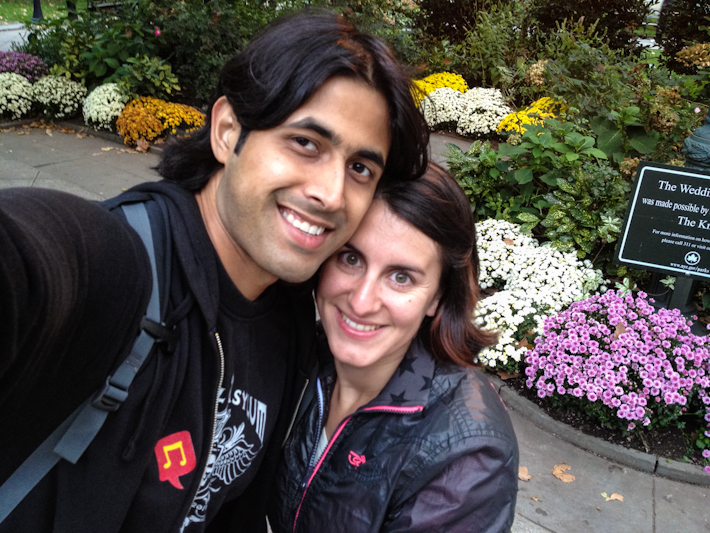 I spent the next couple of days, amongst other things, thinking about the way people perceive goods in a city such as this. Capitalism has made it possible for citizens to get anything, no matter where in the world it was produced. 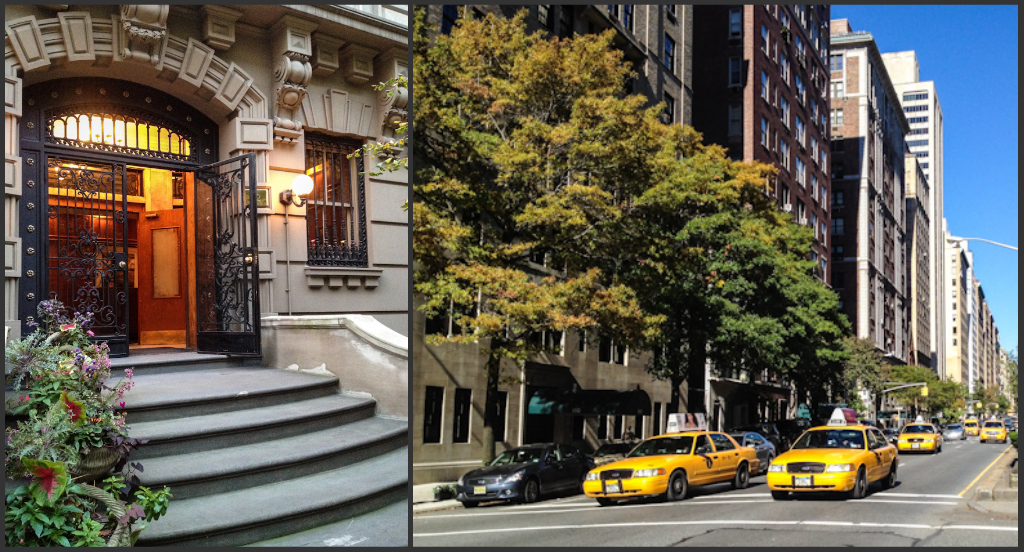 The Upper East Side: the fanciest side of NYC

Everything seems so accessible, so desirable, so no wonder everyone seems to be in such a rush all the time: you have to work to keep up with all of this. But I wonder if most people appreciate this accessibility anymore, as this is probably perceived as “normality” by now. Even if perceived as regular by some, I was amazed at the variety of cuisines available in one given block, as Ashray would drool as we walked by amazingly well maintained parks and sports’ facilities where young ones exercise and old people play table games. But do locals find it all amazing? Same as a bushman in the Masai Mara won’t be thrilled with the sigh of a giraffe, I guess it’s just not possible to be amazed everyday. 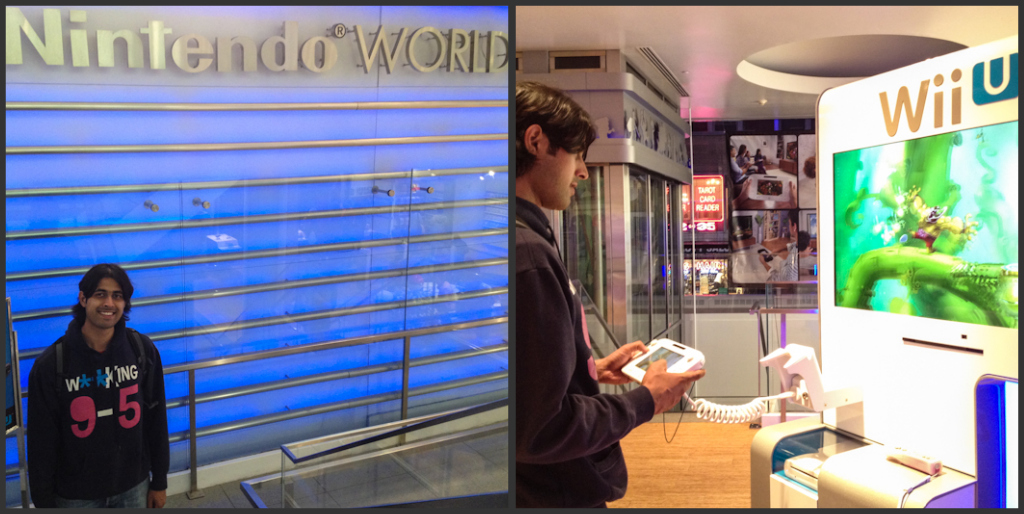 Ashray having a videogame blast at the Nintendo World store

As there are certain goods that are notoriously cheaper in the USA, I took advantage and bought an Apple laptop for myself – this is my portable office now. We’ve visited several Apple stores around the world and find that they are ALWAYS full of people. This is not an exaggeration. Between buyers and curious people looking to try the new items on display, the concentration of  macfans amazes me every time. In the UK, we had to pre-order Ashray’s iPhone online and still came across a queue at the shop. “Do you have a reservation?“, the sales guy asked when it was our turn. For a second there I thought we were checking in a hotel. In New York’s 5th Avenue, the Apple store is open 24/7, 365 days a year, and although we visited rather late, it was still full of people. I remember clearly how a cleaning lady was supporting her tired looking body against the standing mop, looking around her. I wondered if, like me, she was thinking this was a crazy phenomena. I was also amazed to observe so many people sitting inside, and amongst them, the odd poor looking fella. When I paid for my laptop and mentioned to the assistant “it’s amazing how full you guys are, even at this time of the night” he said something that I don’t think I could have heard during the entire past year in the Latin countries: “oh yeah, we let all these people wander around here because we know that, although right now they don’t have money, when they do get a job this is the place they will come to with their first salary. They must get an iPhone“. 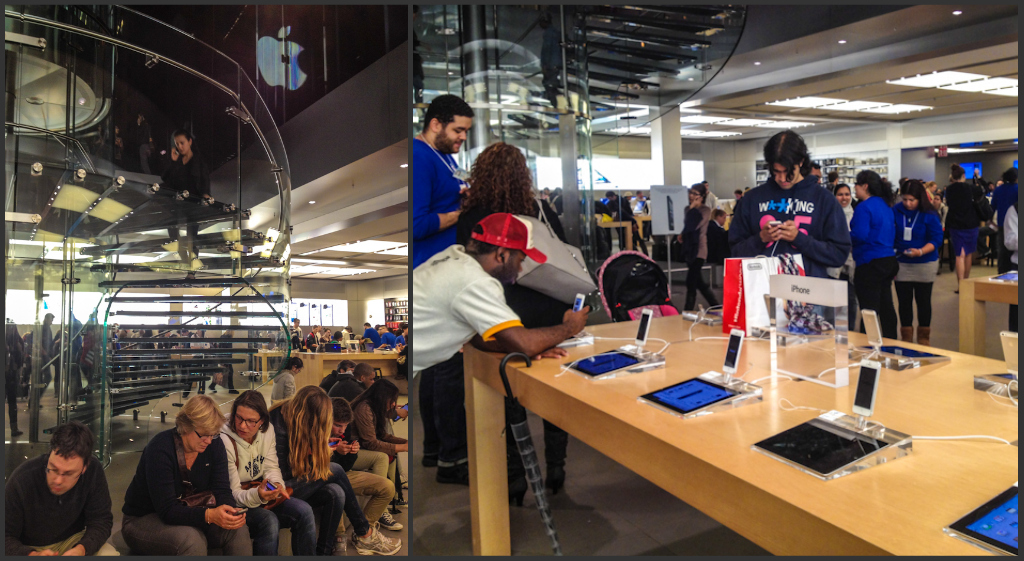 Madness at the Apple store on 5th Avenue!

And so we walked to the metro and back to Queens, where our hosts John and Sabrina invited us to enjoy a glass of wine by the fire in their back yard. After roaming around Manhattan, this end of day felt down-to-earth and heart warming.

One hand in the air for the big city
Street lights, big dreams, all lookin’ pretty
No place in the world that could compare
(Empire State of Mind, Jay-Z)