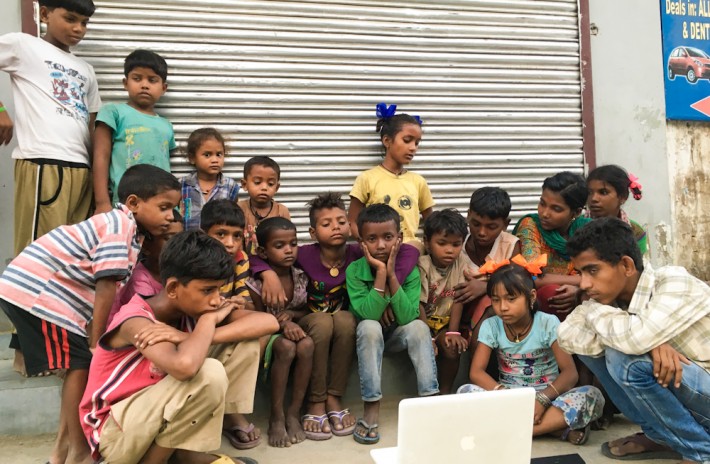 No matter how many countries we keep on visiting, rare are the places that can manage to have the same impact on me as India does. On the same day, or even in the same hour or at the exact very minute, India will make sure you experience a rollercoaster of emotions. Some of the most beautiful things I have ever seem, are in India. While some of the most depressing have come out of there too. But no matter how shaky reality can be in India at any given moment, one thing is for sure: this country and its people always give me a boost of positivity and hope.

India is not accommodated. India goes with the flow, but in a way that looks towards a better day. If not for her, at least for her kids one day.

A few months ago we were spending some time at home in Delhi. In our building, I saw a notice asking for volunteers to teach kids from a settlement that is right outside the back gate of our compound. These are the children of men and women who mostly work construction jobs nearby for small daily wages. The kids stay at home and spend hours on the street playing around and passing the time. They do not go to school. Perhaps because the parents move every so often, or maybe because they fail to acknowledge the benefits of an education. Chances are, it’s simply because it hasn’t occurred to them as such. It’s a complex issue.

When I saw that notice about the little school run by volunteers in our building, I was eager to participate in teaching these children something. I wanted to feel like I was finally part of the community in the area where we spend so much time in Delhi, while trying to make a positive contribution. But my lack of Hindi skills didn’t take me far… I joined a couple of classes, conducted by some of the retired residents in the area and, more than teaching, I got to sit there like a student, learning how to count to 10 in Hindi. Let’s face it: good intentions aside, my participation had zero positive impact.

I enjoyed the kids’ energy though, and I wanted to spend more time with them. I admired how, even though they have to share one tap of running water amongst about 40 residents in their humble dwellings, they made it a point to always have a bath before class. I enjoyed the fuss they would make when at the end of their less than 2 hour class, they would get a treat of biscuits, juice or fried noodles. And I marvelled at how the teenagers would make sure to open the packages for the little ones, before they put anything in their own mouths. Hindi or not, I wanted to spend time with these guys.

Technology can be amazing when it comes to bridging language gaps. We are so lucky now-a-days! It occurred to me that, having a laptop, I could do so much to entertain these kids after class. And this is how our Cartoon Afternoons came about…

After showing a short video about health and hygiene during morning class, I told the kids I would come in the afternoon to show them more cartoons. It sounded like fun! Finally, we needed no words to communicate. We had movies, we had smiles, we were sharing something.

Our setting was humble, but we had a screen, we had speakers… and so the crowd gathered! 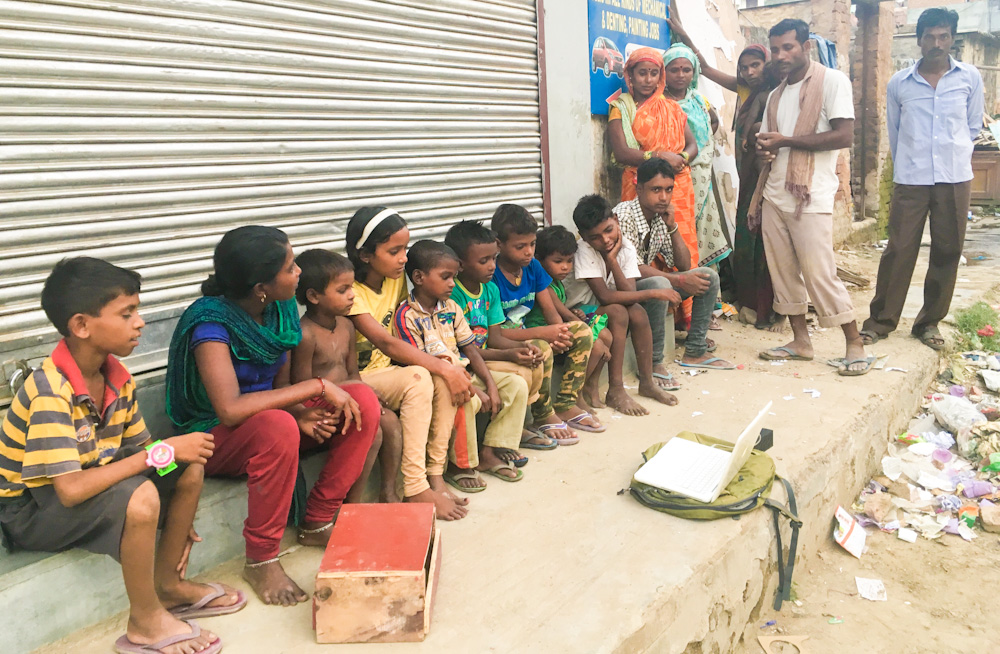 On the first day itself, we started with a bunch of kids who’d normally be playing outside, until their parents got home in the evening. And, to my surprise, we had the adults joining in too, after a hard day at work. Some would come and go glancing at the screen, while some others, particularly the ladies, became regulars when cartoon sessions would run late and they’d still make it home in time. 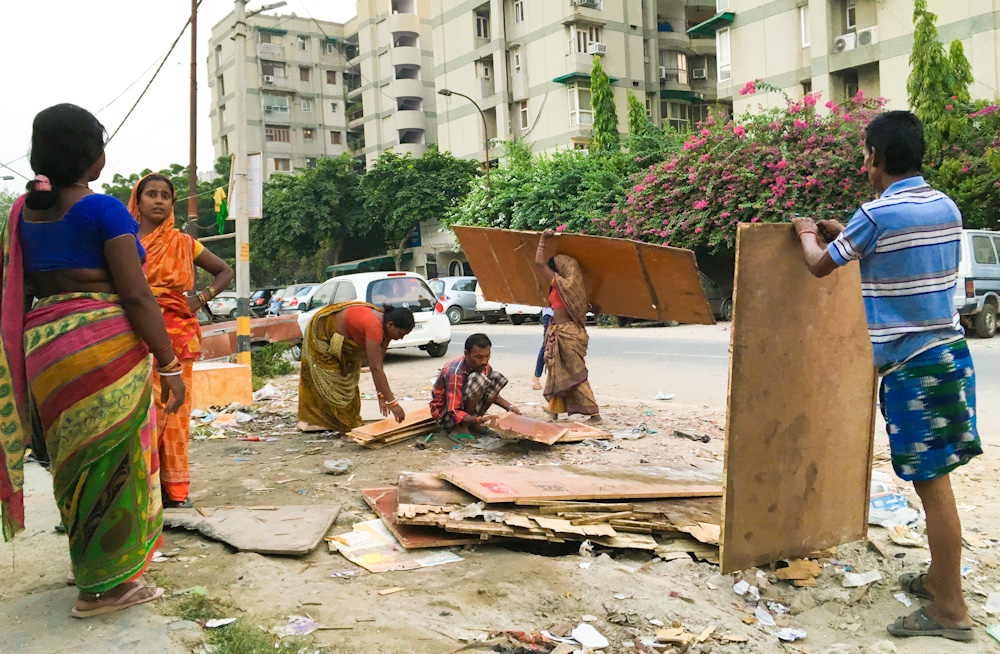 Parents cutting pieces of wood, while we were watching cartoons

We would always sit by the side-walk, in front of the milk distribution store which only opens in the evening for inventory. The milk man wouldn’t mind. In fact, there were days when he himself sat on top of the refrigerator, and enjoyed the colorful animations. 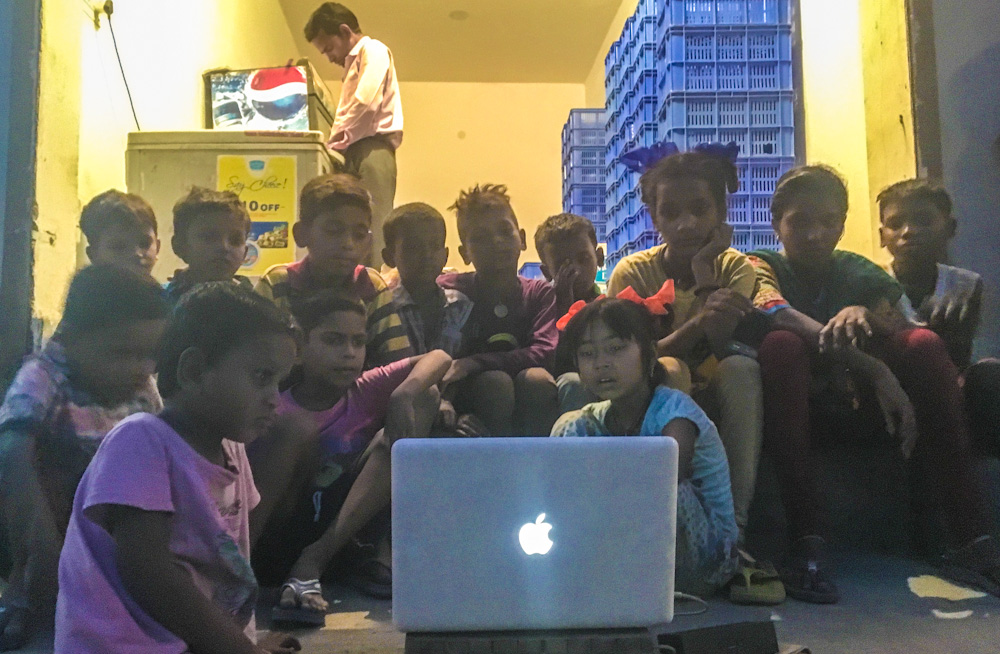 Still watching cartoons, as the night came down

Even though the “original” kids from our cartoon sessions were the kids from this small settlement of Hindu people right outside our gate, it didn’t take long for other kids down the street to notice that we had something going on here. These other kids are Muslim, and live in a different type of accommodation down the same road. Their parents work as maids and auto drivers and, as such, they can afford better rooms with shared bathrooms. Sitting by the side walk, our backgrounds didn’t matter. We were all having fun the same way.

While kids may love cartoons all over the world, there is something very local about kids’ entertainment in India, no matter what religion they follow. There’s no need for Batman or Superman around here! Hindu mythology is so rich when it comes to stories and characters, that some of the most beloved cartoons are based on the religion itself. Day after day, I let the kids select what we’d watch the next day. Their favorites? Any movies involving Krishna (god of compassion), Hanuman (the monkey god), Ganesha (the Hindu god with a human body and an elephant’s head) and the fictional Chhota Bheem and Baal Veer. The only non Indian thing that seemed to catch their attention the most was Doraemon, which I was happy to play, as it is one of my favorites too! 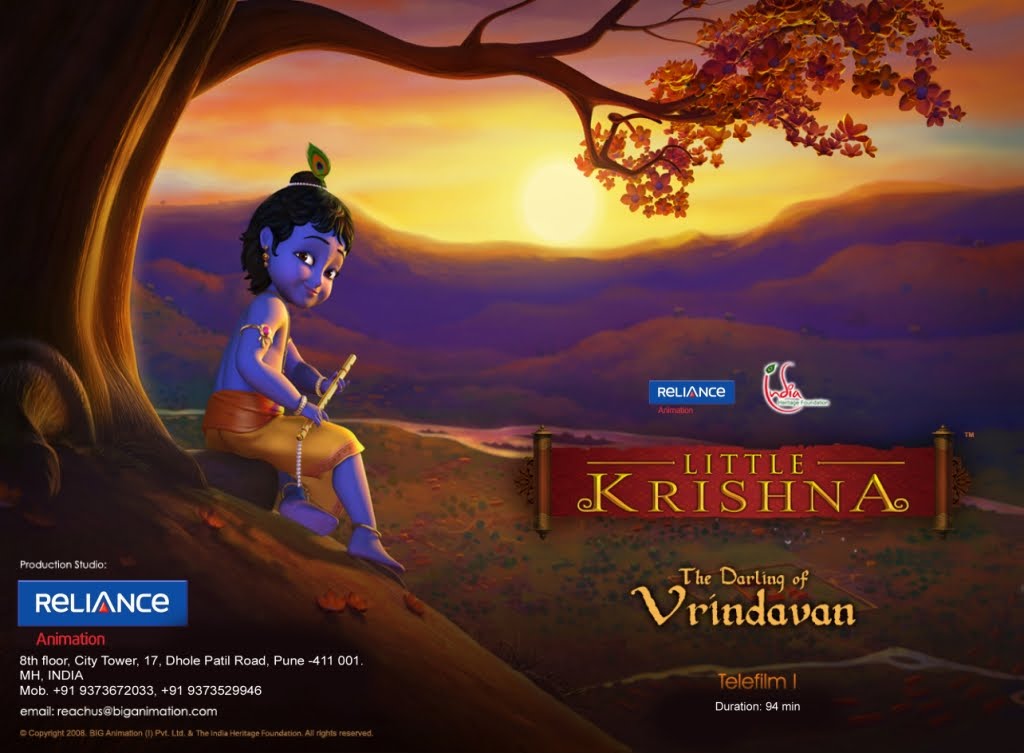 Kids who spend most of their days without adults around, not going to school, lack a certain structure to their day. I was happy to join in and have a scheduled daily activity with them. Considering their contagious enthusiasm, I believe I may have been the one who benefited the most from these encounters.

It doesn’t matter if it was sunny or raining for a while, our cartoon afternoons were a given as long as I was in Delhi. On some days, we had around 30 people trying to get a glimpse of the small laptop screen. The people in the nearby shops already knew our scene, and would sometimes come and spend 5 minutes with us. Moms from down the road would bring their toddlers for a little while when they had the time – particularly on the days when I brought our photo camera that prints pictures on the spot. 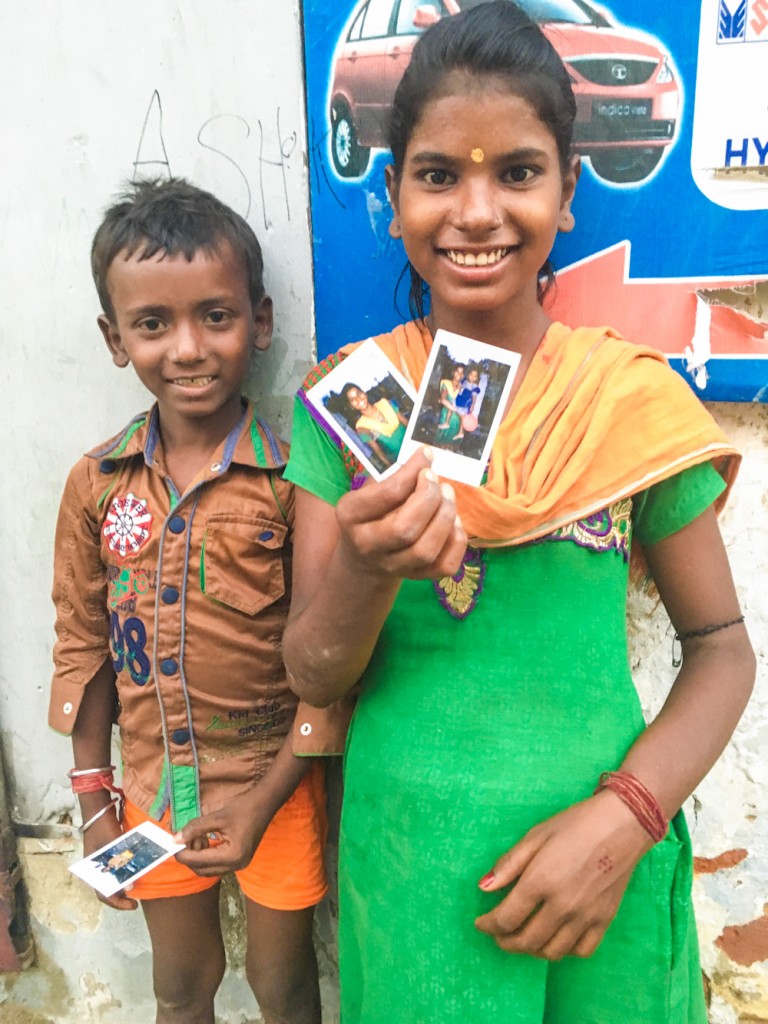 Neighbors from our building would also curiously approach us and smile, seeing that everyone was having fun. At some point, we even had a street vendor selling dried fruits parked in front of “our cinema”. Some parents would buy their kids 10 rupees worth of spiced green peas, and the children would actually share with one another, with no complaints. 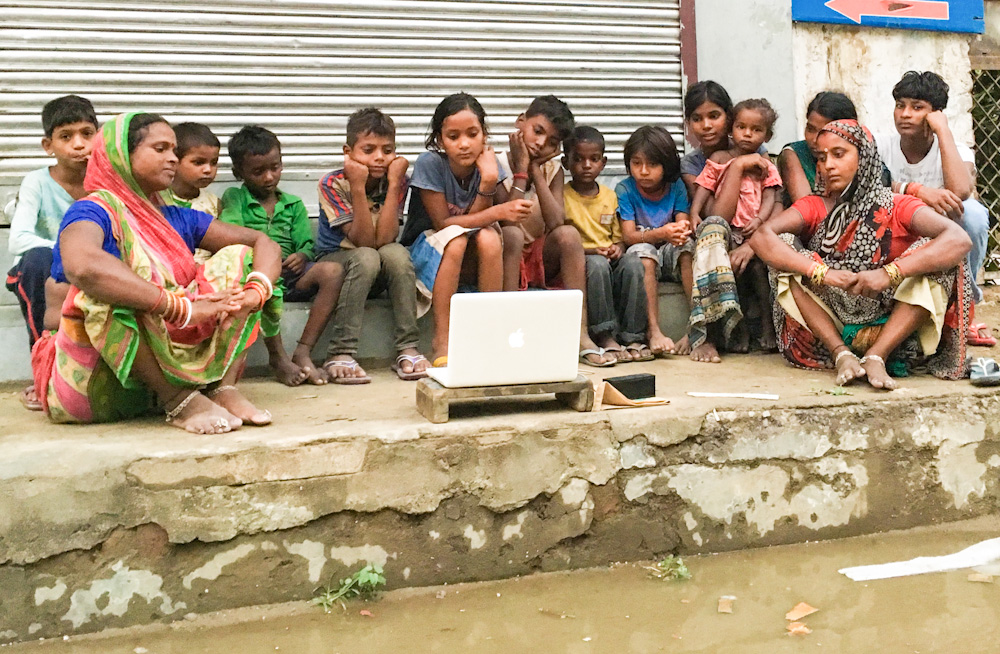 Cartoon afternoon after a rainy day

I learnt a lot sitting out in that side walk for a couple of hours every day. I would cross the gate back into our building complex, where nicely dressed, well fed kids would be texting on their mobile phones or playing badminton, and I’d feel like I had just travelled back and forward in time. This co-existence of realities reminded me of a quote I once read, by Indian writer Arundhati Roy: “India lives in several centuries at the same time. Every night outside my house I pass a road gang of emaciated laborers digging a trench to lay fiber optic cables to speed up digital revolution. They work by the light of a few candles.”

What I mostly learnt during cartoon afternoon is that you do not need to be privileged to be happy. Hope and a positive attitude keep you happy, as long as you focus on making the most of your life, without comparing yourself much to others around you. Even though we didn’t get to verbally communicate much, I felt that these kids would value that I’d come every day to meet them, and they would also give due importance to material things. They would, for example, bring something to put below the computer so that it didn’t have to sit on the dirty side walk, and would make sure the little ones wouldn’t kick the speakers that were on the floor, when playing around.

When our time in Delhi came to an end, I decided to make a special movie for the kids… featuring themselves! I gathered the photos we had taken, edited them together with the Chhota Bheem theme song they would normally sing along to, and made them their own little video:

When we returned to Delhi a few months later, I excitedly installed our usual set up by the side-walk. I was so eager to play their video, thinking they were going to love it. I pressed play and they smiled in surprise. The video came to an end and with a thrilled tone of voice they shouted “Can you put Little Krishna?“… “Nooo! Play Ganesh!“… “Chup karo! Hanuman lagao!“. It was me against the most powerful Hindu gods. You can guess who won…