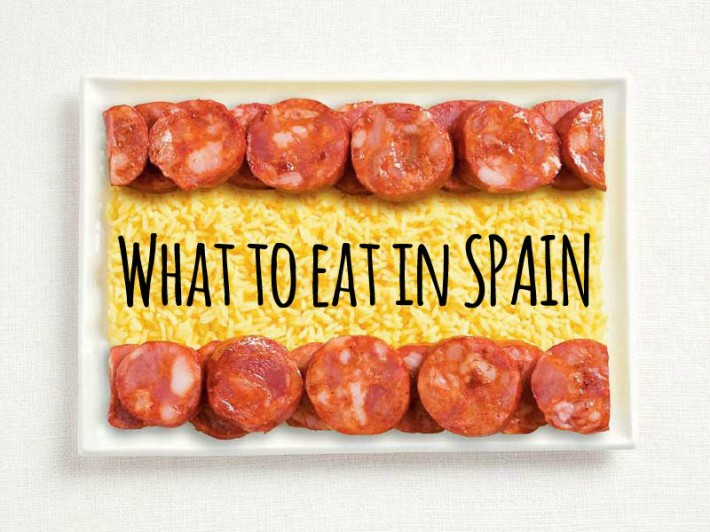 When trying to get acquainted with the culture of a new country using its food as way to connect, there is nothing worse than limiting ourselves to eating out in touristic places. Restaurants that cater to visitors often to do offer the full range of possible experiences. Dishes are adapted to please the average visitor  – for example, how many times do you find blood sausage in touristic joints across Spain?! Furthermore, the selection tends to concentrate around the most famous preparations, neglecting other foods that are as deserving of the lime light as any.

Think of what you know of traditional Spanish food for a few seconds. I bet paella, tortilla de patata (potato omelette) or jamon (Serrano ham) have crossed your mind. In order to expand the pre-conceived ideas of what Spanish food is all about, today we focus on less known dishes from Spain. Dishes you may come across not only in Madrid or Barcelona, but also other great travel destinations across mainland Spain and the islands!

These dishes are still very typical and characteristic, but first time visitors won’t necessarily know them or might not always come across them in the most touristic spots. But it’s just a matter of heading to those places that do not have a menu in English, and you might just get pleasantly surprised!

While tortilla, cold cuts such as jamon or chorizo and Manchego cheese are often known by travelers visiting Spain, there are many other treats that will go well with a local glass of wine before your main meal. Potatos in the islands are different to those found in the Spanish mainland, and closer to the original mighty tuberculous from South America. Small potatoes are boiled with their skin on (which becomes wrinkled with the heat, giving it the name “arrugadas”), salted and drizzled with a local pepper sauce known as mojo. It’s not often that you’ll come across fully vegetarian preparations in Spain, but tumbet is one of them. It consists of sliced fried vegetables, such as potatoes, eggplants and red bell peppers, served in layers. Colorful, summery and great as an appetizer or light main dish. You can’t travel to Galicia (my family’s native region in Spain) and not try one of the most iconic octopus preparations in the country: octopus Galician style! Boiled octopus gets sprinkled with salt and paprika, and drizzled with plenty of local olive oil. This is one of those dishes that proves that great food doesn’t have to be complicated. (tip: dip chunks of bread on the remaining olive oil with paprika… leaving all those flavors behind would be such a waste!) Octopus can look intimidating for someone who hasn’t eaten this type of seafood before, but if you are going to try it for the first time, this is an easy going preparation as the meat tends to be tender and the small pieces won’t make you think that what you are actually eating are sliced tentacles.

So you thought Spain was all about Paella? That is a very complete rice dish indeed, but Spanish cuisine has a lot more to offer. Here are just a few examples, to open your appetite… My bias towards Galicia when it comes to food in Spain has driven me to suggest you another typical dish from this region. This is actually the most representative main meal from Galicia and it consists of lacon (the front leg of the pig) boiled with potatoes, veggies and, of course, grelos, that is, turnip greens. Meat lovers will dig this one. The meat is fatty and heavy (even more when it is served along with chorizo sausages) but the boiled leafy greens will balance the rich flavors. Traditional from: Valencia and Catalonia

The darker brother of the famous Spanish Paella, this rice dish is actually very similar to paella but it is totally black. The color is given by cooking the rice with squid ink, yet it includes a great selection of other sea creatures cooked in the mix too. Don’t order this one on a first date… unless you are into black smiles! As a half Portuguese person, there is no way I could overlook our beloved salted cod fish. Pil Pil style is the most famous preparation of this type of fish in Spain: it involves bacalao (salted codfish), garlic and, as always on this side of the world, plenty of olive oil. The fish gets cooked in its own juices along with the olive oil (this is not fried) creating a gelatinous sauce that, intensified with garlic, will make the fish or anything that you dip in it taste truly Mediterranean!

You have probably come across churros, alfajores or some variation of flan if you’ve traveled in Spain or any Latin American country. But here are other desserts you may want to try next time you are in Spain. Traditional from: the North-East Regions of Spain

If you’re a fan of dairy desserts such as creme brulee or custard, cuajada will suit your taste! Milk is curded until it reaches a texture harder than yogurt and closer to soft cheese. To make it dessert wise, cuajada is topped with honey and/or nuts, or sometimes sweetened from scratch (like the cuajada you can find in the yogurts’ section at supermarkets). I’d say go for it with honey and crushed walnuts on top, as the combination of a smooth base with a gooey and crunchy texture takes a simple cuajada to the next level! It might sound odd to some, but this dessert is called “fried milk”. Well, it involves a little more than that, but not that much more. A mix of milk, flour, egg yolks and sugar is left to settle until solid. It is then cut into small portions, fried and covered with glazed sugar and cinnamon. A very wintery dessert! This is a personal favorite of mine and perfect for those who enjoy a sweet breakfast or, why not, dessert after a savor breakfast! The key ingredient that makes this pastry’s flavor stand out is saim, a type of reduced pork lard that also guarantees the extremely soft texture of this sweet. You may find ensaimadas at most pastelerias (pastry shops) across Spain these days – vegetarians, please abstain!

Have you been to Spain?

What yummy things have you eaten there?