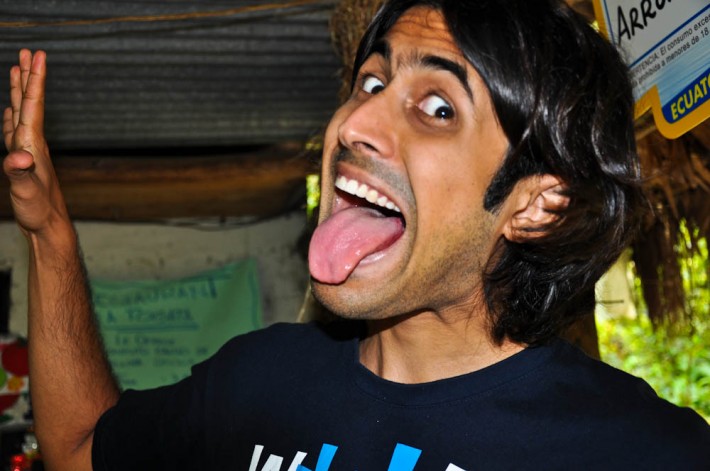 Sometimes, it’s like the harder you try, the worse things go!

The main down side to travel for an extended period of time is the lack of consistent social life. You might meet people, but you do not have your family and friends around, and that becomes even more noticeable on special occasions. 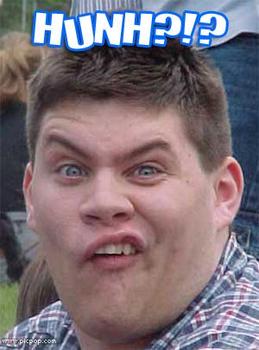 This is the face the receptionists made as I discharged my frustration!…

If I think about it, for example, we only told 3 people in person that we got engaged. The first one was a nice British lady at Heart’s Cafe in Ollanta (Peru) who complimented us on how in love we looked. Naturally we told her that we had just gotten engaged and she got quite excited saying “that’s fabuloussss!!” and sharing hugs and smiles with us. That actually felt really nice! Over the phone and emails one can’t get the same kind of warmth. The second people to hear the news in person couldn’t care less: it was the receptionists at a hostel in Bolivia. I had made a reservation for a double room and we got to spend 2 nights in twin beds as they messed up the reservation. “My boyfriend just proposed to me and we had to spend 2 nights sleeping separately, do you think that’s any romantic?!“, I said in a frustrated tone. That won us a discount but not a single wish! And the third guy was a random backpacker who said traveling together should be mandatory for couples before they get married. “We’re actually getting married“, we shared with him. “Oh, cool, congrats!“.

So back to my initial point:

Celebrating when you don’t have familiar people around can be a bit tough.

I tried to make Ashray’s birthday special, even if it was just the 2 of us, but everything was a flop! 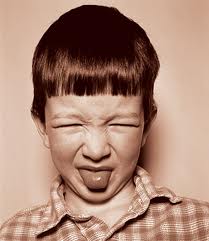 On the 6th during the day, I went up and down the city of Sucre to find a decent cake. EVERYTHING seemed to have dulce de leche (it’s like condensed milk), which he doesn’t like… But finally on my second outing in the afternoon I got these little chocolate and strawberry cakes. As I was coming out of the supermarket where I got the candles a little girl who was begging followed me for a while asking to give her the cake. That was a little bit heart-breaking.

Back at our hotel, I asked the waiter from the restaurant to prepare a nice tray with the cakes, candles and some red wine I had chosen. The idea would be for him to come up to our room at midnight, and surprise Ashray. As we ended up going out for dinner later on, I asked the girl at the reception (who was aware of the plan) to place the tray in our room so that it would be there when we’d arrive. “Sure!”, she said. Yeah, sure…

When we came back, I asked Ashray to turn on the lights to only find there was nothing in the room. So I had to go down to the reception. “Can I have my tray, please?” And the waiter replies “Sure, at midnight, sharp!” NO!! It should have been there already… Anyway, I got the tray myself and Ashray was happy! 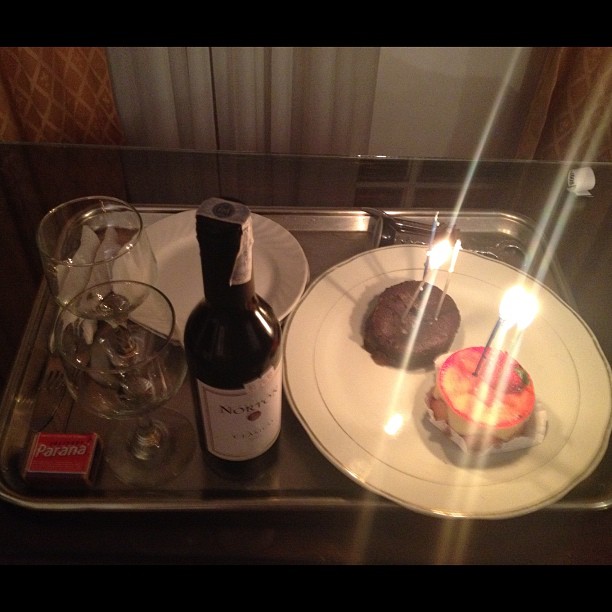 The next day, on the actual birthday, we went for lunch at a fairly fancy restaurant I had made reservations for, El Huerto. In the reservation details they had reassured me they would present him with a tiramisu with a candle by the end of our meal. We had some appetizers, which where good, and then the main dish came. Ashray had ordered “picante de pollo” and he hated it! It looked and tasted like a meal we could have ordered in any regular joint, costing 1/5 of the price. He didn’t eat much, and so we moved on. At least the garden we were sitting at was very pleasant, although oddly filled with white people. “Are we still in Bolivia”, we thought?! I hate going to places where the race ratio is so obviously unbalanced. It is a reminder of how messed up society is out there and you don’t want to be reminded of unpleasant things while trying to have a good time. 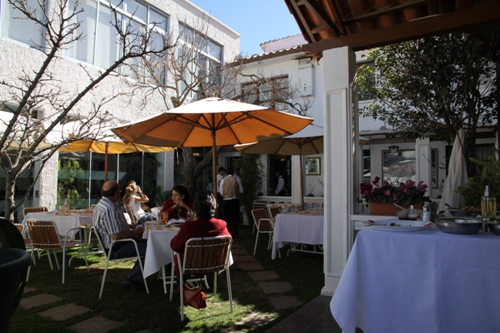 El Huerto: fancy pants on the looks, not on the plate!

After leaving our plates almost full, the waiter who had earlier brought me an extra plate of fries for no apparent reason (they were still untouched) cleared the main plates and brought us the desert menu. “Could you please clear those fries?” – I thought they would bring Ashray’s birthday desert with the fries still sitting there! I didn’t even want the fries to begin with but the waiter had earlier said “No, have them!”. 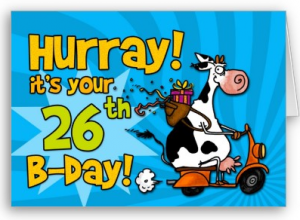 When I thought it was time for desert with candles, I realize that the waiter doesn’t have a clue he’s supposed to bring it! So, as discretely as I could, I told him in Spanish that he was supposed to bring a special desert for the birthday. He went away with a confused face but Ashray had already understood everything (now he knows Spanish!) and we decided to cancel the desert. I told the younger waiter to please tell his colleague to cancel the desert with the candle. “OK” he said, but it wasn’t OK.

A few minutes later the initial waiter shows up with the tiramisu & candle and the other young silly waiter next to him says “it was already prepared!” You want to know the best part of it? The candle was off! What a disaster!… The man placed the tiramisu in front of Ashray with a weird smile. Things became even more awkward when he tried to light a match to put on the candle and didn’t manage to until the 3rd match because of the wind. Later on we realized that the candle was already a bit melted – does this mean they re-use the candles for their guests birthdays? I’m all up for recycling but in this case this deserves a big “what the hell”?! Lesson learnt: fancy places are quite often pretentious bullshit that do not deliver accordingly. Or they deliver half melted stuff. Our bellies haven’t even been good since yesterday. WHAT A FLOP!

They say intentions matter the most, so…