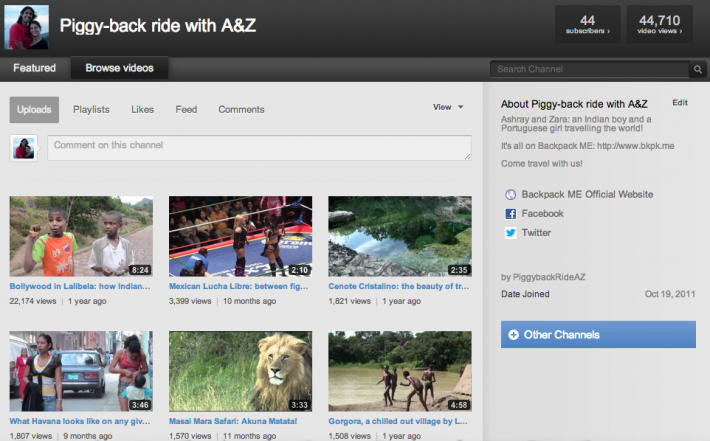 Every year I have this feeling that time went by so fast, that I could have done so much more, that there were so many plans and ideas… and somehow I didn’t fully archieve all I had in mind.

Well, this year was different!

We did so much and I feel like I have seen, done and learnt more than in many of the previous years of my life put together. It’s the beauty of traveling! Check out our travel map to see everywhere we went to during 2012.

Here’s a video collection showing some of the things we did during 2012, across the Americas! And don’t even think of missing the last video if you enjoy surprises!!

I will never get tired of mentioning how much we love Mexico!

When we visited Mexico City in January 2012, we HAD to go for lucha libre, that is the Mexican style fights! This is a sneak peak into the fun we had watching those choreographed punches and slaps!

After Mexico, we decided to travel back in time and went to Cuba! This is what it feels like to roam around this country’s capital, La Habana:

Costa Rica was all about relax and nature. After a week in the beach at the lovely Playa Samara, we joined a short expedition into Corcovado National Park, to observe the local fauna and flora. That’s when we felt in love with SLOOOOTHS!

4. Capoeira in the streets of Sao Paulo, Brazil

Unfortunately, we do not have many videos of Brazil, because during our second week over there, my video camera was stolen! Still, we managed to capture some cool moments on the iPhone. Here is one of those spontaneous things we came across while walking around Republica in Sao Paulo:

When we reached Ecuador, I thought it was time to do a best of video of our travels – this same video was later on sent for an Intrepid Travel competition and we were the 2nd most voted video in the whole wide world. Still, this edit was done with one intention in mind: inspire everyone to travel!

6. A very rustic lunch in Ecuador

After Brazil, Ecuador did feel quite rustic. But you know what? This country was such a surprise! I didn’t know much about Ecuador before we went there and is definitely one of my favorite countries in South America so far! The landscapes are beautiful, unspoiled for the most part, and you get “4 in 1″: Amazon, Andes, coast and colonial cities all in one tiny but amazing country!

Also part of Ecuador, these islands are as unique as it gets when it comes to landscapes and, particularly, wildlife. We got to hang out with sea lions and iguanas, swam in the ocean as sharks, turtles and rays would pass by… it was quite surreal! And we stayed at one of the most picturesque hotels we have had the pleasure to stay at, the Red Mangrove Aventura Lodge in Puerto Ayora. That was THE LIFE!

Chile was the country we spent more time at during our Latin American trip: 3 full months! We only left on the very same day our tourist visas were expiring! There was so much to do in Chile that we could have easily spent more time traveling around the longest country in the world and not see and do it all! This is Chiloe, a beautiful island in the South:

From the frozen Patagonia in the South of Chile, we headed to the other extreme: the Atacama desert in the North, the most arid place on Earth! There, we visited moon like landscapes, swam in freezing lagoons, run free with the vicunas and other local animals and observed geysers explode as the -11C temperature made sure our brains stopped working fluently.

10. Easter Island knows how to shake it!

I still can’t believe we were in Easter Island! It’s as surreal as it gets for us during 2012. Apart from visiting the archeological sites where the famous Moai statues sit,  dig in the chilled out vibes and landscapes, we also got to enjoy a traditional dance show:

And this is what Easter Island looks like, outdoors:

We still have a lot of videos from Peru, Bolivia and the USA in store and we will be sharing them with you soon on our Youtube channel.

In the meantime, we’ll leave you with a brand new edit of the best moments of 2012… and the most romantic proposal EVER! :)

Thanks for piggy-back riding with A&Z!

Cheers to a new year full of exciting trips!