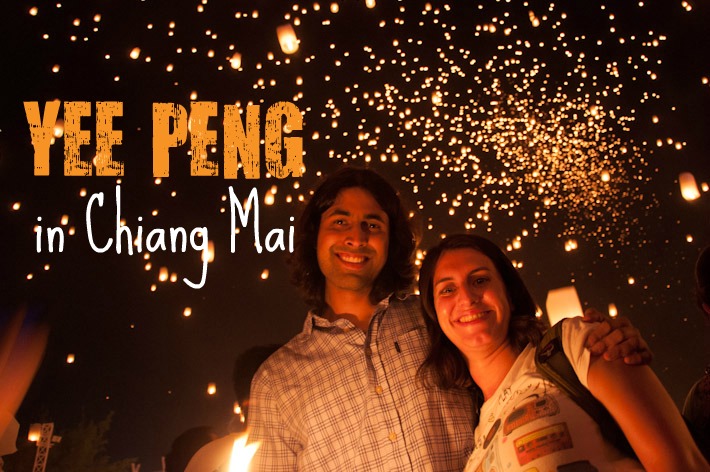 This is the type of festival that makes a trip to the other side of the world worth it! Very hyped up but, in my opinion, totally living to the hype, Yee Peng & Loi Kratong present a Chiang Mai even more exciting than in the rest of the year.

Although often mixed up, specially by tourists, Yi (or Yee) Peng and Loi Krathong are two different festivals.

Loi Krathong (which roughly translates into “to float a basket”) is a Buddhist festival and its date varies according to the Thai lunar calendar. On this day, Thai people build krathongs (little floating altars with flowers and candles) that they let go with the river flow, to symbolically pay respect to Lord Buddha. This is also a way of “cleaning” the sins of the previous year and move on with a clear slate, by letting your problems and worries get washed away.

Loi Krathong coincides with the date of Yee Peng, a different festival from the Lanna tradition of Northern Thailand. This is the reason why in Chiang Mai (the former capital of the ancient Lanna Kingdom) both are celebrated on the same days and so often mistaken.

During Yee Peng, crowds of devotees and visitors release thousands and thousands of lanterns into the sky, also as an offering to Lord Buddha. When this happens simultaneously, the visual effect is as stunning as this:

Unless you can Google in Thai language, you won’t be able to find a lot of info regarding the Yi Peng festivities in Chiang Mai, commonly referred to as “The Festival of Lights” or “Lantern Festival” by foreigners.

The release of lanterns happens all over the city as soon as the night comes down on the Yee Peng date and even on the days around it. But there are areas where everyone concentrates on the main day, to release the lanterns simultaneously.

Mae Jo University in the outskirts of  Chiang Mai (about 15 minutes by car/bike, without traffic) hosts 2 different Yee Peng festivals: a commercial one aimed at international tourists and “the real deal”, where locals and visitors mingle. Tickets for the international version of Yee Peng cost around USD100 and it tends to sell out with a lot of time in advance. This year, it will happen in the beginning of November.

On this article, we focus on the real Yee Peng, which we attended in 2013. Free, with incredible vibes and those rare opportunities to hang out a little with Thai families in the friendliest of atmospheres… against a mesmerizing lit up background!

Things you should know about Yee Peng in Chiang Mai:

- Book your accommodation in Chiang Mai with as much time in advance as possible. Everything fills up and prices go bananas!

- You should arrive to the Lanna Duthanka Buddhist Center in Mae Jo University early to get a good spot. Although the praying ceremony and lanterns release will only happen in the evening, the place gets incredibly crowded. 4pm onwards would be a good time.

- If you indeed arrive early, there will be a lot of waiting time under the sun. Bring some sun block, food and drinks. You wouldn’t want to move from the spot you came so early to guarantee! Crowds waiting for the Yee Peng evening to start

- Traffic around the area is absolutely crazy. Even on a small bike, we were stuck on traffic on the way out. Avoid bringing your car. There is shared public transportation available. If not, mopeds are still preferred (you can hire them in town, for the equivalent of USD5/USD7 a day).

- There are songthaews (covered pick up trucks used as shared taxis) departing from Warorot Market in Chiang Mai to the event. To find your way back, make sure you agree with the driver on a spot and time to be picked up.

- There are lanterns being sold before the entrance to the venue. Those are indeed cheaper than inside, but you will not be able to carry them inside with you. For the sake of security standards, the organizers sell their own lanterns inside the venue. Those will only be white in color (made with rice paper) and with natural materials. We didn’t know this… so we had actually bought some lanterns outside. We then decided to hide them amongst the bushes and they were still there by the time we came out… YAY, more fun for the next days!! Everybody likes posing with their lanterns before the release - At Mae Jo, lanterns usually cost 100 Baht, that is the equivalent to USD3.

- Keep in mind that this is a religious event. Be quiet during the prayers prior to the lanterns release (they last for about one hour) and dress appropriately too. There is a team of people checking out your clothes by the entrance, so skip shorts and uncovered shoulders. Traditionally, people dress in white color. During the bilingual ceremony, you’ll be asked to meditate on your good actions from the past year. So I hope you have a lot of material… A space dedicated to Lord Buddha

- You don’t have to have a lantern per person. One per couple or group of friends works well. They are really big and not that easy to lit up, so you need more than 2 hands to do the job. Be ready… as everyone is meant to release the lanterns simultaneously (although some people don’t…)! - Don’t forget to write down your messages and wishes on the lantern before you launch it… it is supposed to bring you good luck! People write their messages and wishes on their lanterns

- The place will look absolutely photogenic. But take your time to release the lantern and soak the beautiful atmosphere in. There will be subsequent lanterns being released and you will have plenty of photo opportunities without having to miss out on living the moment – after all, that’s what you are here for!! Getting ready to release the Yee Peng lanterns - If you don’t like crowds, skip Mae Jo and head to Chiang Mai’s city center. Lanterns keep on being released over there as well by many people and, in the distance, you can see how the sky lights up as the lanterns at Mae Jo university get released (seen best from the Nawarat Bridge above the Ping River).

- In town, a basic lantern will cost the equivalent to a USD1 or less. But you can get a little more creative and buy lanterns with funny shapes too. I chose Doraemon, because I figured a cosmic cat would know how to fly high into the sky as no Angry Bird could ever do! - Avoid lanterns with firecrackers (or firecrackers all together). They are really not fun and safe in the middle of such big crowds. So what about Loi Krathong?

The main day for Loi Krathong is on the day after Yee Peng. There are activities happening all over town, at all times of the day: parades, exhibitions, lantern contests and religious events. But at night, Loi Krathong fills Chiang Mai with a wonderful atmosphere once again, as families get close to the river to allow their krathongs to float away… Although traditionally built with banana leafs, some krathongs are being sold with styrofoam these days. Considering they’ll end up somewhere in the river, these should be avoided 100%. Build or buy krathongs with bio-degradable materials only. In good Thai fashion, the serene krathongs release (which does not happen simultaneously, unlike the lanterns on Yee Peng) is taken to the next level with music, games, foods and drinks. There’s a happening party atmosphere all over town. But if you prefer a more peaceful scene, head to any wat (temple) where special lights make the buildings look even prettier. Crowds celebrating Loi Krathong by the riverside in Chiang Mai Fun and games during Loi Krathong More info about the 2014 edition of Yee Peng festival can be found here.

This is one of the most beautiful festivals we have ever attended.

We hope you make it to Chiang Mai for Yee Peng and Loi Krathong one day too!