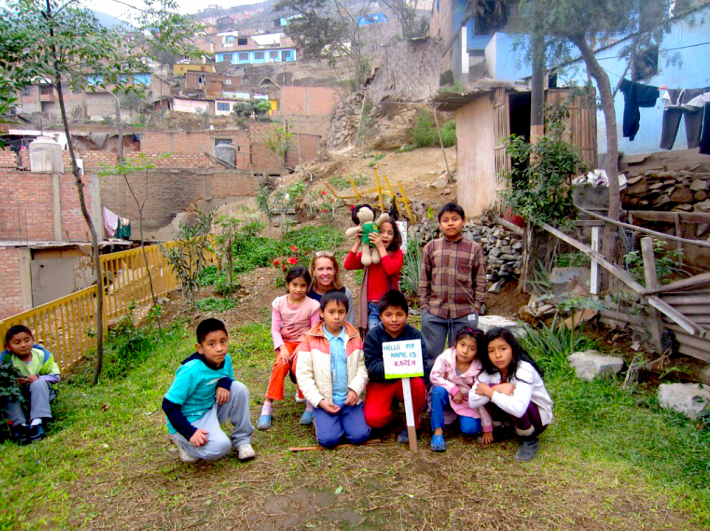 October 30, 2012 /Posted in Around the World in 80 Posts, Latin America, Peru /By Karen Niedermeyer

During my visit to the shanty town of Comas, in Lima, I felt that any moment my heart would burst.

I constantly had a lump in my throat from the moment I stepped out of the taxi to meet a bunch of cheerful, excited youngsters aged 4 – 11, eager to take me on a tour of their own personal little gardens.  I had come to see an example of Tierra de Niños in action and the experience was very moving.

It was my first time in a shanty town.

Having viewed them from afar in awe of the precarious way the houses were stacked into the mountain side, wedged in the dry dusty desert landscape. 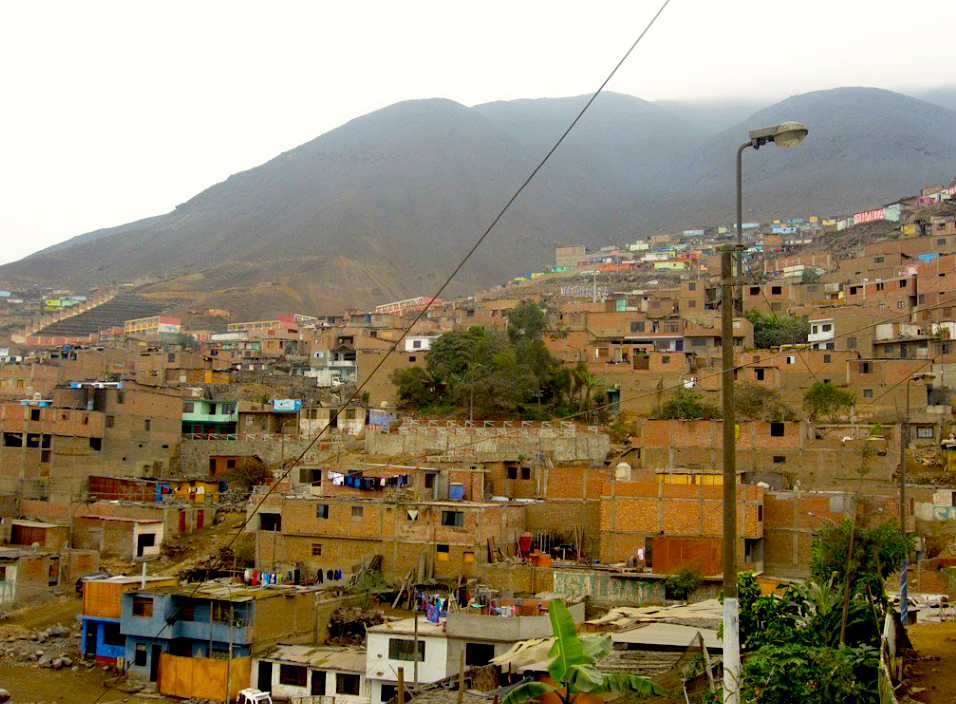 Comas began as a pueblos jóvenes (meaning “new town” – the name given to the shanty towns around Lima) in the 1950s when many people came to Lima from the highlands, in search of work. It was one of the densest areas of Lima with 10000 persons per km², and used to be one of the poorest, however in the last decade its economy and infrastructure has improved. I had read of ANIA’s Tierra de Niños projects in the jungle, but I was particularly keen to see it in action in a city setting. 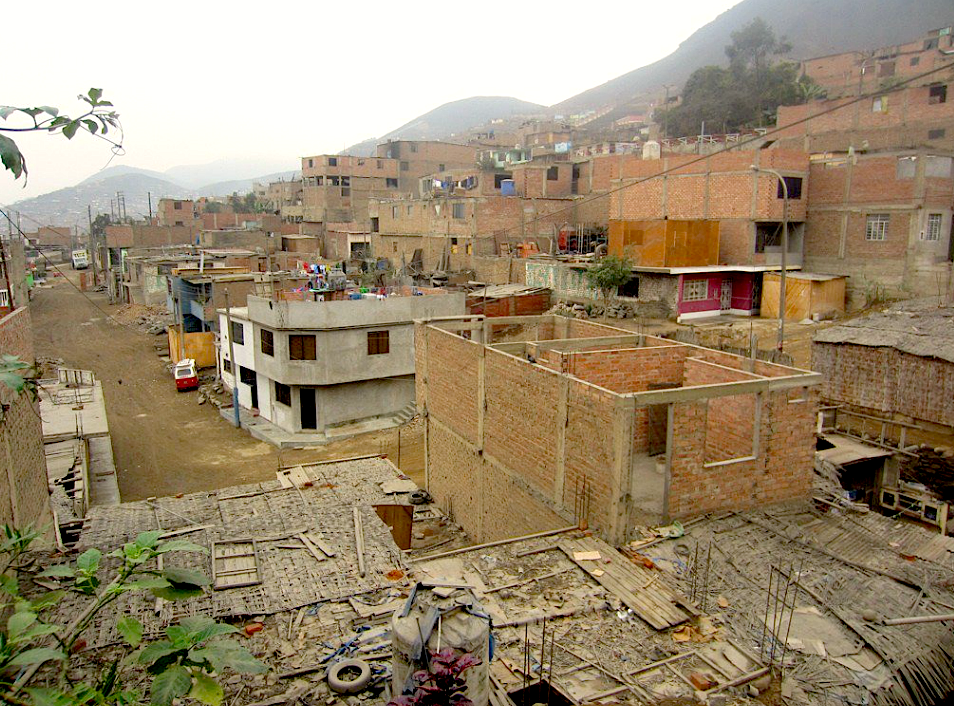 Another view of Comas

The children led me between their houses, some looking very temporary and others more substantial, to small patches of green, bravely defying the dusty environment.  Each patch had a hand painted coloured sign, naming the garden, sometimes with a title and sometimes simply the name of its owner. 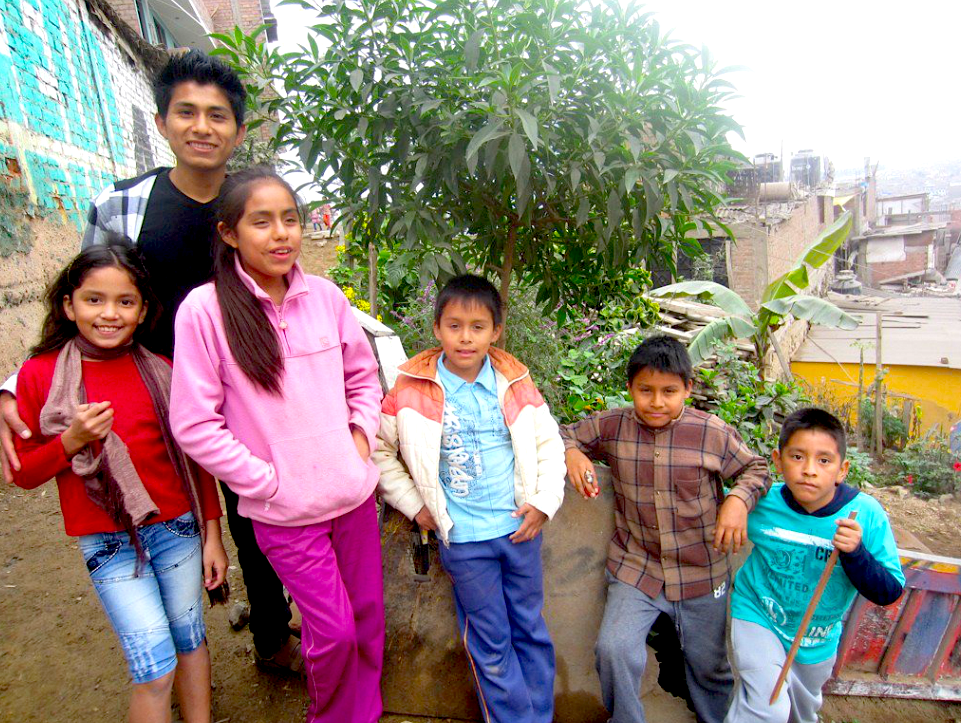 Roger and the children of the community 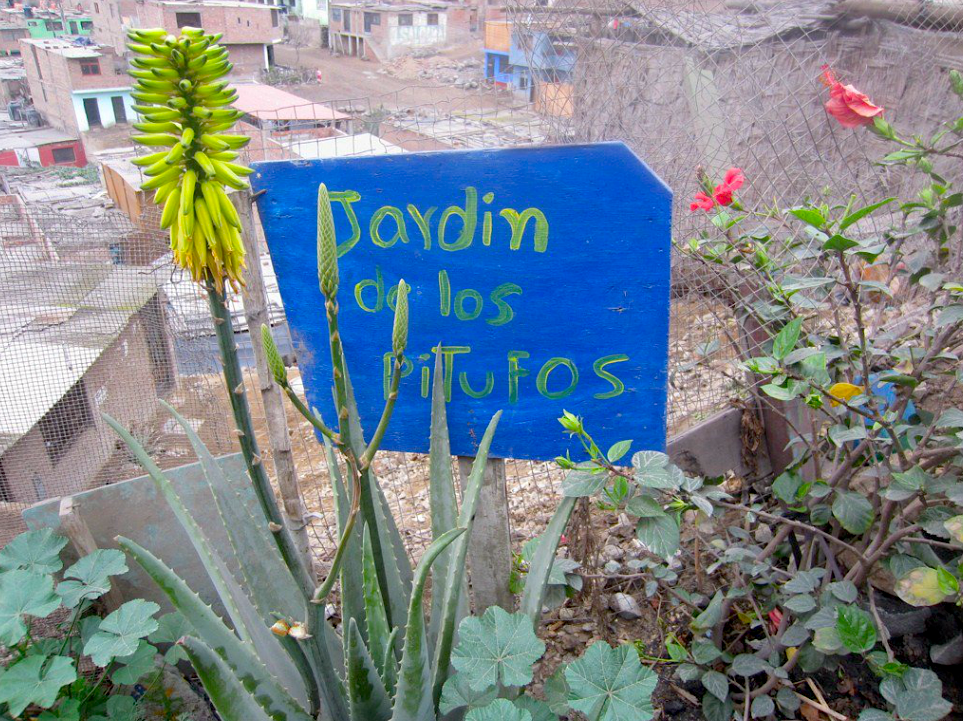 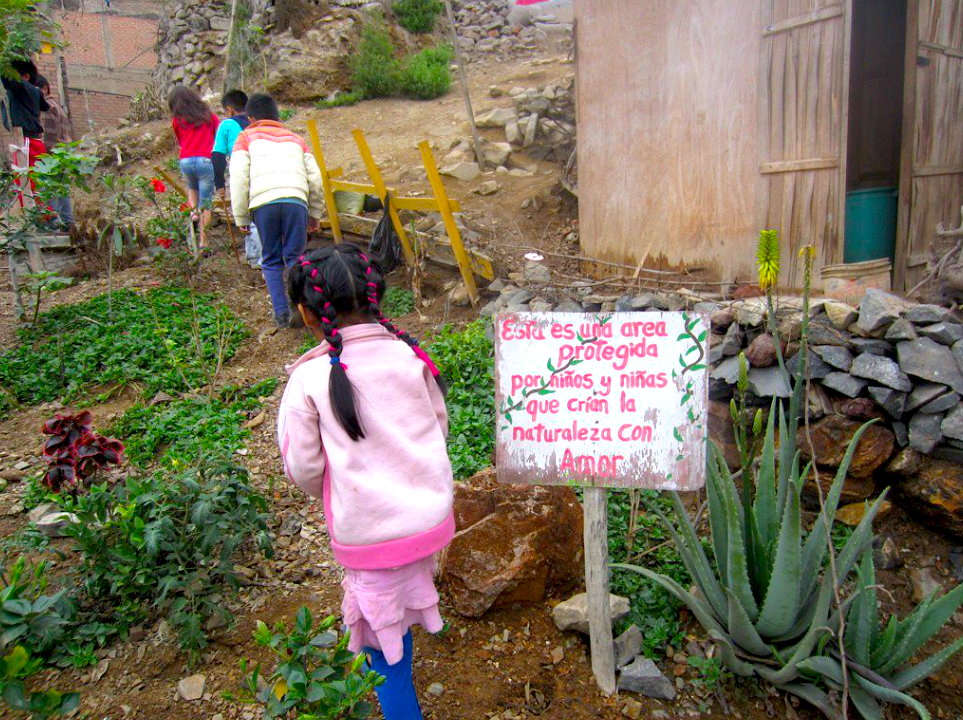 The board reads: "this is a protected area by boys and girls that create nature with love" 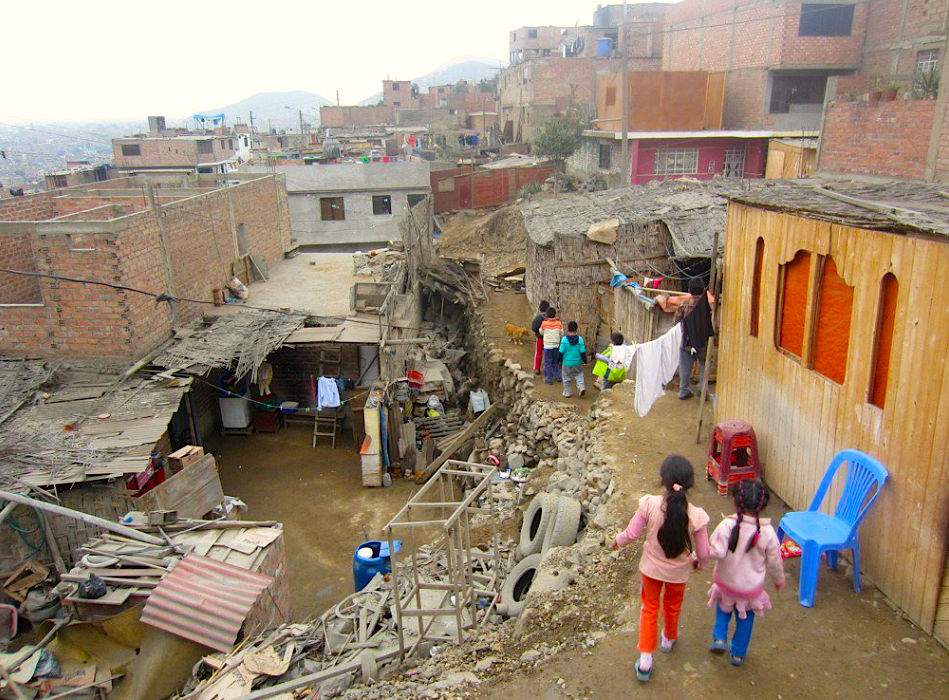 Children walking between their houses

I was led to a more substantial patch with a fence made out of odd bits of wood surrounding an assortment of vegetable and herb plants. This was the work of a young girl who was busy painting a rainbow sign when we approached.  Here she is introducing herself and showing me her two gardens:

Another young boy was particularly proud of his garden and took care to explain each plant to me. His garden was built on a steep slope between two paths, amongst a wood pile. He had his own compost pile and had made his own fence.  The learning experiences these children are gaining is obvious – a link to their land and in such a tough and harsh environment, the care they need to put into nurturing their gardens is quite remarkable.

Joaquin Leguia, the founder of ANIA, had put me in a taxi and sent me on the 45 minute journey to Comas. ANIA is an NGO based in Lima with the mission “to empower children and young people to nurture and protect the Earth and become responsible and caring citizens though their active participation in improving their environment.” The ideals behind its project: Tierra de Niños (TiNi) is to officially grant children at least ½ square metre of land (or 3 plants) for them to manage. On their land they need to plant for themselves, for others and for the environment. This might be an interesting plant for themselves, herbs or vegetables for their family and native pollinators for the environment for bees, birds and butterflies.

This concept now exists in USA, Nepal, India, Canada, Costa Rica, Chile, Brazil, Colombia but originated in Peru. Joaquin’s aim is to have 1% of the land in Peru to be officially owned by the children.

When I arrived in Comas, I was met by Roger, an industrious 19 year old who had been inspired by the ideas of TiNi when hearing a talk at his school. He decided to inspire the children in his own community. Here he is showing me his own garden, complete with the before and after photos and explaining how he came to hear of TiNi.

Not all the children are lucky enough to have a space of ground. Here Roger takes me to meet a little girl who has made her garden on a balcony.

Finally the children lead me to their ANIA house: a place where they meet and plan.  They had made a sign with my name, although I was still to find out the true purpose of this sign! 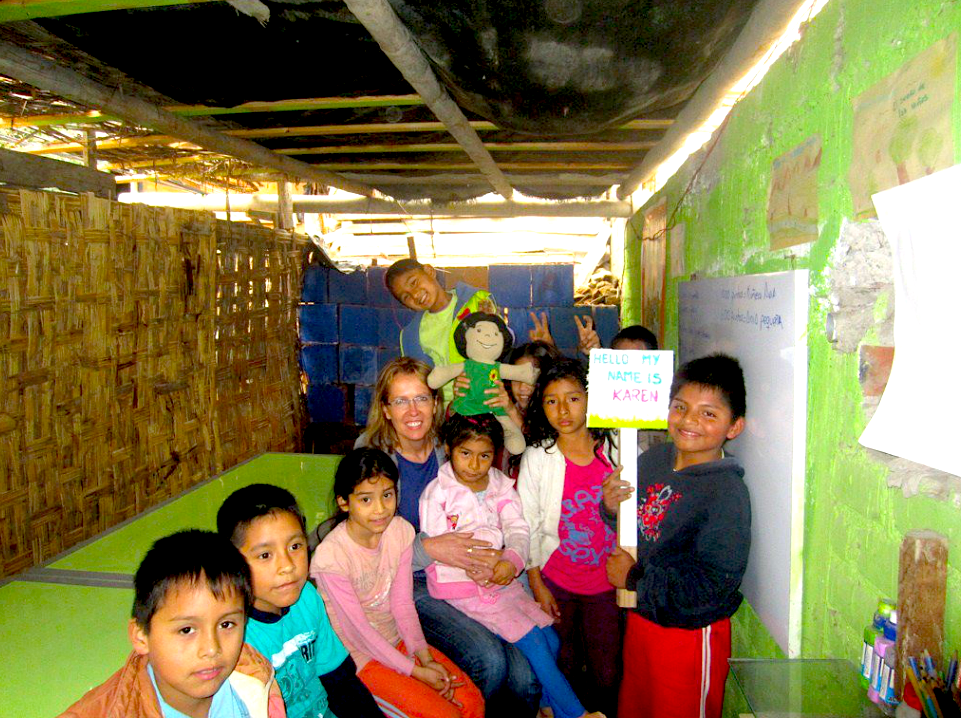 Karen and the kids at the ANIA House

After lots of photo taking, the kids led me off to another place where a real surprise awaited me.

They asked me to plant a tree!

I first met Joaquin in his office in Barranco and our initial conversation was frantic with excitement as he oozed enthusiasm over his dream. His office in itself was a gemfield of little details and points of interest that radiated his ideas.  He showed me a money box that explains the whole concept. A money box in three parts: for myself, for others and for the environment.  This simple concept highlights the need to make our environment, our planet, the centre of our importance  - for we are what we do to our planet. Joaquin is one of those rare inspirational individuals who carved his own path, against the grain of expectations that weighed heavily on him as the grandson of a Peruvian president. 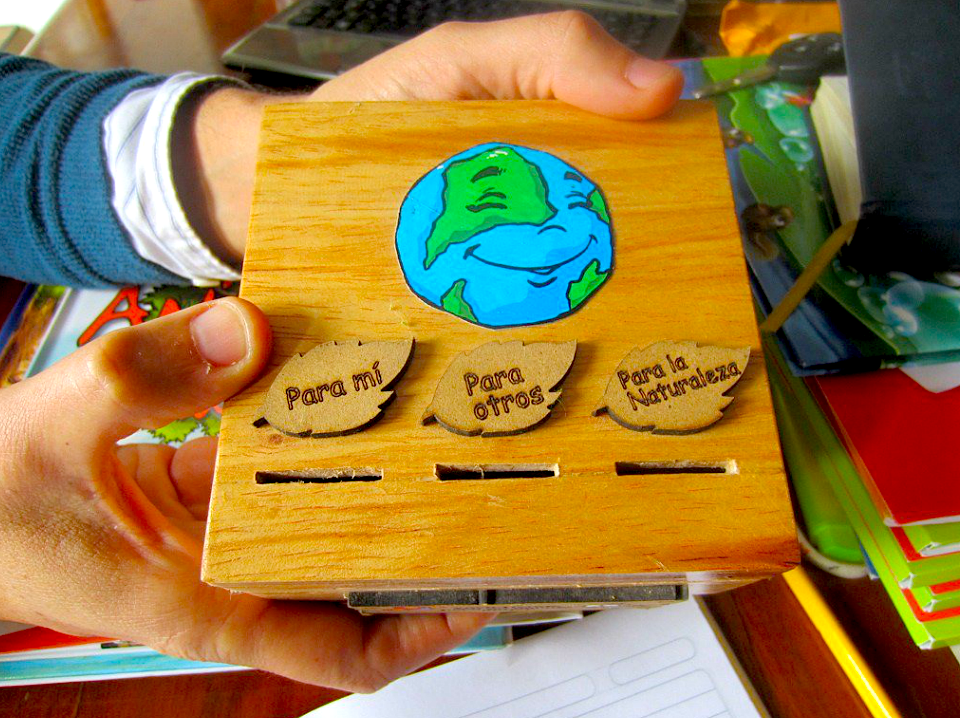 For me. For others. For nature.

Joaquin took me to see an ANIA house built in the grounds of the oldest museum in South America. The house is made of all natural materials and features a herb garden, ornamental garden, vegetables, fruit and pollinating plants.  It will have a series of signs to explain the concepts. In the very short time we were there, the house attracted much attention from visitors. 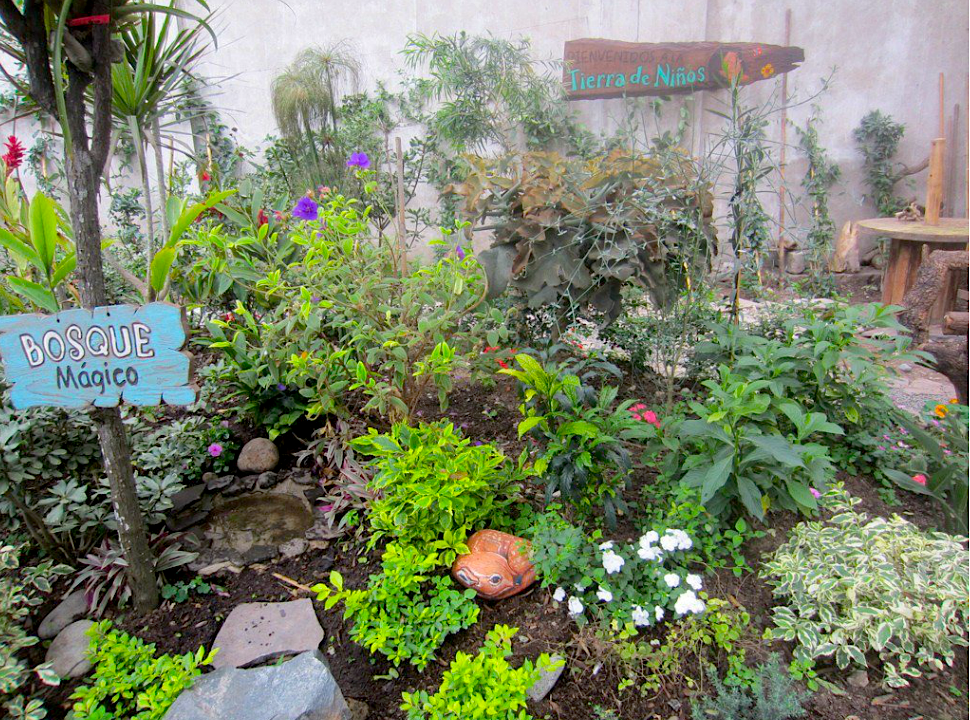 Garden by the ANIA house

KAREN NIEDERMEYER is a music teacher at United World College of South East Asia in Singapore.  She has taken a year’s unpaid leave to explore the world and visit schools to learn about and observe their service learning, which is her passion. Karen is originally from Australia. You can read more about her sabbatical year at kazjaz.com

Do you want to share your travel & volunteering story here on Backpack ME?