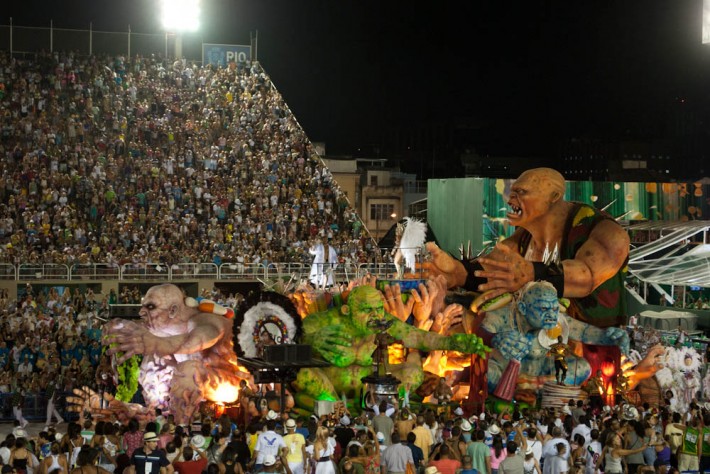 Something really interesting happened over the last week at The Lonely Planet’s Thorn Tree forum. Zara posted up her article about what happened in the Salvador Carnival and obviously this caused a serious thread-brawl.

The thread has so far reached some interesting conclusions including the behavior of high caste Indians, yes, you read that right – imagine the derailment. However, some of our previous conclusions regarding the social acceptance of violence in Brazilian society have been reinforced by the thread.

It started with Zara making a post about how she had a bad experience in the Salvador Carnival (our video camera was stolen) and we were beaten up pretty bad… Apparently, an interesting hidden gem that the Thorn Tree forum sports is the “blame the victim” feature.

At first they resorted to calling Zara “whiney” – basically saying that it was all her fault and to get over it. When we brought up the fact that it wasn’t as much the crime, but what happened afterwards (police apathy, people not helping us, hospitals not caring, etc.) – apparently all that was our fault too.

Brazilian society is wonderful and the people here are truly nice. It’s just that we happened to bump into a lot of bad apples in our first week here. Yes, and you guessed it, that was our fault too! Looks like other people feel like us too but can’t really voice their opinions at the Thorn Tree Brazil forum.

Furthermore, the members at Lonely Planet decided to pick on some details of our posts and generalize them, then blamed us for generalizing, and continued down their path of blatant hypocrisy. Here’s where it all started:

Where it all started..

We were obviously discussing the events that took place in Salvador. How people read this information was quite interesting, basically they decided to read it as “all Brazilians are assholes” and here is the progression of what happened after this. Read on to see what happened and how I even tried to clarify the situation with the wonderful Thorn Tree Brazil community.

I even tried to rescue the situation and clarify it a bit but I should’ve known that any kind of reasonable discussion is impossible in the midst of all these nut cases.

Me trying to reason with crazy people

Well obviously the above post had no effect at all. No one cared and just continued down whatever crazy path suited their fancy.

Well, at least this guy is wondering..

This one's a keeper!

The discussion slowly unraveled. There were some people who offered some interesting insights, but even those weren’t without the usual “you guys are racists” overtones.

We are racists! It's official!

There were some other posts with all these interesting overtones as well.

Apparently offerings were in order and the Lonely Planet forum members stepped in to enlighten and enrich our lives.

We have seen the light!

Since I had mentioned that I am from India – the discussion obviously HAD to go there. Since many members tried to say “Oh with so much poverty you can expect a lot of violent crime” I decided to chime in with “We have more poverty in India, but less violent crime in many places” (it’s probably because we don’t have a huge drug problem, but we have other stuff for sure..). My point was not to say that India is better than Brazil or some inane shit like that. All I was trying to say was that poverty is not the only factor at play here.

However, I wasn’t prepared for what would be a very strange accusation.

You and other high caste Indians pee and shit on the floor and then make people clean it up for you. Even in restaurants. My friend Ayush, shits on the floor and makes the maid clean up, I'm serious!

This was after some other people had said Indians are rude, lack compassion, lack sensitivity, etc. all while we were still being accused of making generalizations. There’s a wonderful word for this in the english language, it’s HYPOCRISY.

This person also went on to ask why we expected free treatment when in fact I have repeatedly mentioned in the thread that we were willing to PAY for treatment. We just didn’t have $3000 to deposit with us at the time.

The quality of discussion is pretty obvious from this wonderful little tid bit, this was after I mentioned that we tried in 4-5 different places and didn’t get any help. Apparently the lady  who pointed out the first aid hut to us was very courteous. If you read our previous post you’ll see that while Dushyant was still bleeding profusely, she actually stopped us to ask us for our nationalities for her statistics. I should’ve been more grateful.

About the lady who pointed at the medicare booth, after we walked around for over 2kms

There were also some other very interesting conclusions that can be found in people’s attitudes and responses.

There were a number of opinions aligned with this. This happened both on Lonely Planet and reddit. Maybe I have the wrong idea about what the police is supposed to do but I think I can safely attribute that to my “lack of exposure”.

- 26 homicides in a week in city of 3.4 million people is normal

There were 26 homicides in Salvador during Carnival. While this might be a low number compared to the city’s usual stats, it was shocking that people in Lonely Planet defended the number and said that it’s normal.

Look, we’re not trying to criticize Brazilian society here. I know that our own countries, and the entire world, has several problems. But the point that Zara tried to make earlier was that people are quite de-sensitized to this kind of thing, the same way as people in India are greatly de-sensitized to deaths (civilian or military) in terrorism prone areas. Obviously, this is not to say that everyone would react the same way – but on that night, people did react that way.

A lot of the discussion on the thread only served to reinforce that point, including how it’s okay for people to look at someone who is bleeding profusely and react with “meh! whatever”. Which brings me to my next point..

- A nosebleed with a deep cut is not a serious injury and a hospital shouldn’t give you the time of day unless you deposit money with them first.

Dushyant was quite obviously bleeding for a while by the time we got the hospital (and showed no signs of stopping). However, the guy at the ER just wanted USD 3000 from us first before even taking a look. Zara even asked him for some cotton or toilet paper so that we could stick it to Dushy’s face – at least to stop him from bleeding all over the ER floor. No dice. He just looked at us blankly and said “go somewhere else”.

On the forums, members almost unanimously voted that a nosebleed is not important and that we shouldn’t be shocked at the lack of any attention from anybody. Well, I’ll attribute this to my “lack of exposure” as well because if someone appeared in front of me bleeding profusely, I would definitely try to help them out in any way possible.

In-fact, it was repeatedly emphasized that we shouldn’t be so shocked that no one reacted to a deep cut in the nose that was bleeding profusely. According to Thorn Tree Brazil, if you look like this, you'll fit right in!

Lady who pointed out the first-aid center. Received an award for exceptional public service, and moved to Beverly Hills!

First things first. The nurse there didn’t really do a great job. The moment we walked out of the place Dushyant’s nose opened up and he started bleeding again. We had to go back again to get her to do it properly.

Other than that, yes we are grateful that they did what they did. However, there was definitely a “this is fairly normal” attitude around right from when the event took place and that was really the problem. When does this kind of stuff become “normal” ? And if it does, when does that become “okay” ?

But to go on and say that just because they did what could only be conceived as their job, we should forget about the 4-5 groups of people before who refused to be of any help. Well, that’s kind of a stretch.

- If you’re Portuguese you better not have an opinion (or at least, not a negative one) about Brazil

Lets just be clear here. We came here with great expectations and while our initial days were disappointing there is no doubt that Brazil is a beautiful, wonderful, and diverse country. Following what happened in Salvador and Rio, we had a wonderful experience. However, a repeated theme in the Lonely Planet thread suggested that Zara couldn’t honestly voice her opinions about our experience in Salvador.

By that same logic, we should ban Slumdog Millionaire and never hear of it again! (Why should a British person be allowed to make a rather critical, though excellent, movie about the slums in Mumbai ?)

There are a number of posts in the thread which suggest that Zara has a distorted perspective of Brazilian society (and even the world in general) because she happens to be Portuguese.

Something that the entire discussion missed is that the reason we take our camera to places is so that we can share our experiences with you. Yes, it was a risk and we knew that, we knew we could lose it. However, the fact that such a thing happens, or the general apathy of people around you when it happens cannot be justified.

The folks over at The Thorn Tree’s Brazil branch also suffer from something known as “I know it all” disease. In fact, this condition is so acutely presented in a lot of people there that there are actually rules against it! This becomes blatantly obvious from the language that people use in their posts “do not inflict yourself upon the Brazilian people again”, “if you don’t like South America, don’t come here”, “you do not deserve these wonderful people”, “you lack exposure”, “I am far more capable than you or your friends”, and much more!

In the Brazil branch of Thorn Tree:

If anything bad ever happens to you:

If people don’t help you out, it’s because:

If you write about it:

If you try to discuss it:

People in your country shit on the floor in restaurants, just so that other people can clean it up.

[The original thread at the Thorn Tree Forums has been removed in the meantime. Oh, such fun has gone away!..]