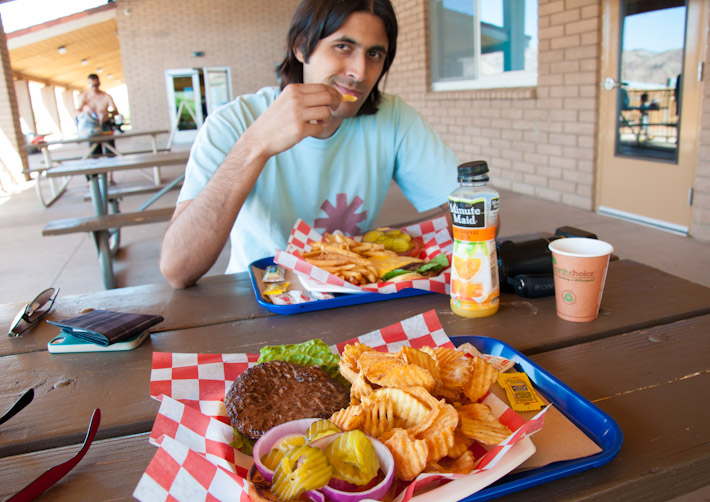 The USA in my mouth!

I’d be lying if I said I had great expectations regarding the food side of things during our USA trip. Call it prejudice, call it awareness, I had a feeling the USA favors quantity over quality.

We were sitting in a plane to Las Vegas and about to take off when I noticed a lady across the aisle whose size didn’t allow her to buckle the security belt. As the air hostess came by to check if everyone was ready for take-off, this lady covered her belly with a jacket, pretending she was cold, hiding that she wasn’t indeed secured by the belt. As soon as we took off, she opened a bag of potato chips and munched during the entire flight. I wondered if she was sad because she was obese and was perhaps seeking comfort in food, or if she needed to seek comfort in something to begin with because of food itself.

I see food as a source not only of nutrition but also of great pleasure. But my observation is that people in the USA (and yes, this is a generalization – I am talking about the masses) are not eating that well.

Portions are ridiculously big (and still a big part of it goes to waste), people eat way too much protein (our nails were growing faster than anywhere else we’ve ever been too!), and the fact that most of the protein is from animal origin not only is unhealthy, is also environmentally unsustainable. If food sustainability is a subject of your interest, I recommend reading the book Diet for a Small Planet 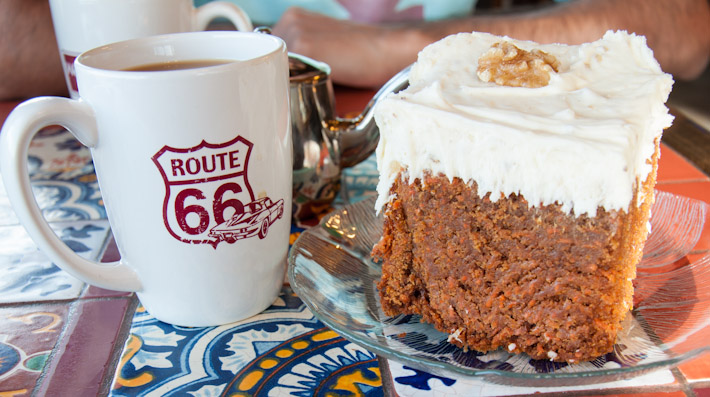 Check out this MASSIVE slice of cake! No wonder Starbucks calls their smaller cup size "tall". It's a fact!

At times, during our days in the USA, I felt like this is a country that has thrived to improve the quality of life of its citizens, to become technologically advanced, priding itself in influencing the whole world and being ahead of the curve, while forgetting how to do well one of the most basic things humans have to do everyday: EAT! Parts of my brain cannot conceive that individuals can be so smart for certain subjects, while eating so bad. It’s like some basic sort of intelligence is missing. Fresh berries straight from the farm in the California country-side

Economics play a huge role in the way people eat. Not only fast food is convenient, it is also cheap. If you go to the supermarket, trashy foods are way cheaper than good wholesome ingredients. For the price of 2 organic apples I could perhaps take half a dozen of donuts, which are also more filling. For the price of a nice salad at a diner I can have 2 meals at some burger joint. It is no coincidence that the cheaper the restaurant, the more ethnical variety you’ll encounter inside. As places get more expensive, the ratio of white people (as customers) also grows. So much for the land of dreams and opportunity – even at this basic level you can observe that racial differences still influence, so clearly, the socio-economic reality in the USA. 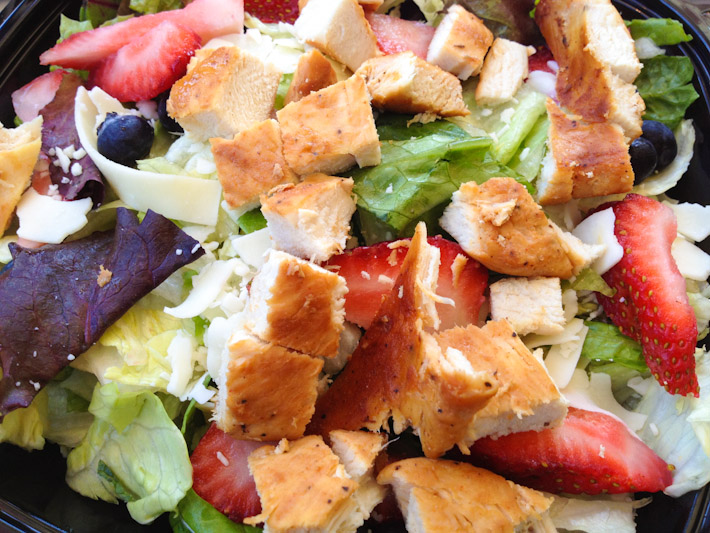 Wendy's summer berry salad. One of the most decent fast food options we came across in the US (skip the dressing), apart from our regular Subway. For $6.49

Food corporations are a major deal in the world, and the USA is one of the biggest players in this messed-up game that consists in making money feeding the world’s population. Most food brands operate under the same umbrella, dominating the market, feeding individuals things that they don’t even realize they eat. While all of this happens, most people do not even spare some time to think about it, to read their food label, those endless ingredients lists, and to understand the source of what their body and particularly their children’s growing bodies is going to ultimately be made of. 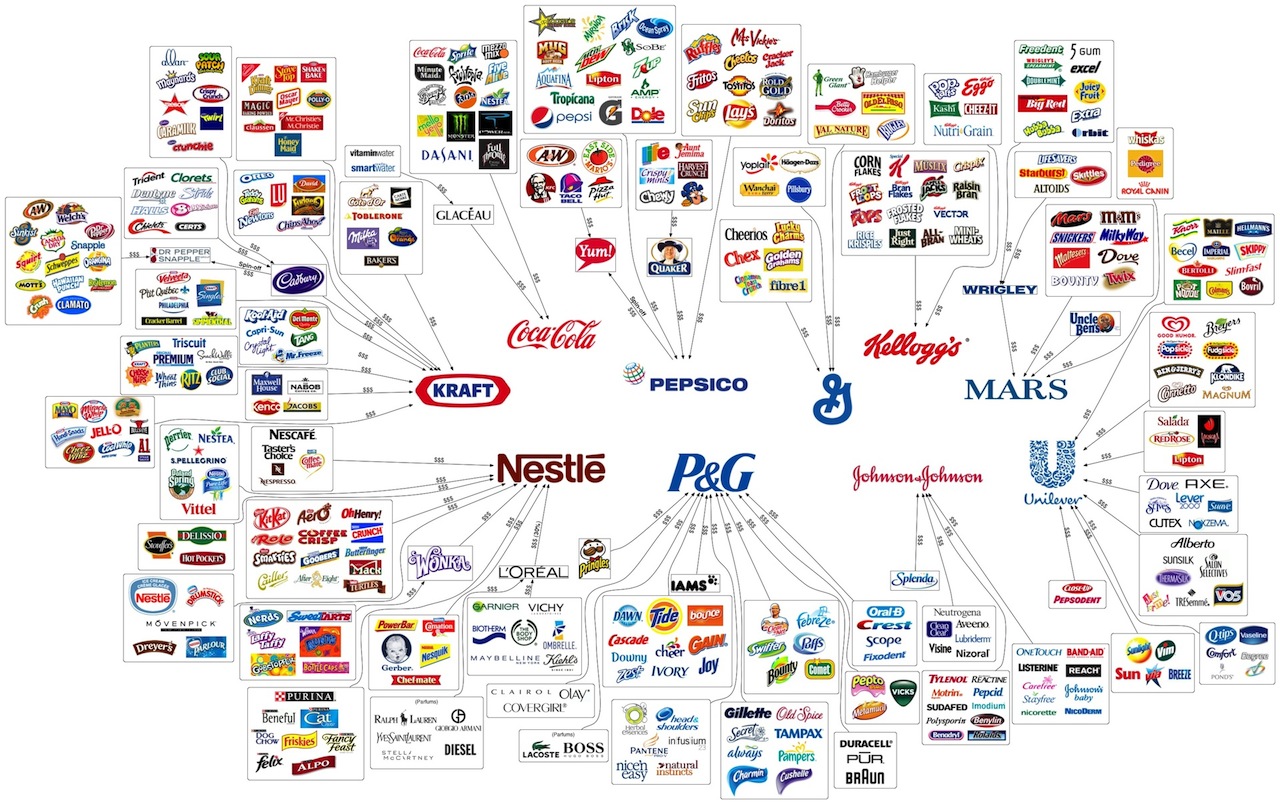 Map of Food Corporations. Click to Zoom In an see the details.

Processed food is almost synonymous with food. Microwaving is the new cooking. Meals are something you “get outside”, not make at home. High fructose corn syrup has made sugar gone old-fashioned. Artificial soft drinks have replaced good ‘ol water. And a Happy Meal, when consumed so regularly, has a really sad after-taste. 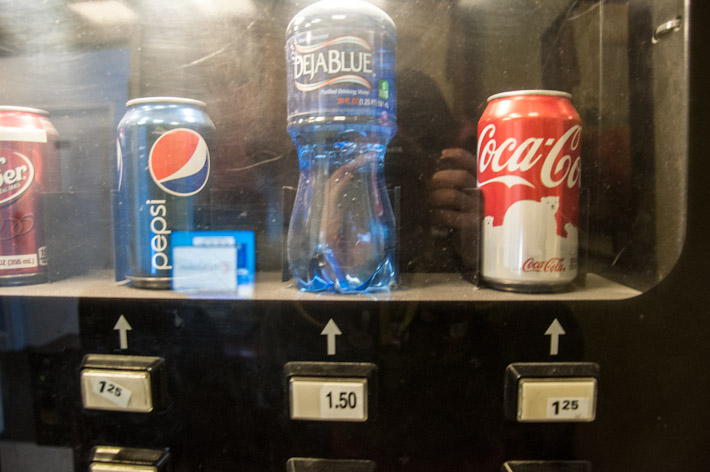 In some families, it’s come to the point that if you ask your kids something like “what do you want to eat?“, they’ll reply “I want XYZ” – replace XYZ with any fast food restaurant name, instead of an actual food item.

If you do not eat well when you’re a single person, at least take some things into consideration when you’re feeding your kids. We need to understand what’s in our food! People say they’d do anything for their kids, and I think cooking them wholesome food should be on top of the list of things you’d do for those you put into this world.

And NO, pizza is NOT a vegetable! And milk doesn’t come from the supermarket, it comes from cows. And ingredients do not come from a box or factory… they come from the land! And a meal without meat, it’s still a meal and YES, it can still be loaded with protein. 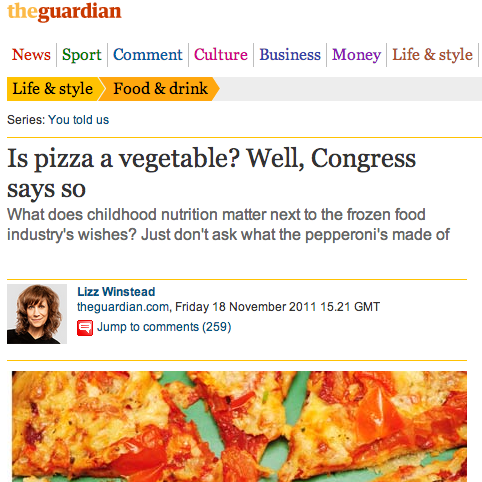 News when Congress said pizza is a vegetable. Read on: http://bit.ly/18Masy5

Sometimes food is all about convenience, something you just have to get done. But if food becomes just fuel then we’re going to become just cars. 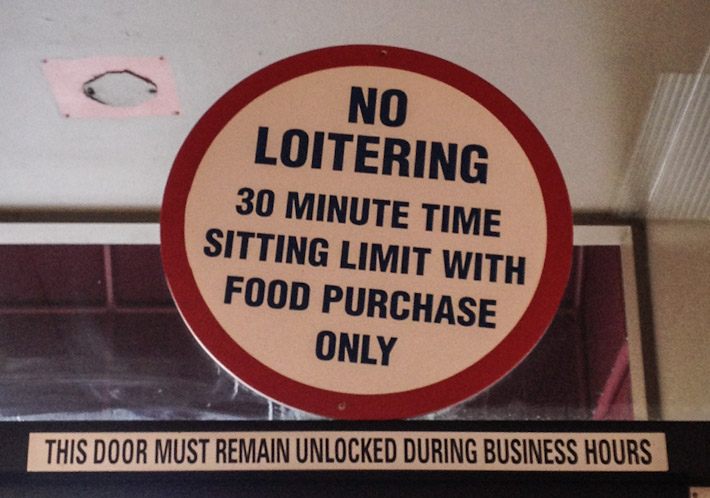 Certain diners and cafes do not allow you to sit inside for more than 30 minutes. This sign is fairly common.

In the USA, fast food chains and even medium scale restaurants commonly serve in disposable plates and paper boxes. If we were to ask in the streets “when was the last time you ate with real cutlery?” I am sure some people would have to think hard, as plastic utensils are in the order of the day. I haven’t seen this at this level anywhere else we’ve been to. And It’s almost disrespectful for the food you eat! No wonder meal-times now-a-days take place in front of computer screens or TVs, instead of facing your family, friends or colleagues. 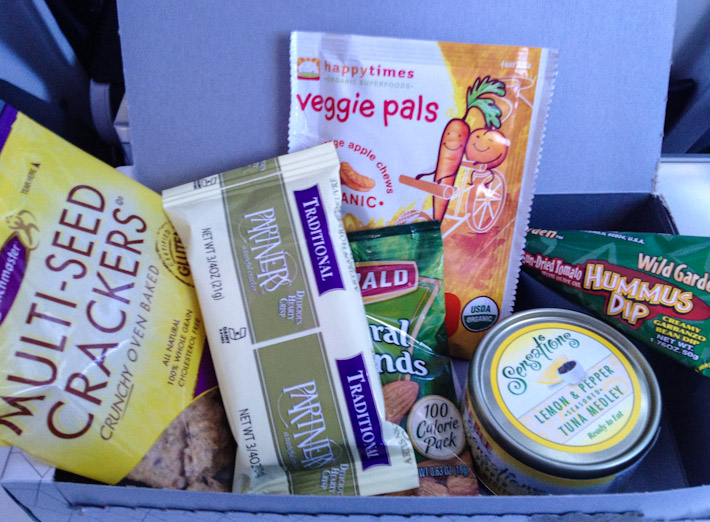 Airline meal. There's as much packaging as there is food in here! 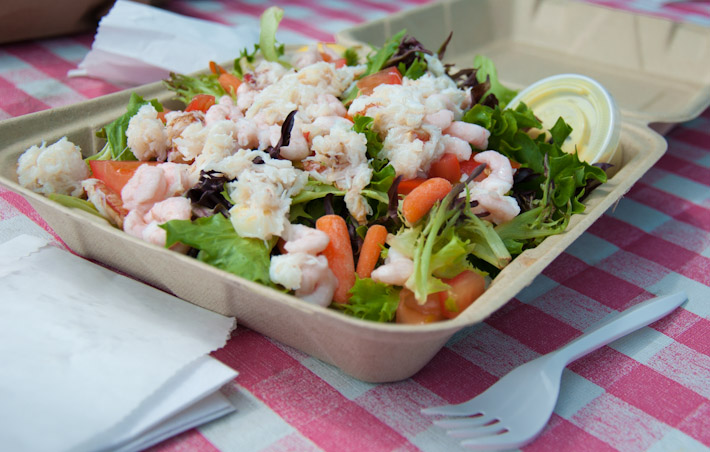 A $13 seafood salad in Oregon: in a paper box with plastic cutlery

Conversing with residents I was once mentioning “you guys waste so much paper and plastic with food!” to what I got a reply saying “but most materials are recycled“. Even if things are recycled, people tend to forget that materials are not 100% recovered and recycling itself is not a 0% emission process either. Still, convenience seems to be top priority. 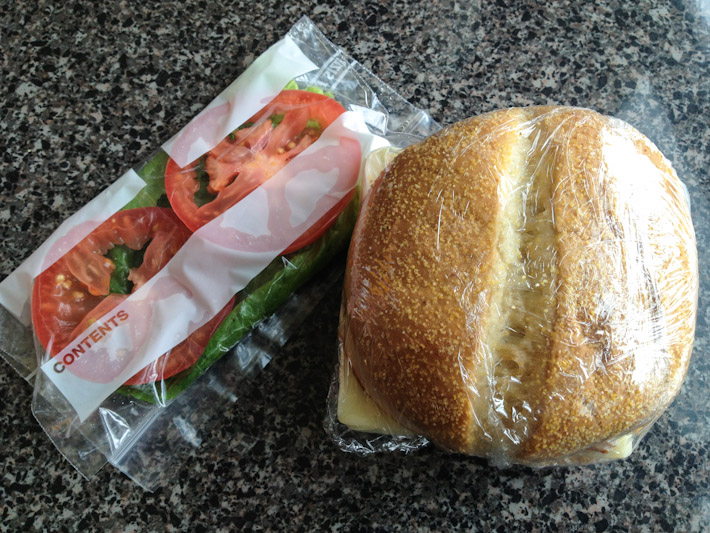 The cafeteria that sold this sandwich inside a National Park had a sign telling people to minimize the usage of straws to reduce waste. Still, they gave the salad that should be inside your bread, in a plastic zip-lock bag!

Places like the ever present Starbucks (that make it so extremely hard to have a no-chain cup of coffee in cities) NEVER serve you in a mug, even if your coffee is not “to-go”. This does not happen at Starbucks else where in the world. But here, it is the norm. Take-away glass of wine from a convenience store

At the supermarket you find all sorts of amazing products created to simplify people’s lives: huge sections of frozen meals, ready boiled eggs (because who has 5mins to spare to boil an egg an home, right?) or, my favorite, eggbeaters! Yes, the “eggs” are already beaten in a tetra-pack, so that you don’t have to tire your wrist when you’re in the mood for an omelette. Sometimes, it even contains real eggs – outstanding!! 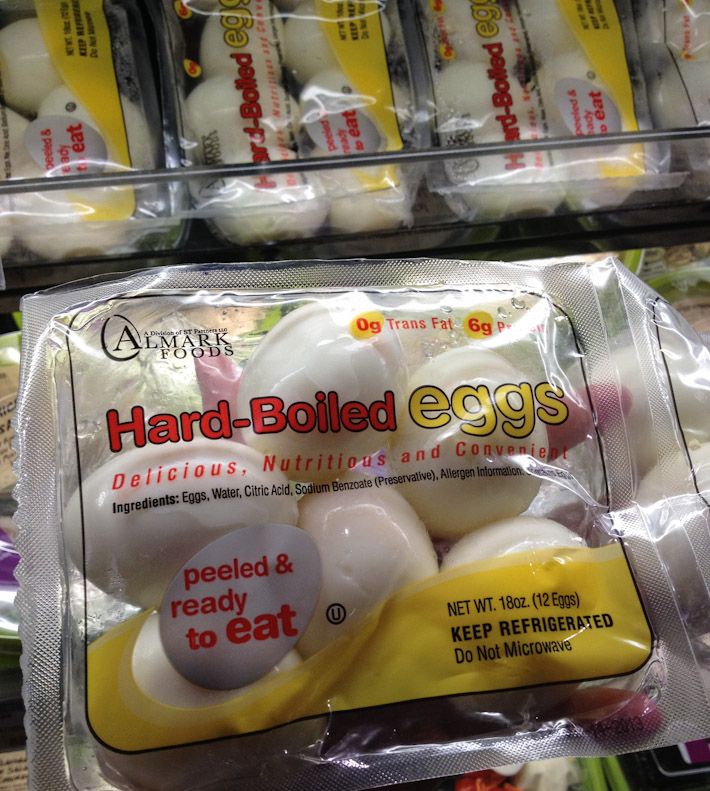 For when life is HARD.. literally!

For the modern-day omelette

I have nothing against convenience, but when it is in detriment of healthy and sustainable habits, then people should stop and think about what they’re doing. And that goes for water-bottle obsessed individuals too, who fail to acknowledge that tap water is safe to drink in most of their cities.

It’s funny to note that some of the food preparations commonly considered American, were actually created in other countries (burgers and hot dogs, for instance, have Germany written all over their calories). The USA is home to people from diverse backgrounds and habits, so this actually does a lot of good when it comes to food variety. Chicago style hot dog from a food truck in Portland. Portland and Seattle were our favorite cities food wise. 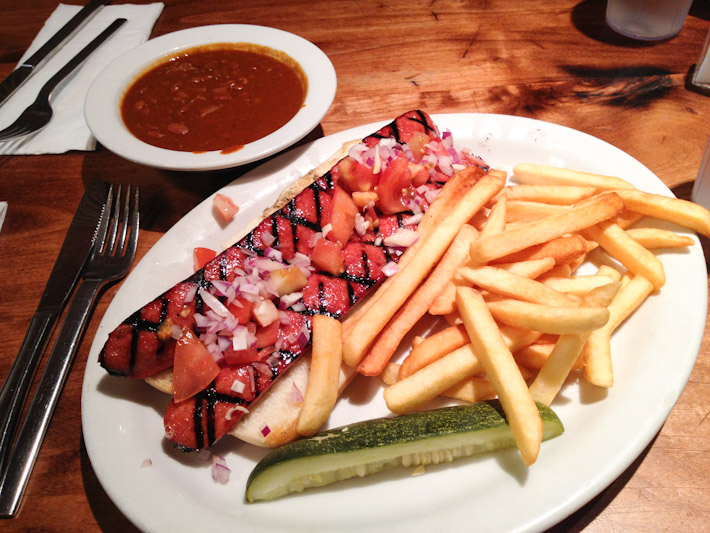 $14 dog at a regular diner in San Francisco. For that price I would have expected a German Shepard.. not a Chihuahua!

If there is something that the US does a lot and does well, that is beef burgers! Nowhere else in the world have I had such juicy and flavorful burgers. Claire Sinclair burger at The Stratosphere in Las Vegas 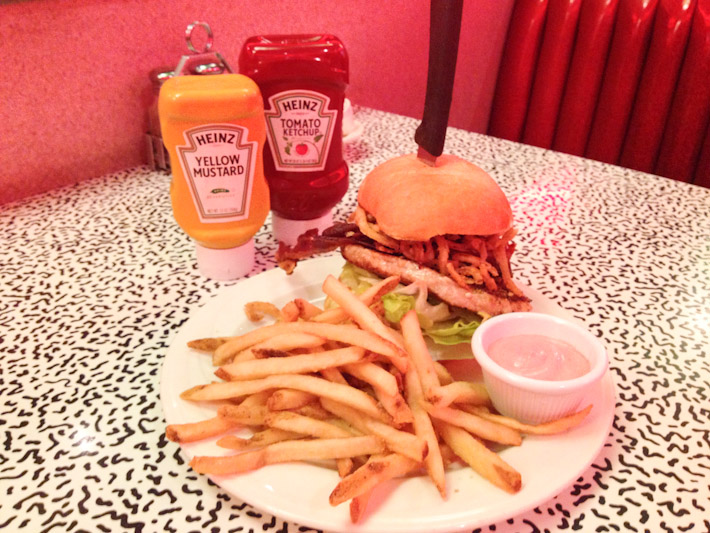 The problem is that, when you travel around small town America, you’re pretty much reduced to either beef burgers, beef sandwiches, beef steak or, when you get lucky, some chicken or turkey burgers.. and that does become tiring quite fast. Fries are, with no exception, the side order of excellence. So either you have a salad, which in most cases is not a complete balanced meal (not to mention unfulfilling) or you’re left with the extremely heavy options that will take a while to digest. 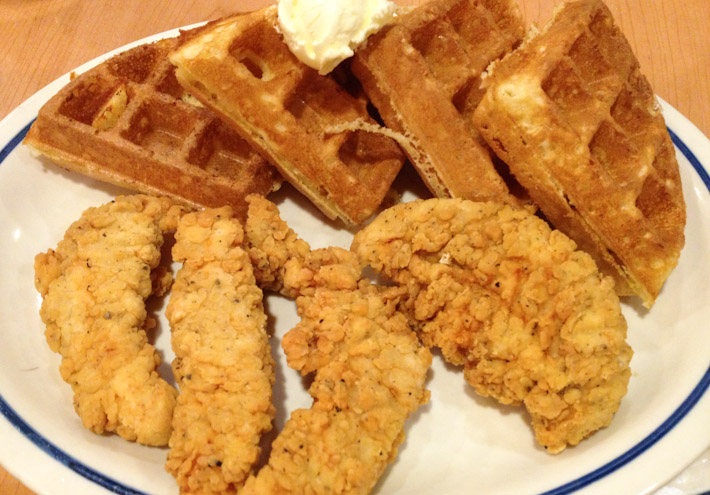 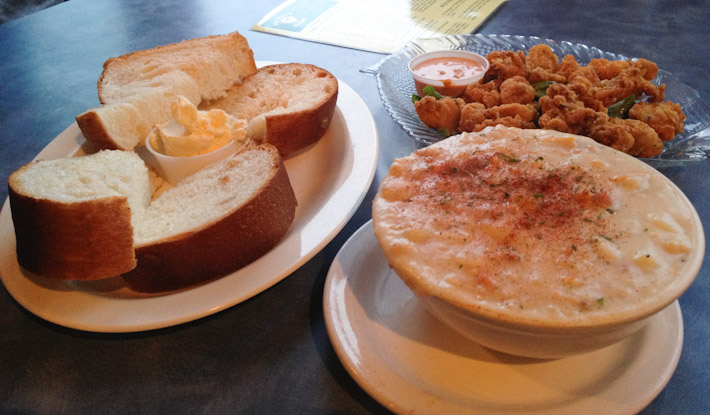 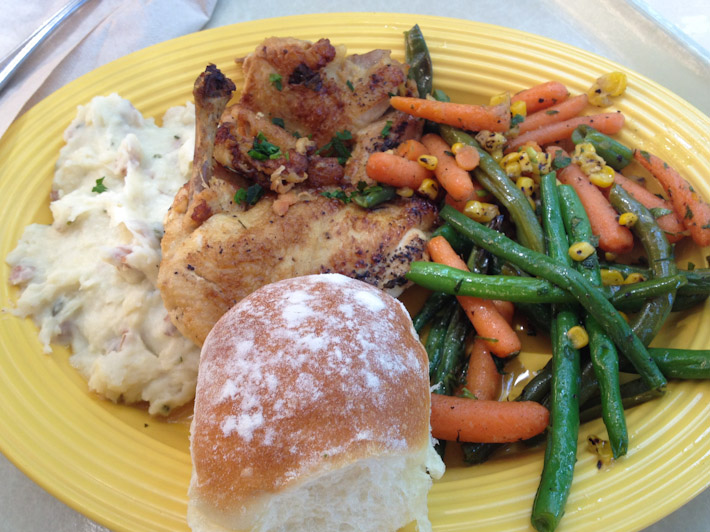 Really good Southern style chicken, mash and veggies – believe it or not, in Disneyland! $13.49

We found immigrant run places to generally be more budget friendly while offering good quality of food. In fact, we had a lot of memorable meals, specially those including Asian and Mexican fare. 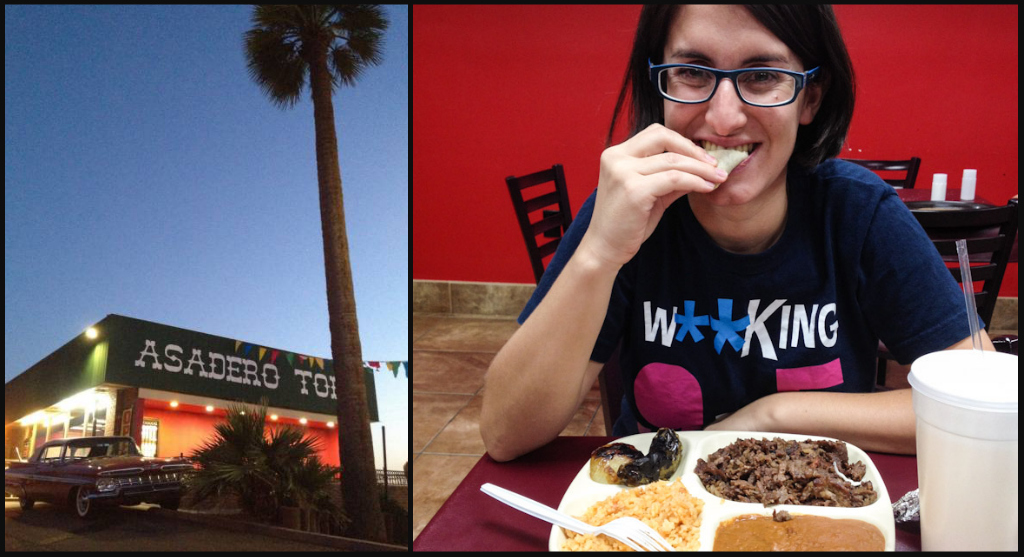 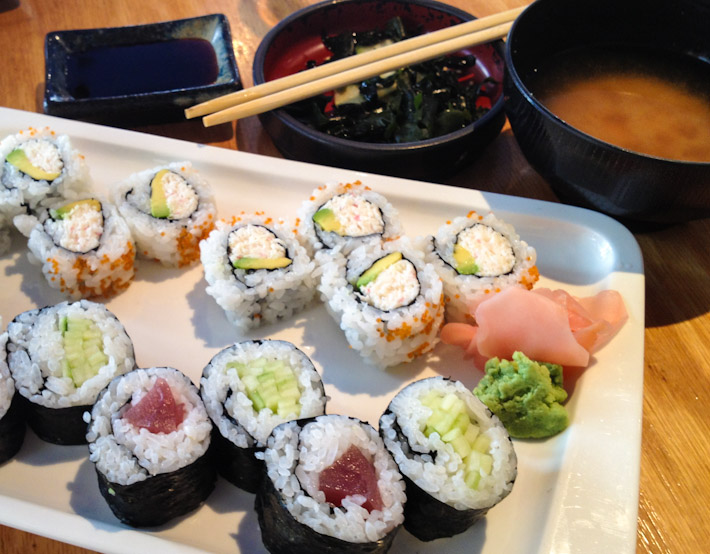 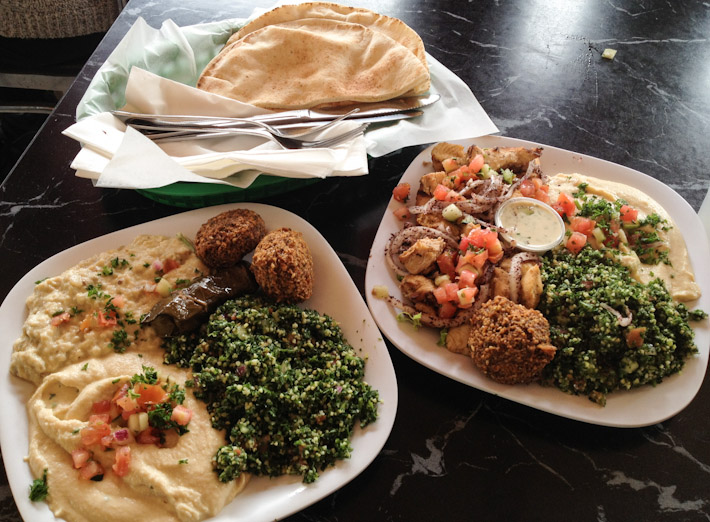 Middle-Eastern lunch in San San Francisco. About $15 for 2.

Indian drinks at Curry Up Now: self-serving lassi and chai in a "to-go" cup. 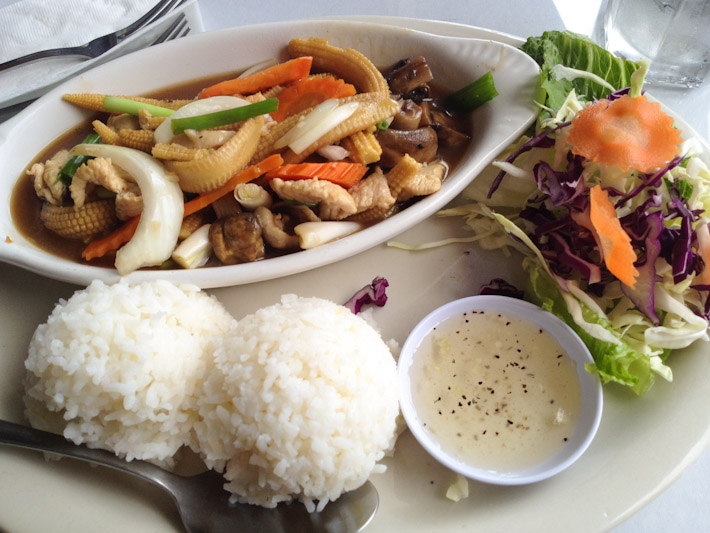 Chinese dish of the day, somewhere near San Diego. About $9

Memorable Vietnamese dinner in Seattle. Less than $20 for 2 Delicious Peruvian ceviche at The Mission District in San Francisco. Pricey one, about $12

There is plenty of good food being grown in the USA, but there is a lot of it going to waste too – a sin most developed countries are guilty off and that this TED Talk explains beautifully:

My views on food in the USA and the world couldn’t possibly fit in one article only. I just hope more people would enjoy food but do so with conscious of what goes beyond just the taste in a given moment: a personal and family acknowledgement of how the things you eat affect you (you truly are what you eat!), how you feed your children and how this will affect their lives. And how your food practices affect the world we live in too.

There is obviously a lot of good food in the USA: ingredients, dishes and, of course, restaurants. Still, on our travels, I can say we have a good eating experience in places where we generally get to eat well. In countries where we do not have do to “research” on best place to eat at, where we do not have to spend above average to eat a good meal. A country with good food is the one that offers decent meals at all price levels, on any given street, no matter if in the city or country-side. Where the most common food is good, wholesome food.