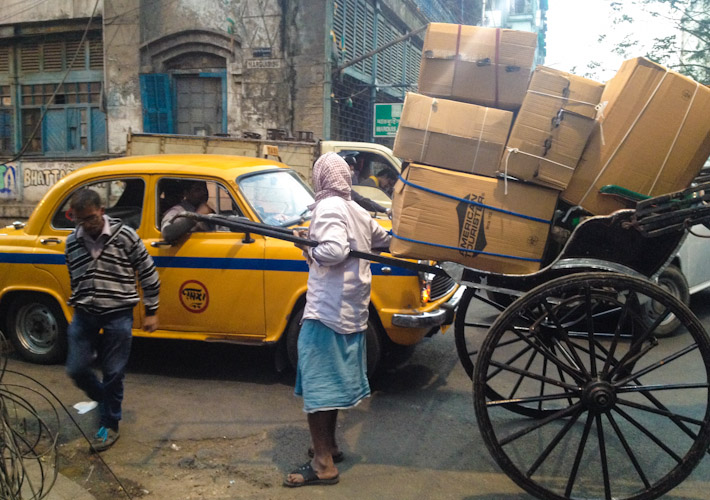 The Man-pulled Rickshaws of KOLKATA

In India, there tends to be a big gap between regulations and what really happens all around you. We could call that gap “reality”. Because reality and the harsh facts of life usually impose themselves over theories, ideologies and written rules.

Even though technically banned back in 2005, plenty of man-pulled rickshaws can be found in Kolkata. Downtown, men who for the most part look skinny and frail, use their physical strength to make barely enough to get by. The evidence of their impoverishment is not only evident in their own bodies and clothing, but also in the appearance of the transport they make a living with, which in most cases looks like it is from another era. The ban on man-pulled rickshaws in Kolkata came about due to the campaigning done by human rights organizations, who identified this mode of transportation as “feudal”. Interestingly enough, I read that rickshaw wallas (the men who pull these two-wheelers) don’t tend to find their job demeaning. In fact, they stick together under the umbrella of the All Bengal Rickshaw-Pullers’ Association, demanding that the government help them transition to other types of work (perhaps manoeuvring powered rickshaws), so that ultimately they don’t just end up with no livelihood at all.

This got me thinking… would it be worse to have this type of extremely hard job or, depending on age and skills, be left with no job at all? It reminds me of when I first arrived in India. I felt bad taking a bicycle rickshaw that would charge me around USD0.5 for over a kilometer journey. I didn’t want to have a body carrying my own body around. But I also didn’t want these guys to have no job at all, which is what would happen if everyone was to feel like I did. Even if we consider that there are other jobs out there… this is India! There are way too many people, and way too much competition. “Easier said than done” seems to have an even deeper meaning in this country. The photo at the top of this article was taken while we were walking the narrow streets between old-school Esplanade and modern looking Park Street in Kolkata. A man-pulled rickshaw, this time used for goods instead of human transportation, almost collided with a taxi. At this point, someone had to reverse, this often happens in old areas of Indian cities in order to make space to let the other person go. There is never room for two. One would think common courtesy would make the taxi driver reverse, letting the man who was in clear disadvantage go ahead. It would have been a matter of a few seconds. But instead, the taxi driver started shouting. The traffic got even more backed up in the meantime. Just like in some countries we get the feeling drivers on 4x4s or generally big cars act as if they are the kings of the highway, this taxi driver seemed to feel empowered as compared to the man who has to use his own two legs to pull his vehicle. Our group eventually interfered and the taxi decided to reverse and let the man-pulled rickshaw through.

If we’re going to be using rickshaws, bicycle or man-pulled, we should treat the men who work so hard with the dignity they deserve. While they’re still around, we should at least do that much.

What do you think of these types of rickshaws?