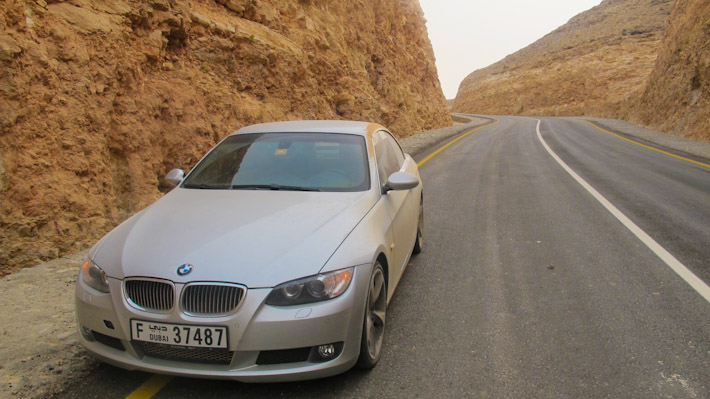 Once in Salalah, our plans boiled down to something as simple as enjoying the greenery. This might sound silly if you live in the countryside or even in a city where there are trees and gardens all around. As much as Dubai tries to keep its surroundings perfectly manicured and the petrodollars allow them to do so in an unsustainable (sometimes pretty) sort of way, nothing can replace raw nature. The desert has its charm, specially during golden hour, but months and months of dryness, sand and scorching sun all around, make you crave something green and fresh as if it was a luxury.

Thankfully, in Salalah, we got plenty of that… Salalah: as green as it gets in Oman Posing with camels in the background Camels in Salalah have it good! The coast around Salalah I guess we weren't the only ones doing a road trip…

Traveling in a conservative country with a non-family group involving males and females can be an eye opener to the culture of the place. In nicer restaurants in Salalah, we were often escorted to the “family room”, that is, a separate (and exclusive) room from the rest of the dining room. My looks wouldn’t make anyone wonder as long as I was inside those four walls… "Family room" at a restaurant in Salalah

… and Avinash didn’t seem to care as long as the food was good: Our chilling time in Salalah was cut a little shorter due to the adventures we had to go through to reach the wonderful oasis-like Dhofar province in Southern Oman. But we didn’t know the best was yet to come, as we attempted to drive back home to Dubai.

Our plan involved driving North but, before reaching the United Arab Emirates, stop one night near Ras Al Jinz, where we would visit a Turtle Reserve. We would have time to drive 1080 Kms up North, spend a night at a hotel, wake up early in the morning to observe how turtles nest at the beach, and move on towards Dubai for another 700 Kms. Yes, we are crazy. Yet all of that ended up happening, but as fate always rules with good stories you can laugh about later, it just wasn’t in that order whatsoever… The best roads to drive along in Oman are by the coast: incredible views!

Although we thought we’d reach Ras Al Jinz late, the fact is that the night came down upon us sooner than expected. That meant pitch black darkness all around us again. When you’re out there in the one and only road that crosses the desert, there’s nothing that can make you feel that you’re protected: no moon, no stars, no human sounds and no other cars crossing yours for dozens and dozens of miles. We stopped here and there to take creepy pictures (like this one) and even joked around the lines

what if our car stops again and we’re stranded here for the night? The night was as dark as this – you can't see anything around!

We noticed traffic warning signs that we had never seen before, like this: In ignorance, we even thought “sand dunes?? Yeah, of course there are sand dunes all around us… thanks a lot for the info!“. And that is when our stupidity flew away. Or better, it got propelled as we drove straight into a sand dune in the middle of the street! Turns out those signs warn you for the fact that the wind makes the sands shift and dunes actually get formed in the middle of the road. We didn’t crash. The car flew a little bit sideways, there was a lot of noise, shock, and then we stopped. We stopped for the worrying sight of the car that was leaking fluids at an alarming rate. Now, we were not joking anymore about the fact that we could indeed end up spending the night in the middle of nowhere. Freaking hot, desolated, unbearable nowhere.

There was only one thing we could do: drive as much as we could, until where we could, if we could. After driving by another semi-smashed car due to the same sand dune (with people from another car helping already), we managed to eventually reach the next town. In the middle of the night, there was nothing open and I ended up using the male toilet inside a mosque to relieve myself – I prayed to the gods I didn’t believe in that no man would enter while I was at it. We can’t forget this is the Middle East.

It was the middle of the night already and it was clear that we had wasted money paying for a hotel room by the beach, that was not going to receive our tired bodies any time soon. The car ended up leaking at some point, so we figured we could make it. The point now would be arriving to Ras Al Jinz Turtle Reserve before dawn, the only time people are allowed at the beach where turtles deposit eggs.

After a lot of frustration, we reached Ras Al Jinz about 5 minutes later than the appointment – the group was waiting for us to finally walk to the beach as the sun was coming up.

A glorious sight of family making turtles brightened up our morning: Walking at the beach within Ras AI Jinz Turtle Reserve After dropping the eggs, turtles proceed to cover their nest with sand. Interesting fact: turtle gender depends on sand temperature while the egg is incubating After nesting, turtles return to the sea And for a couple of hours we even managed to forget that we had driven more than 1000 Kms straight to be there!

Do you have any crazy road trip stories?