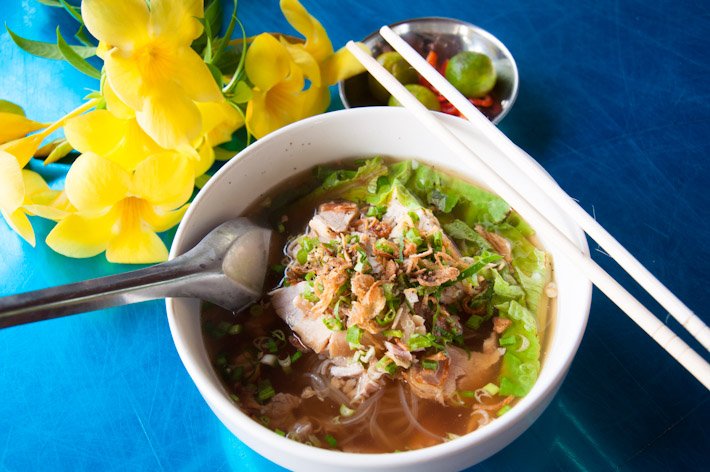 The BEST soup in the world!

This year, we have eaten a lot of soup. Being in South-East Asia for about 3 months, we have tried soups in Thailand, Cambodia and Vietnam. With rice, rice noodles, egg noodles, bean noodles, glass noodles, thick noodles… beef, chicken, seafood, pork or vegetables… spicy, sweet, sour or all of that mixed in at once! It is honestly difficult to get tired of soup in this part of the world, because more often than not, they are prepared not only to taste great but to also make your body feel good as you eaten them.

Vietnam has a long tradition of soup making, and that’s why many of us would have heard of the traditional Pho soup even before ever visiting the country. It was in Vietnam itself that we had one of the best soups we had ever tasted. It was, quite probably, the best soup in the world!

We had it for breakfast in the early morning, at a rice noodle factory (those noodles couldn’t be any fresher!) in the southern city of Can Tho. It was served with sliced pork, a variety of herbs and greens, a dash of chilli, a squeeze of lime juice and, to top it all up, a view towards the river as the sun was coming up.

Now THIS is what breakfast should always be like!