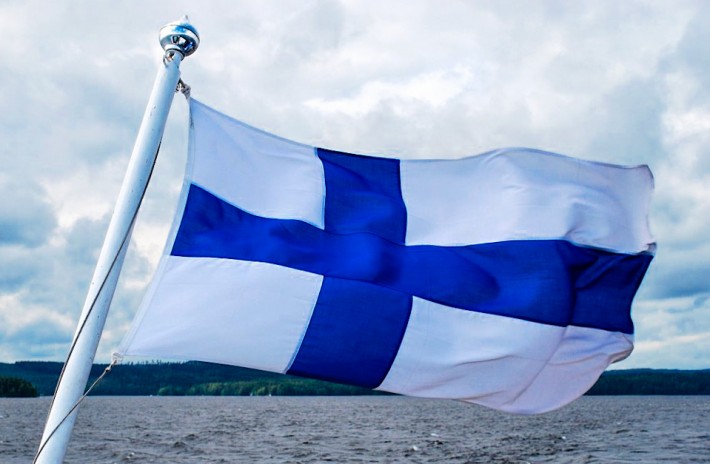 So I get off the plane in Helsinki at midnight on Friday, and I still have to find my way to Turku, Finland’s original capital and my home for the next six weeks. The way to the baggage claim and the bus stop is clearly marked, and the bus schedule is organized so that new buses meet incoming flights more or less, even those that arrive late at night, and even when there are few passengers. My bus arrives on time, but – get this – I realize I don’t have any Euros. What a bind, right? But the driver accepts credit cards, and I get to Turku right on time. This is convenient, because somebody from my program was meeting me at the Turku bus station, and didn’t have to wait around.

No? No good? Alright, alright – try this one. The next morning, I go to the student housing office with my Finnish teacher to get the key to my room. Walk in the door, look around – it’s clean, and the skylights allow for a huge range of indoor plants. There’s nobody else in the office, but my teacher presses a little button, receives a ticket with a number, and then waits for the number to appear on a little electronic sign before approaching a desk. So I say to my teacher, “what’s the deal with that?” Right? There’s nobody there, it’s perfectly clear that all three employees are available to help a customer.

So it turns out, the office does get busy sometimes, and when it isn’t, they still use the machine for statistical purposes. That is, from the read-out they can see how many customers they get, when the customers tend to come, and then the office can adjust work schedules accordingly.

It would appear at first glance that the Finns, in their pursuit of Progress, have successfully eradicated the funny from their country. I know that can’t really be the case, but my theory is that the funny must get more concentrated the closer you get to the Russian border. It’s like the radiation – they can’t stop it at customs, and they certainly can’t stop the Russians from producing it. I kept my eyes out for it the first day I was here, but all I saw everywhere were healthy people running back and forth in Finland-branded athletic clothes, on the correct side of the fresh paint on the smooth paths, avoiding the hazards marked with bright red and yellow poles, bathed in golden sunlight for the first and last four hours of each day. 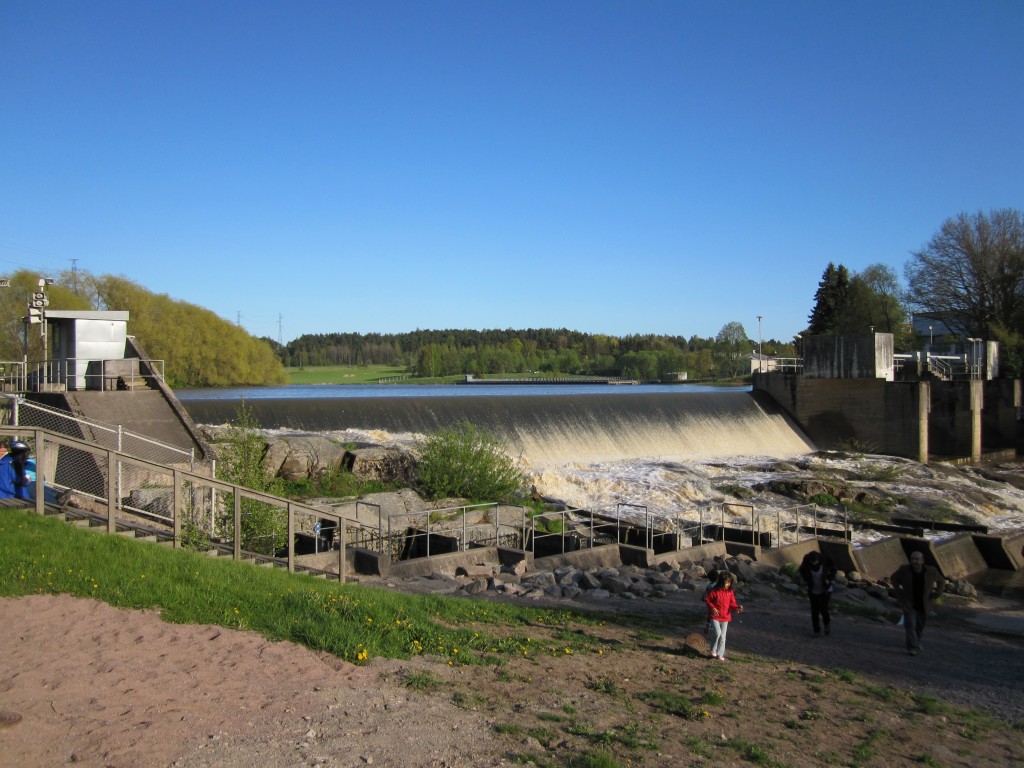 Downstream, more healthy people are fishing in an environmentally responsible manner, bathed in the same golden sunlight for the first and last four hours of each day. There are no police; rules became obsolete as the Finns lost all cause to break them, and both laws and law enforcement disappeared in tandem. At this point the street signs don’t regulate anything; they just describe what life is like: 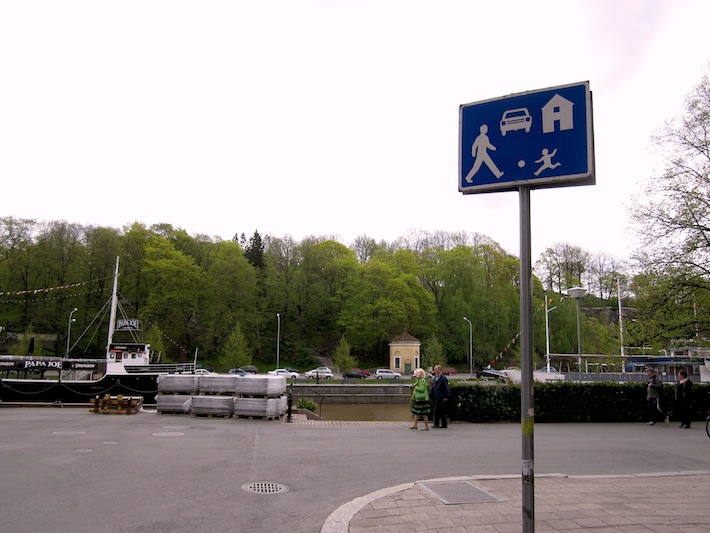 So if you’re like me, all of this raises the same question – how can anybody stand to live like this? I think the problem is economic in nature. It occurred to me when I noticed something peculiar at the mall, while looking for a prepaid cell phone. The stores are varied and fully-stocked, such that one might imagine there is trade. But when I needed help getting a phone out of the locked case, I noticed there were no salespeople. Then I looked even closer, and realized there were no customers, either. 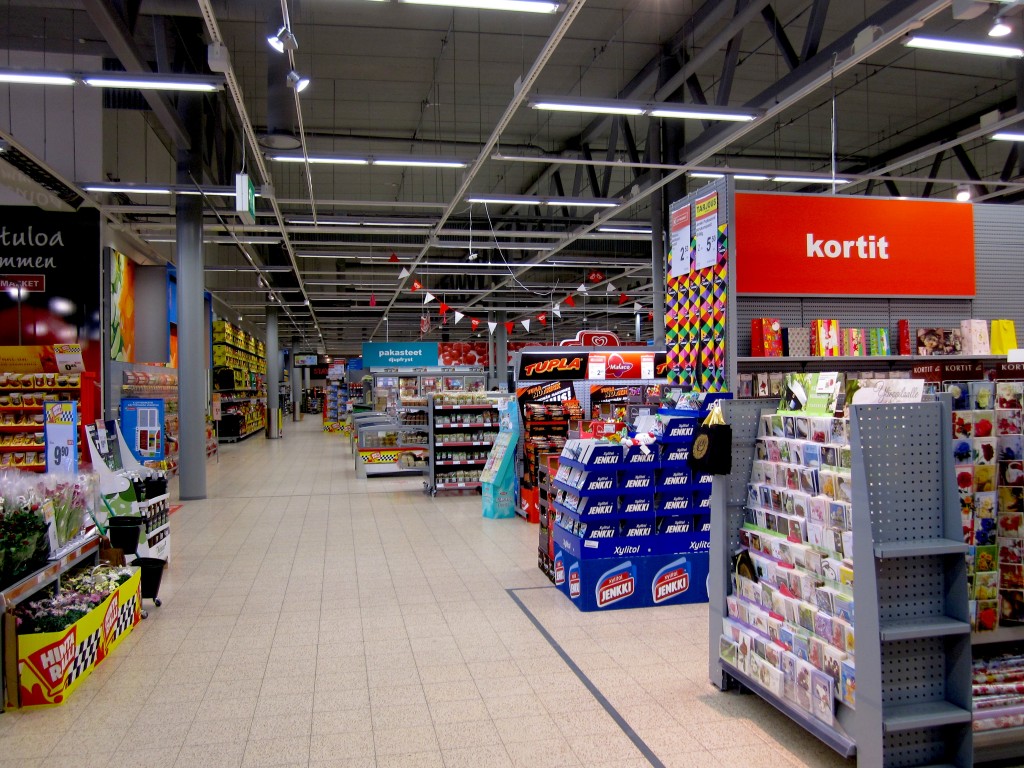 I think that the economy, like the country, runs so efficiently that people have been rendered superfluous. Goods move without human mediation, as if in some sort of economic perpetual motion machine. Flights land, buses move back and forth whether or not there are passengers, offices are empty but you take a number when you walk in, and the machine counts you for statistical purposes. And if you think about it, the machine’s ultimate goal is to someday render itself unnecessary. The Finns don’t dry their dishes – they have invented a cupboard with no bottom that sits above the kitchen sink, and the dishes dry of their own accord. Everything is working, but nobody is doing anything and nothing is happening. It’s a very peculiar place.

My first theory was that Finland had some massive influx of wealth at one point – perhaps the Nokia boom, or phenomenal worldwide sales of those cupboards – and then stopped allowing money out of the country, so that it might be passed around endlessly within Finnish borders. But any economist would tell you that’s impossible, because people drop coins where they can’t reach them, or sometimes lose their wallets entirely.

And what of the Finns themselves?

How do they cope?

It’s hard to say, and I will hopefully uncover the truth in time. One obstacle is that the Finns are famously silent, and will never speak without some sort of external stimulus. For instance, if a small Finnish town doesn’t attract foreign visitors, the lifeline of new words dries up and the entire population falls silent. If it weren’t for tourism in the bigger cities, the Finns would have gone completely mute when the last Russians withdrew in 1948. I’d be learning a dead language, something like Latin, but for elves. Now that I think about it, maybe that’s how the monetary problem is resolved, too – I had 120 Euros when I got here, and now I only have 30. Maybe the Finns know what they’re doing after all. This and other questions will be explored as my blog and the summer unfold.

And so, Finland seems a fascinating place, even if it couldn’t generate culture shock with a Finnish-made car battery.

JOSEPH KELLNER is a graduate student in Soviet and Finnish history at the University of California, Berkeley, and studied Russian language and culture in undergrad.  According to him, “the whole thing is just a scheme to visit cool places; don’t tell the history department.” On entries on his blog, Joseph looks in depth at the Finnish language, the city of Turku and its surroundings, the sauna, Finland’s rambunctious youth, any other destination he reaches, and anything else the world needs to know.

Share one of your travel stories with us too. Get in touch!