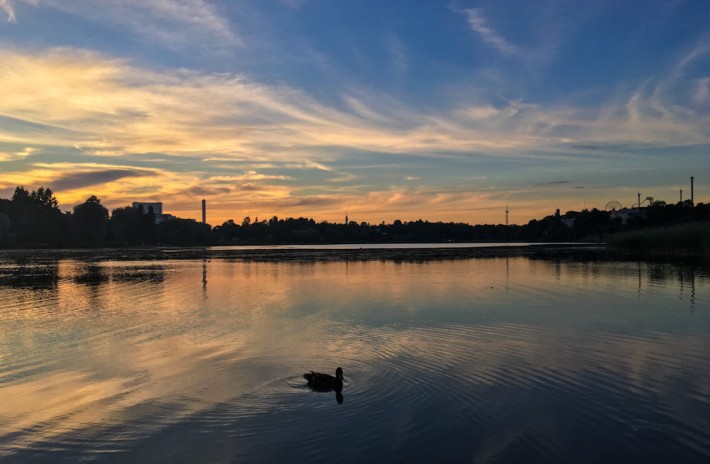 Fun Facts and Observations about Helsinki

Before we landed in Helsinki, the view from the plane made me feel like this was going to be quite an idyllic place. From up above, the sky was bright blue, the greenery was vast and the water seemed to have made its way in between any possible piece of land. But I had a feeling that the capital of Finland was going to be more than pretty landscapes. Once in Helsinki, we hopped on the bus towards the city center. The first question that came to my mind was: “Where is everybody?” This has got to be the most relaxed capital city we have ever set foot in. And it didn’t take us long until we started observing and understanding some of the quirks that made our trip to Helsinki a fun filled one!

Residents of Helsinki feel the need to

We visited close to Midsummer, a particularly beloved holiday of the Finns. Considering the sun doesn’t shine for that long in this Nordic country, it’s understandable that locals would want to celebrate the warmest season of the year. The funny part is that every family seems to be rich enough to have a cottage with a sauna in the country side. And they make sure they visit it regularly, to escape “the stress of the city”. What stress are they talking about? Helsinki just seems to be so extremely chilled out and it feels like residents don’t get it. So much that, while in Helsinki, I often fantasized about what it’d be like to have such stressed out folks just fly to Delhi and have them spend the summer season in the chaotic Old Delhi. The beauty of the midnight sun!

On a trip to Norway a couple of years ago, we experienced the Polar Night. 24hrs of different shades of darkness… but all pretty dark nonetheless. Here in Helsinki, we learnt that the Midnight Sun is indeed beautiful. Our curtain free Airbnb made it difficult to sleep deep between the midnight sunset and the 2AM sunrise. But the long lasting golden hour views (like the one in the featured photo on top of this page)f made up for it!

Finland and Asia have plenty in common! Somewhere in Asia… or Finland?!

Who would have thought Finns and Asians do their intimate cleaning in a similar way? If you’ve traveled in Asia, you’d know water takes preference over toilet paper when it comes to keeping it fresh and lovely down there. In Helsinki, we learnt that it is the same! As such, you’ll find “ass showers” in every bathroom. Thumbs up for this!

On another Asian related note, it is also customary to take off your shoes when you enter the house. Apparently, this has to do with the fact that Finns wouldn’t want to bring melting snow inside their homes. Even during summer, it seems like a good idea to feel those smooth wooden floors under your bare feet.

Public Bathrooms in Helsinki are amazing! Public toilet in Helsinki – notice the in use / free lights! :D

The municipality of Helsinki has installed several public WCs around the city. Even though they are present in mostly busy touristic spots, like Market Square by the water front, they are surprisingly clean. Even though you can read by the doors that 50 cents of Euro is the price to use them, they were free while we visited the city. And they always had toilet paper! When you are a medium sized Portuguese woman and you travel in the Nordic Countries, you know you will feel small. You won’t see the screen properly when you try to buy a ticket at the machine by the bus stop. You will barely be able to grab yourself on the handles while riding the bus either. And, what’s worse, you will stretch like Inspector Gadget when you try to grab the hand shower the first time you freshen up in Finland.

Street lamps hang all over the city No one on the streets… yet there are zebra crossings everywhere in Helsinki!

Considering how calm the streets of Helsinki are, I don’t almost see the point for the existence of zebra crossings. Still, I see they are ever present, almost as if there was an extreme need to organize the chaos of the city. Drivers also seem to be very respectful of pedestrians and stop meters away from the crossing when they see you approaching. You feel so at ease in Helsinki!

Jogging with Trekking Poles is a Thing Finns seem to be quirky even when it comes to sports. The first time I saw a 50-something walking in the park with the aid of trekking poles, I thought it was an age related thing. I was too quick to judge! Afterwards, we walked by people of all ages speeding by in style…

Also, yoga pants are in fashion around here. For sports or day to day wear, tons of girls in Helsinki rock those stretchy leggings like no one else I’ve seen before. Seriously… are there no curvy people in this city?! At least bees are fat in Helsinki. And I mean this in a polite way. A stroll around one of the many city parks will mean an encounter with bees feasting on colorful flowers. These bees are beauties and they make you wonder why their cousins elsewhere are not so abundant anymore. I am NOT paying this much for potatoes!

We knew Helsinki wasn’t going to be cheap. But almost 20 Euros for a Kg of potatoes is bananas! There were more affordable potatoes in the market, sure. But no potato should ever cost this much! But if it really has to, then it should be in Peru.

Tea Leaves for the win! Tea bags are NOT a thing in Helsinki.

If people in Helsinki seem to have very high standards for potatoes, the same seems to apply to tea. If you ask for a cup of tea in a cafe, you will not be served a cup of boiling water with a sad looking tea bag laying on the side. Instead, regular cafes brew a proper cuppa, made with loose leaves. So much nicer!

Are you sure you eat Meat? Bear meat in a can, at the market in Helsinki

You may reconsider if you truly are an omnivore in Finland. You don’t even have to go to the country side, to come across dishes featuring elk and the typical reindeer. In fact, you can even buy bear meat in a can at the market. All of a sudden, the omnipresent salmon seems truly appetizing.

The expression “on a student budget” makes no sense in Finland. Seriously. Not only is university free in the country, students also get housing and support from their government to cover general expenses. No wonder asking a 30 year old “what do you do?” often gets you the answer “I’m a student!” Student petty cash might answer why there are so many beauty salons in Helsinki. Either that, or people aren’t really blonde and they come in to dye their hair every so often. I have never seen so many hair salons in my life! I don’t have the exact stats, but I believe there isn’t one street in Helsinki without at least one hairdresser. That's right people of Helsinki… white chocolate is NOT chocolate!

It doesn’t take you long in Helsinki to understand that design and aesthetics are integral to Finnish culture. After seeing white chocolate everywhere, I’m starting to think that this chocolate preference has something to do with the fact that the color of the sweet matches their hair tone and their preference when it comes to clothing and furniture colors too. I kid you not: white chocolate desserts are featured in many restaurants and dark chocolate is hard to come by. And no… 47% doesn’t count!

If you are a fan of Game of Thrones, you can’t help but think of Daenerys Targaryan while in Finland. You wonder why in the 7 Kingdoms they had to cast a brunette British actress for this role, when every other woman in Helsinki looks like the Mother of Dragons!