Prepaid Mobile in the US (SIMPLE Mobile/T-Mobile review)

A lot of people wonder about how to get a prepaid SIM card while traveling in the US. Contrary to popular belief, it’s fairly simple! If you have an unlocked cellphone then you can buy a SIM card in the US and use it. You basically need to top it up with a ‘plan’. There are a few major networks in the US but the ones you’re most likely to run into are AT&T and T-Mobile. Then, there are some networks that are MVNO’s (Mobile Virtual Network Operators). What this means is that you can buy their SIM cards and plans but you’re going to be using the AT&T, T-Mobile, or Verizon network. They basically do not have their own network but offer discounted pricing on plans.

So what are the options ?

Network coverage in the US is amongst the poorest I have seen anywhere in the world. The only network with decent coverage is AT&T. During our road trip, I had bought a SIMPLE Mobile sim that for $40/month gave me unlimited voice, text and data (3G). However, as this works on the T-Mobile network, coverage was almost non-existent in many states. For example, in Salt Lake City, UT I could only get Edge coverage – really slow data speeds. Then, in all of Idaho, Wyoming, and Montana – I had ZERO coverage (no voice, text or data). The T-Mobile network is pretty much the absolute WORST network I have seen in any country in the world (even Tigo’s network in Bolivia is better, and they have high altitude issues there!).

Even when I did have network coverage, the 3G speeds would barely hit 2.5Mbps and the 3G signal is pretty poor. It’s still useful enough for checking emails, getting directions and uploading the odd photo to instagram. 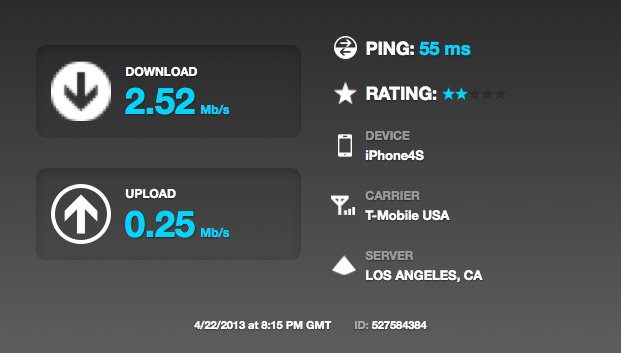 Now, with AT&T if you have an LTE phone then you could get 4G speeds (the same applies to T-Mobile/SIMPLE Mobile but good luck with getting a signal!). Make sure that if you sign up for a 4G plan, your phone is actually capable of working on a US 4G/LTE network (sometimes the frequencies differ).

In many remote places, although I could not log onto the AT&T network, I could go to “Manual Carrier Selection” on my phone and see that AT&T was available (eg. in Yellowstone National Park, Glacier National Park, etc). If you are going for T-Mobile or any of it’s MVNO’s make sure you take a good look at their coverage map. (notice the dark areas in Nevada, Wyoming, Idaho & Montana!)

It’s fairly easy to pick up one of these sim cards. You can buy them at many stores (Walmart, Target, etc) – however, it’s best if you walk into an AT&T store and pick one up. (I would strongly recommend AT&T if you are traveling anywhere remote..) You can buy the SIM card, activate it right there, and be ready to rock!

Top ups on my SIMPLE Mobile card were fairly simple. We were there for 2 months so I paid $20 for the simcard at a store in Hollywood and topped it up for $40 (unlimited talk, text and data over 3G). Then, after about a month, they sent me a text message when my renewal date was approaching and I was able to top it up again online. I did consider throwing away the SIM and getting an AT&T one but since we spent the last month in California I figured we’d have good coverage (I was wrong for the most part.. small towns in California also lack coverage but big cities – Los Angeles, San Francisco, San Diego – are okay).

So that pretty much wraps up this review. I was disappointed with the coverage with T-Mobile/SIMPLE Mobile but say you’re just going to Los Angeles for a month or to another big city with reasonable coverage, you’ll be fine with them. It’s just not the right choice for road trips! $40/month for unlimited data, text and voice is a pretty good deal. (if you get it directly through T-Mobile it costs $50 but comes with 4G usage up to 250MB and 3G thereafter)

Getting a pre-paid SIM card is really easy in the US. No documentation required, just pay for it and you can have it activated at any store. Preferably head to an AT&T or T-Mobile store. If you want a discounted plan – try one of the MVNO’s like Simple Mobile or Straight Talk and make sure you take a look at network coverage maps vs. where you’re headed!