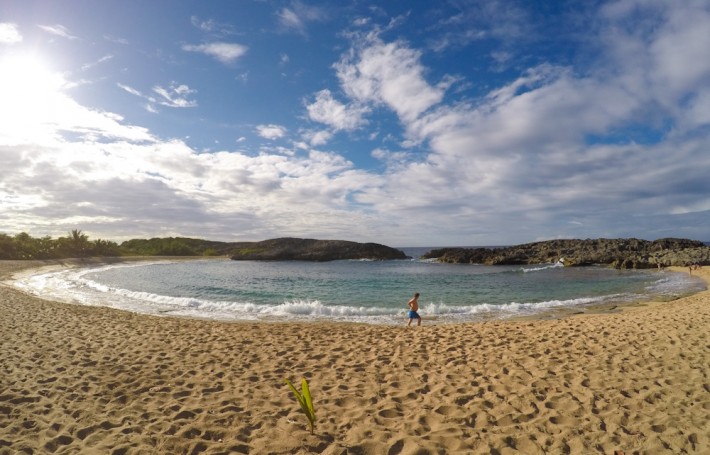 Puerto Rico has about 700Km of coast line, and is home to at least 300 beaches. Ranging from touristic spots to absolutely deserted areas you’d have to hike through the wild to get to, there’s certainly a sweet place for everyone in Puerto Rico!

After two weeks of living on the island, we’ve visited several beaches. And Playa Mar Chiquita is, by far, our favorite.

In Puerto Rico: from San Juan to Playa Mar Chiquita

We drove to this small beach on the Northern Coast on a Friday afternoon. This being a spot that mostly locals frequent, there was barely anyone in the early afternoon. But as the evening came closer, people finished up with their week’s work and started showing up at the beach.

Instead of being the stereotypical postcard perfect beach, with long stretches of white sand and an endless blue ocean, Playa Mar Chiquita distinguishes itself by the unusual shape of the bay that got formed due to years of erosion. What once probably was a wall of rock dividing the ocean from the land beyond, has naturally been carved by the waves until a half moon shaped “swimming pool” was formed. Here, the current is still rather strong, but comfortable enough to swim a little and splash around a lot. You can climb the rocks around the beach to observe the Atlantic Ocean towards the horizon, and appreciate the strength of the waves as they manage to crawl in between the rocks. If the tide isn’t too strong, it’s not particularly dangerous to climb the rocks, as the erosion has formed grooves almost shaped like steps, which you can comfortably walk up and down even in flip flops. Visiting on a Friday turned out to be rather ideal, because of the different vibes we got to enjoy in the span of a couple of hours. There’s no doubt that having a paradise like beach almost all to yourself feels privileged. But we enjoy the company of other people too, specially if they are as talkative as people in Puerto Rico tend to be. Because climbing and swimming made us hungry, we visited a beach shack that was blasting Latin music as loud as a cell phone & single speaker set up possibly could. This was enough to attract us there so that we could have some cold coconut water straight from the shell, along with pincho de pollo, that is, grilled chicken on a stick. While taking a seat, we were promptly invited by a group of local people to sit with them for a while. Half in English, half in Spanish, we shared stories about Dubai, India, Portugal and, of course, life in Puerto Rico. Juan, the welcoming man we got to speak with the most, said to us:

You see this beach shack we’re at right now? Well, they don’t make them like this anymore! This is what Puerto Rico was like 20 years ago. Now, this type of place is disappearing…

One more reason to love Playa Mar Chiquita, I thought to myself.

With incredible ocean views, chatty people and an overall “the simple life is the good life” atmosphere, Playa Mar Chiquita will be remembered as one of our favorite spots to chill in Puerto Rico!