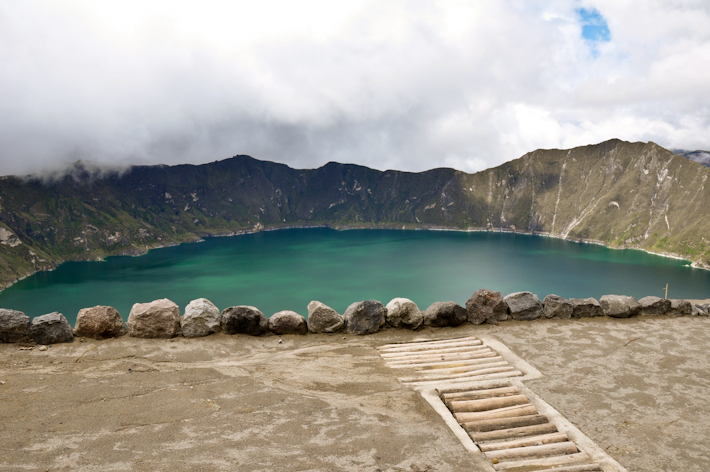 Our trip to Quilotoa and How to get there from Latacunga

We spent a lot of time looking online for info on how to get from Latacunga to the Quilotoa crater lake (Laguna de Quilotoa). Since we couldn’t find much info, I’ve decided to post our journey details here so that it’s easier for other travelers in the future.

Quilotoa is an active volcano in Ecuador and the crater contains an awesome emerald colored lake.

the views are out of this world! 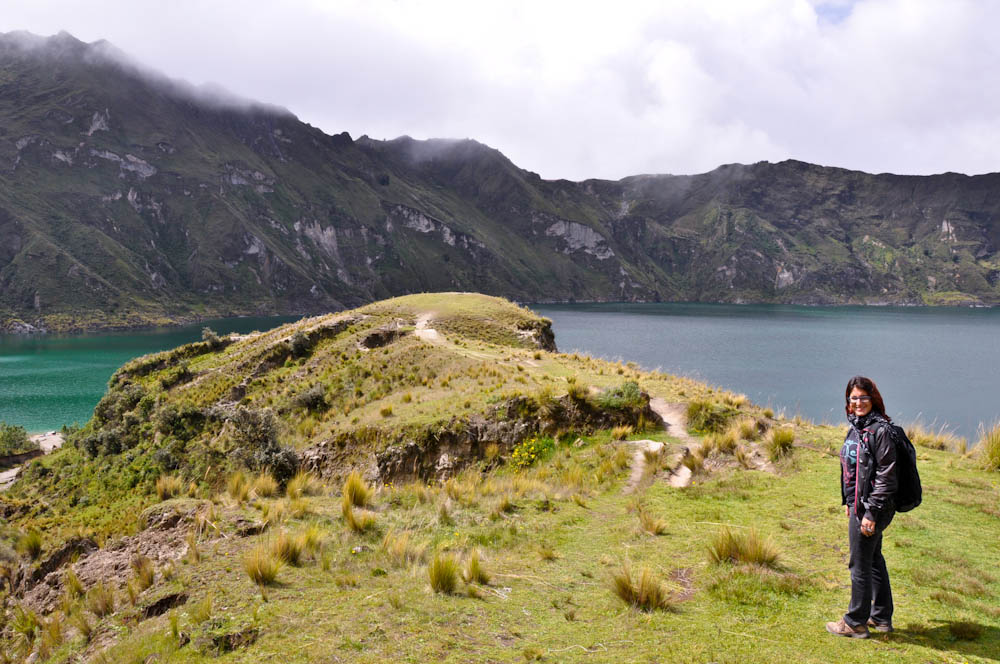 Almost at the bottom, a wonderful cliff!

Couple that with the fact that you’re inside an active volcano that might decide to blow up at any time and it adds a sort of irony to the calm atmosphere you’ll find at this lake.

Latacunga is a city about 2 hours away from Quilotoa. We were staying here at a place called Hostel Tiana. Our room was $15.50 per night per person for a double room with a private bathroom. It was a pretty nice place.

If you’re in Latacunga, there are two things that are really worth doing. One, is a trip to the Quilotoa Crater Lake and the other is a trip to the top of the Cotopaxi Volcano. Cotopaxi’s summit is at an altitude of 5000m+ and this means that you need proper acclimatization and mountain climbing experience (read: not for us :)).

We paid $1 for a cab to the bus station in Latacunga. We went there looking for a bus to Zumbahua, a small village about 15km from Quilotoa. However, there were bus drivers hanging around and one of them asked us if we wanted to go to Quilotoa. We said yes and he said it’d cost us $3 each and he would drop us off right in front of the crater lake. Funny enough he wrote a tiny little 6 on our ticket and handed it to us. (we believe the official price is a bit below $3 but it’s a small enough amount to not worry about :)). Interesting staircase in an Andean Village

The bus went through some extremely picturesque winding Andean roads (some of which were not paved yet). There were high mountains and green slopes set up against a backdrop of snow-covered peaks, many of which were volcanoes. We also went through some tiny Andean villages and eventually arrived in Quilotoa about 2 hours and 15 minutes later.

We had to pay $1 each as an entrance fee to the crater lake “area”. This place has plenty of hostels and restaurants so if you want to stay there, that’s an option. However, bear in mind that as it’s around 4000m high, you need to be well acclimatized otherwise you might get sick.

Of-course the views there were absolutely breathtaking! We walked down 400m to the side of the lake. The descent took us over an hour but it was well worth it! The lake is very calm and the area inside the crater is so quiet that you can hear bubbles forming in the lake (this is due to the volcanic activity at the bottom). There are some Kayaks for rent and mules that will take you back up for $8 a pop.

We wouldn’t part with $8 each for two mules so we started the rather breathtaking (remember, there’s only 60% oxygen in the atmosphere) ascend back up. It took us over an hour but at the end we finally made it! Hungry as hell we looked around for some place to eat. None of the places there had any grub any more. (it was around 5.15pm by now)

When we asked one of the locals when there would be a bus to Latacunga he said that there are no more buses. OUCH!

However, we were informed that we could pay $5 for a pick-up to take us to Zumbahua (the Andean village 15km from Quilotoa) and take a bus from there to Latacunga. Note that the pickup costs $5 regardless of how many people are in there. So make sure you split the costs :) (we didn’t do this and that was unfortunate). Buses run from Zumbahua to Latacunga until 7PM.

We took the pickup back to Zumbahua and grabbed some lunch. Lunch was a banana and potato soup, followed by a main course of roasted chicken with rice and salad, and some coffee. The cost ? $2 each! AWESOME!

Finally, we took the 6PM bus back to Latacunga. This time the bus driver charged us $1.25 each, quite a bit below the $3 we paid to get to Quilotoa ;)

After all the climbing we were pretty tired and took a nice nap in the bus. Soon enough (~2 hours) we were back in Latacunga and at Hostel Tiana.