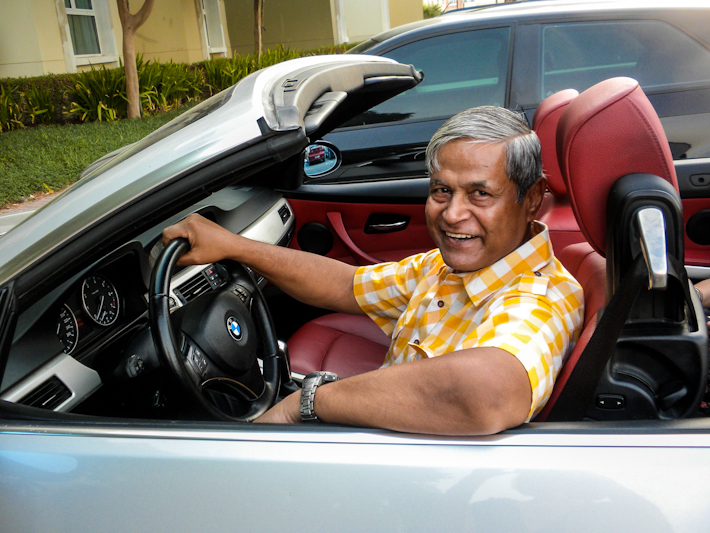 It’s been more than 2 weeks since we last posted anything on Backpack ME and, unfortunately, way too much has happened ever since.

I knew we wouldn’t be posting for a while as we were getting married on the 28th of February and we’re not the kind of bloggers who tend to schedule and automatize posts. We write whatever we feel like sharing, whenever it comes to us and we publish it pretty much right away, when it feels relevant.

We did get married a couple of weeks ago and were naturally busy before, during and after – I’ll tell you more about Indian weddings in upcoming posts and you’ll see!

But in the meantime, the saddest events have taken place in our family. Just 2 days after our wedding, Ashray’s Dad, Robin, got admitted into the hospital and ended up passing away a few days later. Just 5 days after such a happy occasion as our wedding, something so terribly sad happened. So much in so little time, and no time to digest it all. 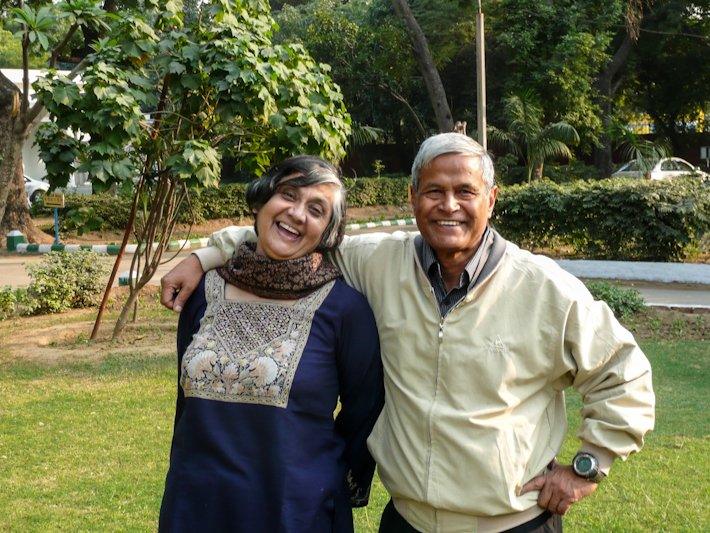 My father-in-law was suffering from a diseased called IPF: idiopathic pulmonary fibrosis. I thought it’d be relevant to share with you what happened to him, for the sake of awareness. Every year, as many people get IPF as others get breast cancer (for example) but the latter disease, or most kind of cancers for that matter, are much more well known when compared to IPF. The difference is that cancer can be treated with a possibility of overcoming it and IPF cannot. Pulmonary fibrosis is a progressive disease that affects your lungs and that, after a period of time, makes it impossible for you to breathe. Slowly but steadily, your lungs stop absorbing the oxygen that your body needs to live. And there is very little you can do about this. There is no effective treatment and you know you will end up dying (the average life span of an IPF patient is between 2 to 5 years after diagnosis). This can happen to anyone – true that people who live in an environment with air pollution or who smoke are more likely to get IPF, but it can happen to anyone, even young healthy people. Just like that.

We knew this moment would come sooner or later, but there are certain things in life one can never be ready for. As we were celebrating our wedding, we could have never imagined that 2 days later we would be in a hospital, facing the end. 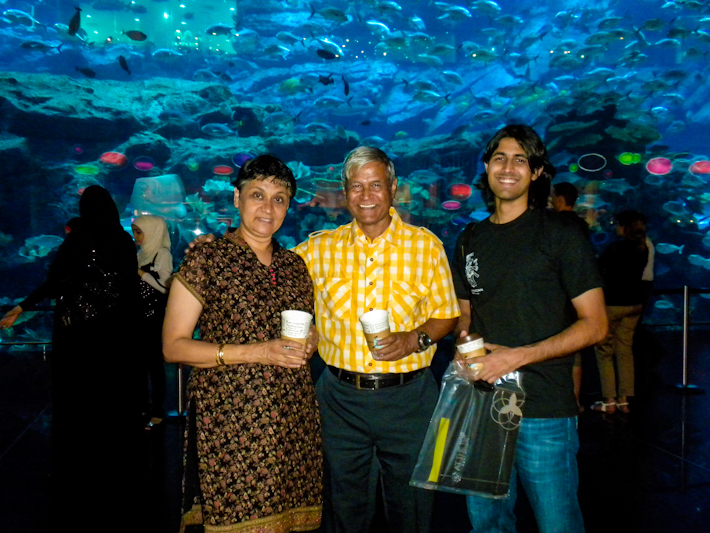 In Dubai, when I first met Ashray's parents

But not everything is sad and horrible, here. And that is the point of this entire post. My father in law knew for the past 6 years that he had this disease. He knew that, finding this out when he was only 57, he wouldn’t live to be a very old man. But knowing that he would eventually be leaving us all ahead of time, didn’t stop him from making the most of his time. As an Air Force pilot, a soldier, he had to be brave and he had to play it like team work: he wanted to take care of his family. He bought a house (where I am sitting at right now) and he wanted our wedding to take place as soon as possible. “I want to be able to stand at your wedding”, he said. He did. And man, was he happy! He stood and with a proud smile. He had taken care of the last things on his “to-do list”. 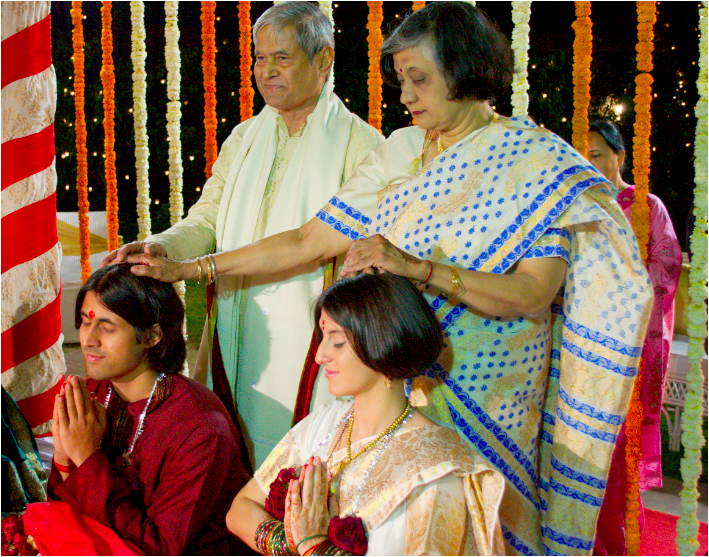 Receiving blessings at our wedding

And most of all: he traveled. In the last 5 years, my parents in law probably traveled internationally for leisure more than in the previous 20 years combined. And so he walked on top of the Great Wall of China. He took touristic shots in Australia with the Sydney Opera House in the background. He gambled the night away in the casinos of Macau, after making fun of how people get hooked to the slot machines. Marveled at the skyline of Hong Kong at night. Roamed around futuristic looking Singapore and the countryside of Malaysia. He visited the pyramids in Egypt. He came to see us in Dubai, where I first met Ashray’s parents. Had dinners with mariachis serenading them in Mexico. Shared humongous portions of food in the US, where they would “either get the kids meal or share one portion for both… so big!!”. And he even went snorkeling in the Mauritius, even when his breathing capacity was not in top shape anymore. 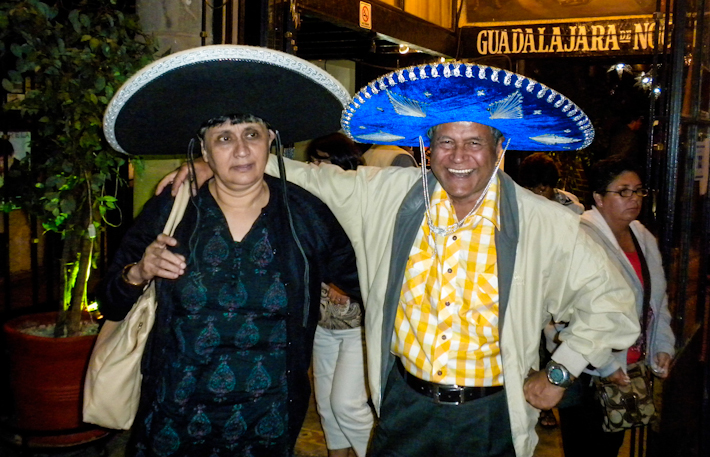 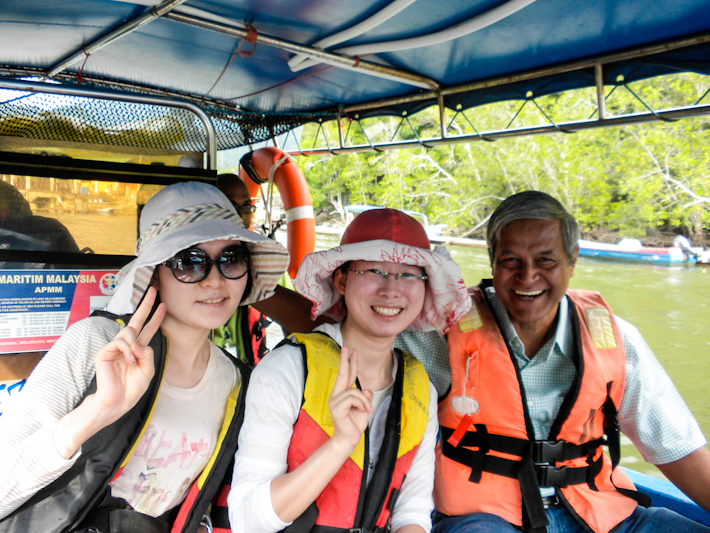 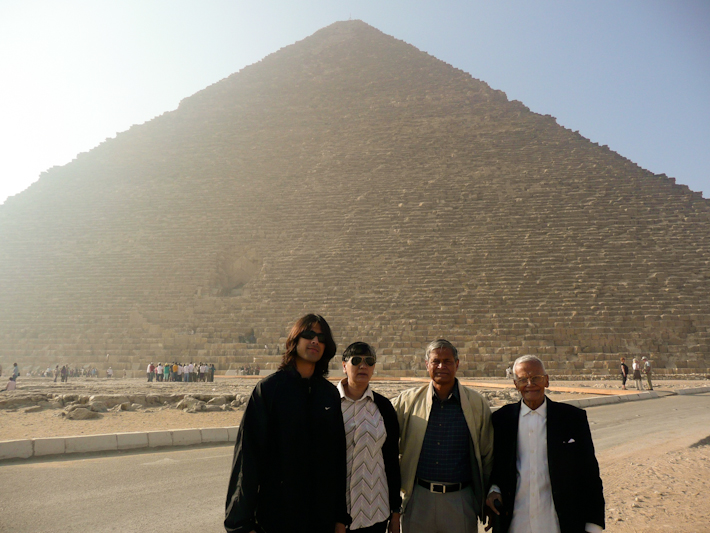 In Egypt: at his 92 years of age, this was Grandpa's first ever trip abroad!

Life is not about quantity – it is about quality. It sucks that one’s life is cut short. It’s bad for the one who loses his life and for the rest of us, who will miss the person who’s gone. But what would really be worse, would be to be seriously ill, knowing that you’ll end up passing away, and there is no time left to do the things you’ve always wanted to do! It is important to make money, have responsibilities and all that. But it’s not healthy to become dependent of your own job and your possessions, making it difficult for you to have the freedom to “just go and do”. Don’t leave all your dream travels for when you’re retired and “comfortable”. That time might never come… or your health might not be good! 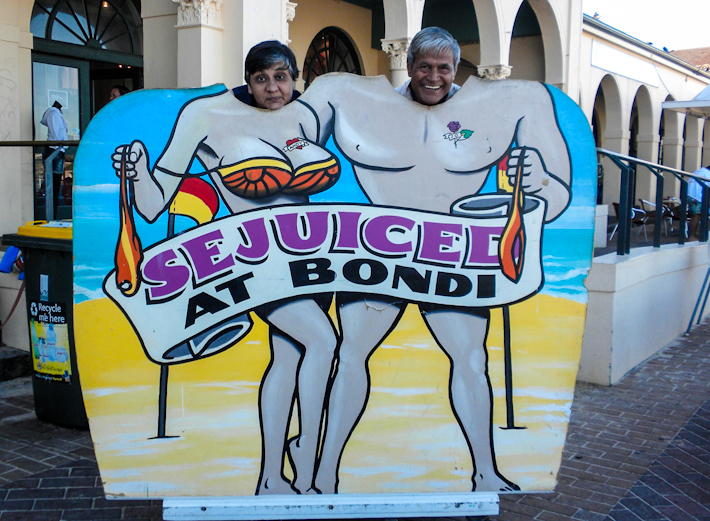 Always with a sense of humour 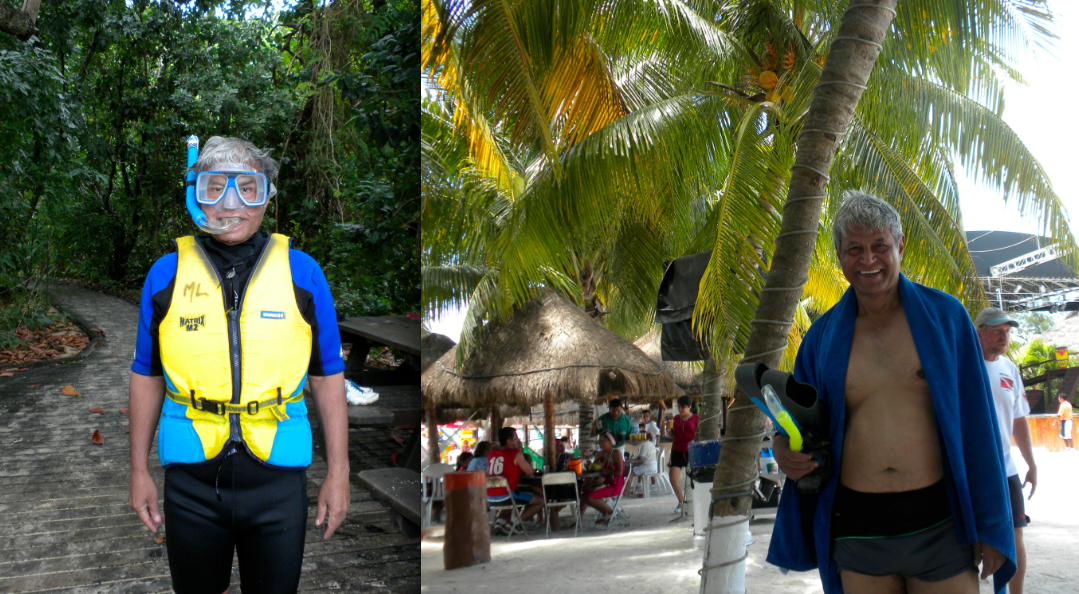 Ready to mingle with the Pacific Ocean fishes 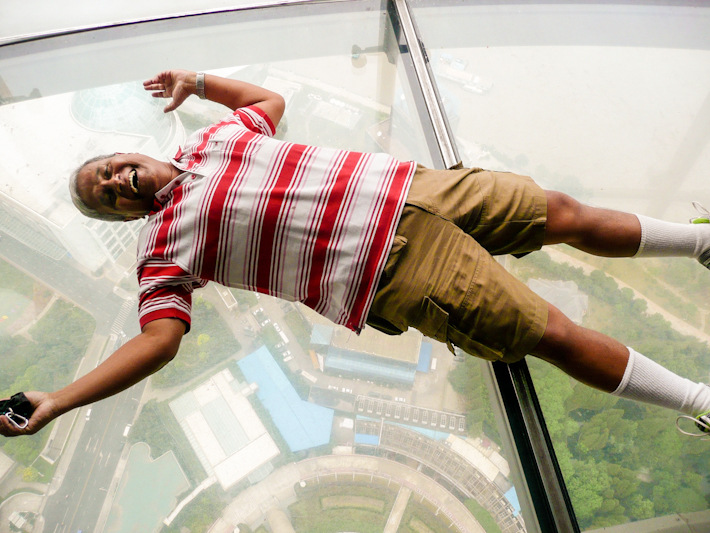 Way up high, in Shanghai

I think he understood why we had to travel full-time for so long. As a pilot who’s been around, he probably knew how different the world still is depending where you are. And getting to see and know more makes you a better person, a much more flexible piece in the puzzle that is this world. He used to follow our blog (same as the rest of our families) and that would make me proud (as well as sometimes slightly nervous when I’d use F words and the likes). He even got me the camera that I have now after I had my previous one robbed in Brazil. “I’m not giving it to you as such. It’s because I want to continue watching your videos”, he had said when I couldn’t almost accept such expensive gift. I knew from this moment that he kind of liked me and I am happy to know now that he left us with the reassurance that I will be by Ashray’s side, and also be a part of his Mom and Brother’s life, with whom I get along very well.

You never know what direction your life is going to take. So do as much as you can while you can. That’s what my father-in-law did and he set a great example for us. It would be rude not to follow it.