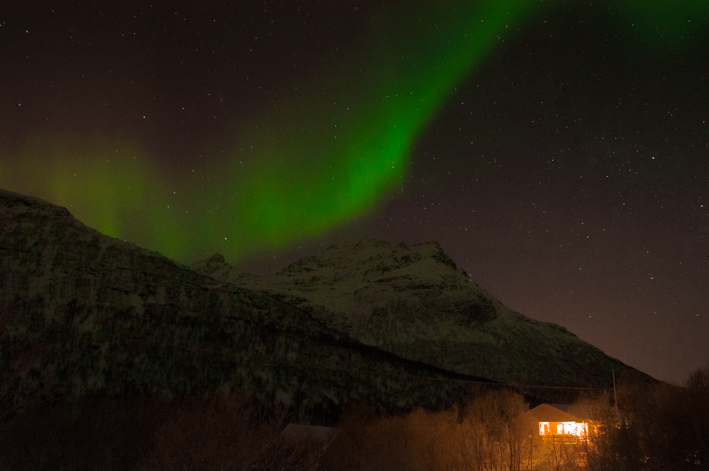 December 27, 2014 /Posted in Best of Backpack ME, Europe, Norway, Travel Smart /By Ashray

How to spot the NORTHERN LIGHTS on your own

The Northern Lights, also known as the Aurora Borealis are an absolutely stunning phenomenon. It’s a natural light show that takes place about 100km high in the atmosphere over the northern regions of our planet. There’s also the Aurora Australis which happens over Antarctica but as that continent is big and icy, it’s much harder to see.

It’s not yet fully understood why the Northern Lights actually show up, however, this makes them all the more magical. The little that is understood can be used to increase your chances of seeing a show in the sky.

There are principally four conditions that need to be satisfied for seeing the Northern Lights, so let’s dig deeper into them.

You have to make your way to some place in the northern latitudes. The Arctic Circle or close to it is the perfect viewing point. Tromso in northern Norway is a great place to see the Northern Lights. The northern parts of Iceland also make for pretty good viewing. Northern parts of Alaska and Greenland also work pretty well, but these are less accessible.

The Aurora Borealis can also be seen a little further south but this happens only when there is a geomagnetic storm caused by the sun. These are rare and your chances are affected by several other factors and thus it’s always better to head north to have a better view.

Although the Northern Lights aren’t fully understood by scientists yet, what is known is that they are caused by solar activity. Simply put, when the sun interacts with the magnetic field of the earth, the lights show up. This is partly why they show up at the poles.

It has to be dark. Although the best displays of the Northern Lights are pretty bright, they are also very high up in the atmosphere. Sunlight, strong moonlight, or background light pollution will definitely prevent you from seeing them.

Summer in the northern latitudes results in extended daylight hours (sometimes up to 24 hours per day depending on the location) and therefore it is almost impossible to see the Northern Lights during the summer season.

The best season in the Arctic Circle is from September-March. Unfortunately this means you’ll be braving cold weather and almost 24 hour darkness to see them, but it’s worth it!

However, between North America and Northern Europe, it’s almost always better to choose the see the Northern Lights in Northern Europe. This is because coastal regions of Northern Europe tend to have fairly moderate climate for the high latitude they sit in. As a comparison, Tromso in Northern Norway has never recorded a temperature lower than -18.4 C (-1.1 F). Even New York City can get colder than that!

Due to the warming effect of the gulf stream, coastal parts of northern Norway have a relatively warm climate. This is evident when you drive inland for about 10 to 15 Kms and it’s suddenly -25C!

Since the Northern Lights phenomenon happens in the high atmosphere, it is very important to have a completely clear sky. Of course, winter isn’t the best season for this but seasonal patterns are fairly consistent in the Arctic region. There are mostly two seasons: not so cold and very cold.

For Tromso, in northern Norway, it’s usually best to go after December as the initial winter months are quite cloudy. From late December onwards, you’re likely to have clear skies (on some days) and therefore better chances of spotting the northern lights. Spectacular View over a Fjord near Tromso

Just to recap, no matter what destination you choose, make sure you try and hit these 4 criteria:

- Northern Latitude: higher chances at lower solar activity levels
- Solar activity: solstices are better, you can check certain resources to know when to go
- Darkness: basically winter time so that you have fewer daylight hours
- Clear skies: if you decide to go hunting on your own, make sure you look for areas with clear skies

This basically means you can be in northern Iceland, Norway, Finland, or Sweden. There is a great website which is very comprehensive that tells you a lot about where to go and when. It’s called Aurora Service. Their EU website has solar activity levels and even real time sky cameras that show you what you can see right now from several northern locations!

There are also Kp numbers and predictions listed on their website. A Kp number is a measure of solar geomagnetic activity based on readings from several of NASA’s satellites. The number basically tells you how likely you are to see an aurora at a certain latitude. Low Kp numbers (0-2) means that you can see the aurora in the arctic circle. Higher Kp numbers mean that you can even see them all the way down to Scotland or further south, but this is pretty rare.

The Northern Lights in Norway

A great resource for planning your trip is yr.no which is the national weather website for Norway. You can switch the language to English and run cloud cover simulations at your location to see where you will be able to get a clear sky.

If you don’t want to bother with so much calculation, there’s also an app that tells you where to go and when to go. Visit Norway has an official iOS and Android app that takes into account the solar activity data as well as the weather data to tell you when to go out and see the lights.

Note that in Tromso, the Northern Lights are mostly visible between 6pm-2am so during this time, if you have clear skies and a dark night (winter), then you should be able to see the aurora provided you can get away from the city.

A note about photographs

Cameras are better at capturing the Northern Lights since they are capable of very long exposures and thus add all the light data they receive to make a brighter picture. The sensors in cameras are also more sensitive to certain light wavelengths and therefore capture weak signals better.

However, during times of heightened solar activity, what you see with your eyes is the same as what the camera can capture. So don’t settle for some weak show, the pictures in this post are exactly the same as what we could see with our own eyes.

It is, however a good idea to dial down the brightness of your mobile phone screen and camera display because our eyes take much longer to get used to the darkness than a camera. So if you’re going to be messing with your camera or iPhone while the light show is going on, you’re likely to see less than what your lens will capture anyway.

A note about temperature

Our Northern Lights hunt took us inland from Tromso. We had rented a car and drove around looking for darkness (luckily the sky was clear!). As we drove inland the temperature dropped from -8C to about -20C. That’s pretty cold and if there’s a breeze it will chill you even more!

We decided to drive around until we got to a dark place and then stayed in the car (keep the engine and heat running) until we started seeing something. That’s when we got all excited and got out with our cameras, etc.

After a few minutes we got back into the car and drove some more to find other dark spots to see the lights from. It also gave us an opportunity to stay warm.

So to distill it down here’s what you should do for maximum chances of seeing a great light show in Northern Norway:

- Go North, as far north as possible (Svalbard is even further than Tromso but it’s way colder!)
- Go in winter, you need darkness
- Check the weather forecast for clear skies
- Check solar activity levels online
- Go out to see the lights when the sky is clear and solar activity levels are high
- Make sure you cover up appropriately because it can get very VERY cold!

The other option is of course to take a Northern Lights tour. These are also not always successful since they too need the same criteria to see the lights.

We saw the best lights driving from Tromso to Laksvatn along the E8. This is a route several tour companies take and they go all the way to Skibotn and beyond if required. But the best thing to do is to rent a car for a few days, and go out whenever conditions are right, in terms of cost it works out to about the same and your chances of success are much higher since you can go out on multiple days if conditions aren’t right the first time around. Here are a few locations that Pangro from flyertalk forums threw together.

All in all, it takes a little planning and a little luck to see the Northern Lights – even at high latitudes. But with the right planning, you will be treated to one of natures’ most spectacular shows! Stay a few days and enjoy the Arctic, the pristine wilderness is perhaps one of the last frontiers in the world yet untouched by modern mankind.